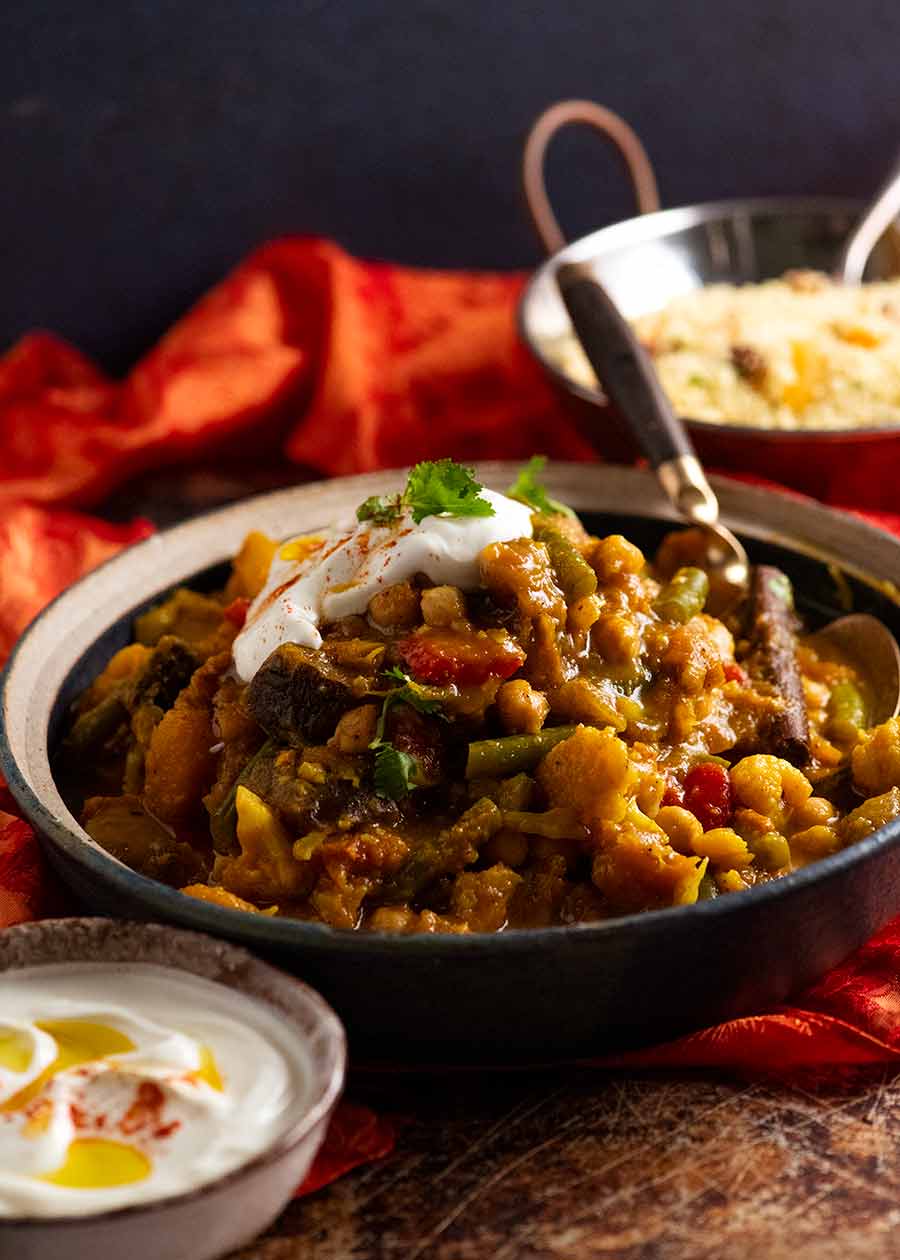 Vegetable Tagine is a vegetarian Moroccan stew loaded with heady warm spices. Make this with any veg you have – just don’t skimp on the spices!!

Last week, I asked readers what type of recipes they’d like to see more of on RecipeTin Eats this year. The themes in demand were clear – more meat free, more low calorie, more low carb.

BUT still insanely tasty of course! And if it could be made in one pot, be super easy, super quick that would be just dandy.

Though I wouldn’t classify it as super quick, calling for a good 45 minutes cook time to make the vegetables tender and absorb all those wonderful flavours, it’s certainly very easy.

So – this is the first recipe I’m delivering pursuant to reader demand!

Traditionally, Tagine is made in a tagine, an earthenware cooking vessel with a pointy cone shaped lid so that steam circulates inside as it cooks, then flavoured condensation drips back down into the tagine.

When you see the load of spices in this, you know you’re in for a flavourful dish. But isn’t it nice that they’re all everyday spices you can find at the grocery store?

While this has a generous amount of spices in it, it’s not the kapow! flavour like you get in Indian curries. It’s more of a warm spice mix.

The cayenne does add a touch of spiciness, so just skip it if you don’t want any heat in it at all!

And here’s what goes in the Vegetable Tagine. This one’s all about using what you’ve got, so don’t be concerned if you don’t have all the vegetables!

Here’s what I used:

How to make Vegetable Tagine

A key step here to extract the most flavour out of the vegetables is to pan roast each vegetable individually to get some colour on them before simmering with heavily spice doused liquid. Because after all, as I always say, colour = flavour!

I love how the broth is naturally thickened by the vegetables that are soft cooked so they ever so slightly disintegrate into the sauce. Flavour, flavour, flavour!

What to serve with Vegetable Tagine

For a traditional experience, serve with couscous. I’ve put the post up separately as it’s a handy quick no-cook side dish for many dishes, not just Morrocan or Middle Eastern.

With all the flavours going on in the tagine, a plain couscous would be just fine, but I’m not one to say no to a sprinkling of fresh herbs, or dried fruit and nuts!

I’ve also added a dollop of yogurt, a nice cooling creamy touch that compliments the heady combination of spices nicely. A sprinkle of predictable coriander/cilantro and a pinch of cayenne pepper for a dusting of extra spice. Because, well, why not? 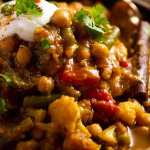 Recipe video above. A vegetarian Moroccan stew loaded with heady warm spices, filled with tender vegetables. Make this with any veg you have – just don’t skimp on the spices!!

Pan roasting each vegetable to get a bit of colour on them before simmering is worth the effort to get the most flavour out of the vegetables. Because colour = flavour!

1. Vegetables – you can really use any vegetables you want in this recipe. It’s intended that most of the vegetables are cooked until tender – only the green beans are added later to preserve some of the green colour.

It’s also intentional that cauliflower and pumpkin sort of start of breakdown a bit – this actually acts as a natural thickener for the sauce.

2. To add chicken – I’d use a couple of teaspoons of the spice mix on bite size chicken thighs plus oil, salt and pepper. Sear before tomato, once browned on outside but still raw inside, add tomato, proceed with recipe as written. YUM.

3. Storage – keeps 5 days in the fridge. Gets thicker and chunkier – I think it’s even better on Days 2 and 3! Spritz of fresh lemon juice will help lift it, the longer you keep it.

Can also be frozen for up to 3 months – thaw overnight in fridge then reheat preferably in freezer (excessive stirring on stove can make veg breakdown too much).

4. Nutrition per serving assuming 8 serves, tagine only (ie no couscous) and no toppings. This really is so full of flavour it can be served like a really hearty stew-soup, just by itself.

Really doesn’t like his daily post-beach showers. Kind of ironic, isn’t it, that he spent the last hour swimming?