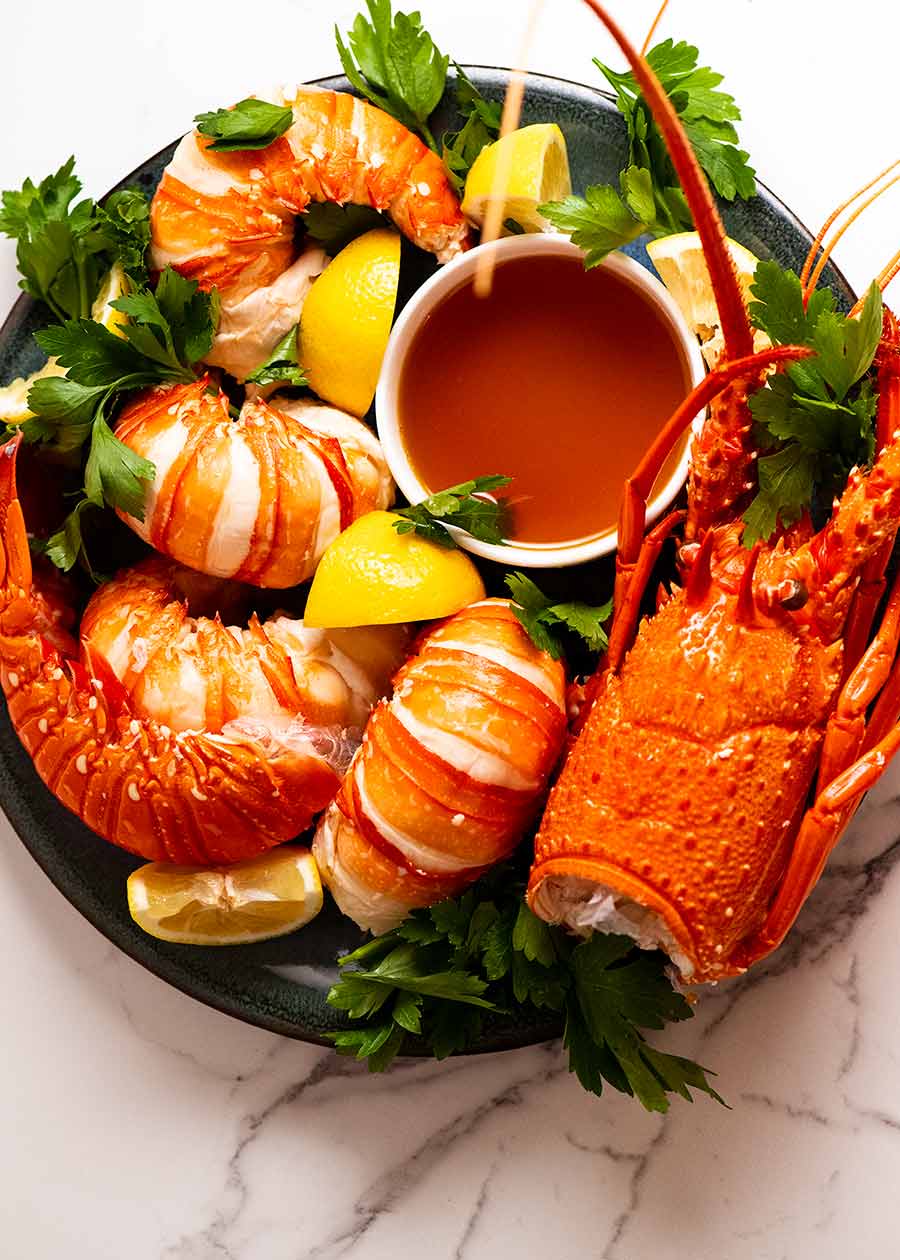 If you snapped up some of the steeply discounted cooked lobsters sold at Australian supermarkets in the lead up to Christmas, here are 6 Christmas-worthy last minute lobster recipes you can make with them. I’ll also show you how easy it is to remove the lobster meat from the shell!

Rounding off a crazy year, Australian grocery stores have been selling lobsters at steeply discounted prices in the weeks leading up to Christmas due to trade tensions with China. (Read more below.)

If you’ve been lucky enough to pick one up, here are 6 Lobster recipes you can make with them. All easy – and you’re likely to have everything to make at least one of these, if not two or three!

These are COOKED lobster recipes

This post specifically contains recipes for cooked lobsters and crayfish, not raw, because the discounted lobsters that spurred this post came cooked.

There’s a broader variety of preparation options for raw lobster which are not covered in this post.

If you buy lobster already cooked, it’s best not to cook it again to preserve the flavour and not risk overcooking it. It is a plain fact that freshly cooked raw lobster is juicier and has better flavour than buying one already cooked, a factor that contributed to the steep discounts.

So the range of recipes that pre-cooked lobster can be used for is more limited.

In order to retain the best lobster flavour, do not cook it and do not overpower it with strong sauces or garnishes. Just serve it with a simple sauce – such as a garlic butter sauce or Rose Marie Sauce. Plate it up shared style on a platter, or as an elegant individually plated starter!

My biggest advice: keep it simple. Lobster meat is wonderful as it is. It doesn’t need anything more than a simple sauce!

Here are the recipes I’m sharing today. Most reference sauces from other seafood recipes on my website, so you can be confident they are already tried and tested!

Almost any seafood sauce you would ordinarily serve with seafood will work well with lobster. Here are 3 classics plus our family favourite that I use as Prawn Dipping Sauces (ie alongside giant buckets of cooked prawns!):

You can buy all these sauces at the grocery store. But they pale in comparison to freshly made!

If you’re thinking hey, that’s prawns in the photo not lobster!, you’re right! The photo below is Prawn Cocktails and lobster makes an outright perfect switch for the prawns in the recipe.

This is a good, easy idea for elegant, individual starters.

A good easy one you just can’t go wrong with! Melted butter, garlic, lemon and a good hit of fresh parsley.

To serve: Drizzle generously over sliced lobster, and also serve in a small bowl so everyone can help themselves (or dunk!). For individual plates, serve it like the Lemon Browned Butter Lobster pictured below.

TIP: Make sure to provide crusty bread. All the lobster juices and butter makes for a very good bread-plate-mopping situation!

Called Beurre noisette in French, this is a brilliant luxurious sauce for all types of seafood and is a very popular sauce recipe used for fish. The reason it’s so good is because it’s not just melted butter with lemon, it’s browned butter which has a much more intense, nutty flavour than plain melted butter.

Plus, the intense golden yellow colour is stunning! And to think this is just made with two ingredients – butter and lemon! (It’s all in the method)

How to serve it: As above with garlic butter, drizzle and also provide extra for each person to spoon over as much as they want.

TIP: This is a good one to use if you want to plate up individual start-size plates, such as pictured at the top of the post. It looks elegant because the butter is a more intense yellow colour than just normal melted butter, and as mentioned above it’s a bit fancy pants Frenchy.

A green sauce made with finely minced fresh herbs mixed with olive oil and a little garlic, this is spectacular with most seafoods, from cooked fish to grilled prawns, and most certainly for lobster.

How to serve it: Platter style for sharing, with a bowl of Salsa Verde for people to help themselves. Or the lobster sliced into bite size pieces with Salsa Verde drizzled over it, served as individual starters – as pictured above.

Cooked lobster is suitable for making lobster rolls, a New York favourite comprised of shredded or chopped lobster in a mayonnaise sauce stuffed inside soft rolls.

While I am including it in this list, I myself did not make it with the discounted lobsters in question because I found that the lobster flavour was not good enough. It would get lost in the bread, and frankly be a waste.

However, because it’s such a classic use of lobster, I’m including it in my list. The photo featured above is from this Mini Lobster Rolls Recipe by Gourmet Traveller Australia.

TOP TIP: Don’t make this recipe unless you have freshly cooked lobster. This does not include the discounted lobster currently widely available in Australian supermarkets!!

No lobster mornay? No Lobster pasta??

There are some great classic lobster recipes that can only be made with raw lobster. So in this section, I cover off on why they are not suitable to make with pre-cooked lobster.

As mentioned above, the lobster flavour, tenderness of juiciness of the meat is not as good with pre-cooked lobsters compared to freshly cooked raw lobsters.

This limits the uses of pre-cooked lobster compared to raw lobster which can be used for a much wider variety of such as pastas, lobster bisque and Lobster Mornay, to name a few.

If you just tossed lobster meat into pasta or a soup, you would only get lobster flavour when you bit into a piece of meat – and it’s dispersed throughout. So to make a really good, say, lobster pasta, you really need the lobster flavour in the sauce to coat the pasta, and to achieve this you need to start with raw lobster.

How to remove shell / meat of lobster (crayfish)

Around 95% of the meat in lobster is in the tail, so that’s all we need to remove. It’s not difficult to do with cooked lobster here’s how:

1. Insert knife between head and tail – insert a small knife in the gap between the shell where the tail and head meat on a 45 degree angle, almost scraping the inside of the shell of the head;

2 Cut through the flesh along the top and side of the lobster (no need to cut all the way around);

3. Twist off tail – then give the tail a twist and it will separate from the head. A good chunk of the meat from inside the head should be attached. If the meat has yellow and black bits on it from inside the head, just scrape or cut it off. The yellow stuff is called tomalley – or “mustard” – as has intense lobster flavour…. but it’s an acquired taste. I don’t eat it!

4. Cut underside with scissors – flip the tail upside down so the soft shell is facing up. Then cut down either side so you can peel it back a bit like opening a can of sardines!

5. Loosen meat – just use your hands to loosen the lobster meat from the shell. It comes out easily and neatly;

6. Remove poop vein – if you see a poop vein (black “string” down the back of the lobster tail meat), then carefully pull it out. If you stretch the meat out straight, you should be able to pull it out in one go. If it breaks, just cut an incision halfway down the lobster tail then use a toothpick to help remove it.

Otherwise, pick it out when you slice it. (Sometimes poop vein is thick, sometimes barely there!)

7. Lobster meat removed! And voila! Lobster tail meat remove from the shell in one neat piece!

8. Serve whole or cut – you can either serve the lobster meat in one piece and let people cut it themselves into bite size pieces. Or you can cut it up into chunks – up to you, and depends how much lobster there is to go around.

Scroll up to see photos of individual plates where I sliced the lobster meat, and the platter where I kept most of the pieces whole.

Tip: Keep at least one lobster head. It makes for great presentation on a platter!

How to warm cooked lobster

Though I do not recommend cooking cooked lobster, you can warm it up slightly if you wish.

The best method is to steam using a stove steamer, just for a few minutes until the lobster meat is warmed through. Don’t risk a microwave steamer – too easy to cook the lobster!

So millions of dollars of lobsters which were destined for the export market have made their way to mainstream Australian grocery stores (Woolworths and Coles). They are being sold at heavily discounted prices of ~$20 each, making them far more accessible for everyday Aussies compared to the usual hefty price tags, upwards of $100 each!

These discounted lobsters are sold cooked and frozen, so the recipes contained in this post is specifically for cooked lobster.

And there you have it. Some quick last-minute recipes for fellow Aussies who have been lucky enough to score some of the discount lobsters this Christmas. An impromptu post I decided to share after learning at 11 am today that I’ll be in lockdown over Christmas Day – so I decided to use the lobsters I got for Christmas Day Lunch to do this post instead!

I know I say these are “quick and easy”, but I did manage to make a frightful mess photographing these recipes…. The clean up was long and painful!!!

The video will be up either later tonight or tomorrow morning! I wanted to get the recipes out asap so readers can pick up groceries if needed! But the nice thing about having a selection of recipes is that hopefully you have the ingredients for at least one of them

VIDEO COMING! WORKING ON IT… 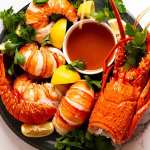 Here are 6 easy recipes for cooked lobster or crayfish that make the most of this luxury seafood! When you buy pre-cooked lobster, it’s best to keep it simple to preserve the flavour in the flesh (flavour is better with freshly cooked raw lobster – but much more expensive to buy!).

TOP TIP: Keep it simple and don’t re-cook lobster that’s already cooked (risk of drying out, loss of flavour). Treat it like buckets of cooked whole prawns you peel yourself!

Rundown of each recipe in recipe notes below.

DESCRIPTION OF EACH RECIPE

1. Lobster – this list has been created as a compilation of recipes that work well using pre-cooked lobster. The uses are more limited than using raw lobster, and the main tip I have is to use the lobster as is, without cooking it again (risk of drying out, loss of flavour).

If you have raw lobster, the variety of options is much broader so don’t limit yourself to just this list!

Frozen lobster – place on a tray or large bowl and thaw overnight in the fridge. Drain well before using.

Removing lobster shell – do not do this until you are ready to serve the lobster as it protects the flesh and keeps it juicy.

2. Salsa Verde – leftovers can be frozen. Thaw in fridge overnight. Use as sauce for fish or other seafood. Strong flavour means you needn’t do anything else to flavour the fish!

The last minute cancellation of Christmas parties and extended stay by family during this Christmas period means that both Dozer and I have been doing a lot of THIS over the past week!!