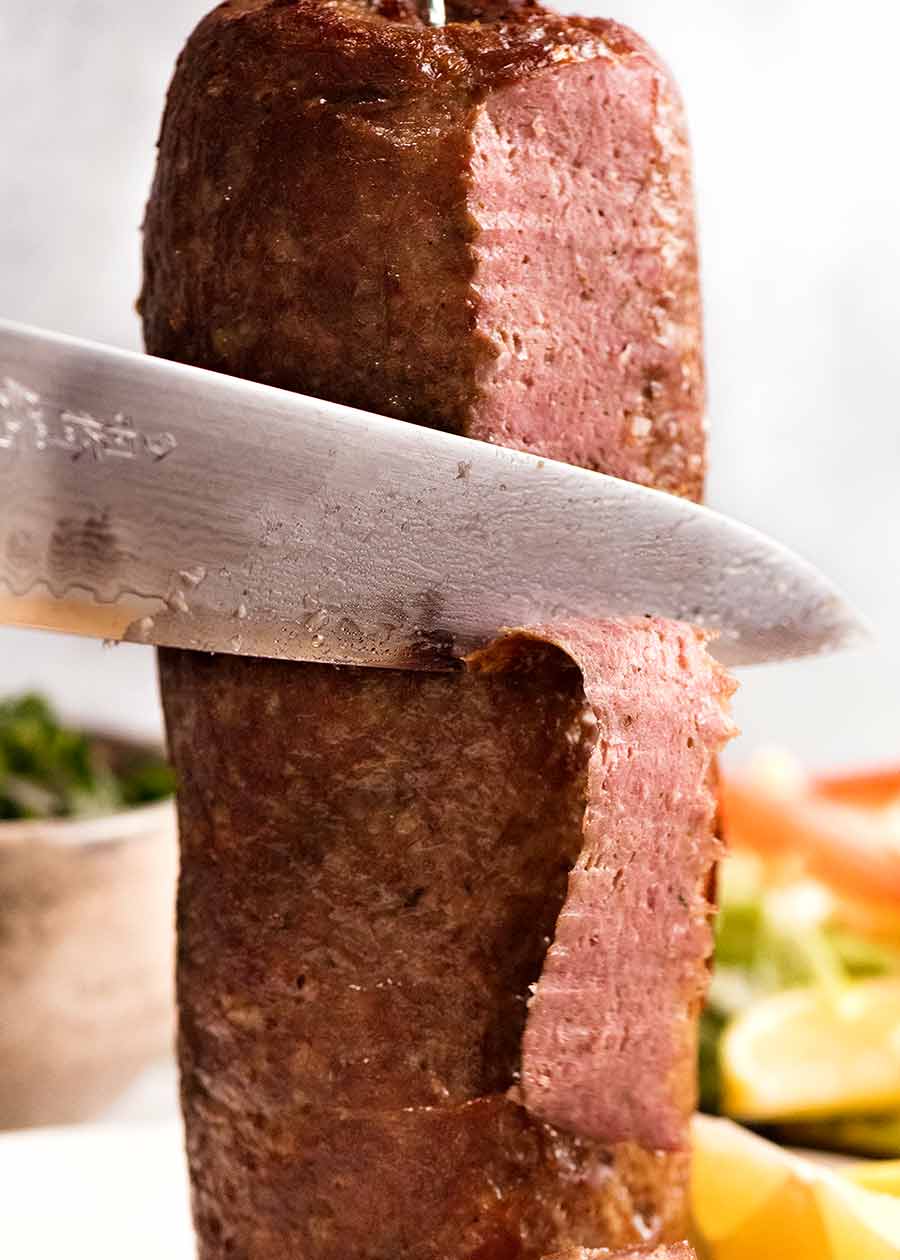 This is a homemade recipe for the mystery Doner kebab meat you see rotating on vertical rotisseries in kebab shops. It’s a miniature version but what it lacks in size is made up in flavour – and authenticity!! Use to stuff into beef or lamb Doner Kebabs OR Gyros.

How many times have you walked past a Doner kebab shop and glanced at those giant punching bag-sized kebab meats rotating round and round, and wondered how long has that meat been out for?? I wonder if it’s really meat, or 90% fillers??

Well wonder no more!! Shops might use fillers, but WE don’t need to!

This homemade version of rotisserie Doner Kebab Meat can be made with either lamb or beef. While beef is a firm favourite here in Australia, in Turkey (the home of Doner Kebabs) they are made with both lamb and beef. Both are delicious, I couldn’t choose a favourite!

Though this is a miniature version of the giant ones you see in the shops and we’ve adapted the cooking method for home kitchens, the end result is so similar to the real deal it is going to amaze you!

Stand it upright, carve it up thinly and fry it up gently to get golden edges. Your house is going to smell like a kebab shop! 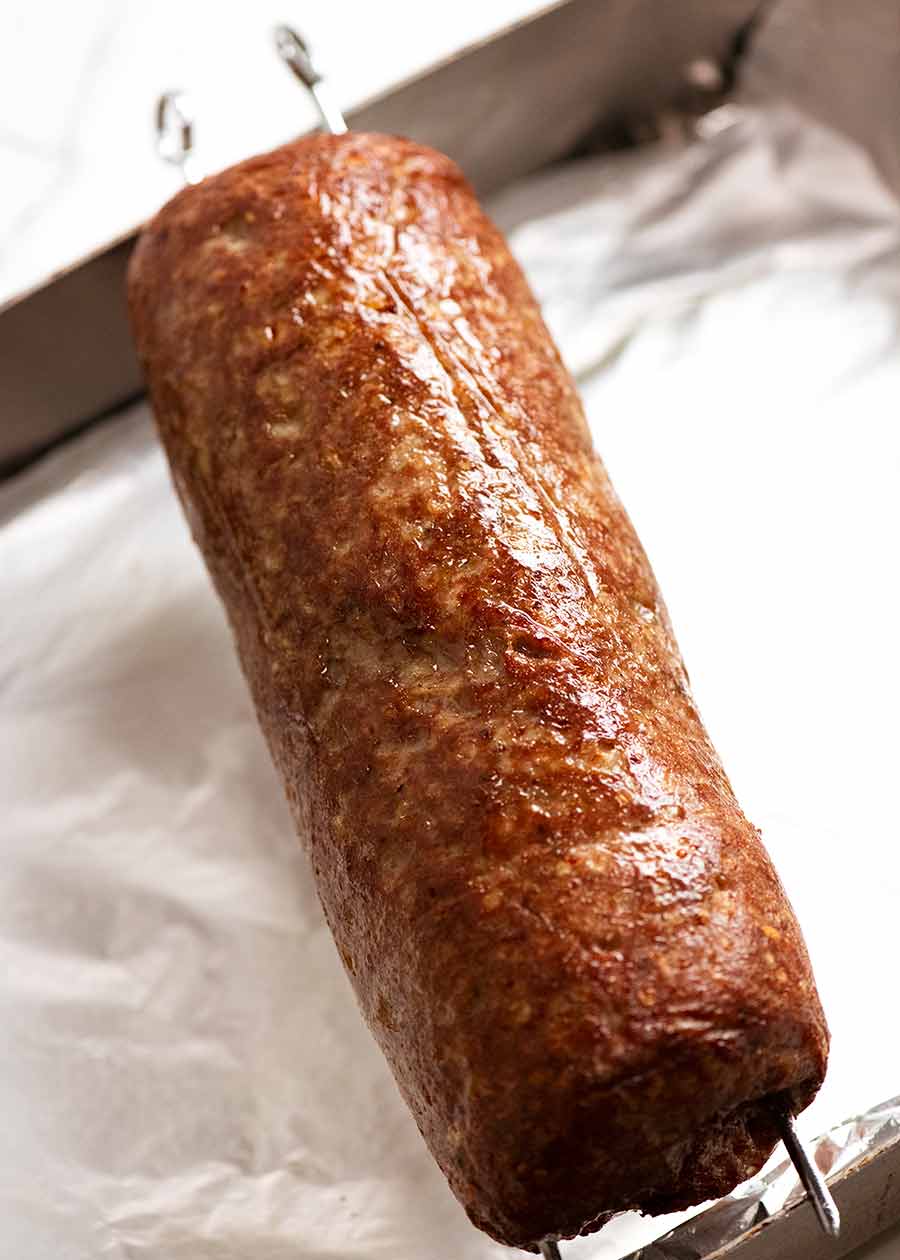 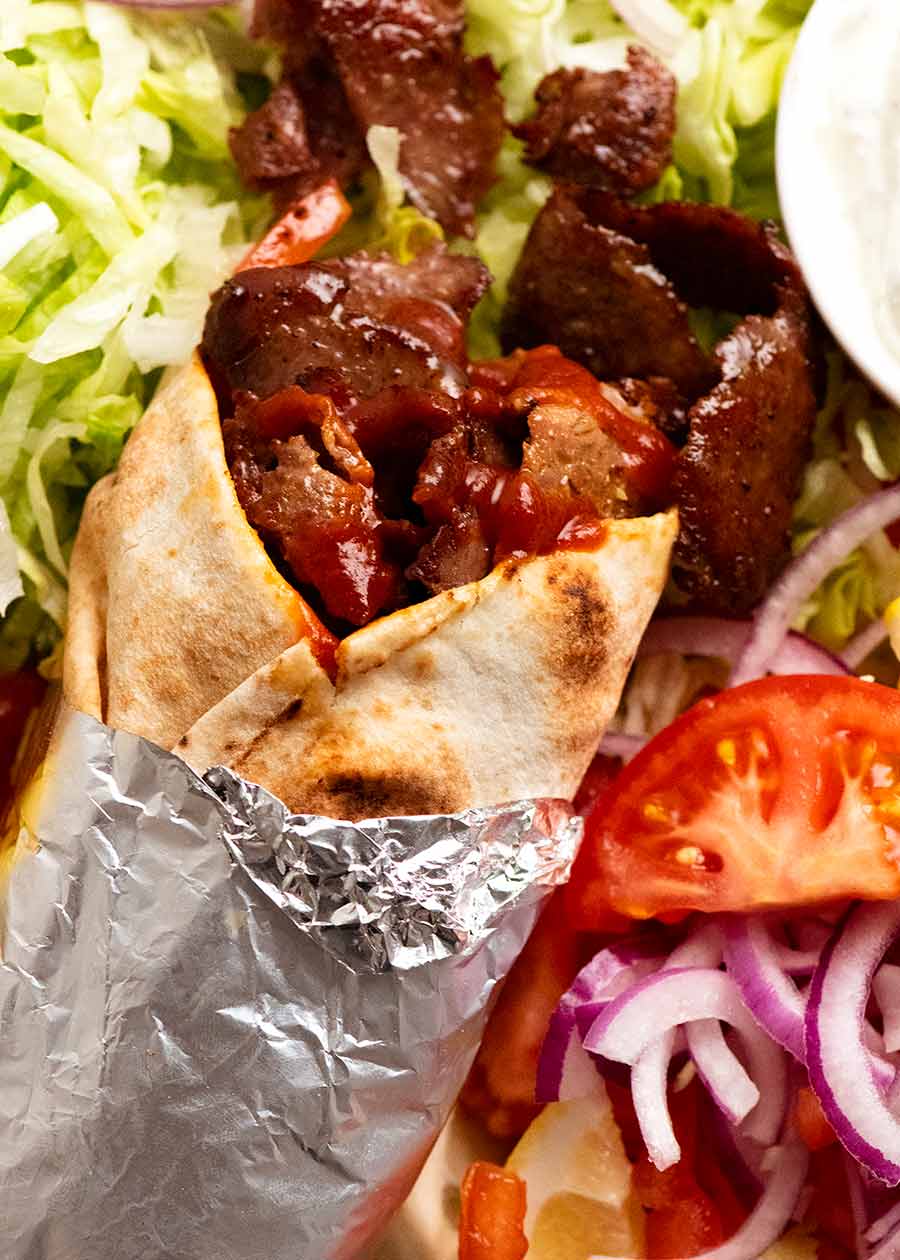 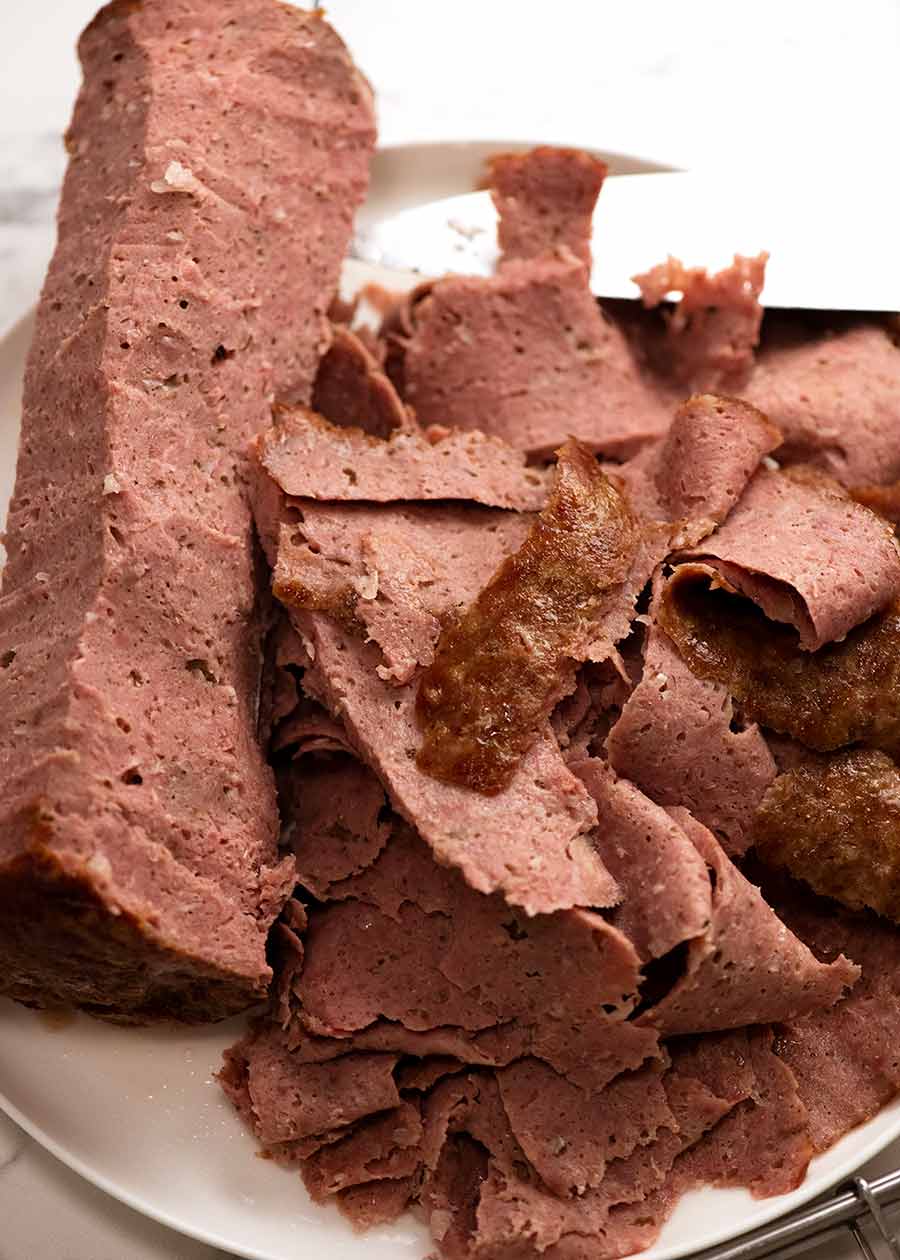 What is Doner Kebab meat made of?

Here’s what you need. Bacon is the surprise secret ingredient for this homemade version – more on this below! 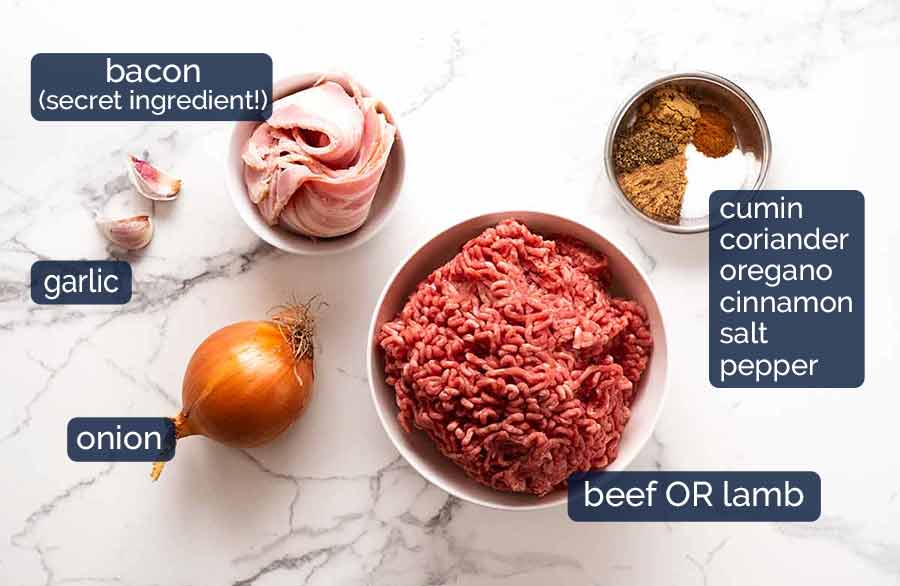 * Note on BACON and authenticity – as Doner kebabs are mainly from Muslim countries, bacon might seem out of place given pork is not consumed for religious reasons. The reason it is included is to make this recipe accessible for home cooks. Traditional Doner Kebab Meat is made with loads of animal fat. When you watch You Tube videos of the layered version of kebab meat, they thread a layer of meat (like chicken) then they literally COVER that layer with chopped fat then thread chicken on, and again fat. SO MUCH FAT!

How to make Doner Kebab meat

And the best part – how to make it! It is easy. Once you get your head around manhandling a giant block of meat! 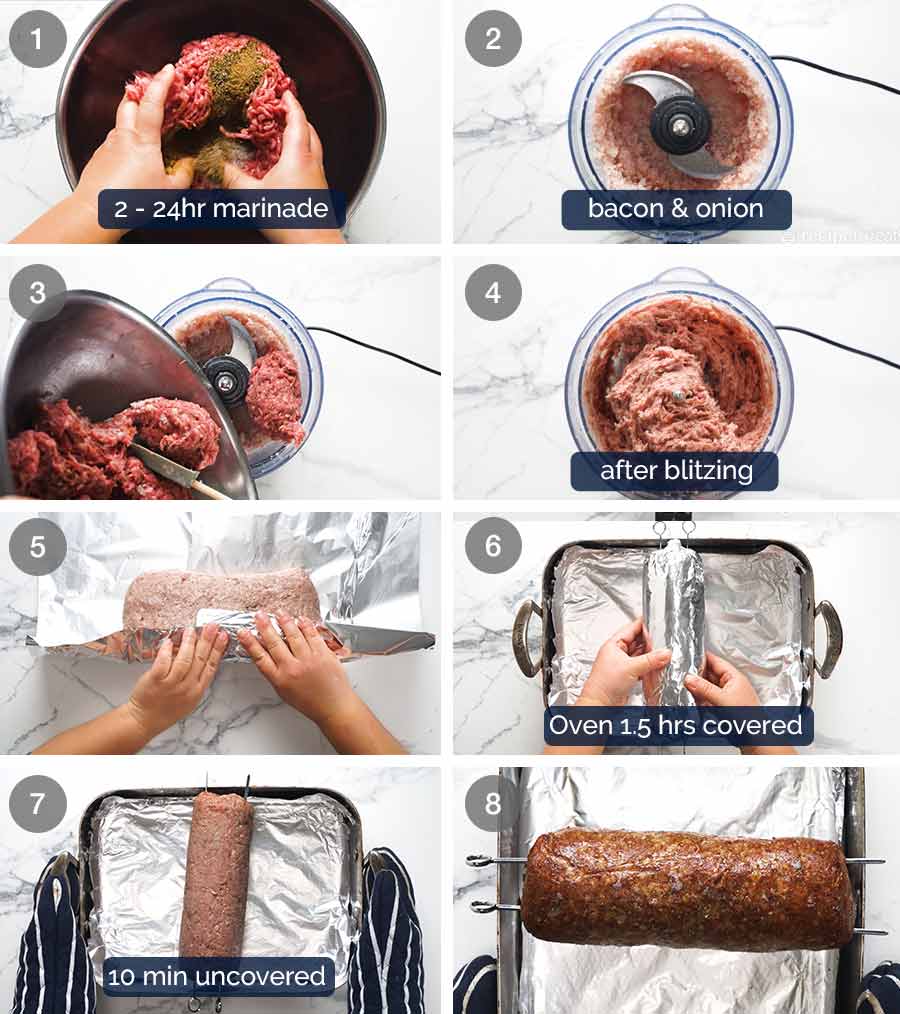 In a nutshell, the meat is pureed in a food processor which transforms it into a “paste” which gives it the unique carvable meat texture (as opposed to, for example, Meatloaf where ground/mince beef is just shaped by hand and has a more “crumbly” texture).

Then roll it into a log shape using foil – this holds the shape while suspended over a pan using skewers (without it, the meat sags when raw) – then cook it in the oven. Whip off the foil at the end to brown it, stand it upright and carve!! 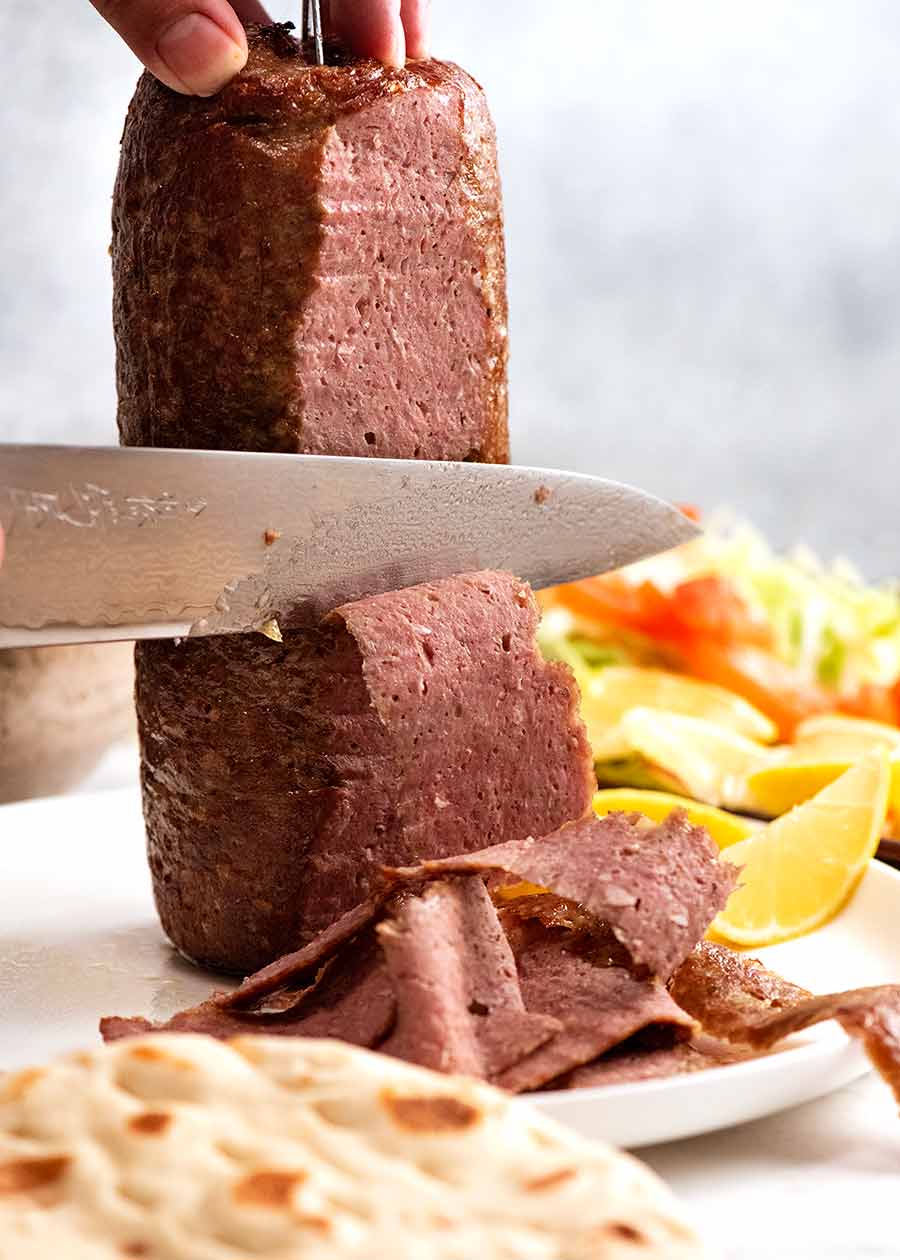 The texture of the cooked meat is such that it can be carved thinly – just like in kebab shops!

Shave it quite thinly and once you’ve cut off as much as you want/need, pan fry it gently to get a blush of gold on it. This is a magic touch that really transforms the meat because once you carve off the outer browned layer, the meat inside is just pink. It’s the same special finishing touch we do with Mexican Carnitas! 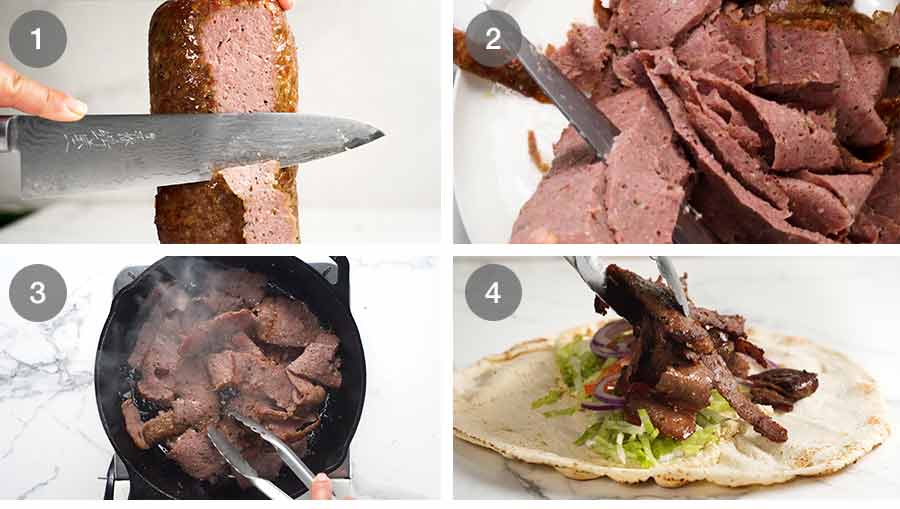 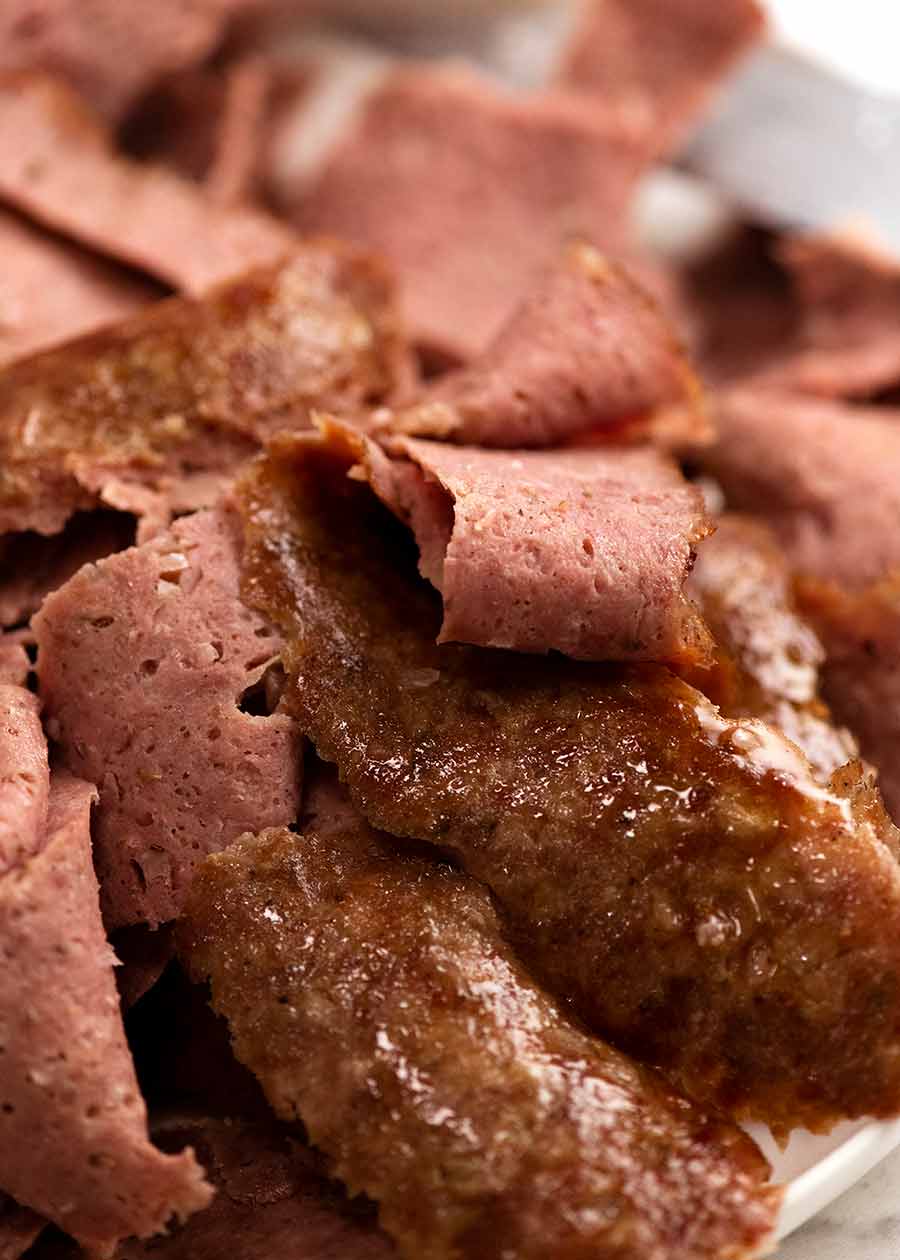 And here’s a close up of the Doner Kebab Meat being pan fried. Just lightly pan fried, not to crisp it, just to get a hint of gold on it like they do in Kebab Shops to freshen up the meat.

It only takes a minute or so because it’s so thin. 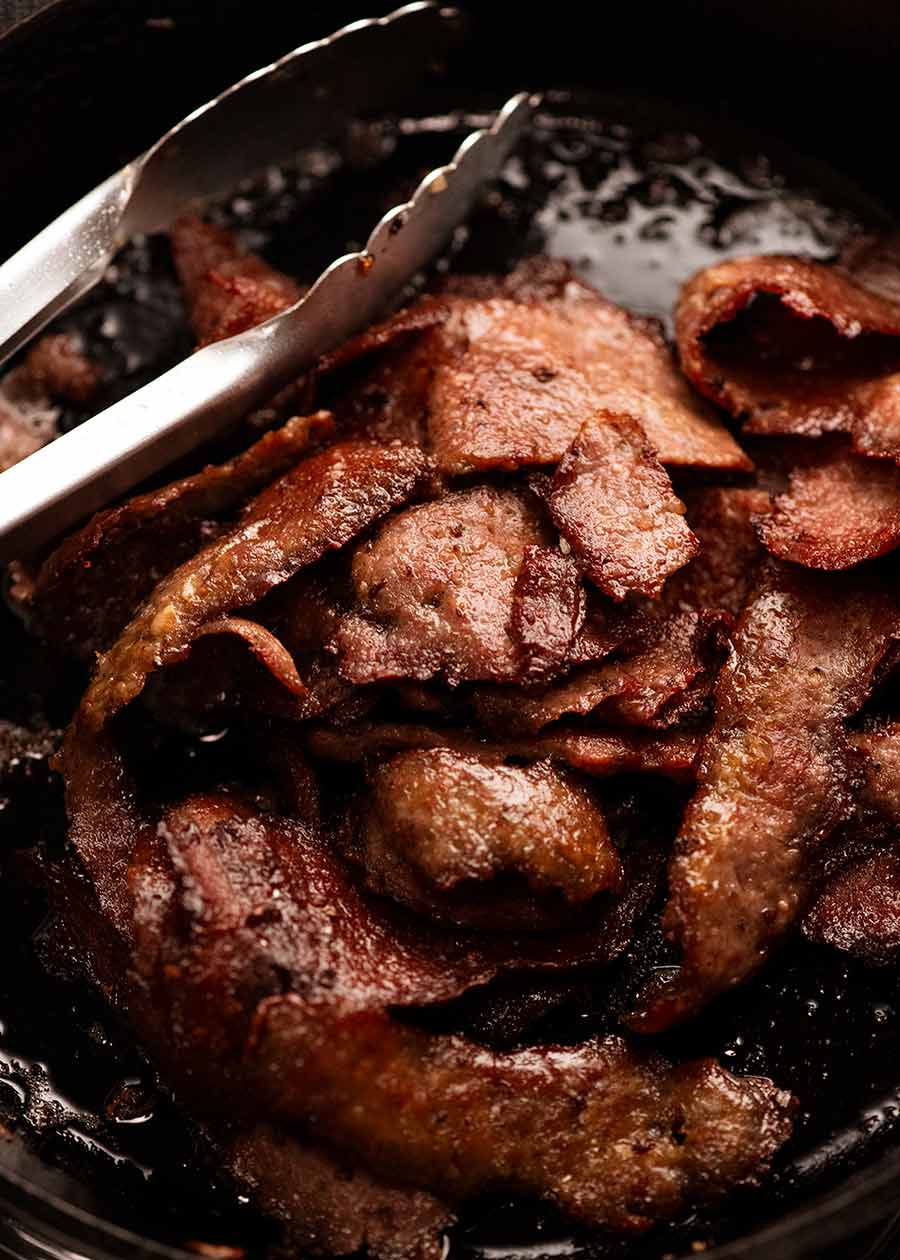 And here is a big fat juicy Doner Kebab! Wildly popular here in Australia, particularly after a late night out at the pub with mates!

Made with Lebanese bread or other thin flatbreads, smeared with hummus, topped with Doner Kebab Meat, lettuce, tomato, onion and sauces such as yogurt, garlic and chilli sauce. Optional extras include cheese (which I think is a blasphemy!) and tabbouleh. 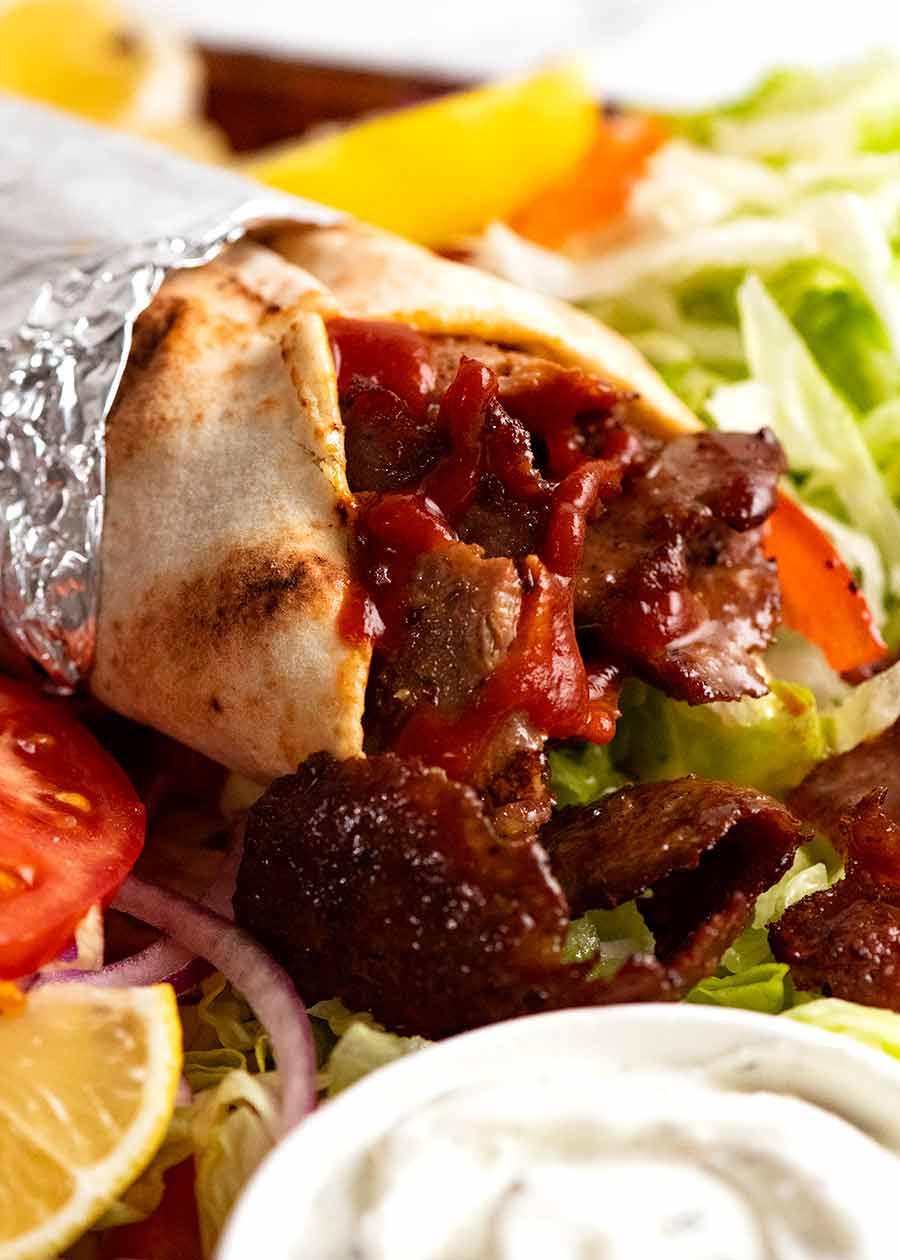 Imagine it over CHARCOAL!!

I’ve had to make do with a boring old oven to cook this. I would LOVE to to make this over charcoal one day! Imagine it on a spit, rotating slowly over hot coals….that smokey flavour would be to die for!

One day, one day… 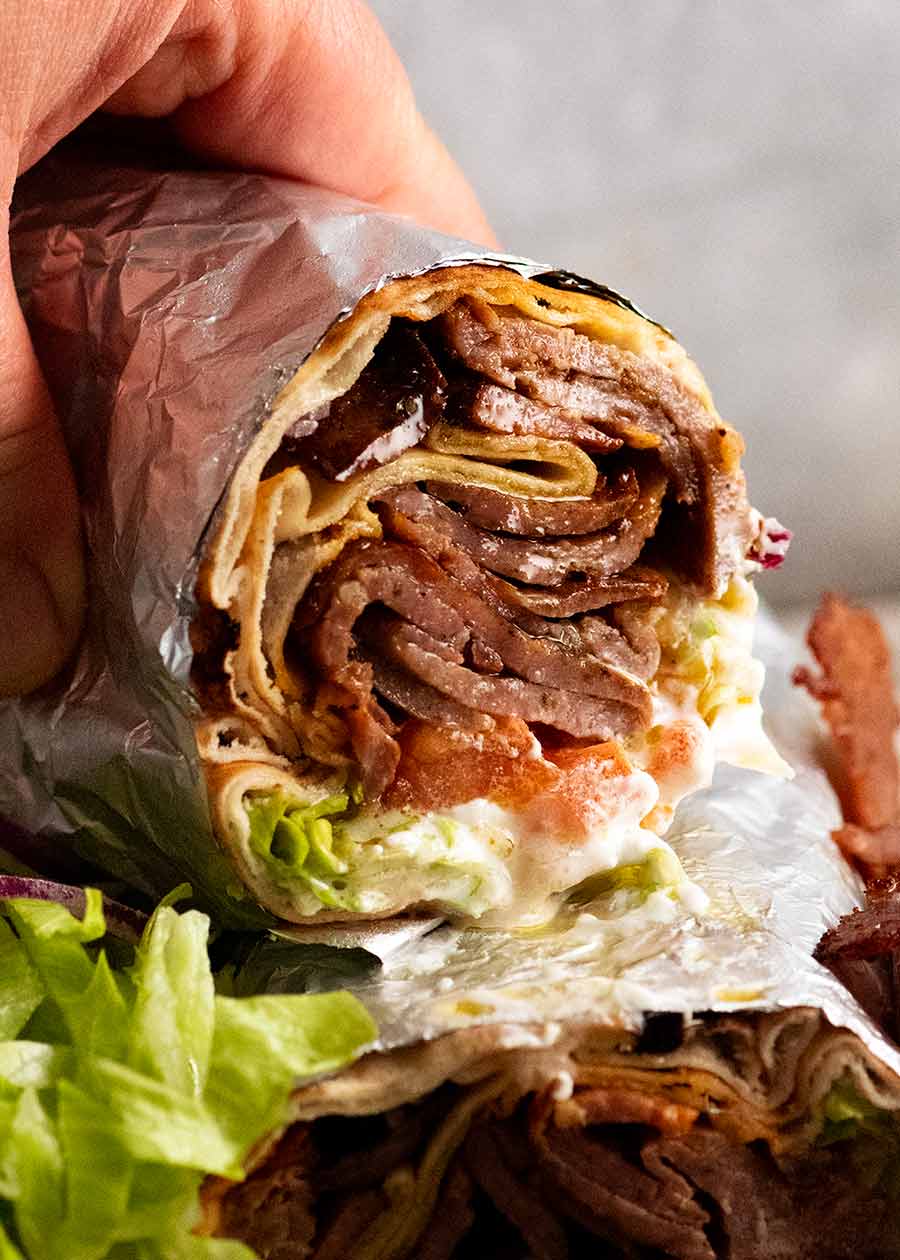 Doner Kebab vs Gyros vs Shawarma

Gyro, shawarma and doner kebab all have the same meaning. Those words all translate to “turning” or “rotating meat” and they refer to the rotisserie cooking technique.

Which word is used depends which part of the Mediterranean or Middle East you’re in. Gyros is Greek. Shawarma is Israel and Arab countries (spicing is much stronger). Doner Kebab is what they call it in Turkey.

While there are of course some differences in the finished dish (type of flatbread, sauces used) and the seasonings used for the meat, they are similar in spirit!

As for what animal meat it is, it varies. Chicken, beef, lamb and pork are all used to varying degrees, depending on the country. Also whether it’s layered (like in Chicken Doner Kebab) or smooth meat style (which is what I’m sharing today) also varies depending where you are.

One thing’s for sure. I’m yet to meet a Doner Kebab/Gyros or Shawarma that I haven’t loved! 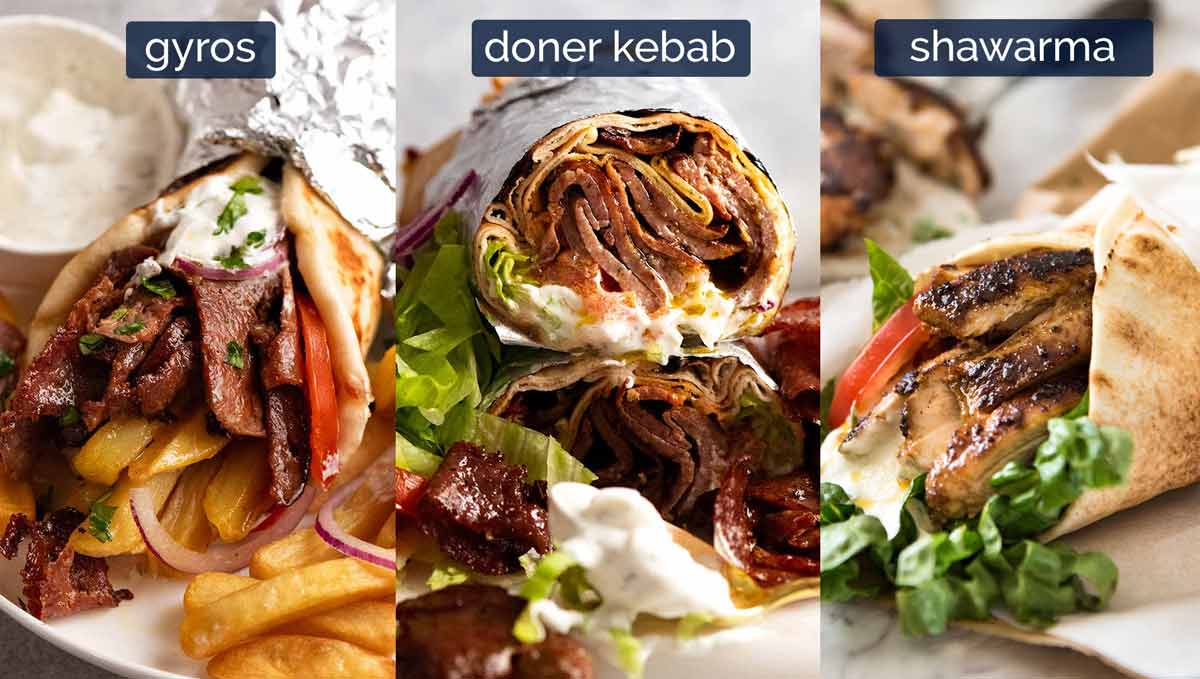 Here in Australia, Doner Kebabs is common though you will find Gyros in ethnic areas. In America, it’s the other way round – Gyros is the common version. Harder to find Doner Kebabs!

Nowadays, you’ll find both all around the world. Last year, I had some amazing Doner Kebabs in the heart of Paris of all places! 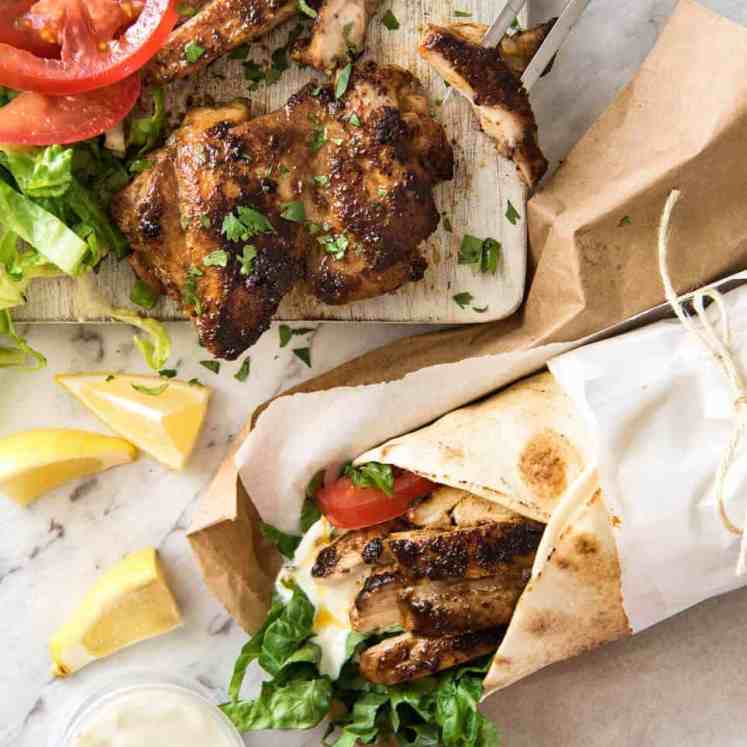 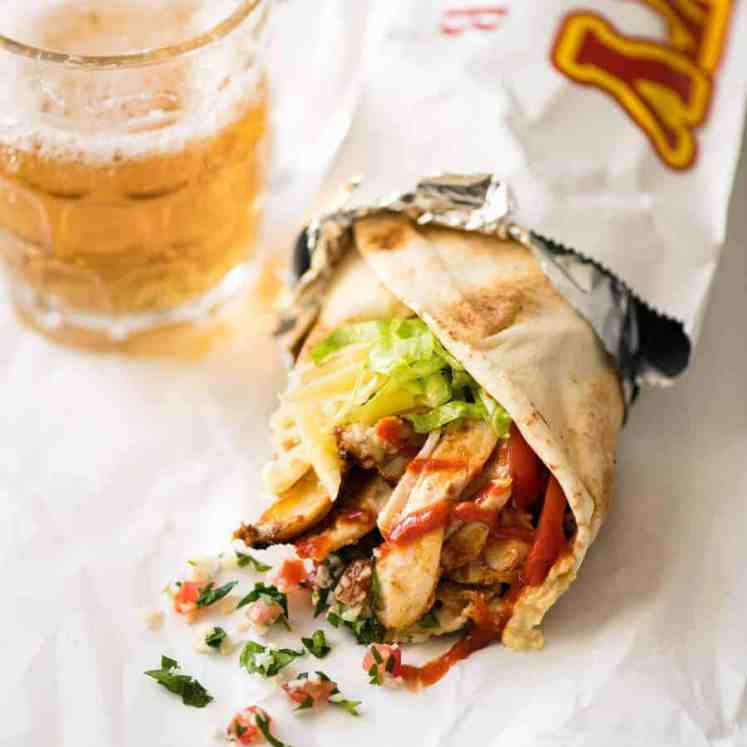 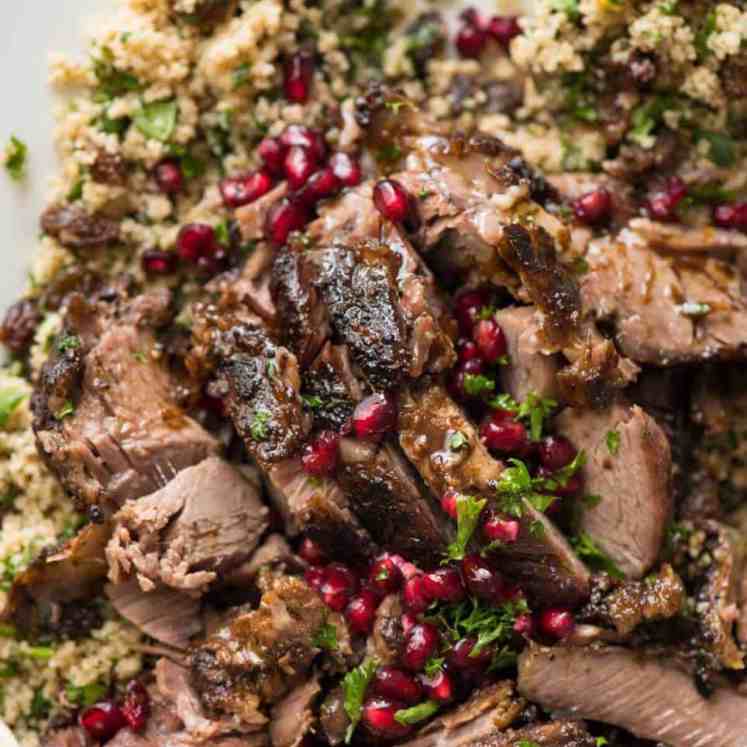 Two more big things this homemade Doner Kebab Meat has going for it:

And if that’s not enough to convince you to make this, then just do it to get a kick out of how it is a dead set replica of the kebab shop meat. Or your favourite gyros cart. Depending on where you live! – Nagi x

PS I honestly cannot stress enough how your house is going to smell just like your local neighbourhood kebab shop!! 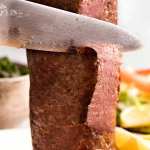 Recipe video above. This is a homemade version of the giant punching bag size Doner kebab meats rotating on vertical rotisseries in kebab shops! It might be small, but what it lacks in size it makes up for in authenticity and flavour. Prepare to be amazed – it tastes JUST like the real deal (and your house will smell like a kebab shop!)

1. Meat – fattier is better for flavour and to keep the meat juicy. Shop kebab meat is VERY fatty – fattier than this recipe!

Supermarket meat typically discloses fat % nowadays (look at the nutrition table), and butchers should know the fat % of their meat.

Beef is most common in Australia, both are popular in Turkey

See note in post on authenticity and reason for inclusion (re: Doner kebabs mainly from Muslim countries and pork is not consumed for religious reasons).

Can’t have bacon?? Use one of these options:

3. Salt – I know it sounds like a lot, but remember the meat is shaved thinly so you don’t get much salt in each bite.

If you only have table salt, decrease to 2 teaspoons.

4. Pureed meat consistency – See video for how it should look – you should be able to do a smooth “smear” on the surface.

5. Skewers optional – skewers enable the meat to be cooked in a cylinder shape by keeping it elevated off the pan. But if you don’t have them, that’s fine – just shape into a log and cook on the pan or on a tray (in foil).

6. Foil – purpose is twofold: to hold the shape of the log as it cooks (otherwise raw log slides down through skewers) and hold in juices as it cooks.

7. Propping issues – if your log is too long to fit in the pan / skewers not long enough to reach edges, use things like ramekins or scrunched up balls of foil in the pan to keep the log elevated. OR prop it on the diagonal.

9. Uncooked meat – if you don’t have an meat thermometer and you carve away and find the inside is a bit undercooked, don’t worry, the thin slices cook in a flash on the stove!

11. Recipe credit goes entirely to Kenji Lopez-Alt at Serious Eats for discovering this amazing technique! We used his method, added our seasonings and tweaked it to make it an authentic looking log (added foil, skewers etc etc).

Same expression whether he’s gagging over a giant hunk of Doner Kebab meat or panting from exertion at the park…. 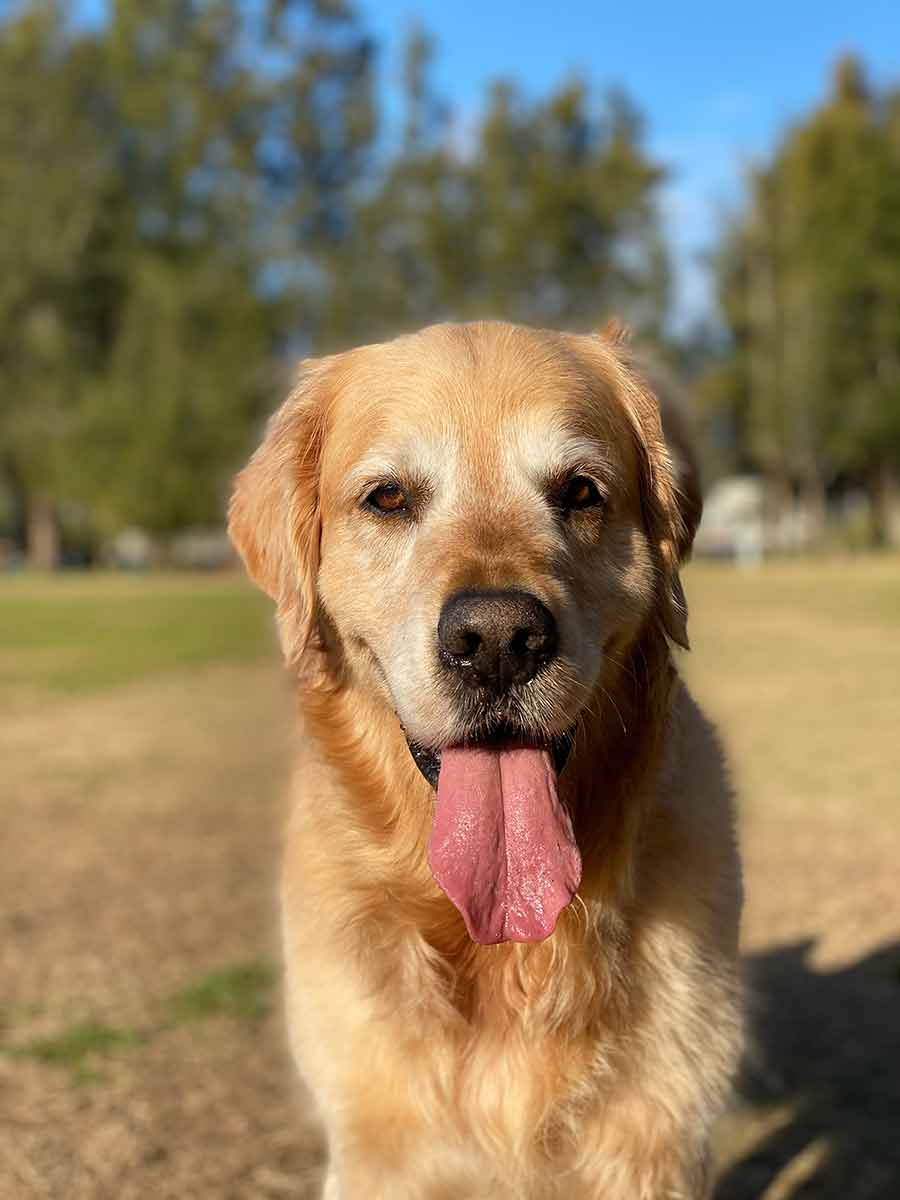