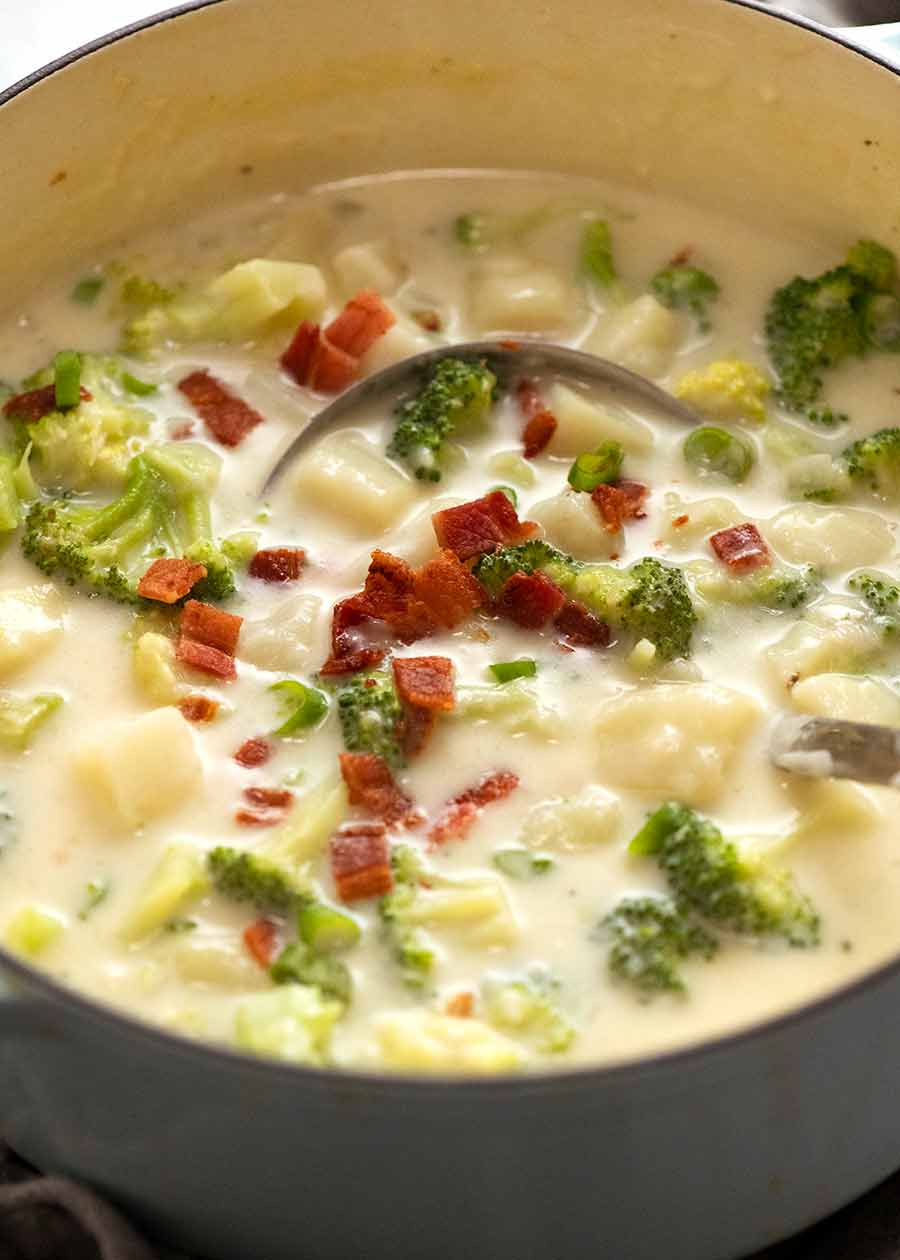 This is a chunky Broccoli and Potato in a thick and creamy soup broth that’s made with no cream. It’s hearty, filling and surprisingly low-cal(ish), clocking in at 400 calories for a generous bowl (and I don’t skimp on serving portions!).

For a hit of protein, add some prawns/shrimp or shredded chicken. And we can pretend that finishing with a sprinkle of bacon is optional….

This is a thick and creamy soup with potato and broccoli that you’d swear has a bucket of cream in it, but it doesn’t have a single drop. It’s hearty, comforting, tastes rich and indulgent but is in fact relatively healthy with just 405 calories for a VERY big bowl!

It’s one of those recipes that I classify as “accidentally healthy” – I haven’t done anything to reduce calories and thereby compromise on tastiness. It just happens to have a sensible calorie count for a generous size serving that is satisfying to have as a meal in itself. 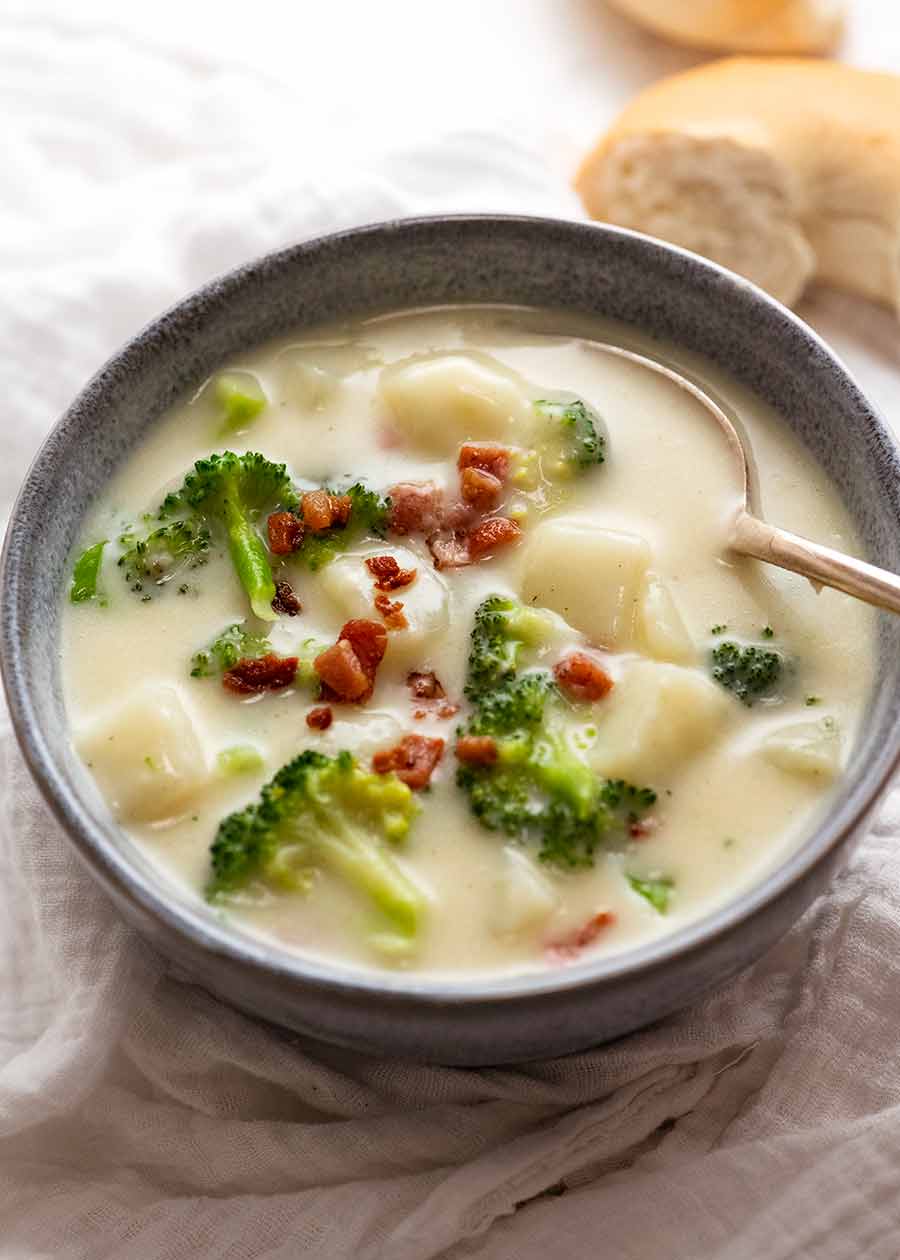 How this soup is thick and creamy WITHOUT cream

) but it’s just melted butter + flour mixed together which thickens whatever liquids you pour into the soup. A core cooking technique that will serve you well in life once you know how to make it!

It’s the base of almost all creamy things you will find on my website – like this Ham Potato and Corn Chowder, Seafood Gratin Pasta Bake, Creamy Broccoli Gratin and the Cheese sauce topping of things like Lasagna and Greek Moussaka. And it’s the very foundation of the creamy cheesy sauce of a great Mac and Cheese!

Much healthier than using loads and loads of cream!

What you need for this Potato and Broccoli Soup

Here’s what you need for this creamy soup: 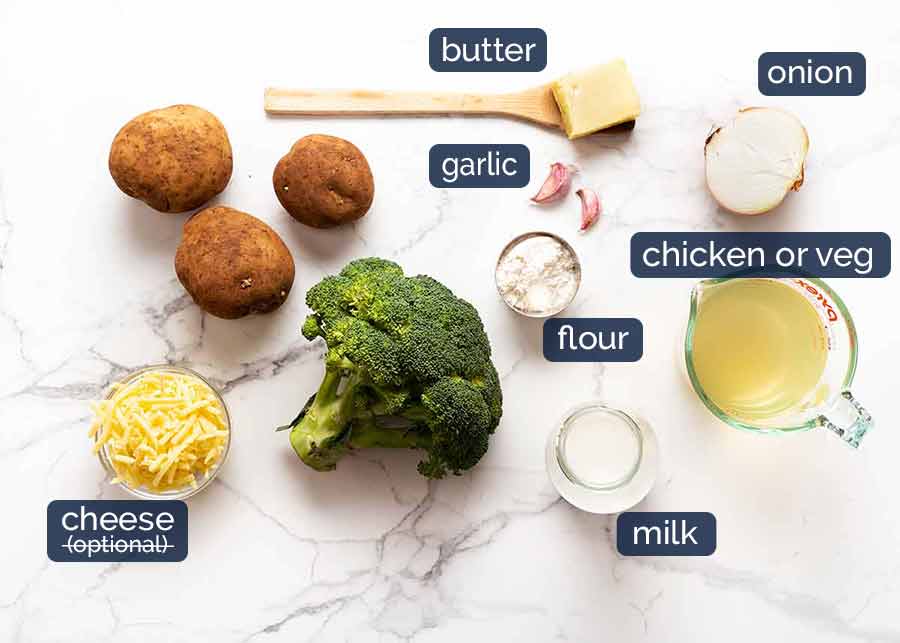 The cheese in the above is for stirring through the broth. It doesn’t make it ultra cheesy (we’re not making Mac and Cheese here), it just adds a little touch of flavour and seasoning into the soup, as well as thickening it slightly.

I originally intended to make it optional, but I changed my mind. It’s not a deal killer. But it’s very (very) highly recommended to include it.

Bacon – on the other hand, I’ve left out the sprinkle of bacon because I do consider that as an optional extra. You can also switch it for something else that provides a similar special finishing touch to soups – like croutons (see here), crispy fried shallots (ie the Asian essential), some grated cheese or parmesan. So there’s a few options here.

And here are process photos for how to make it. Basically, it starts by making the above described roux, then we cook small cubes of potato first and add the broccoli later (because it cooks faster). The idea here is that by the potato and broccoli are both cooked perfectly, the soup has thickened so it’s beautifully creamy! 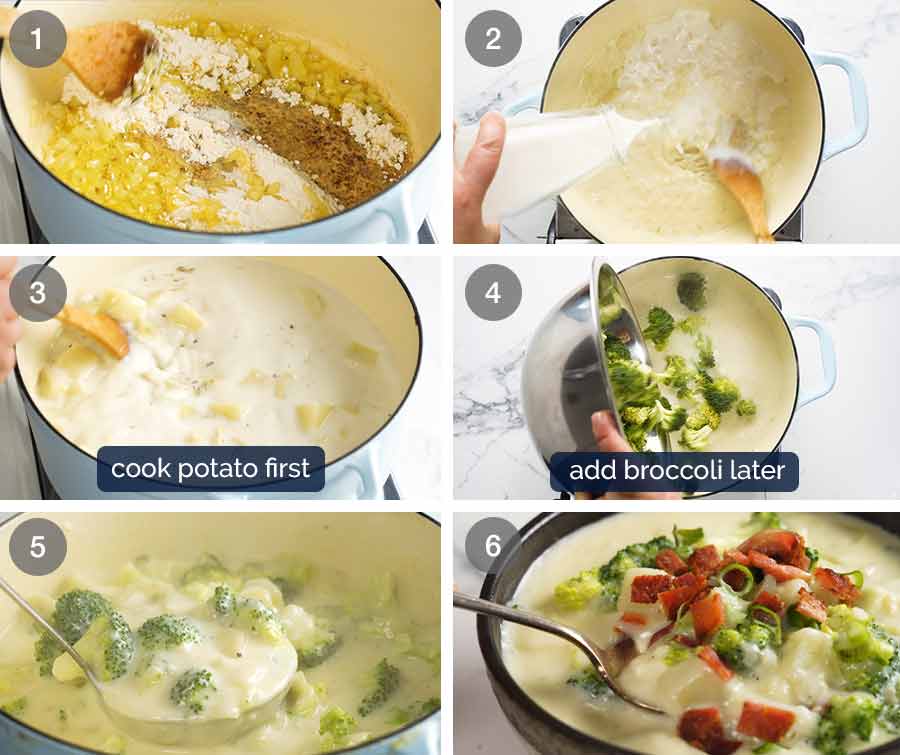 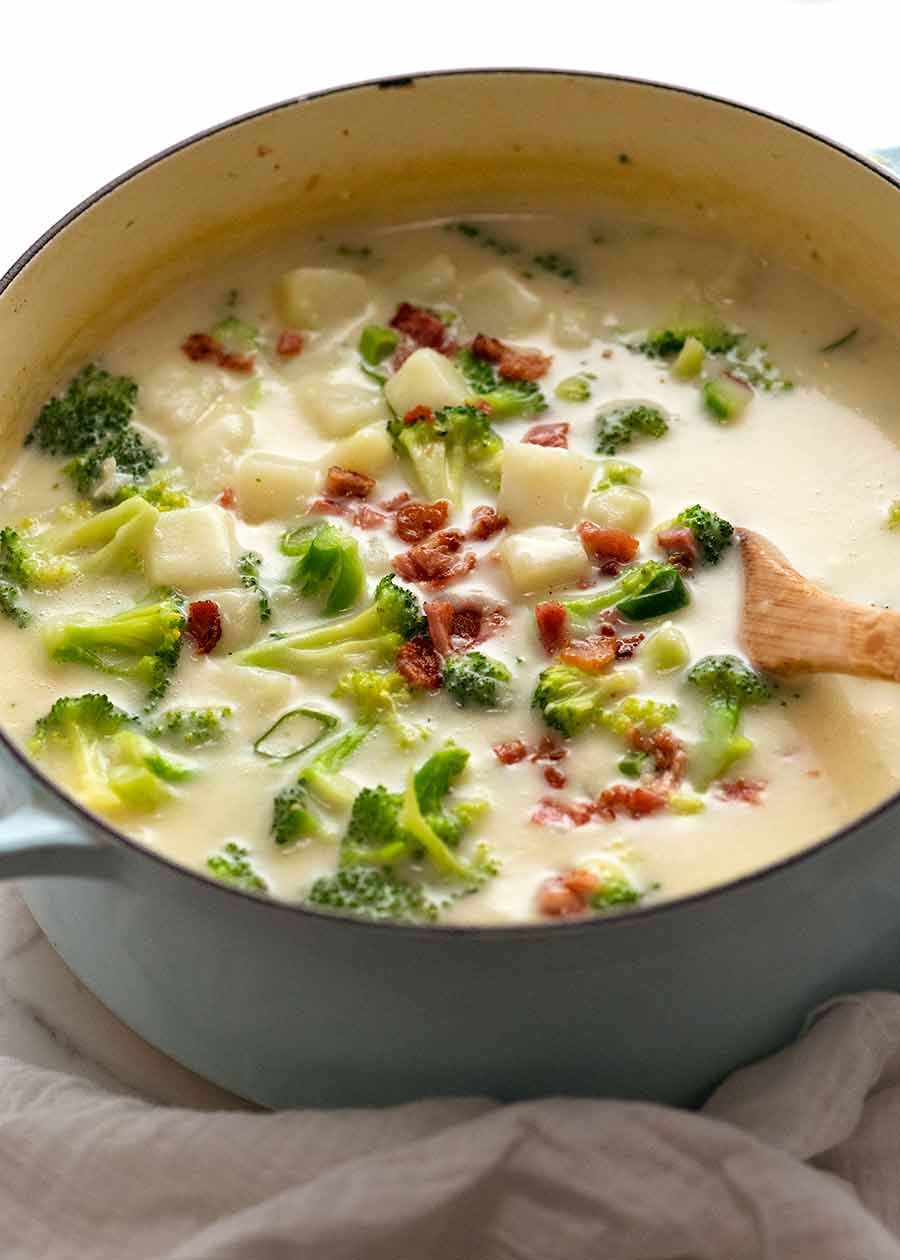 I’ve used broccoli here, but it’s a direct switch out for cauliflower or broccolini as an alternative. Works great and looks elegant – a pure white soup.

But actually, you can use any vegetables you want here. Just put it in so it cooks through within the prescribed recipe time!

And lastly – soup dunkers. I know this already has a starch in it, but who ever says no to something hot and crusty for dunking? Even better if there’s something molten and cheesy on it, and if it has garlic in it as well? Swoon.

That said and done, I do swear that this soup is delicious in its own right, just as it is. Enjoy! – Nagi xx 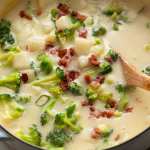 1. Potato – Any all rounder potato works well for this recipe. In fact, any potato works will work fine, whether it’s waxy or starchy.

2. Broccoli – break/cut the florets into small pieces that will easily fit on a soup spoon. 5 cups (packed) is about 300g/10oz.

3. To make this GLUTEN FREE, leave out the flour and make sure you use GF broth. Then mix together 2 tablespoons of cornstarch / cornflour and a splash of water to make a slurry. Add that into the soup towards the end and cook for a couple of minutes – this will thicken the soup.

4. Storage – Fridge for 4 to 5 days, or freeze, thaw then reheat gently (don’t want to cook potato again, might get so soft it starts falling apart).

5. Nutrition per serving, assuming 5 servings and that 1 cup of cheese is used. Excludes toppings – because I cannot be held responsible for the amount of BACON you might pile on top!

Normally I add an update to the Life of Dozer. But in this case, this photo and caption from the original publication date still applies!

From the original publication date:

Not a fan of broccoli… 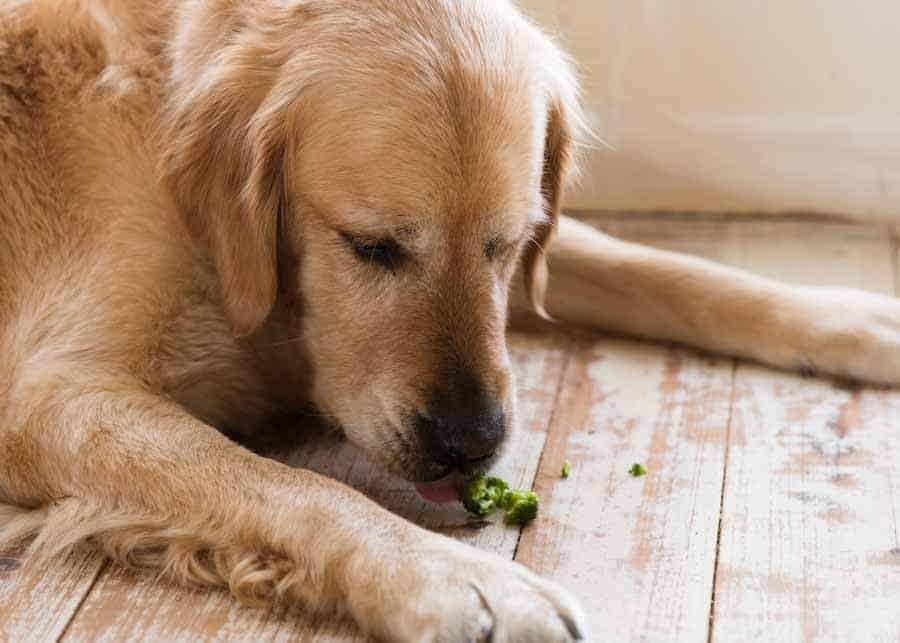