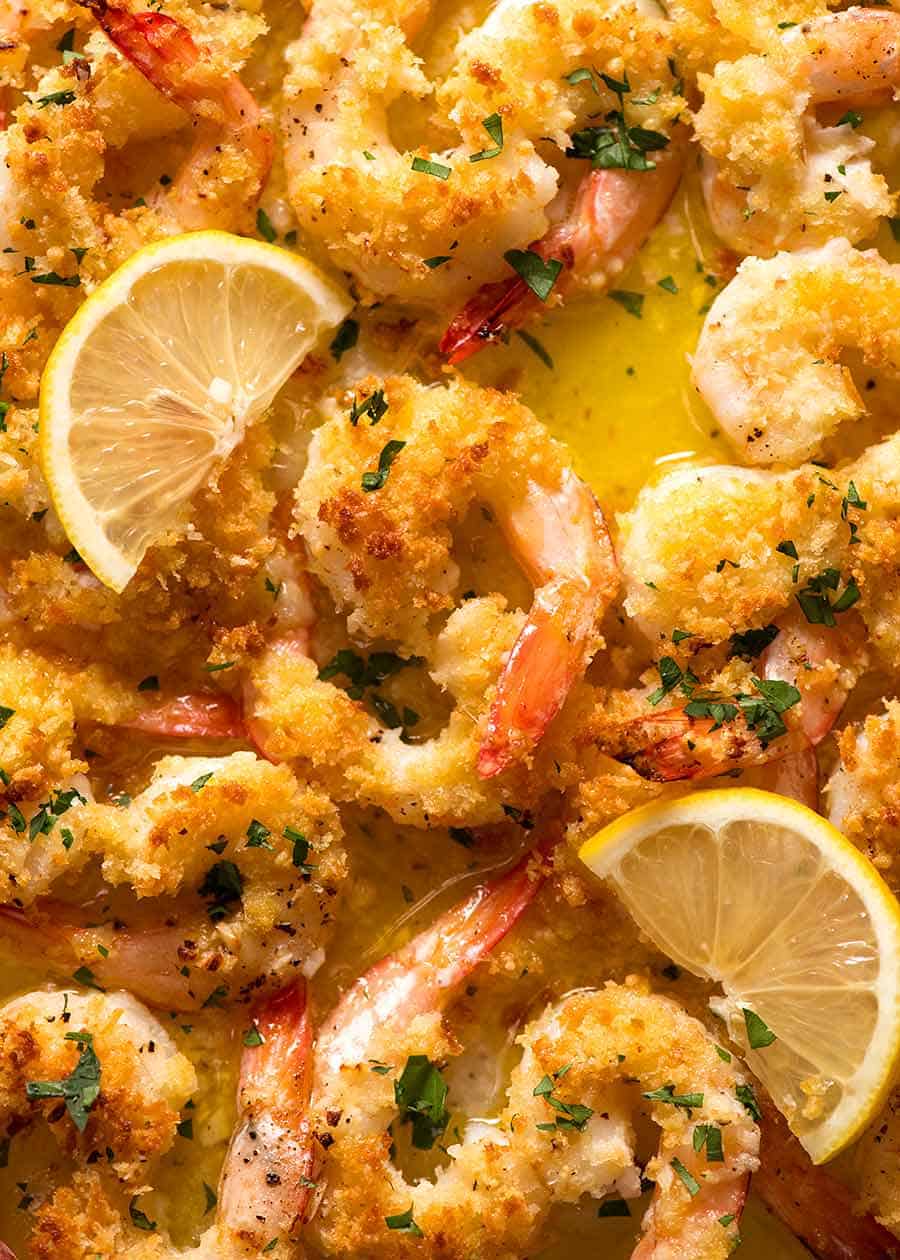 Here’s an incredible way to cook shrimp in the oven – baked in a lemon garlic butter white wine sauce, finished with a golden crunchy parmesan breadcrumb topping. People call it Magic Baked Shrimp – because it’s so simple to make, yet it tastes like a million bucks. It’s basically an oven baked Shrimp Scampi!

When you bake shrimp in the oven, you simply can’t achieve that same caramelisation that you get from searing prawns on the stove or grill, which means less flavour.

And frankly, shrimp is pricey compared to other day-to-day proteins. So when I cook it, I’m not going to compromise!

So here are the two things in this recipe that adds an extra edge to compensation for loss of flavour because we can’t caramelise shrimp in the oven:

This is an effortless, utterly incredible way to cook shrimp in the oven that’s worthy of company! 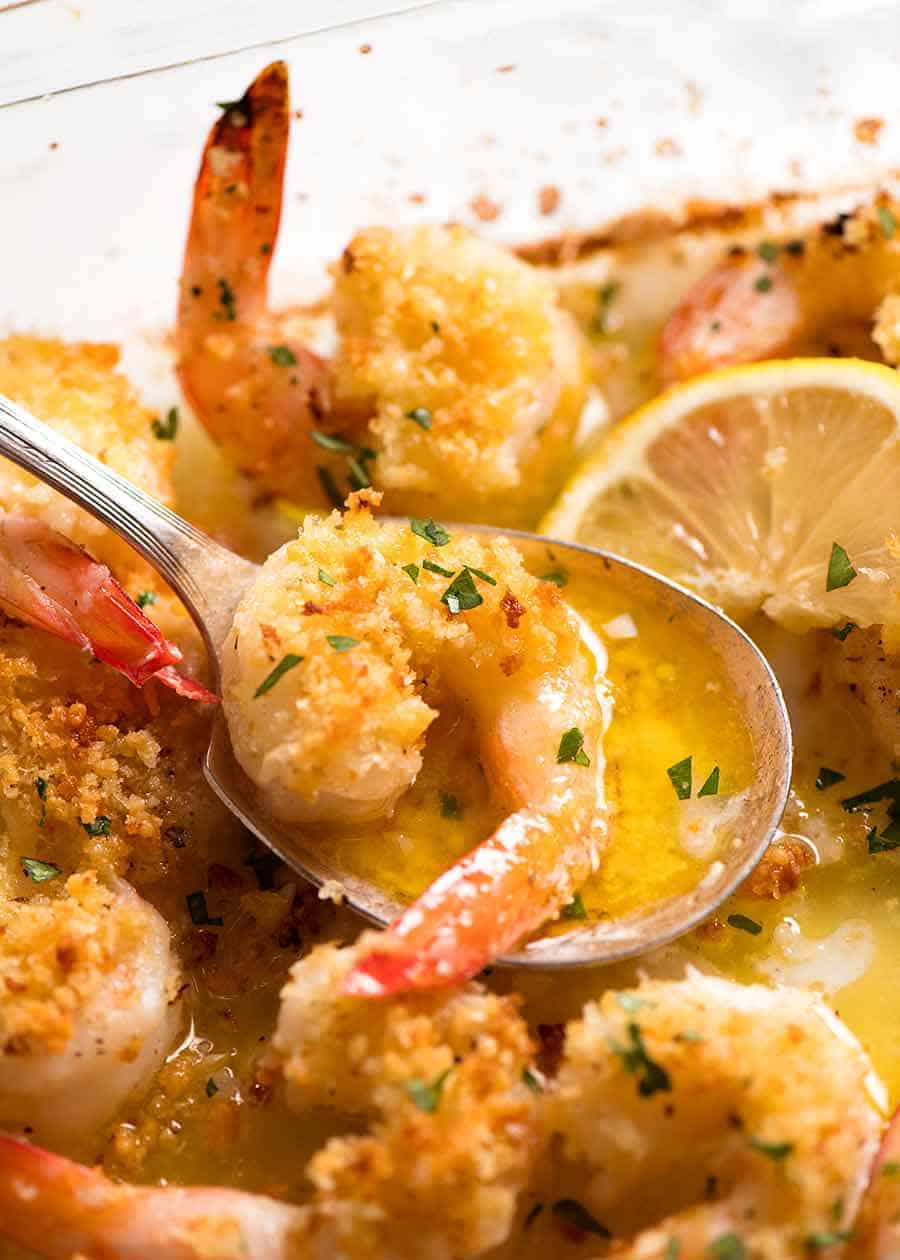 What you need to make GREAT baked shrimp

There’s not that many ingredients required – part of the Magic of this recipe!!

For convenience, I use store bought grated parmesan and frozen prawns/shrimp.

Note: The prawns/shrimp shown below ARE raw! They are from Costco and they’re a particular type that are pink when raw. 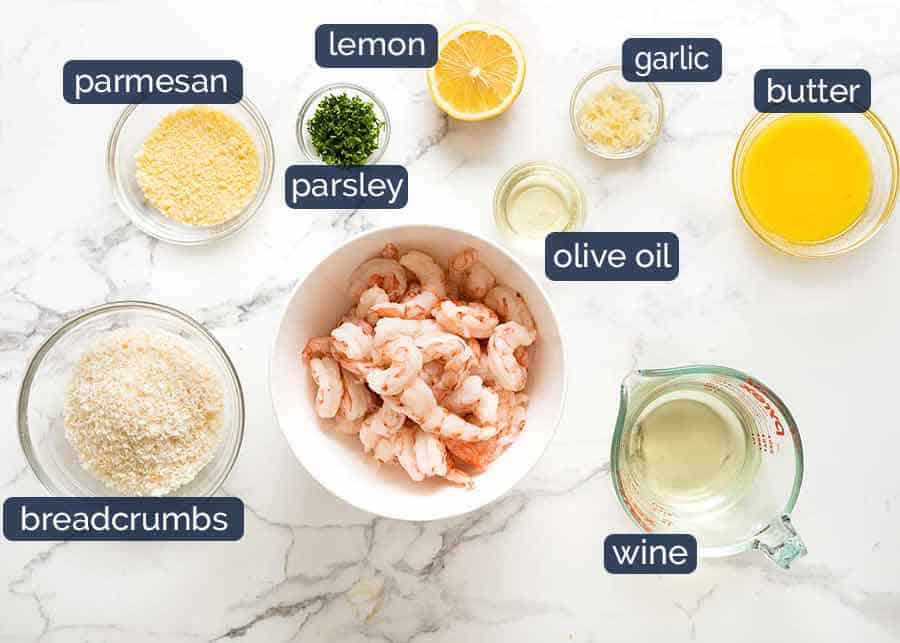 How to cook prawns / shrimp in the oven (and make them really tasty!)

So here is how I cook prawns / shrimp in the oven:

Yep, it’s that easy. No stirring, no stove splatters, all done in one pan! 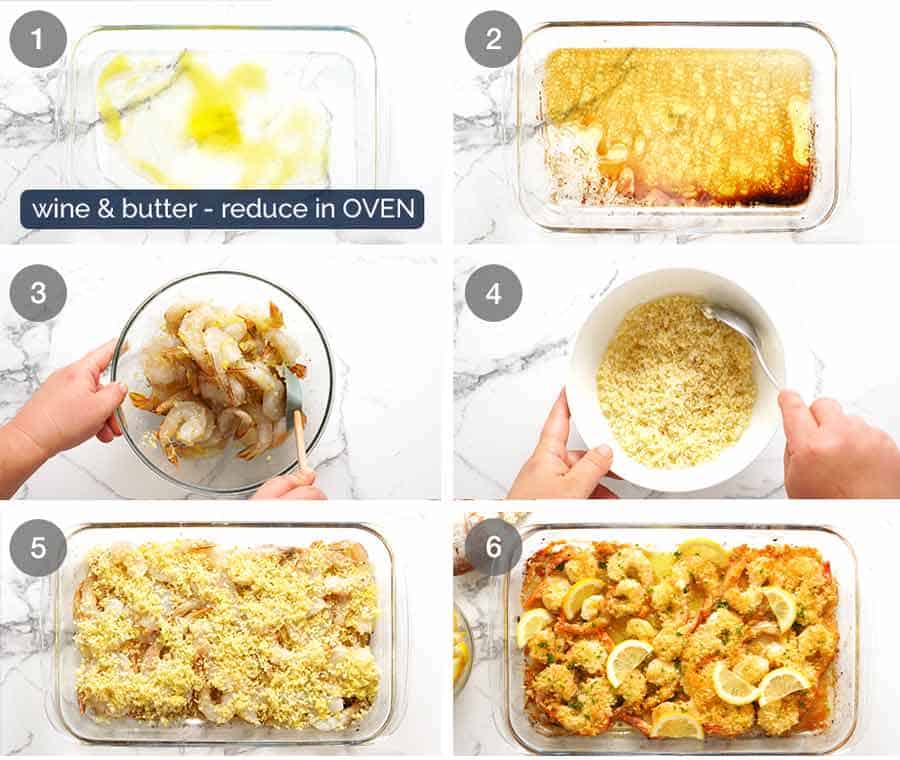 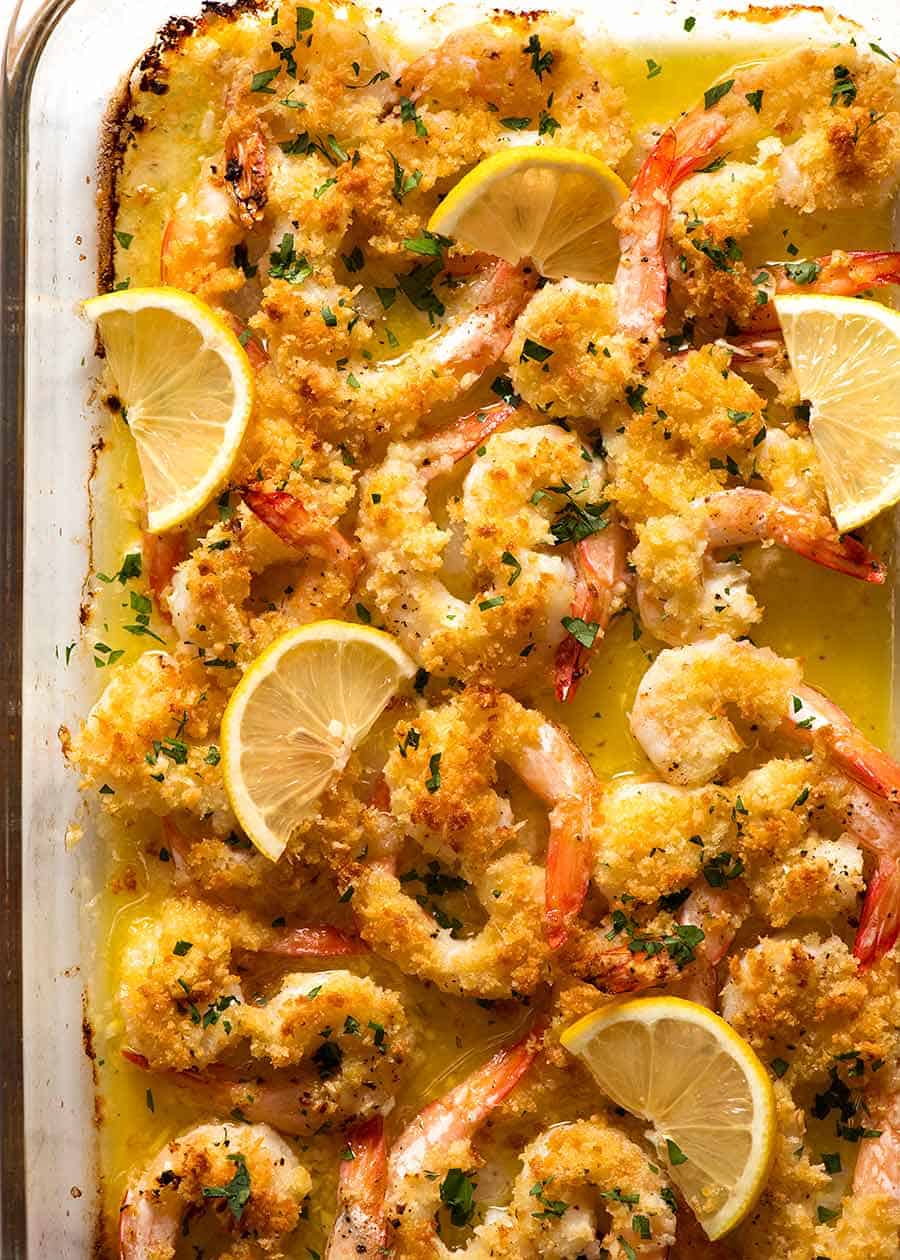 And here’s what you end up with:

The sauce that comes with this Baked Shrimp really is amazing. Even if it was just lemon and butter, it would be delicious. But with the white wine reduction, it’s INCREDIBLE!!! 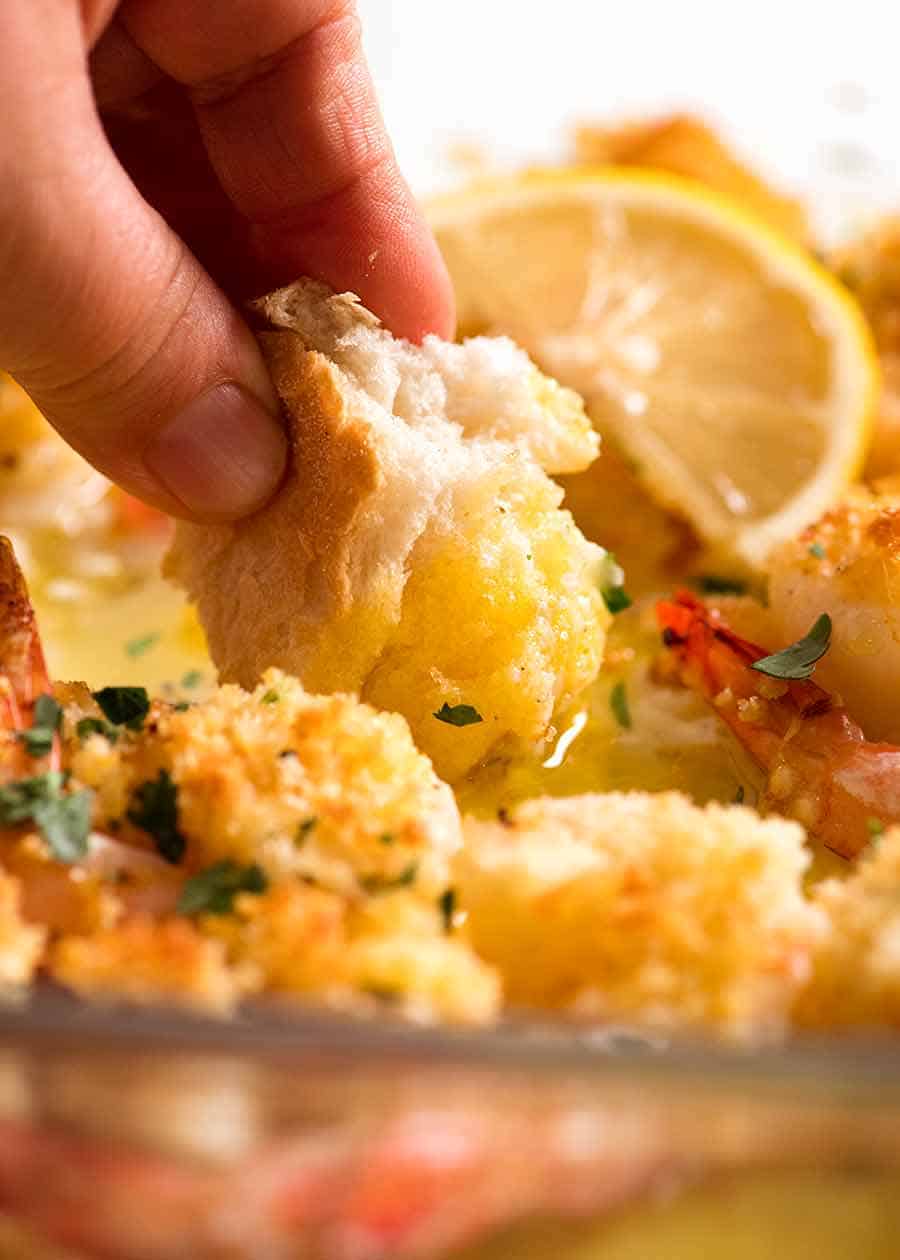 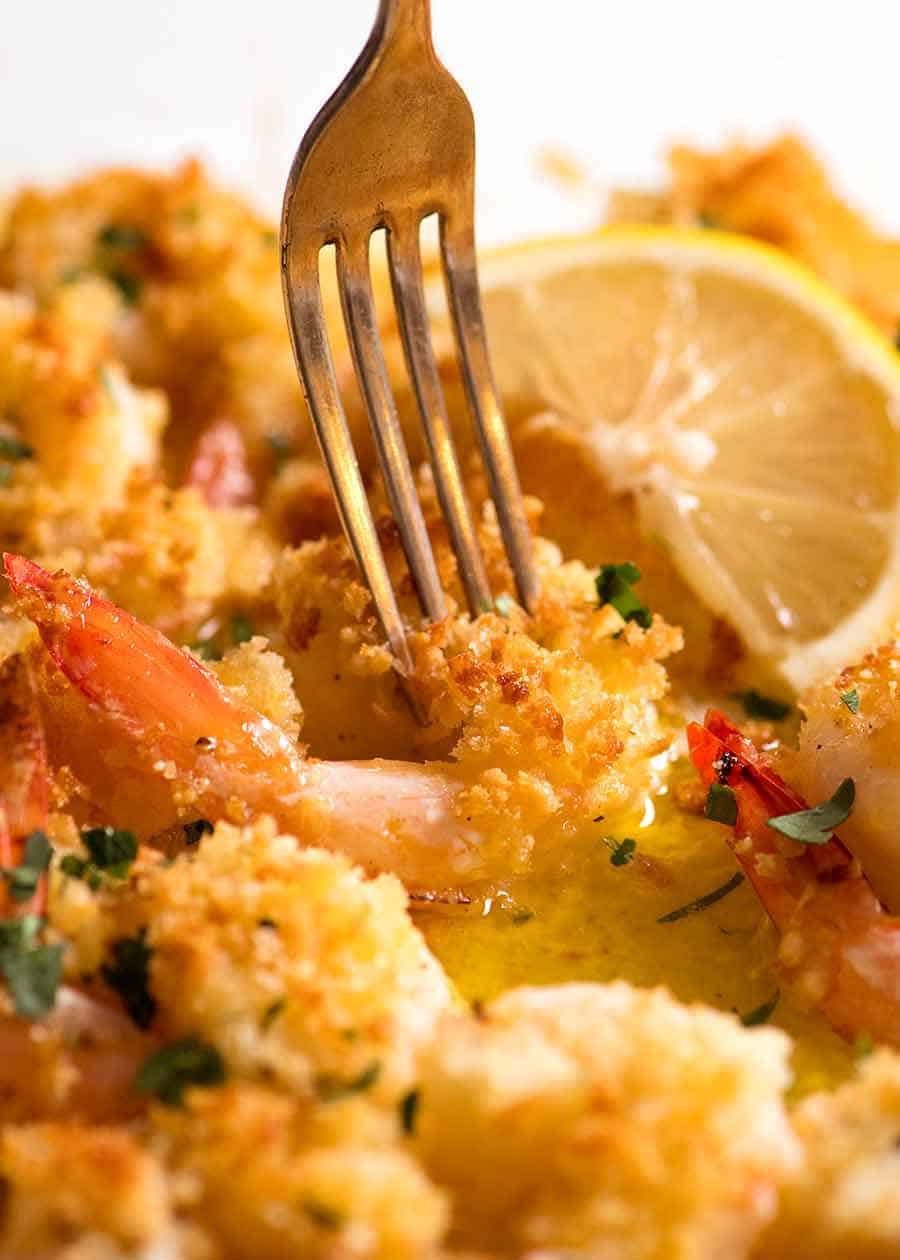 Recipes like this Baked Shrimp are my jam. It’s incredibly simple, yet utterly delectable.

It’s got it all! Flavour, juiciness, texture, depth of flavour, tang from lemon, savoury from parmesan.

So few ingredients, so effortless.

PS I presume you figured it out from the outset, but just to clarify: prawns = shrimp.

I’m in Australia, and we call them prawns here. So most of my recipes are titled “prawns (shrimp)” but from time to time, depending on the recipe and given I have a large proportion of US readers, I will title a recipe “shrimp” rather than prawns. 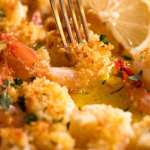 1. Prawns/shrimp – use large/jumbo ones if possible. If you only have small or medium ones, reduce cook time by a couple of minutes.

If using frozen, thaw thoroughly and drain off excess liquid. I used frozen pink prawns/shrimp from Costco (they look cooked but they’re raw!)

2. Panko breadcrumbs – breadcrumbs that are larger than normal breadcrumbs so you get incredible extra crunch! Find them in the Asian section of everyday supermarkets, and next to ordinary breadcrumbs. But they’re cheaper at Asian stores!

3. Glass and heat – Pyrex and Anchor Hocking are fine at 240°C/450°F, and for the short broil/grill time required to brown top a touch. If you’re concerned, use metal instead – just use a pan where the shrimp/prawns fit fairly snugly rather than spread out (minimise breadcrumbs dropping into sauce).

4. Nutrition per serving, assuming all sauce is consumed.

Originally published August 2019. Tidied up for some housekeeping matters July 2020 – no change to recipe!

Too much garlic in this Baked Shrimp for Dozer. So I offered him something else to taste test instead (this Bacon and Egg Muffin – with a whole egg baked inside!) – and he seemed totally ok with it. 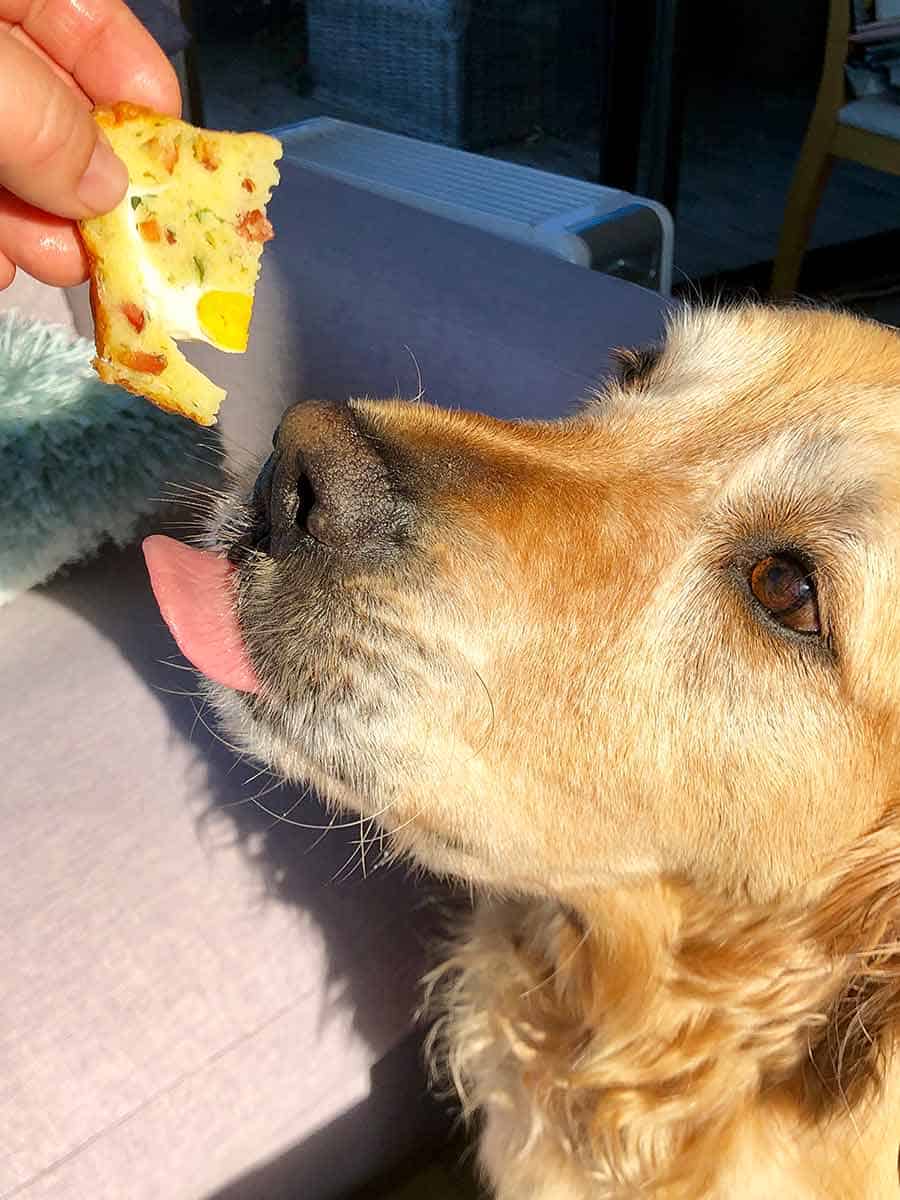