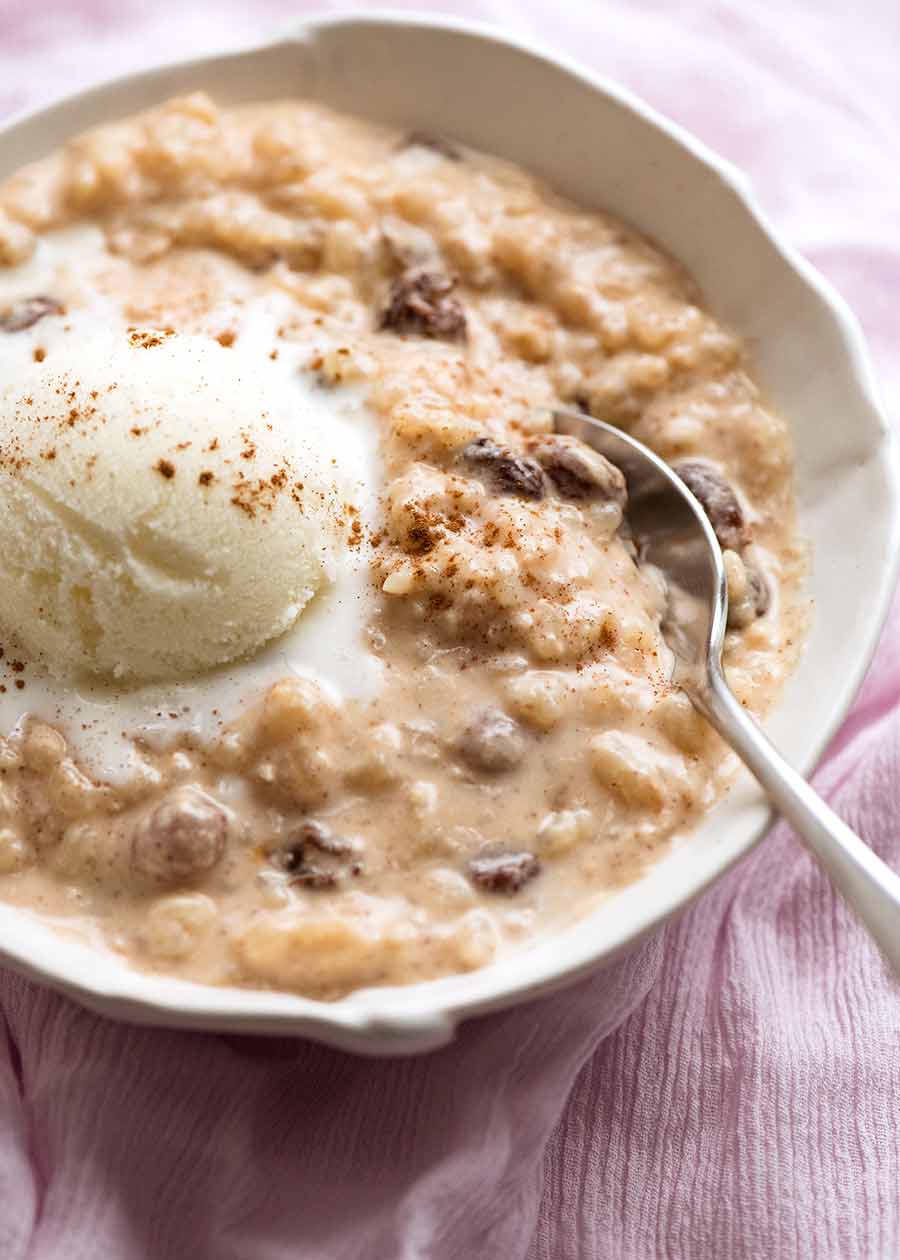 Serve it plain, straight out of the pot, or take it over the top with a scoop of vanilla ice cream!

I am pretty sure this is the ultimate emergency cosy winter dessert.

It takes all of 5 minutes to prep.

It’s completely effortless – just pour everything into a baking dish, then pop it in the oven.

It’s extremely low risk – all sorts of outcome variables are easy to rectify and adjust.

There’s no need to fuss with compotes or other toppings – it is really really good straight out of the pot as is (unlike plain rice pudding which I find desperately needs a fruit compote or something to dress it up).

And it’s terrifically economical, calling for just a handful of ingredients! 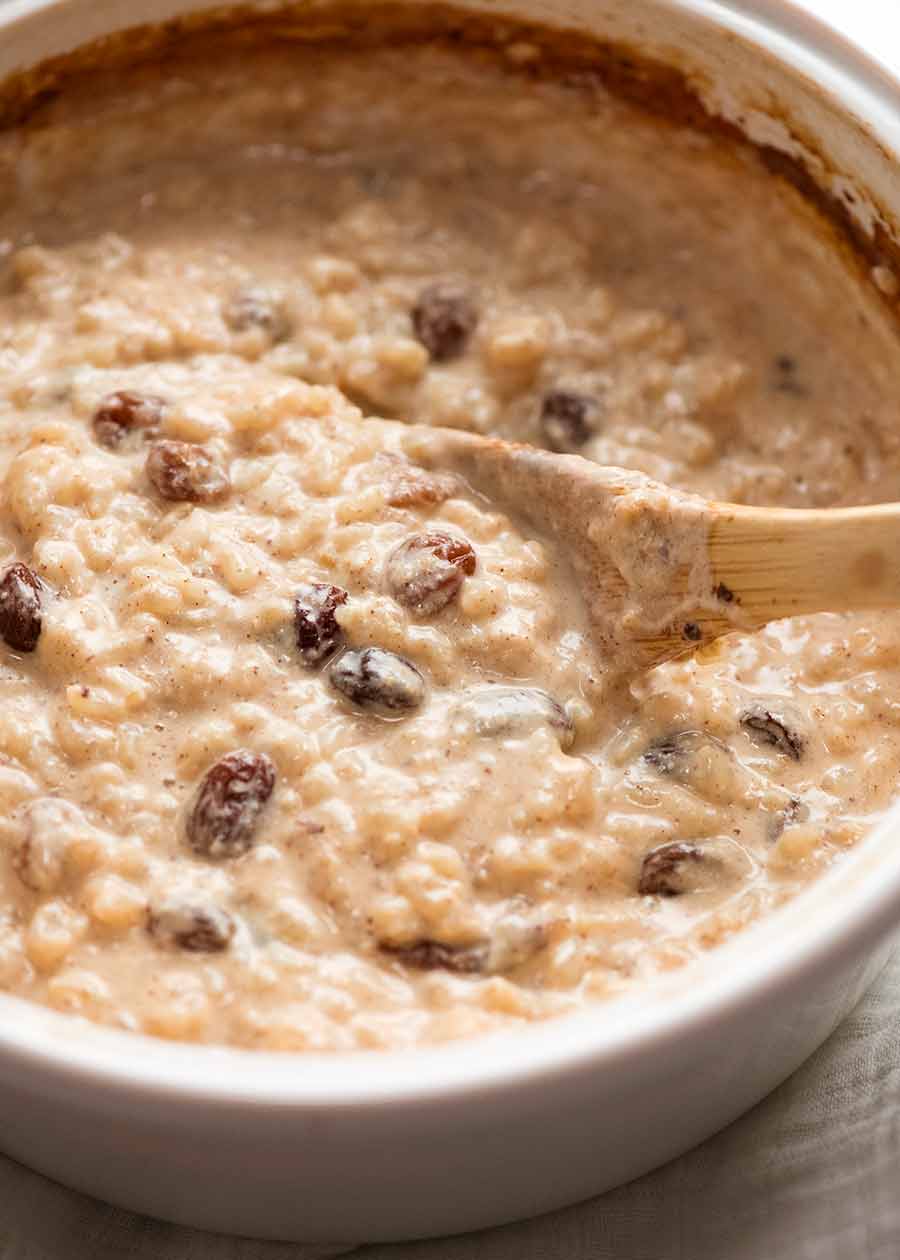 What goes in Cinnamon Rice Pudding

Here’s what you need to make this cinnamon Rice Pudding: 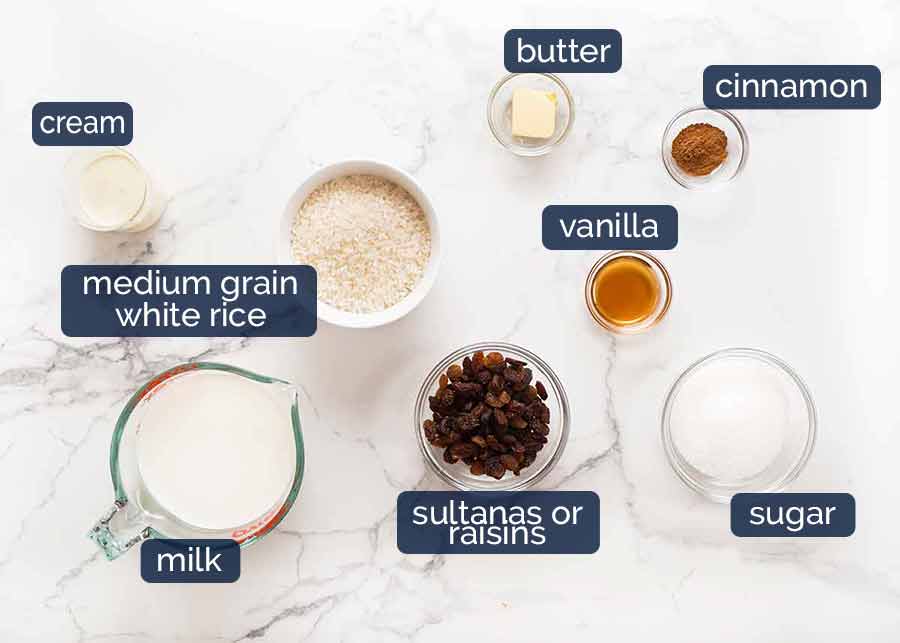 The rice type is really important for the desired outcome (she says wearily, after having tried 10 or so batches using various rice types – half the Northern Beaches have received samples of various versions I’ve made over the past few weeks!)

Medium grain rice – In my view, the best rice (by a long shot) is medium grain white rice, uncooked. It makes a creamy rice pudding with rice grains that are soft but not mushy (read: baby food). The rice and creamy sauce meld together beautifully, becoming one BUT without being mush. It’s certainly the benchmark for upscale restaurants.

Long grain rice – If you want firm rice grains, then use long grain white rice. In my personal opinion, it doesn’t have as nice a mouthfeel because the rice grains don’t “meld” with the sauce – there is too great a textural contrast. The thing with long grain rice is that here is no in between – it’s either firm or if overcooked it breaks down into unpleasant mush. We want the middle ground that medium grain rice can deliver!

Basmati rice – I haven’t tried it with basmati rice because I don’t associate the flavour with rice pudding, but I suspect it will be like long grain.

Rice needs to be uncooked – because stirring the raw rice as it cooks loosens the starch which is what thickens the milk mixture to make the sauce creamy. And this is the reason why it is illegal to stir when cooking rice for meals – because we want fluffy rice for our stir fries, we don’t want to make the cooking water creamy!

And a quick note on the other ingredients!

How to make rice pudding – in the oven

A notorious problem with stovetop rice pudding is that it catches on the base of the pot due to the sugar. So stovetop recipes call for constant stirring, like with risottos.

Just bake it. So much easier, just as creamy. Dump and bake, and stir just twice during the bake time. 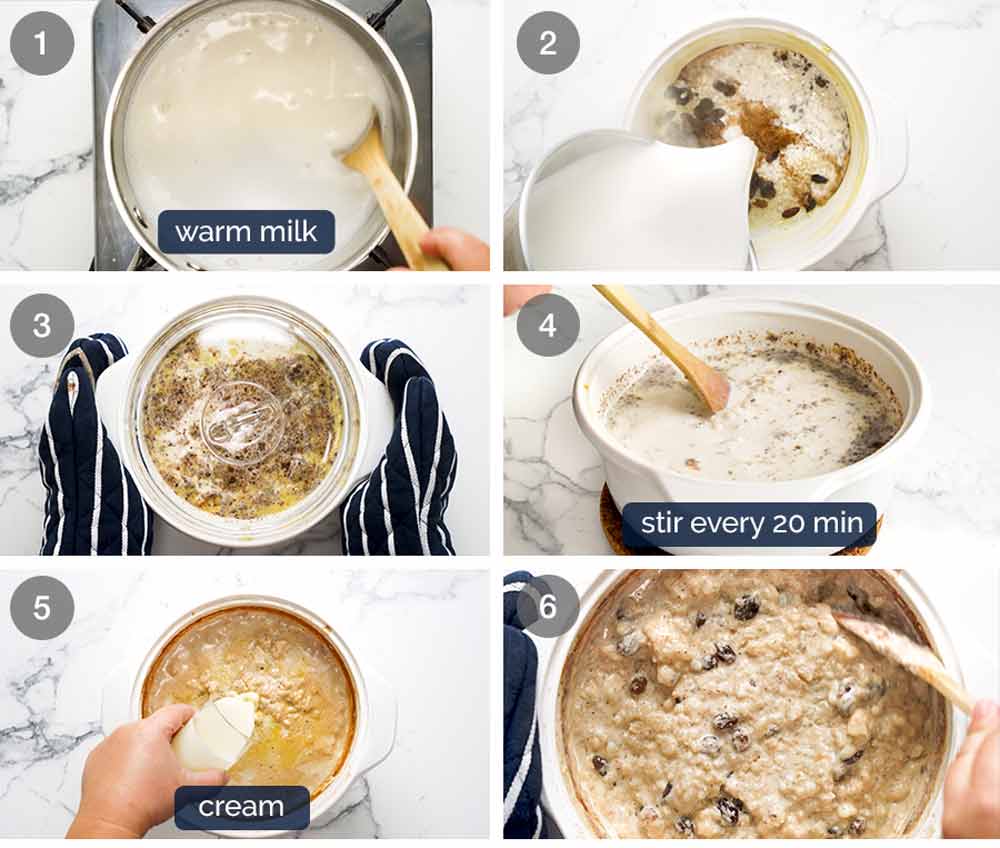 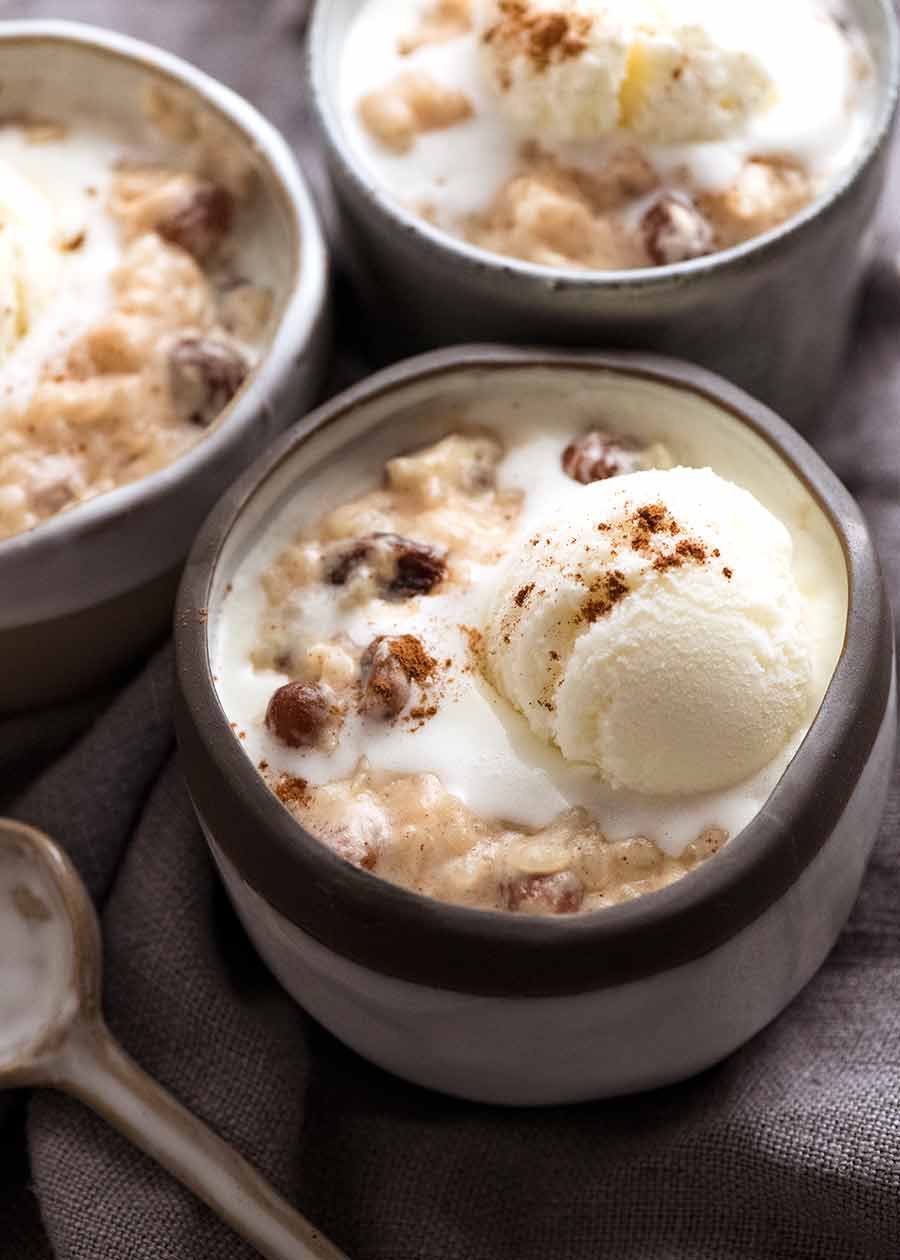 What to serve with Cinnamon Rice Pudding

If it’s a plain vanilla rice pudding (and you can totally do that by leaving out the cinnamon and sultanas in this recipe) then I really feel like you need a fruit compote or similar to put on top to turn it into a dessert that I can get really excited about. (Try the Strawberry Sauce in this Cheesecake).

But with just a little bit of cinnamon and sultanas, it takes the bland into OMG this is sooooo good! territory which is where I always like my food to be.

Then to take it over the top, try it with a scoop of vanilla ice cream. In my simple mind, this takes it from a quick dessert for a family meal, to guest worthy. It’s that addictive combination of warm and cold that we love with all our favourite cosy desserts, like Apple Crumble, Chocolate Pudding, Butterscotch Pudding.

Effortless cosy food. It’s got my name written all over it! – Nagi x 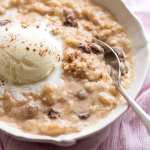 Recipe video above. A cosy, creamy rice pudding with the perfect soft rice texture – but not mushy and gluey. A hint of cinmamon and handful of raisins really elevates this into a dessert that can be served just as it is, straight out of the pot, rather than fussing with making a compote or similar that you really do need for plain rice puddings. But a scoop of vanilla ice cream will really take it over the top!
Course Dessert
Cuisine Western
Keyword rice pudding
Prep Time 5 minutes
Cook Time 1 hour
Servings 5 – 6 people
Calories 309kcal
Author Nagi

1. Milk – haven’t tried non dairy but I see no reason why it wouldn’t work.

For coconut milk, use 2 cups coconut milk and 1 cup water in place of dairy milk (but skip the cinnamon, I’d stir through some lime zest at the end and top with pineapple or mango for a tropical / South East Asian style)

2. Rice – I’ve tried all sorts of rice types and uncooked medium grain is by far the best for rice pudding, followed by risotto rice.

3. Sultanas / raisins – either is fine. I know 1/2 cup doesn’t sound like much but they expand about 3 – 4 times their size. Feel free to use other dried fruit of choice.

4. Cook times / tweaking – rice might take longer if your oven runs weak or you use a different type of rice. Just cover and keep cooking, adding water as necessary (you won’t need more milk), until the rice is cooked to your taste and it’s creamy as pictured in the video.

If it gets too thick, then just add hot water to loosen it up.

5. Storage – will firm up as it cools. Heat in microwave and add a splash of water to loosen it up. It reheats very well if you use medium grain rice (other rices are too temperamental and will either turn to mush or stay too hard). 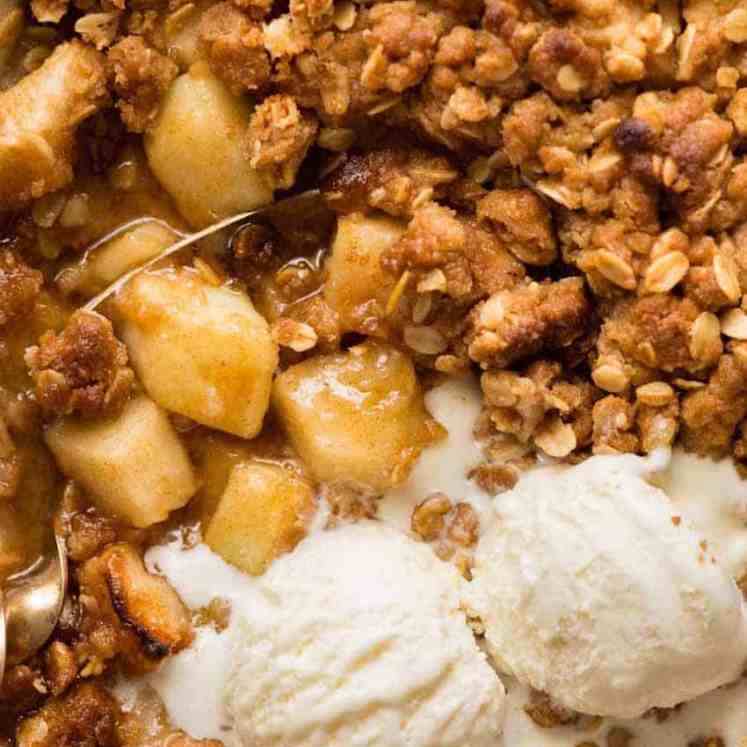 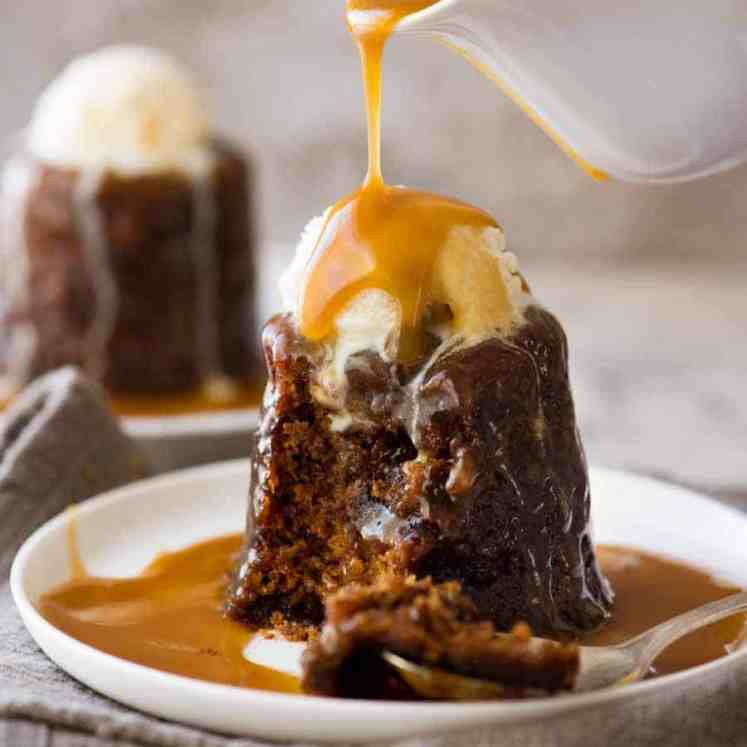 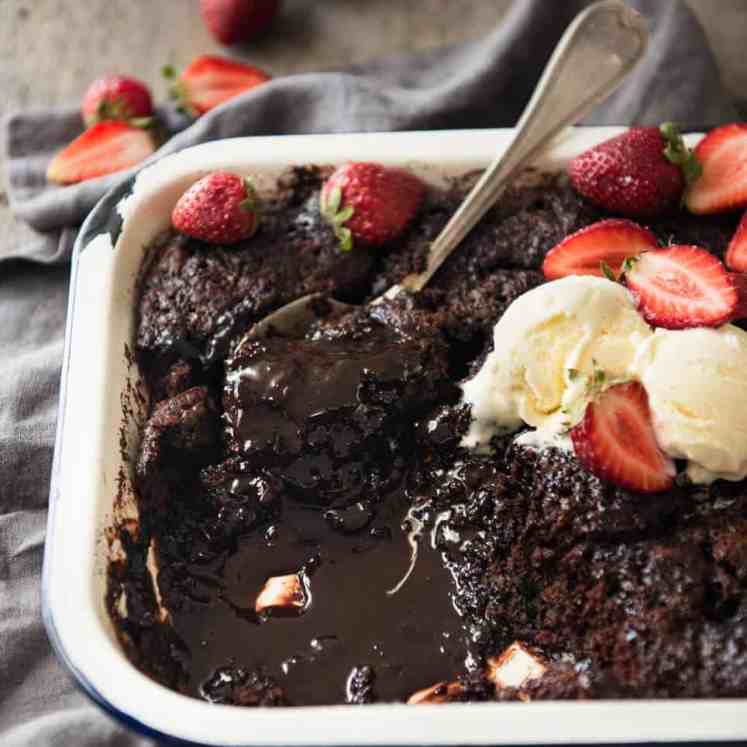 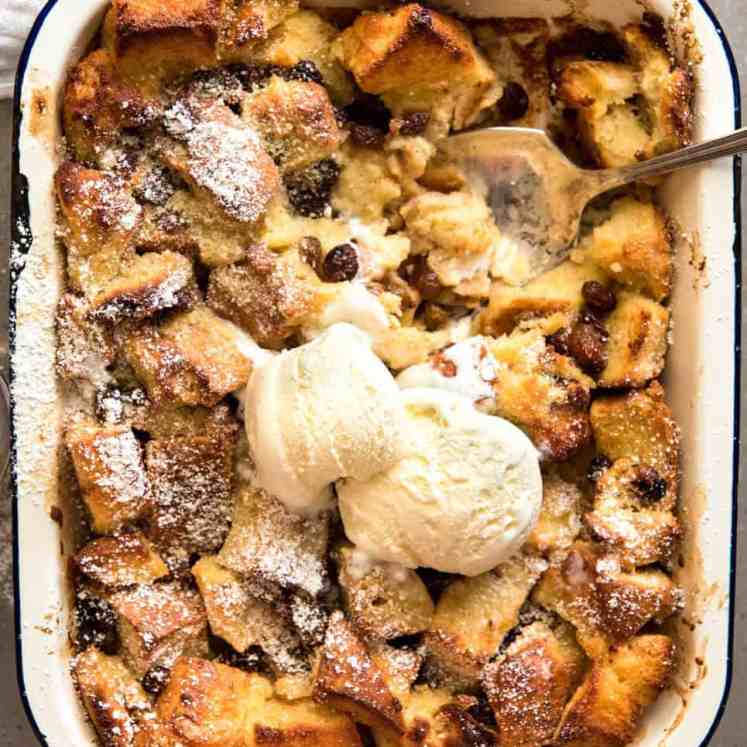 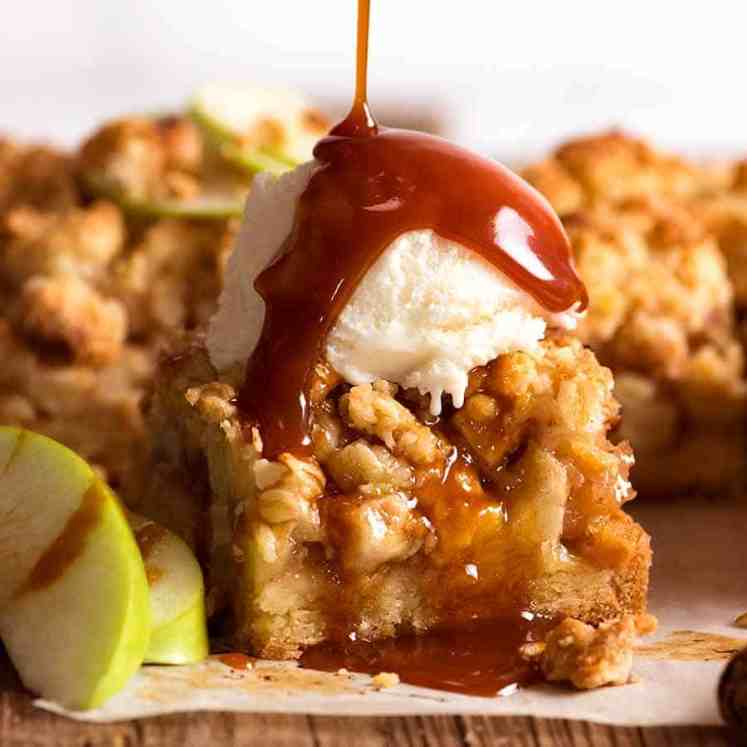 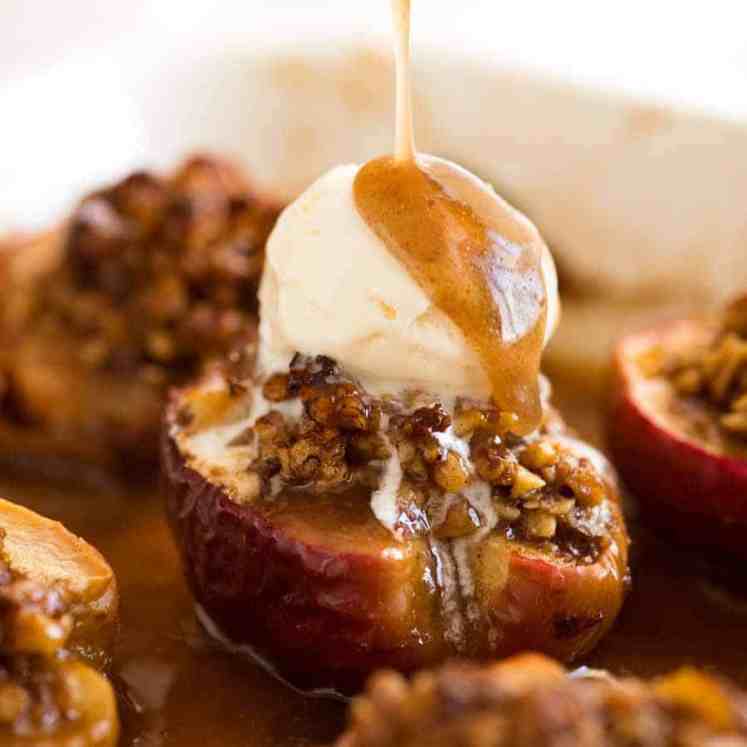 Wondering if he should clean up that dollop of rice pudding on the bench… the answer is NO! His cleaning duties are restricted to floor level only. 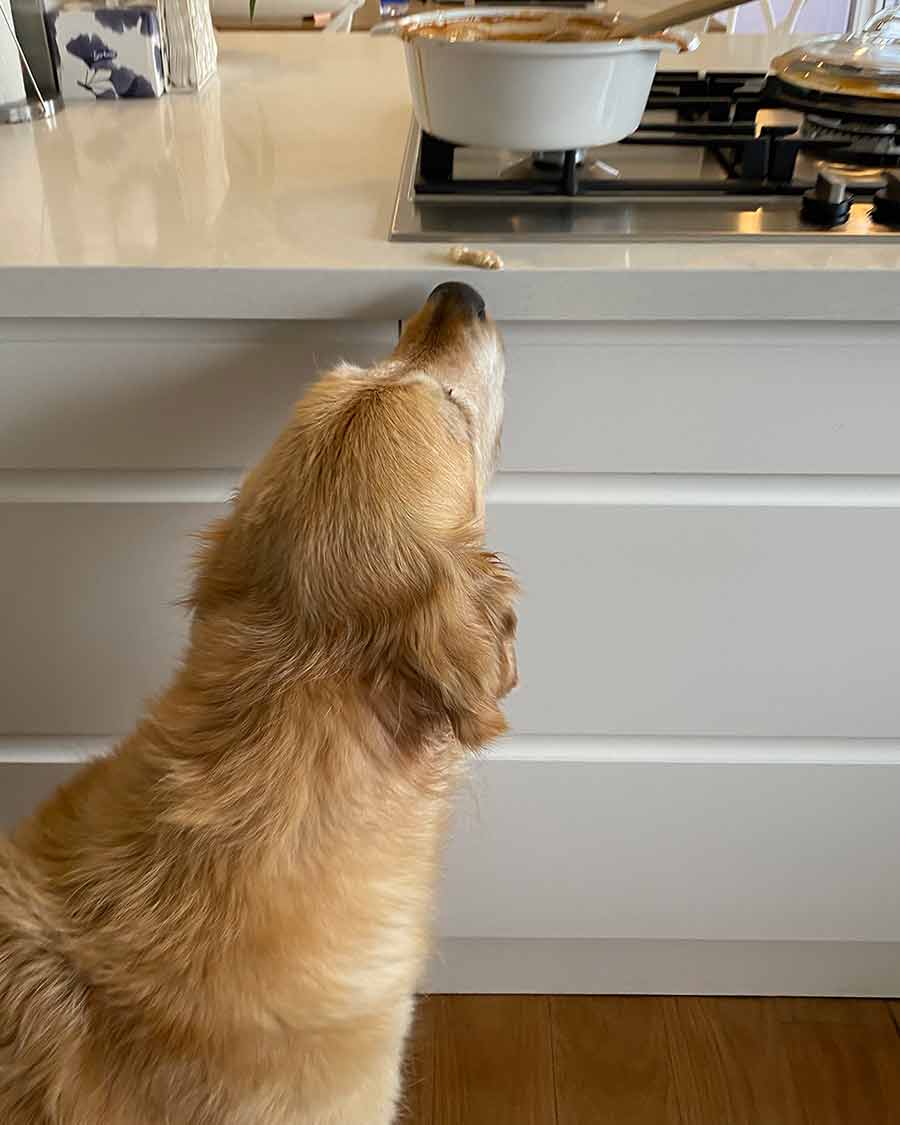