A free 14-day, flexible weight loss meal plan including breakfast, lunch and dinner and a shopping list. All recipes include calories and updated WW Smart Points. 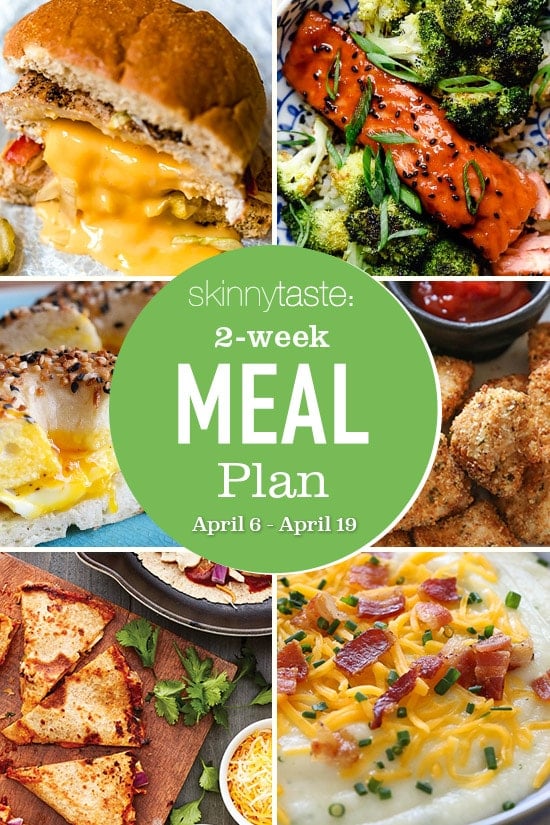 We are providing 2 WEEKS of breakfast, lunch and dinner. All meals in this 2-week plan are easy to follow, have few ingredients and utilize LOTS of pantry items.

Hi there. I’m Danielle Hazard (@true-eats on IG and True Eats on Facebook), and I’ve had the pleasure of working with Gina for the past 5 + years, helping with weekly meal planning, recipe development and testing, and cooking tips for all things Skinnytaste.

WHAT a crazy time we are living through, right?!?! Here, in California, we are only allowed to leave our home to shop for essentials until further notice. Also, experts recommend we shop for 2 weeks of groceries at a time to limit trips. That being said, Gina and I thought it would be a good idea to create a meal plan to work around these restrictions to make meal planning easier for YOU. What’s different this week?

We are providing 2 WEEKS of breakfast, lunch and dinner. All meals in this 2-week plan are easy to follow, have few ingredients and utilize LOTS of pantry items. Since most are required to work from home AND kids are out of school, we’re feeding our loved ones at home ALL DAY. So, rather  than sticking to our usual weekday breakfast and lunches for one, we’ve chosen recipes, for all meals, that feed 4. If you’re feeding fewer people, share with friends or neighbors or freeze leftovers for the coming weeks. Alternatively, you can buy less and adjust the recipes as needed.

If you can’t get certain ingredients or are only allowed to buy a limited amount (here in San Diego, it’s eggs and beans), feel free to move things around in the plan until you can get what you need. Or, just sub something simple like your favorite cereal or open-faced sandwich. As always, the meal plans have PLENTY of wiggle room for you to add snacks (I love apples or bananas with peanut butter, a hand full of mixed nuts, hummus and veggies or light microwave popcorn), coffee, beverages, dessert, wine, etc.

If you’ve got kids at home, check out these kid-friendly snacks:

To satisfy your sweet tooth without breaking your (calorie) bank, check out these EASY dessert options with few ingredients:

Just don’t forget to add them to your completely comprehensive grocery lists, which are also included below. For those hard-to-find ingredients, Amazon is my go-to. Just be aware that shipping times may be longer than usual because of increased demand.

Last but not least, here are some additional tips to help maximize your ingredients and limit waste, especially during this CRAZY time:

We’ve included some Easter/Passover favorites on Sunday so please STAY HOME and help flatten that curve!

(Side note: if you are keeping Kosher for Passover, I found THIS great database to help you find foods that fit the bill)

We hope you are all safe and well! Happy Cooking!

WW has changed their plan to now include a Blue, Purple and Green Plan. All the recipes on my blog are updated for the Blue plan. I’ve been updating all my recipes (over 2000) and have completed 2019 with the other two colors, and I am working my way down so please be patient.

Lastly, if you’re on Facebook join the Skinnytaste Facebook Community where everyone’s sharing photos of recipes they are making, you can join here. I’m loving all the ideas everyone’s sharing! If you wish to get on the email list, you can subscribe here so you never miss a meal plan!

Also, if you don’t have the Skinnytaste Meal Planner, now would be a great time to get one to help you stay on track! There was a print error last year, but it’s perfect now! You can order it here!

*This is just a guide, women should aim for around 1500 calories per day. Here’s a helpful calculator to estimate
your calorie needs. I’ve left plenty of wiggle room for you to add more food such as coffee, beverages, fruits, snacks, dessert, wine, etc.