The other day I was scrolling through Pinterest and an image of some cheesy, tomatoey gnocchi made me stop in my tracks and drool a little. But the funny part is that at first I thought the gnocchi were white beans. Long story short, I eventually realized that they were gnocchi, but was still stuck on this idea of white beans baked with marinara and cheese. I loved the idea of swapping gnocchi with high fiber beans, so I had to give it a shot. These White Beans with Mushrooms and Marinara lived up to everything I would hoping they would be, and this recipe has quite a bit of potential for customization, so I can’t wait to share it with you! 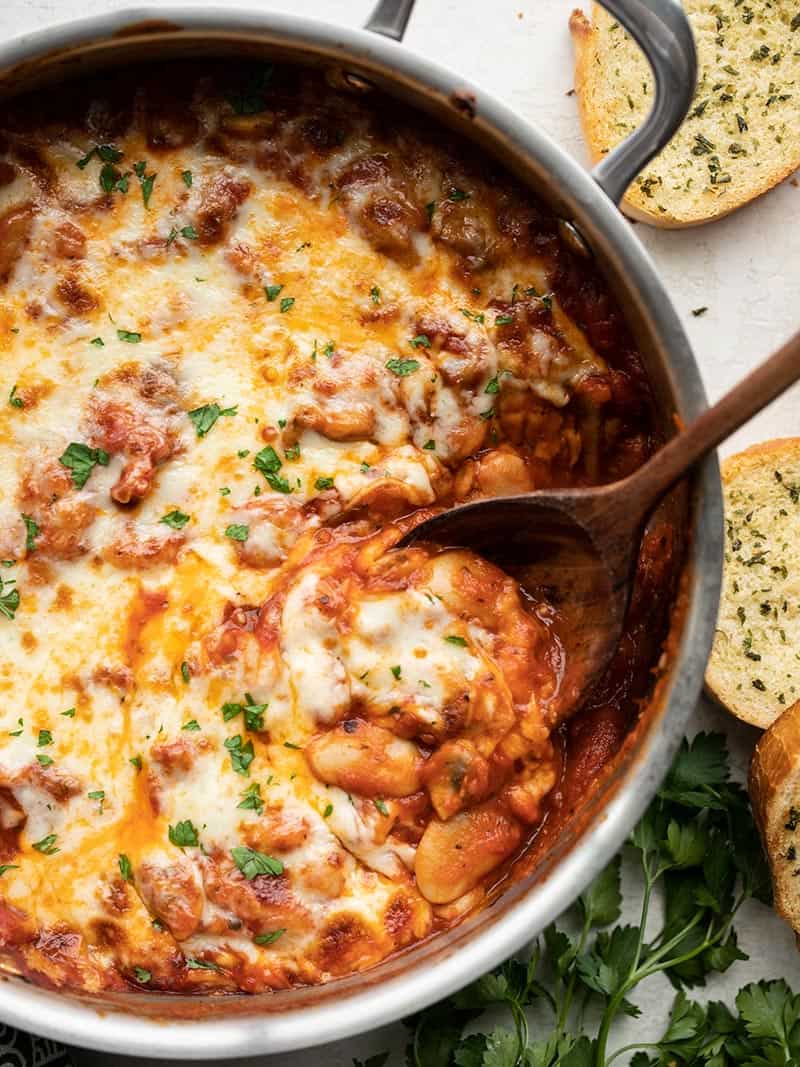 What Kind of White Beans Should I Use?

I used large butter beans for this recipe because they’re huge and look similar to gnocchi. If you don’t like butter beans or can’t find them, cannellini beans are a good second choice because they are creamy in flavor, still slightly larger, and they hold their shape well. And while you can use navy beans, they’re my last choice for this dish because they’re small and they tend to break down easily, so you won’t get as good of a texture in the final dish.

Can I Add Meat?

What Other Vegetables can I Add?

If you’re not into mushrooms or are just looking for other vegetables to add in addition to the mushrooms, there are definitely some great options. Zucchini would match really well with these flavors, as would spinach. For zucchini, I suggest slicing and sautéing after the mushrooms. For spinach, stir it in after the sauce has heated through, just until it is wilted. Eggplant would also be amazing, just dice and sauté after the mushrooms.

How to Serve White Beans with Mushrooms and Marinara

You’ll want to sop up every drop of that marinara, so I suggest serving this dish with a side of Garlic Bread. Also, because garlic bread is always a good idea. You can also spoon this mixture over something like zoodles, a halved roasted eggplant, or, if you’re not trying to avoid pasta, just serve it over a bed of good ol’ pasta. 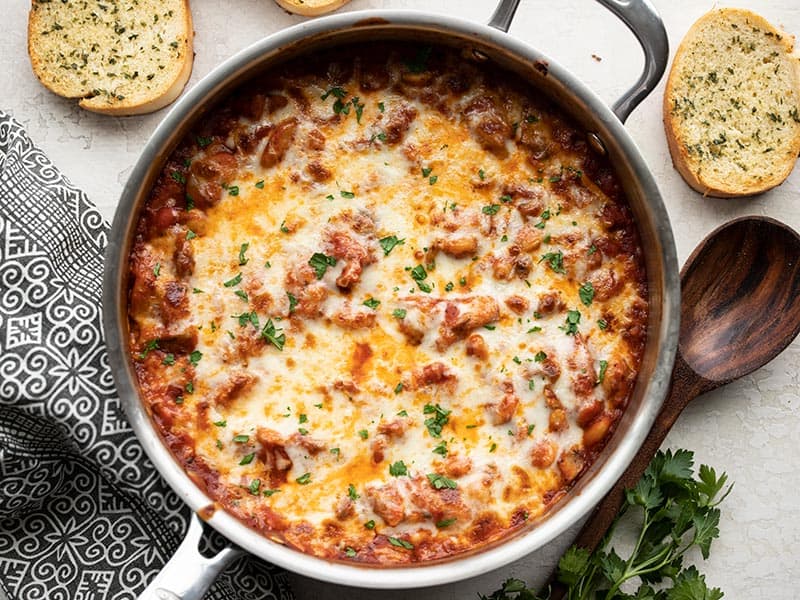 White Beans with Mushrooms and Marinara 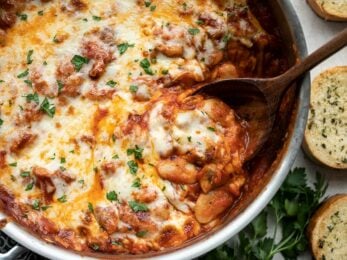 White beans make a fiber-filled swap for gnocchi in this cheesy, indulgent skillet full of white beans, mushrooms, and marinara.

*If you don’t have an oven safe skillet, simply transfer the beans, mushrooms, and marinara to a casserole dish before baking with the cheese.

Scroll down for the step by step photos! 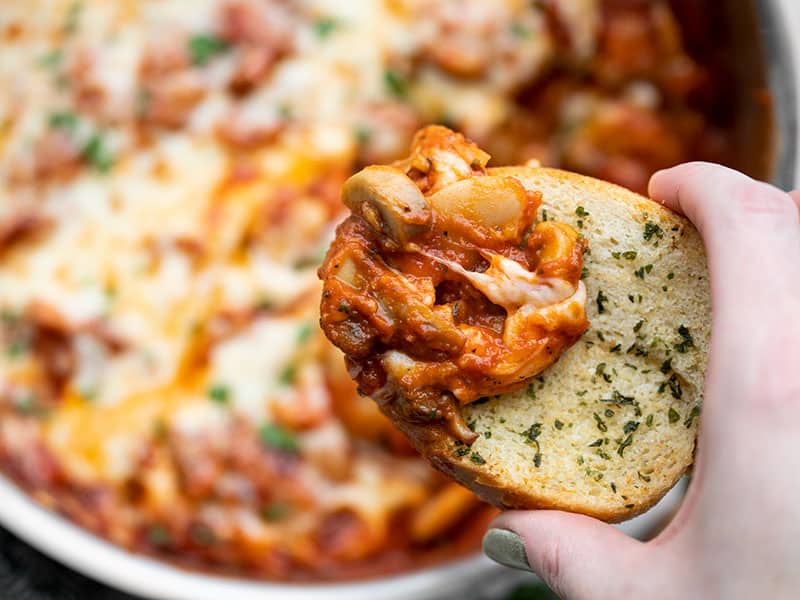 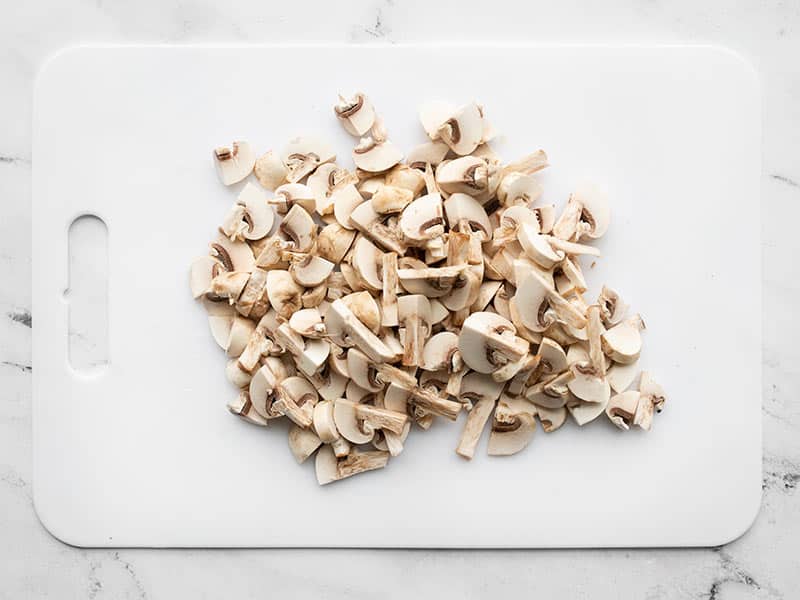 Preheat the oven to 400ºF. Wash and slice 8oz. mushrooms. 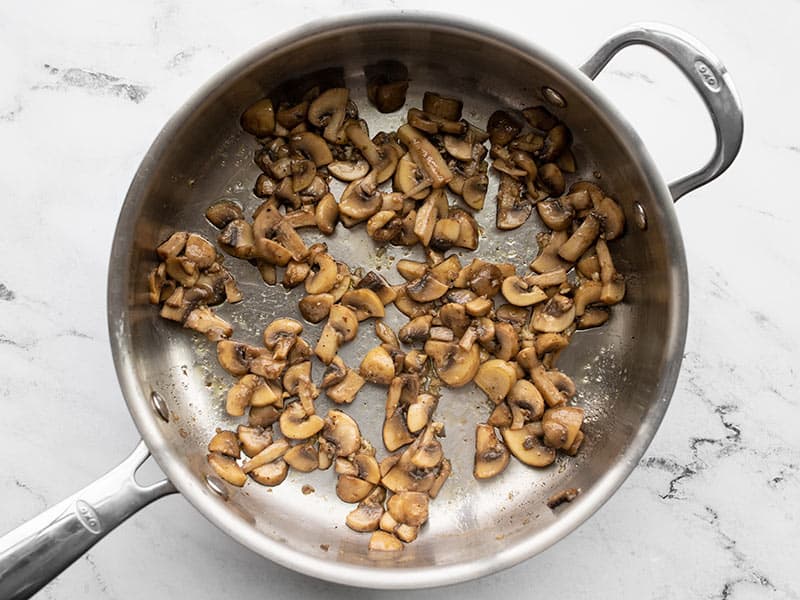 Add the sliced mushrooms to a deep skillet with 2 Tbsp olive oil and a pinch of salt and pepper. Sauté over medium until the mushrooms are wilted and the moisture has evaporated out of the skillet. While the mushrooms are sautéing, mince 2 cloves of garlic, then add them to the skillet and sauté for about 2 minutes more. 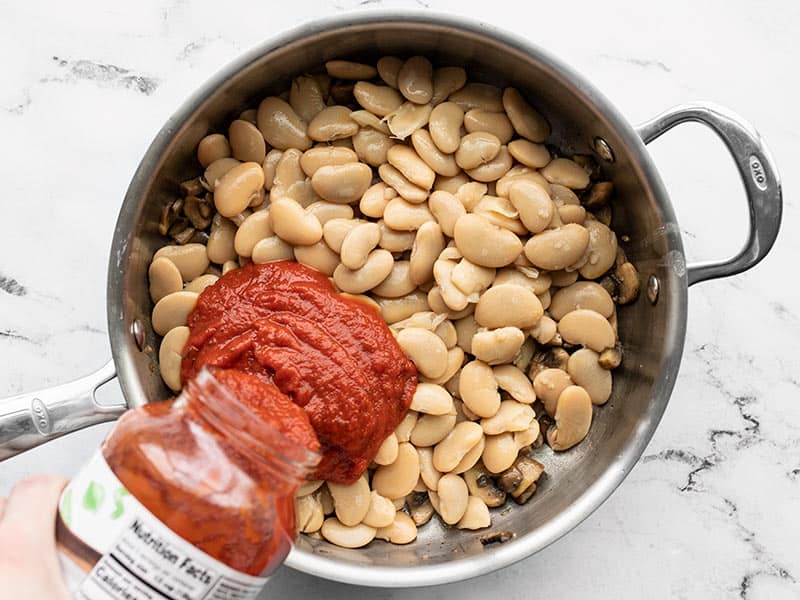 Rinse and drain two cans of butter beans, then add them to the skillet with 2 cups marinara (or more if you want it to be slightly saucier). Stir to combine. 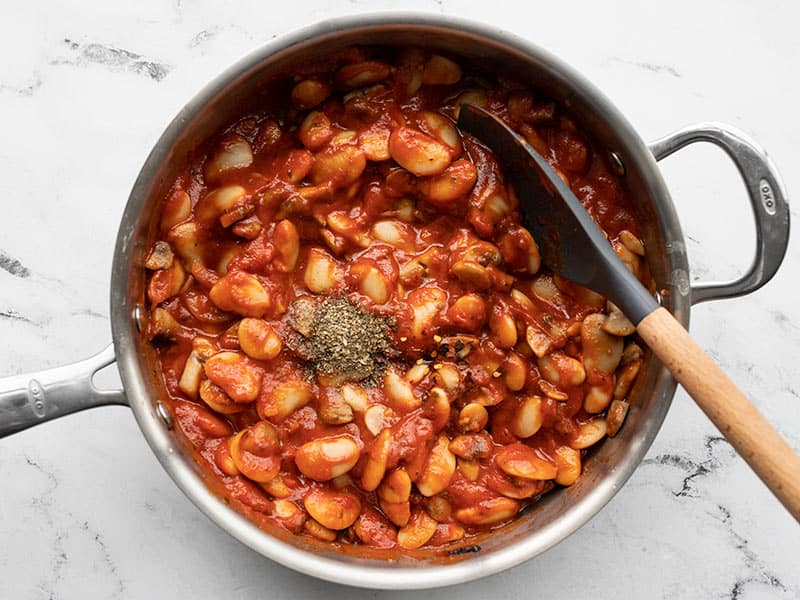 I like to amp up my jarred marinara a bit, so also add 1/2 tsp dried basil and a pinch of crushed red pepper. Stir them into the sauce, then allow the skillet to heat through, stirring occasionally (5 minutes). 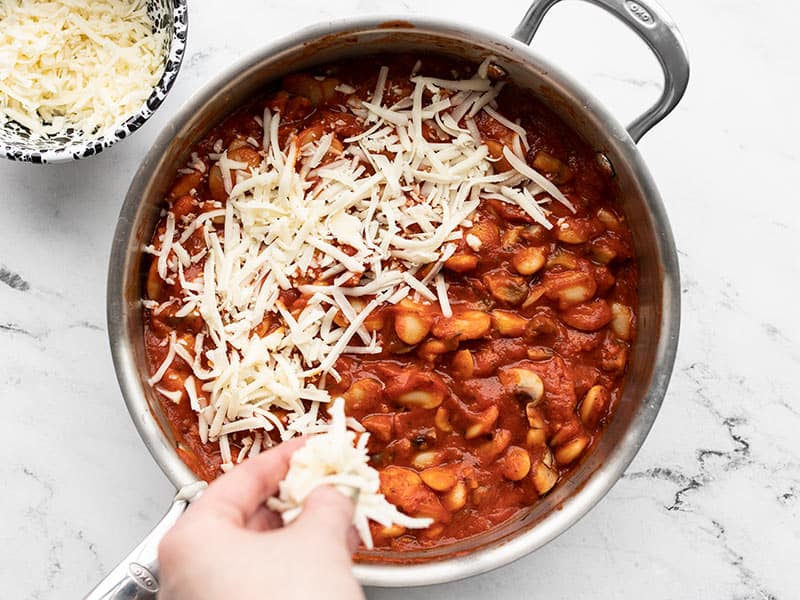 Shred 4 oz. of mozzarella, then sprinkle it on top of the skillet. (If you don’t have an oven safe skillet, transfer the beans and marinara to a casserole dish first.) 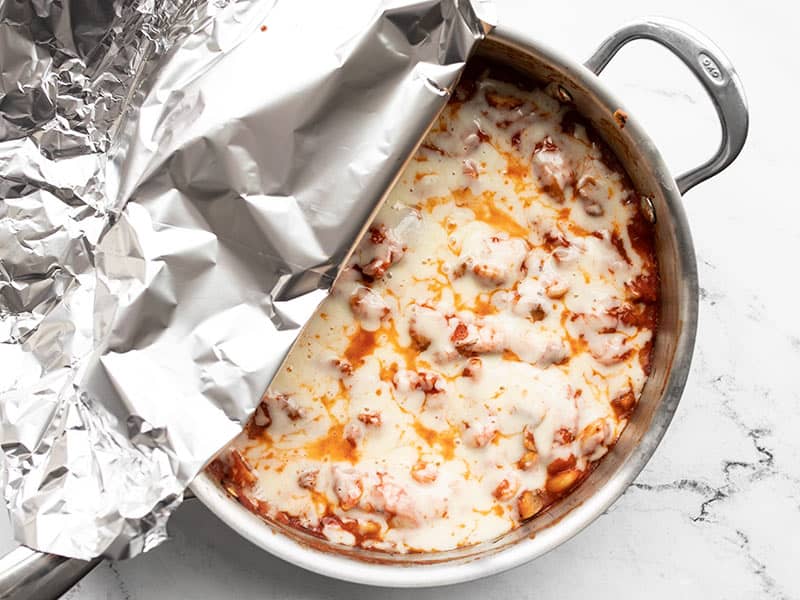 Cover the skillet with foil, then transfer to the preheated oven, and bake for 5-7 minutes, or until the cheese is melted. 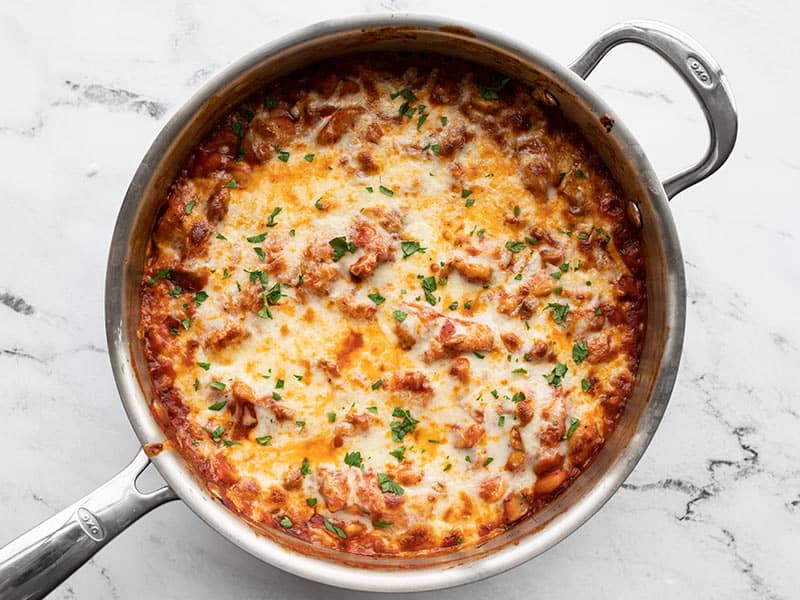 Remove the foil from the skillet, switch the oven from bake to broil, then broil a few minutes more to brown the cheese. Watch the skillet closely, as broiling can brown the cheese very quickly. (I also topped with a little chopped parsley for color, but it’s not needed for flavor). 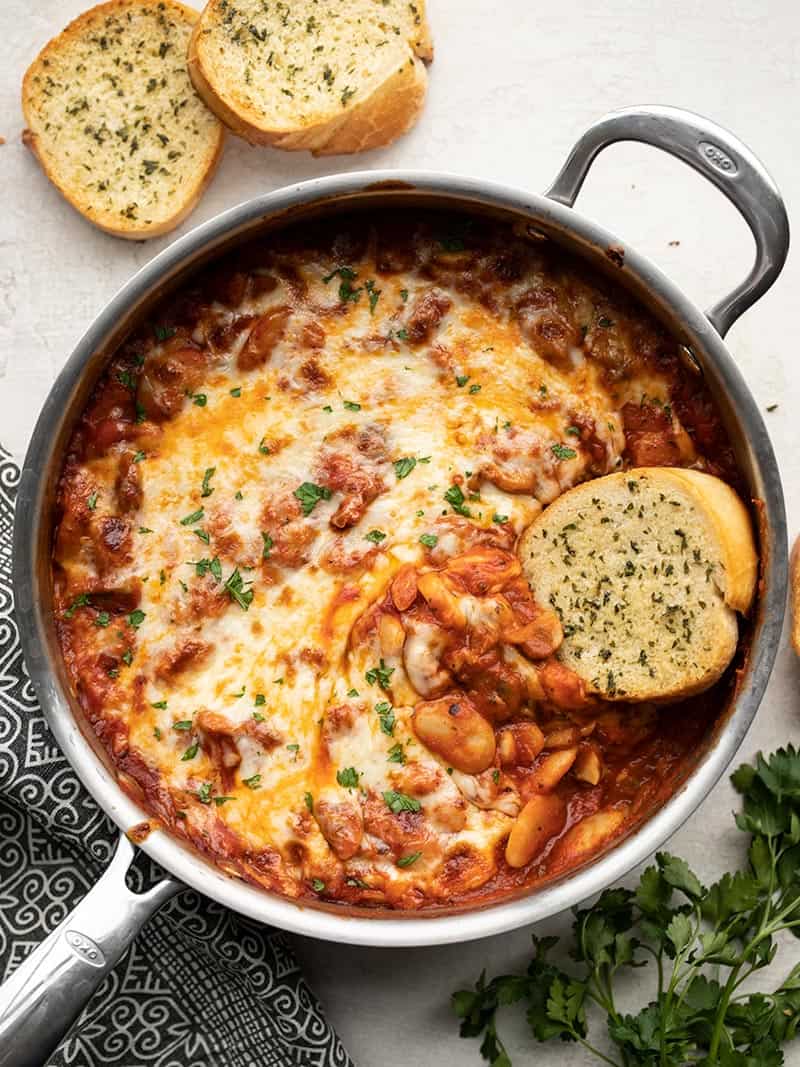 Serve hot with garlic bread for dipping, over roasted vegetables, or over pasta.

The post White Beans with Mushrooms and Marinara appeared first on Budget Bytes.