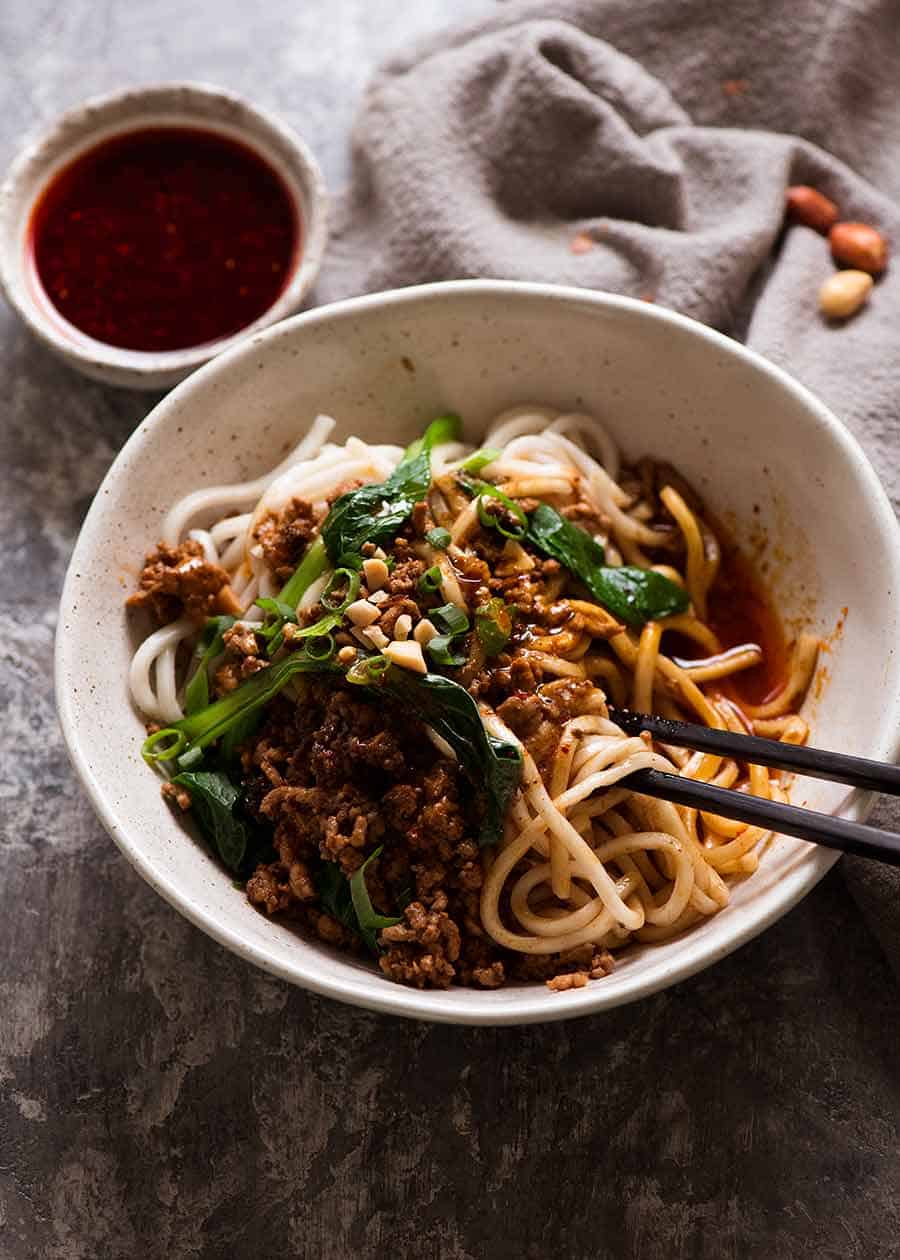 You’ll need to visit your local Asian grocery store but once you’ve gathered the ingredients, it’s a cinch to make! **Plus I’ve provided loads of substitution options**

The beautiful Northern Beaches area of Sydney in which I live is many things….but certainly not known for great authentic Sichuan food!!!

And given that Dan Dan Noodles is literally one of my all time top 3 foods, it was essential that I arm myself with a totally doable home version that is everything you want in a bowl of slippery, spicy noodles laced with the sesame flavoured Dan Dan Noodle Sauce, wafting with the scent of Chinese five spice.

With the signature slick of fiery red chilli sauce on the surface, it actually looks more fierce than it is. I’m one of those people who likes to think they can handle really spicy food – but actually, I can’t at all. So while the recipe provided has a good kick to it (I wouldn’t serving it to a toddler 😂), it is not blow-your-head-off spicy! 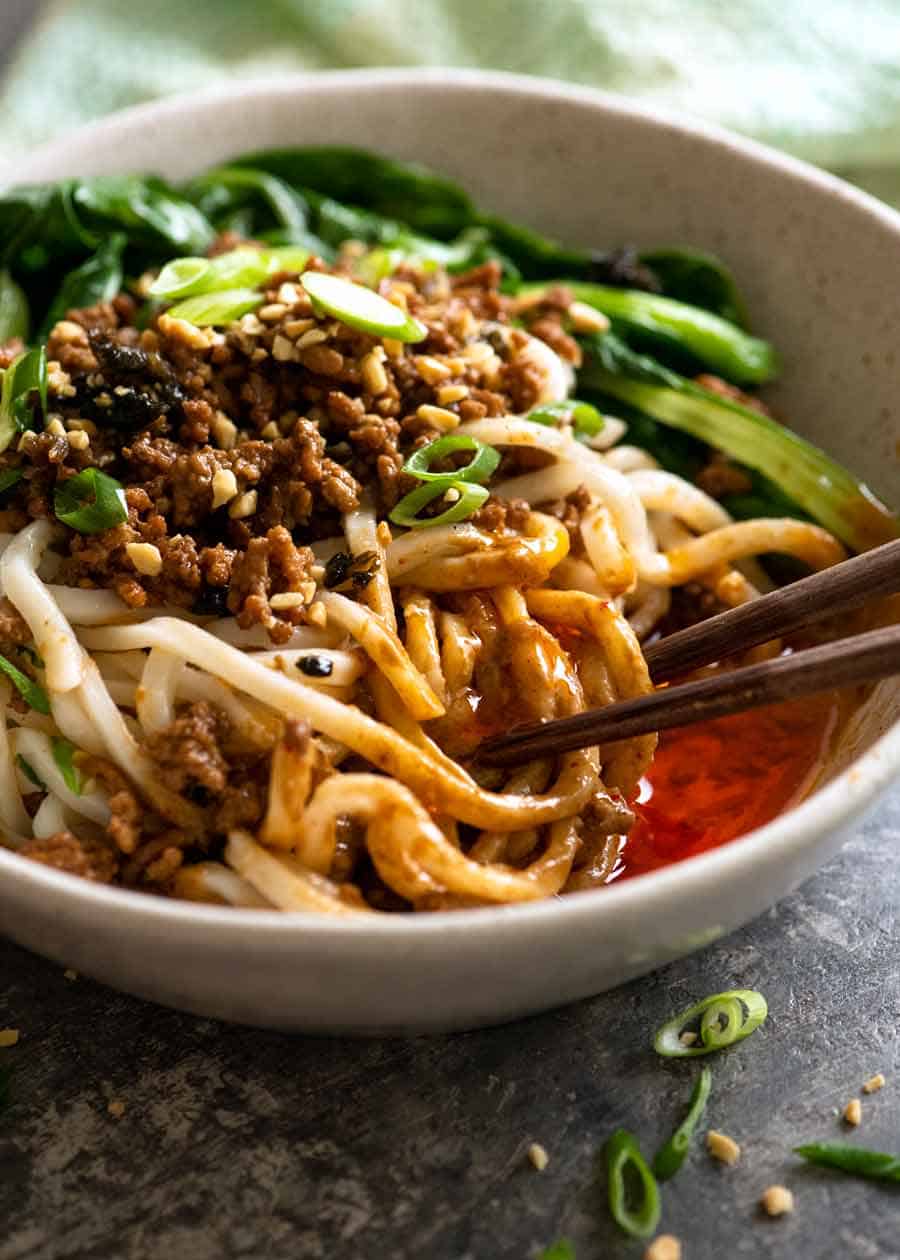 Usually I’d start with a visual of the ingredients, but in this case I think it’s better to give you an overview of how it’s assembled so you can see the different components of Dan Dan Noodles.

How to make Dan Dan Noodles

Unlike most noodles like everybody’s favourite Lo Mein and Chow Mein noodles, Dan Dan Noodles aren’t tossed together with sauce and all the “stuff”.

Instead, it’s layered as follows: 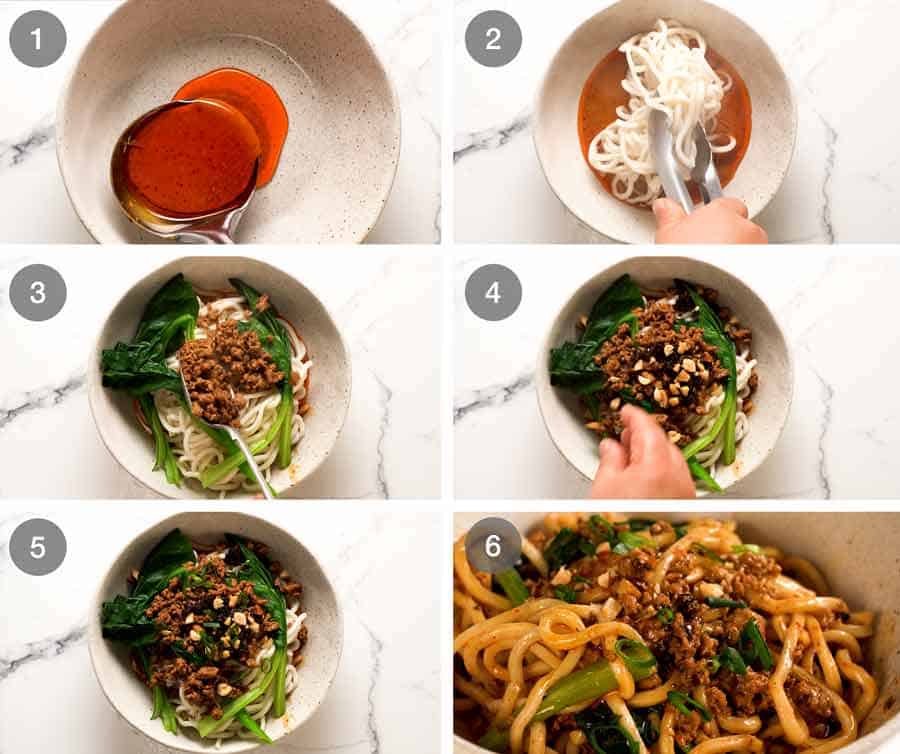 Here’s an overview of what you need and how to make each component for these spicy Sichuan noodles.

Here’s what goes in the sauce – it’s not cooked, it’s just mixed up in a bowl. 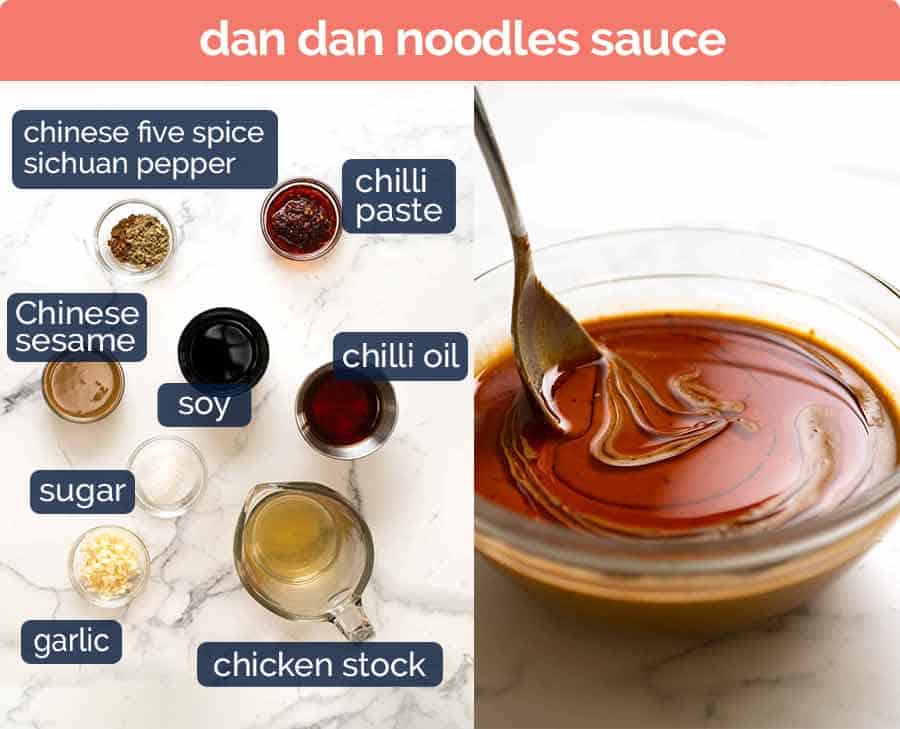 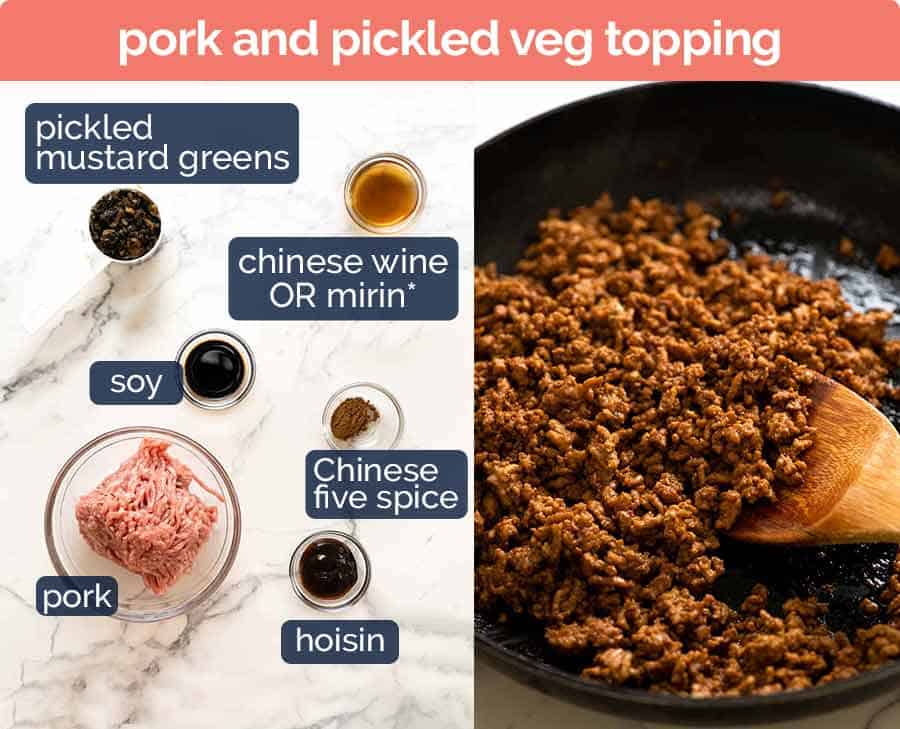 The making part is literally a less than 5 minute effort – just cook the pork, add the Chinese five spice flavoured sauce. Transfer to a bowl then just heat the pickled mustard greens (more on this below). 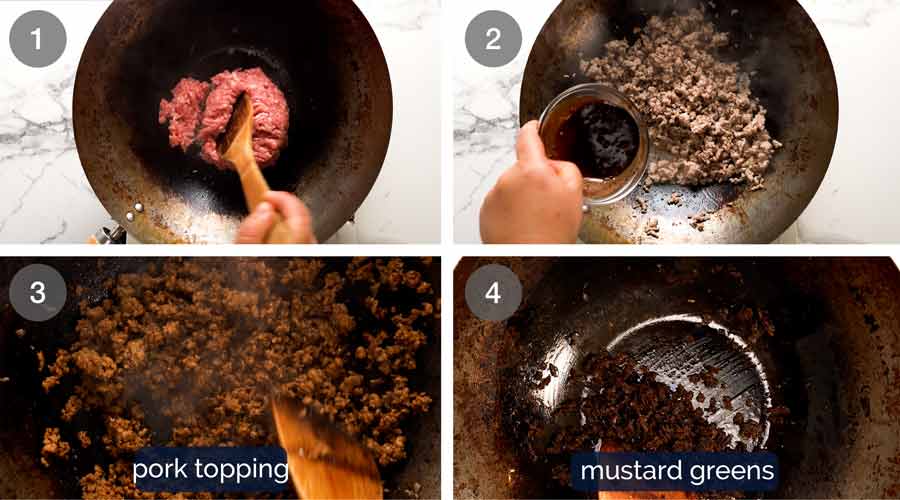 Firstly, don’t fret if you can’t find this, it’s not a make-or-break ingredient. Recipe only uses a sprinkle.

This is a signature ingredient used in Dan Dan Noodles. It’s Chinese pickled mustard greens (a type of green vegetable) that comes from the Sichuan region of China. It has the texture and saltiness of kimchi, but it’s not spicy. So that’s the best substitute – kimchi! 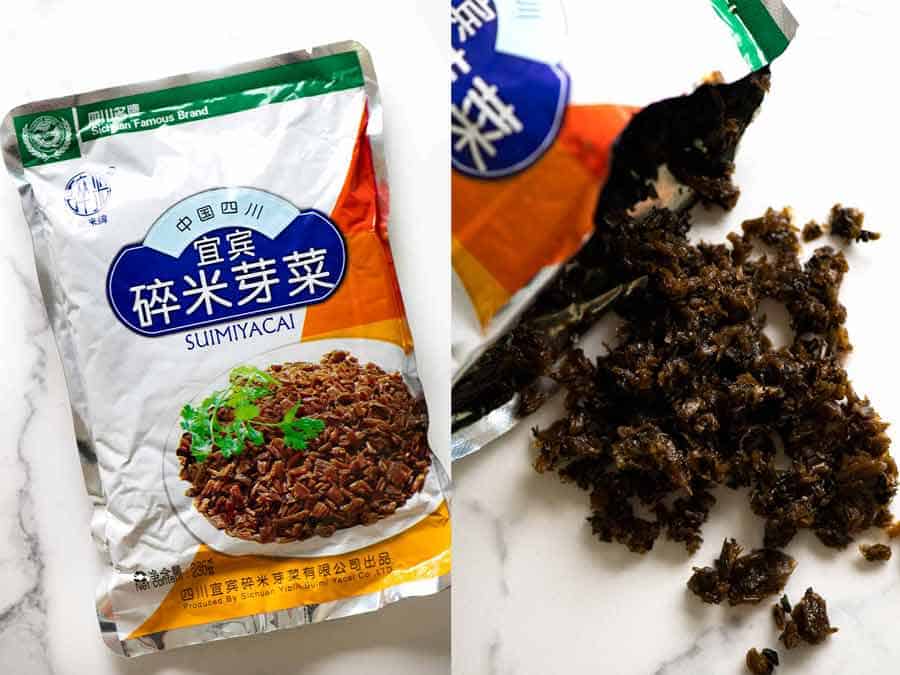 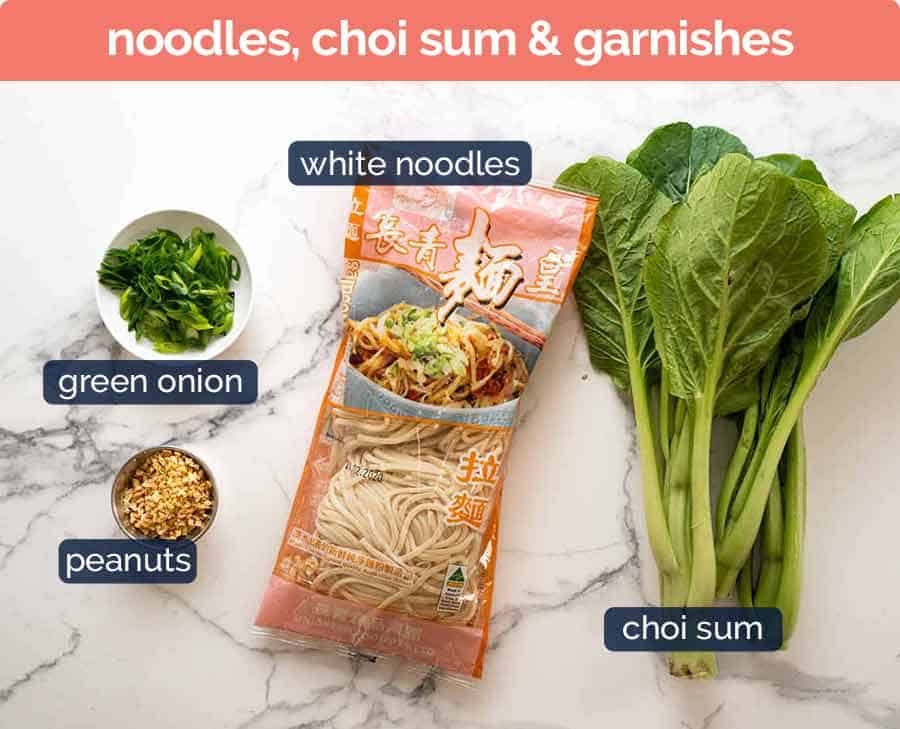 Cook the noodles first, then blanch the choi sum in the same water (just add it into the same pot and drain together for simplicity). 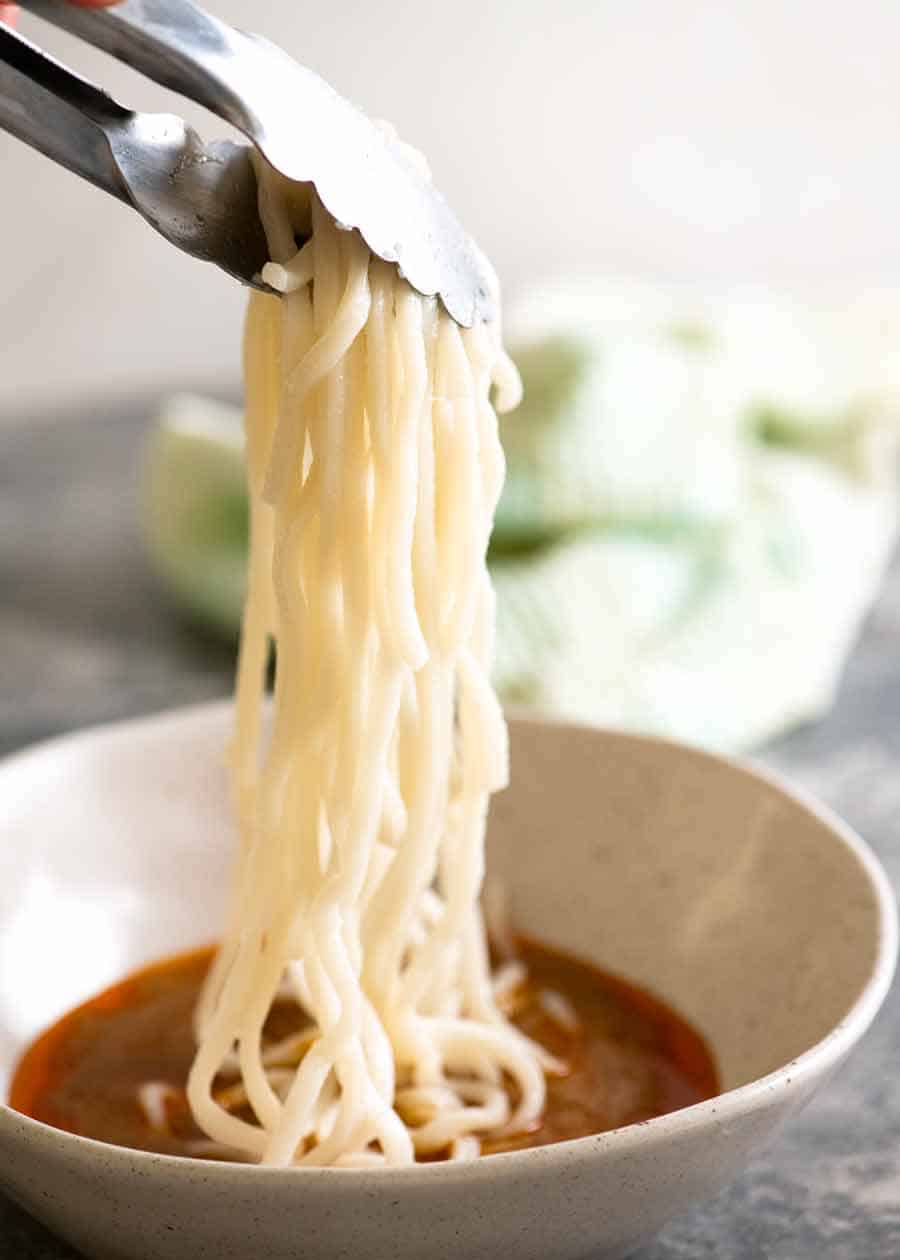 Then layer it all up – sauce in first, noodles next, then all the toppings. 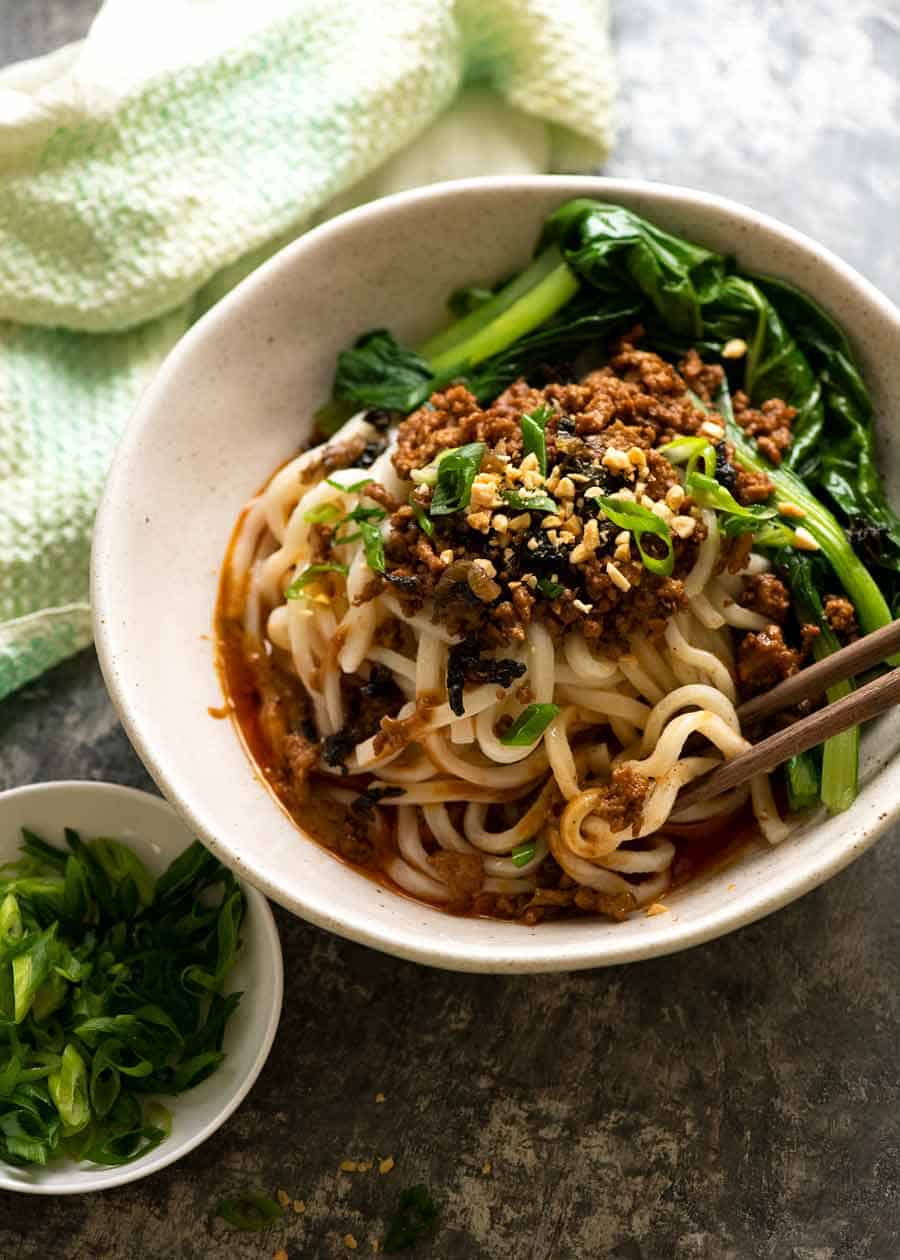 Then mix it all up and devour!!

I know it’s a looooong post, with lots of ingredients visuals and breaking down the components. But don’t fret! Once you’ve gathered all the ingredients, the making part is straight forward.

You also don’t need to rush and worry about cooking all the components so they’re piping hot when you put it together. The sauce and pork and be lukewarm because it gets heated through when you toss the hot noodles through. It’s the Dan Dan way! – Nagi x 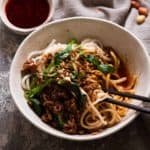 Recipe video above. The iconic spicy Sichuan Dan Dan Noodles, made at home! Am intensely flavoured spicy sesame chilli oil sauce tossed with noodles and pork. Don’t be daunted by the list and steps, there’s no need to rush. Cook and prepare all the parts except the noodles. Cook the noodles just before serving so they’re piping hot because the idea is to toss hot noodles with the pork and sauce so the heat warms everything else up. That’s the Dan Dan way!

2. Chinese Chilli paste in oil – My favourite is Fuyun Xiang La Wang (chilli sauce) which is sold at most Chinese grocers. Use leftovers to add chilli kick to anything Asian, or for dipping sauces for things like Potstickers / Gyoza. Substitute any Asian chilli paste (preferably in oil), a plain chilli paste, sambal oelek, and add an extra glug of chilli oil.

3. Light soy sauce – bottle will be labelled as such. Can sub with all purpose soy sauce, do not sub with dark soy sauce (too strong flavour).

5. Sichuan Pepper – spiciness is numbing rather than the usual fiery heat of chilli, and a slight lemony flavour, common in Sichuan foods (eg Kung Pao Chicken). Available at Asian stores and some grocery stores with speciality spices (eg 🇦🇺Harris Farms), it’s best to lightly toast in dry skillet then freshly grind your own if you can but for convenience, just use pre ground (I do this mostly). Substitute with white pepper.

6. Chilli Oil – Bright red in colour, and as spicy as it looks! You’ll find Chinese chilli oil in any Asian grocery store, otherwise, any chilli oil will do just fine. Restaurants use a LOT more oil than I do so feel free to up the quantity! Substitute 1 part sriracha to 2 parts oil.

7. Sui Mi Ya Cai (preserved mustard greens) – find in Asian stores (is cheap ~$1.30), best sub is finely chopped kimchi. Don’t fret if you can’t find this, recipe only uses a sprinkle. It’s Chinese pickled mustard greens (a type of green vegetable) from Sichuan. Texture and saltiness is like kimchi.

8. Dark soy sauce – stains sauces a darker colour and has more intense soy flavour. Bottle will be labelled as such if it’s Dark Soy Sauce. Sub 2 tsp normal or light soy sauce – pork will not be as brown.

9. Noodles – best to use fresh noodles (fridge section), white medium thickness ie 3mm / 1/8″ thick. If using dried, use 300g/10oz white noodles made with wheat and prepare per packet. White noodles is traditional (looks terrific against red sauce), but otherwise use any noodles you can (500g/1lb fresh or 300g/10oz dried).

11. This recipe first appeared on www.goodfood.com.au where I contribute recipes monthly. Reprinted on my own website with permission!

Recipes used in coming up with this recipe include: China Sichuan Food and as always, the wonderful family at The Woks of Life to whom I credit much of my learnings of truly authentic Chinese food. I am a devoted fan girl.

He spent the entire time snuffling around frantically. Some people said it’s because of all the exciting smells – fertiliser manure and the like.

I think he was looking for food – because I know how he thinks. He truly believes that people eat their lunch while browsing nurseries and accidentally drop half their sandwich and leave it for lucky dogs to discover. 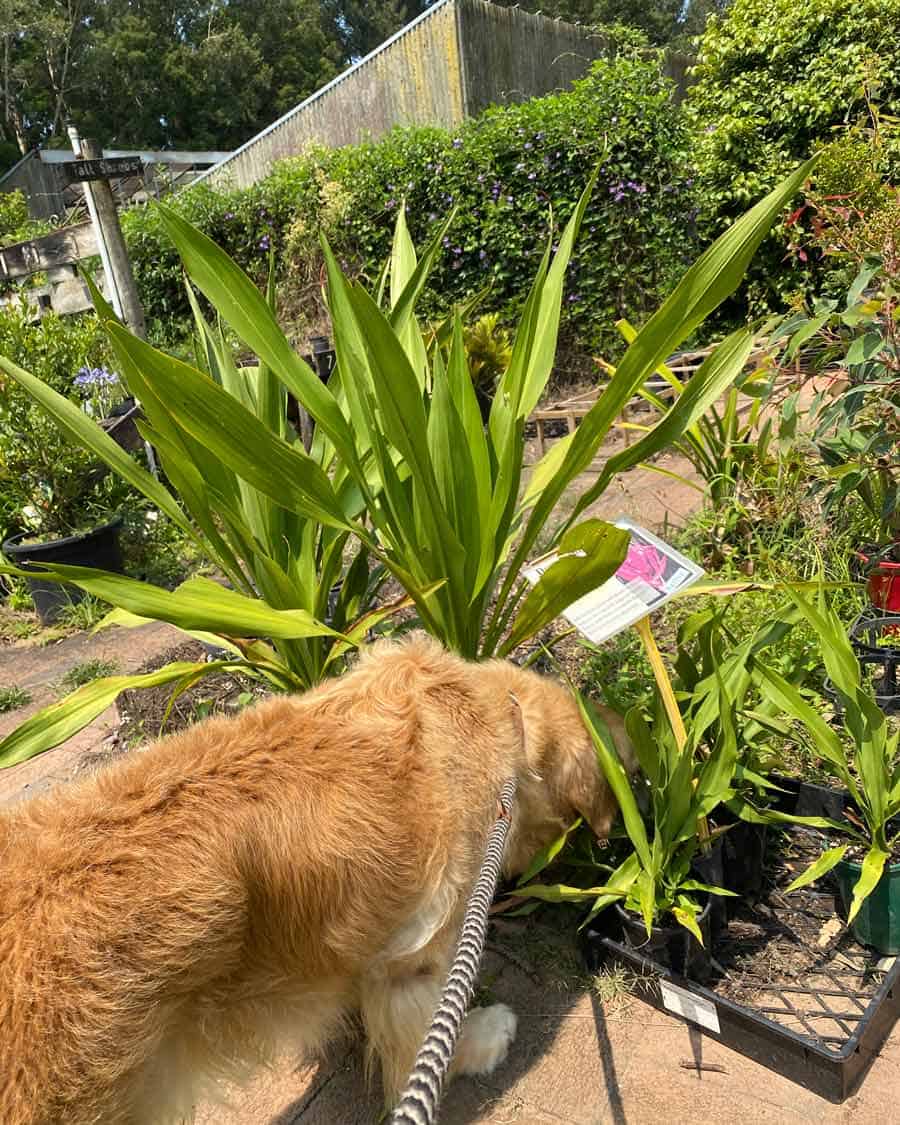