This Indian Style Creamed Spinach is a bit like Palak Paneer, but without the paneer. …because my homemade paneer didn’t turn out. 😅 But that’s okay! The creamy spiced spinach is absolutely delightful on its own, so it’s still totally worth sharing. It’s amazing for dipping bread (preferably naan), spooning over rice, or using as a base for a more complete meal. 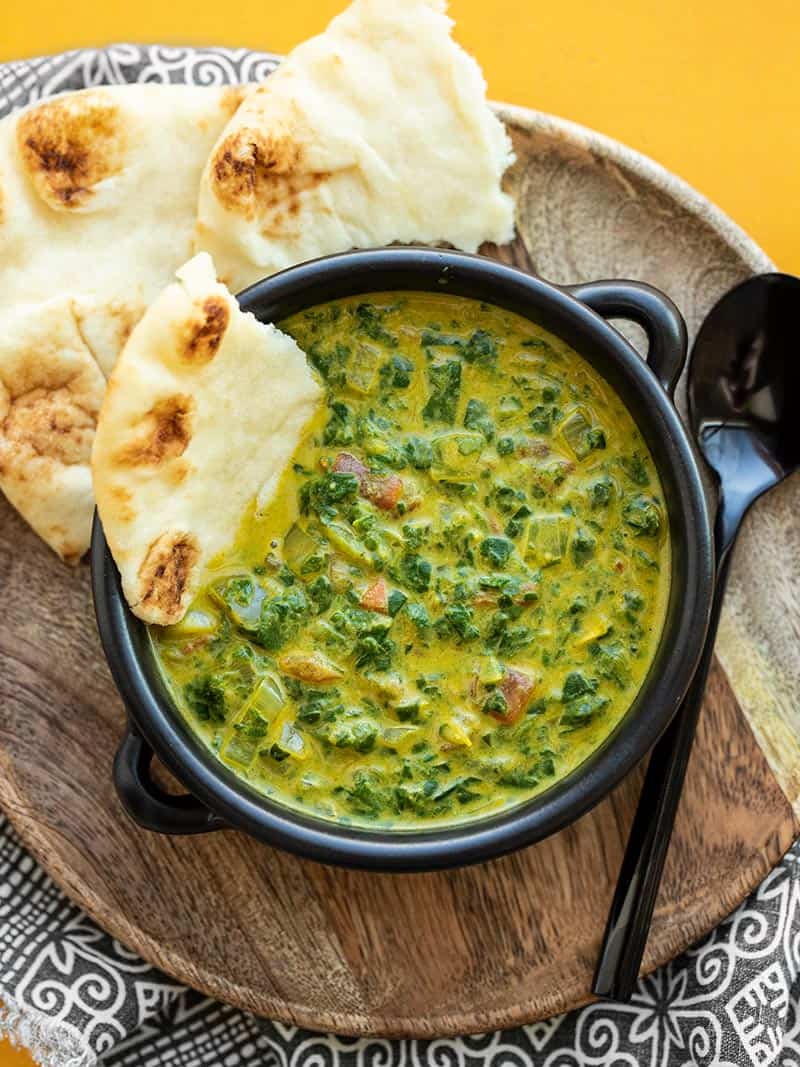 Make it Dairy-free or with Dairy

When I originally posted this recipe seven years ago I made it with evaporated milk. Since that time I’ve discovered how incredibly amazing coconut is with garam masala, so this time around I swapped out the evaporated milk for coconut milk. That also happens to make this recipe vegan and friendly to those who can’t consume dairy. If you prefer the dairy version, simply use one cup evaporated milk in place of the coconut milk.

Can I Use Light Coconut Milk?

Yes, you can use light coconut milk in place of the full-fat coconut milk, but the end result will be slightly less thick. I do not suggest using coconut milk sold in a carton, the type meant to be used as a dairy milk substitute. It will be far too watery for this recipe.

What to Serve with Indian Creamed Spinach

As mentioned in the intro, this Indian style creamed spinach makes a great side dish. You can serve it with dishes like Slow Cooker Chicken Tikka Masala, Cauliflower and Chickpea Masala, or Slow Cooker Coconut Curry Lentils. Or, you can add a couple more ingredients into your creamed spinach and make that your main dish. Consider adding cubed tofu, a can of chickpeas, or a diced potato or two. 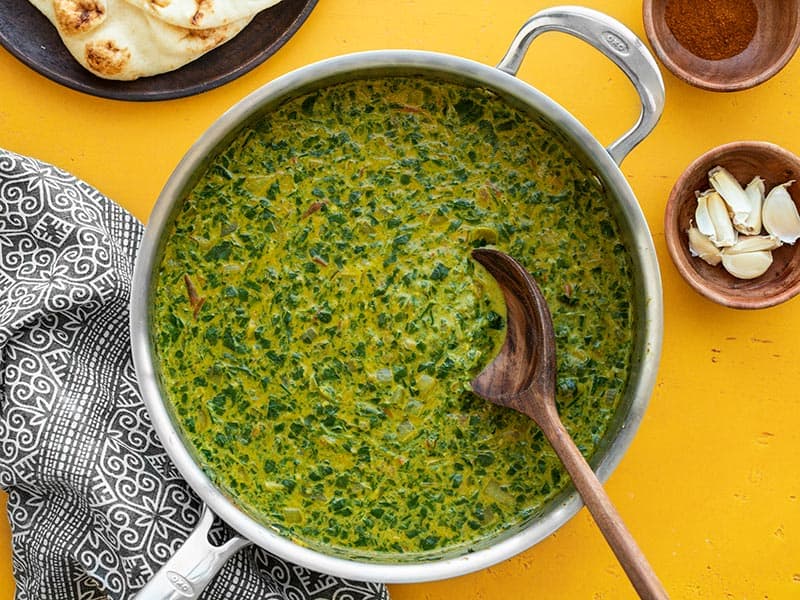 Is this Creamed Spinach Spicy?

Is there a Substitute for the Garam Masala?

If you can’t find Garam Masala in a store near you, you can substitute it with curry powder. Or, try your hand at making a homemade garam masala.

Rich and fragrant, this Indian Creamed Spinach makes a delicious side dish or, with a few additions, a simple vegetarian meal. 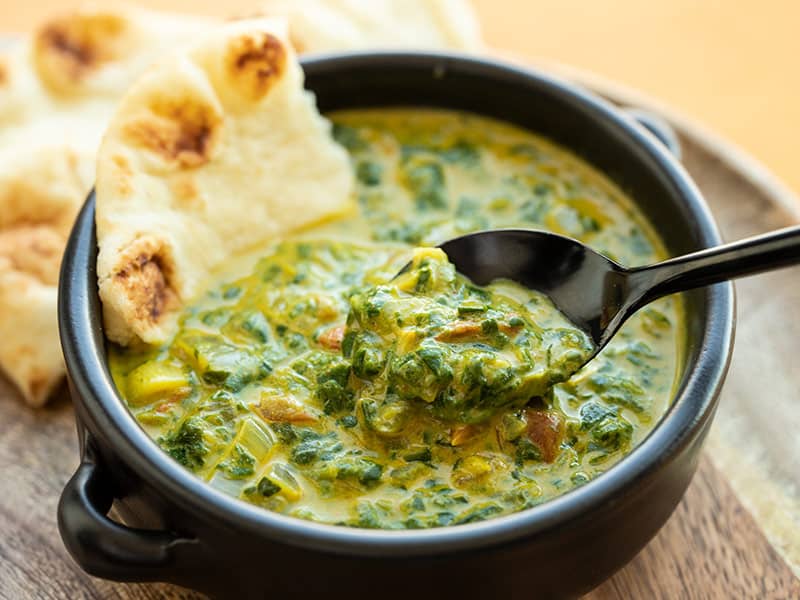 How to Make Indian Creamed Spinach – Step By Step Photos 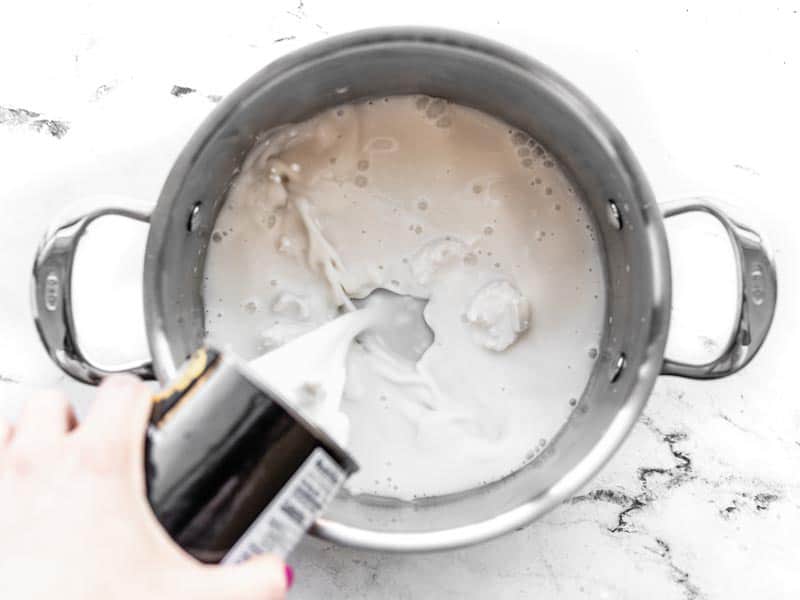 Start by pouring one 13.5 oz. can of full-fat coconut milk into a soup pot. 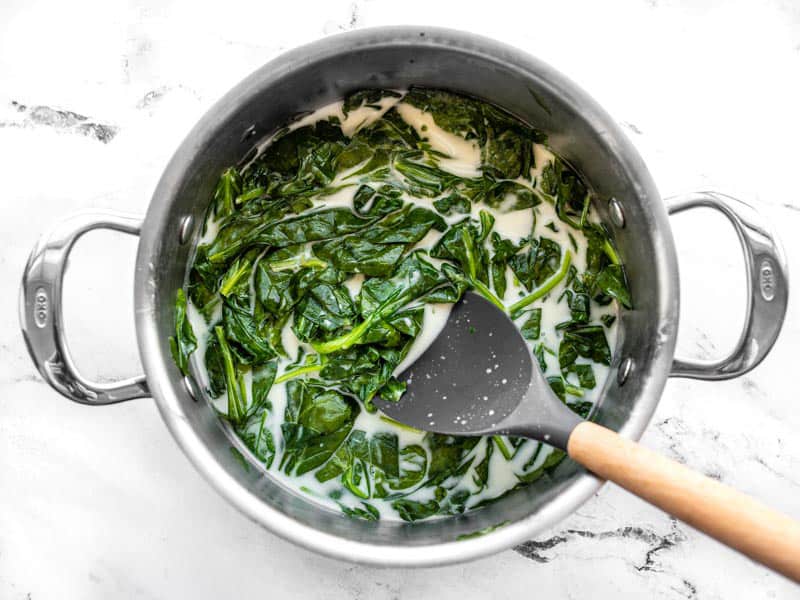 Add 8 oz. of fresh spinach to the coconut milk. Stir and cook over medium heat just until the spinach has wilted (this should only take about five minutes). Do not over cook the spinach here. It should still be bright green in color. 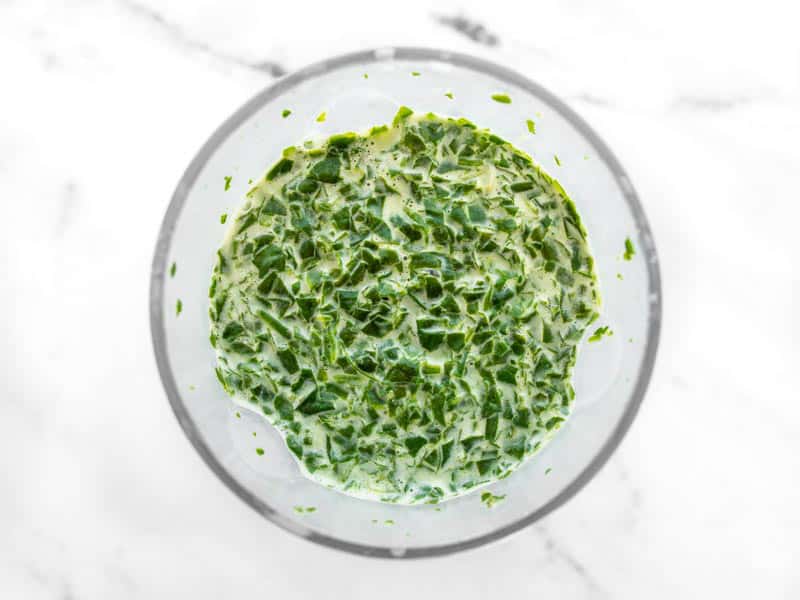 Transfer the warm coconut milk and spinach to a blender and pulse until the spinach is in small pieces. You can blend until smooth if you prefer, but I like a little texture in mine. Set this mixture aside. 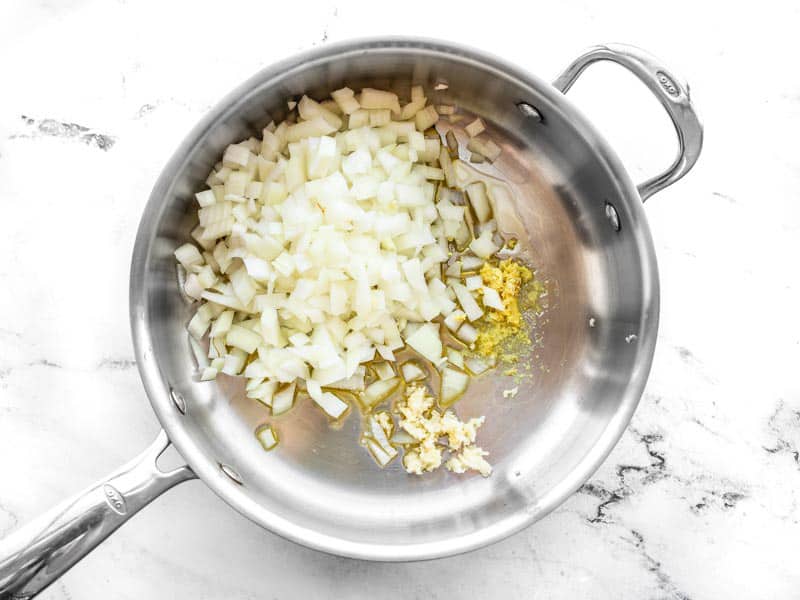 Dice one yellow onion, mince two cloves of garlic, and grate about 1 Tbsp fresh ginger. Add all three to a skillet along with 2 Tbsp olive oil. Sauté the onion, garlic, and ginger over medium heat until the onions are soft (about 5 minutes). 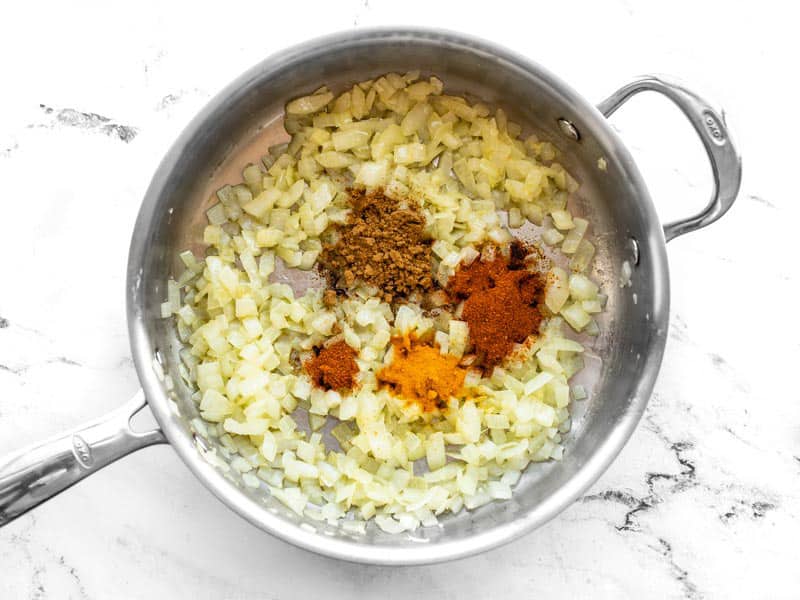 Once the onions are soft, add 2 tsp cumin, 1 tsp garam masala, ½ tsp turmeric, and ¼ tsp cayenne pepper to the skillet. Stir and cook the spices with the onion, garlic, and ginger for about 2 minutes more. 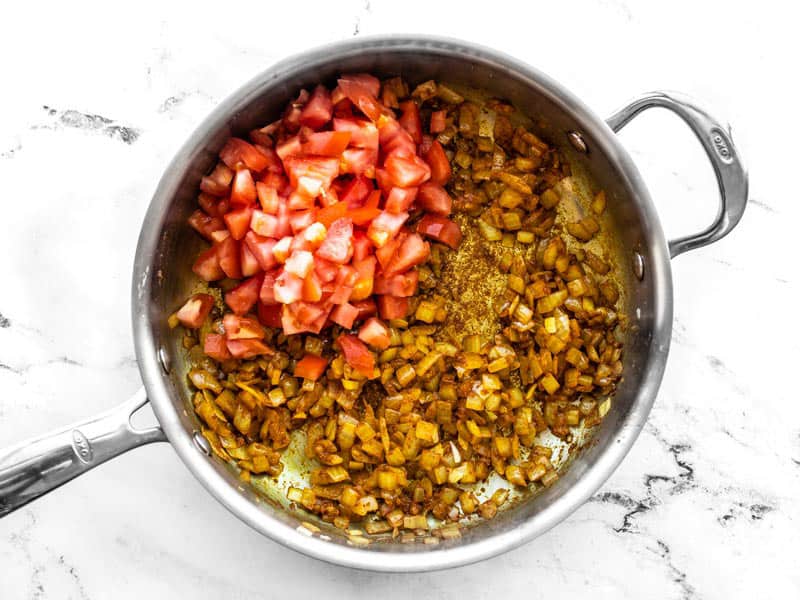 Dice one tomato and add it to the skillet along with about ¼ cup water. Stir and cook the tomato with the other ingredients, dissolving any browned bits off the bottom of the skillet, until the tomatoes have broken down (5-8 minutes). 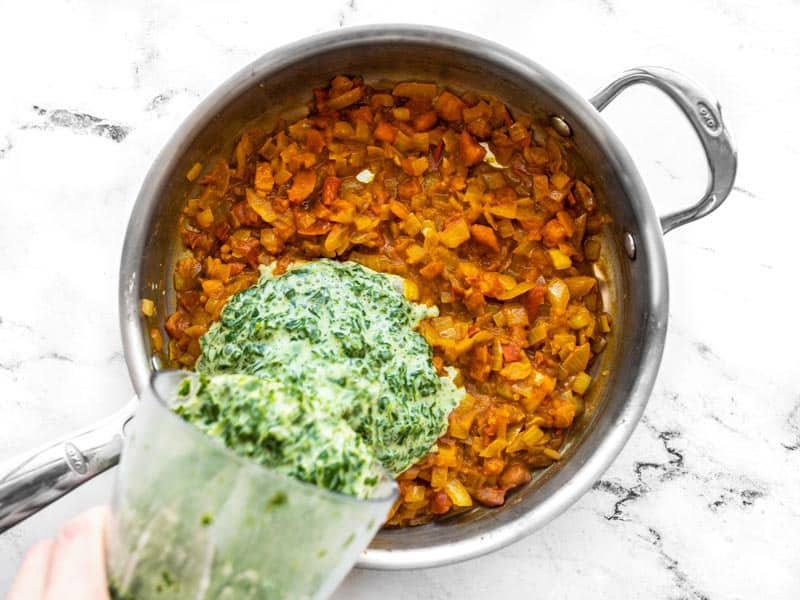 Finally, pour the coconut and spinach mixture into the skillet and stir to combine. 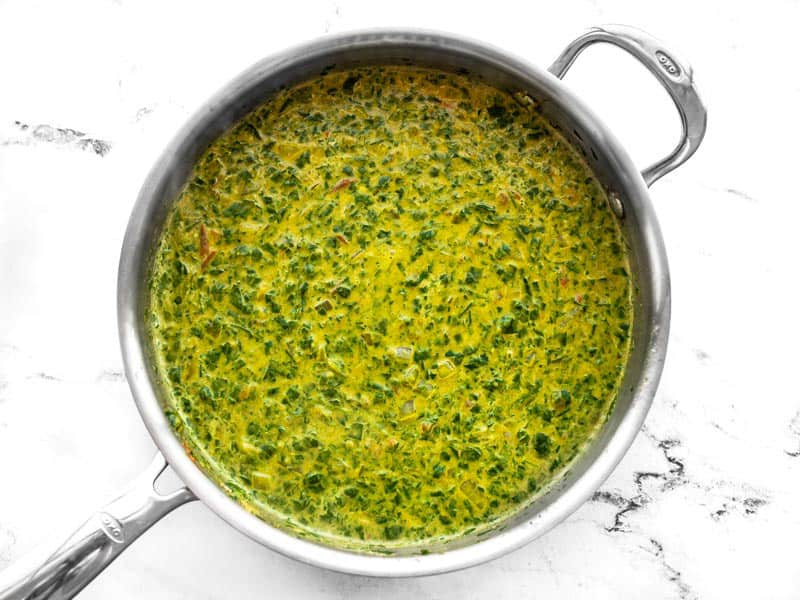 Allow the mixture to heat through, stirring occasionally. Once hot, give it a taste and add salt as needed. I added about ¾ tsp. I suggest starting with ¼ tsp and adding more to your liking. Adding the correct amount of salt will help the flavors pop. 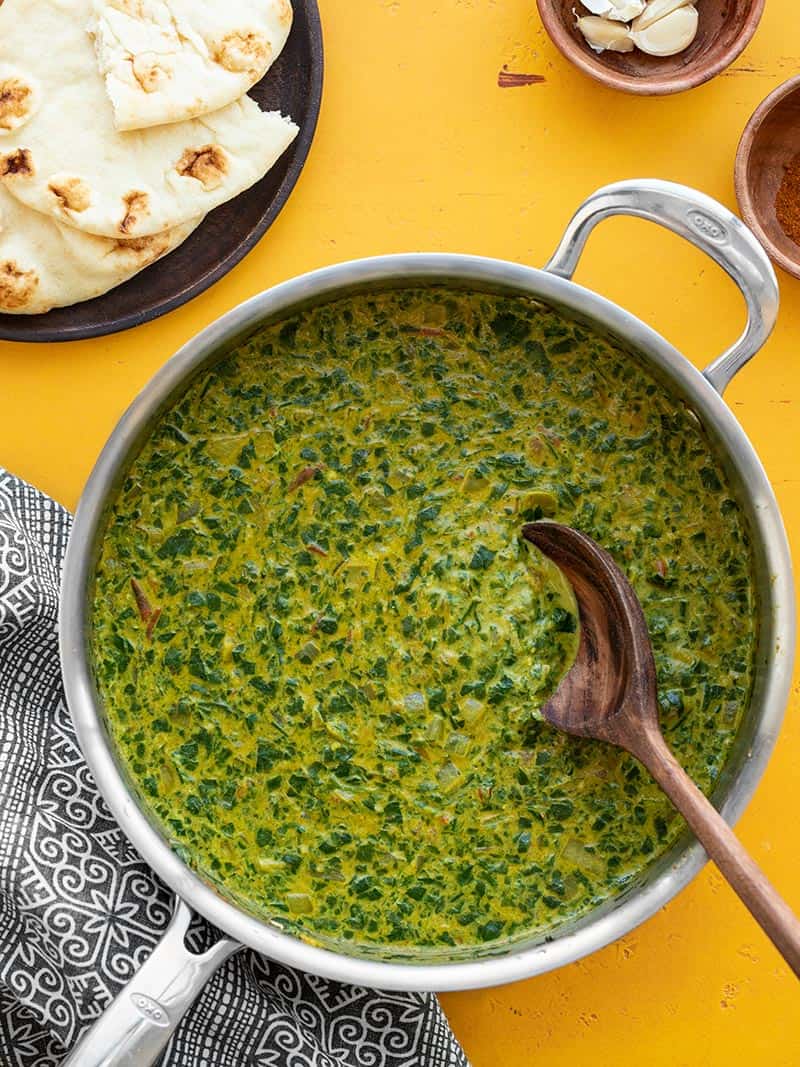 Serve hot with some bread for dipping!