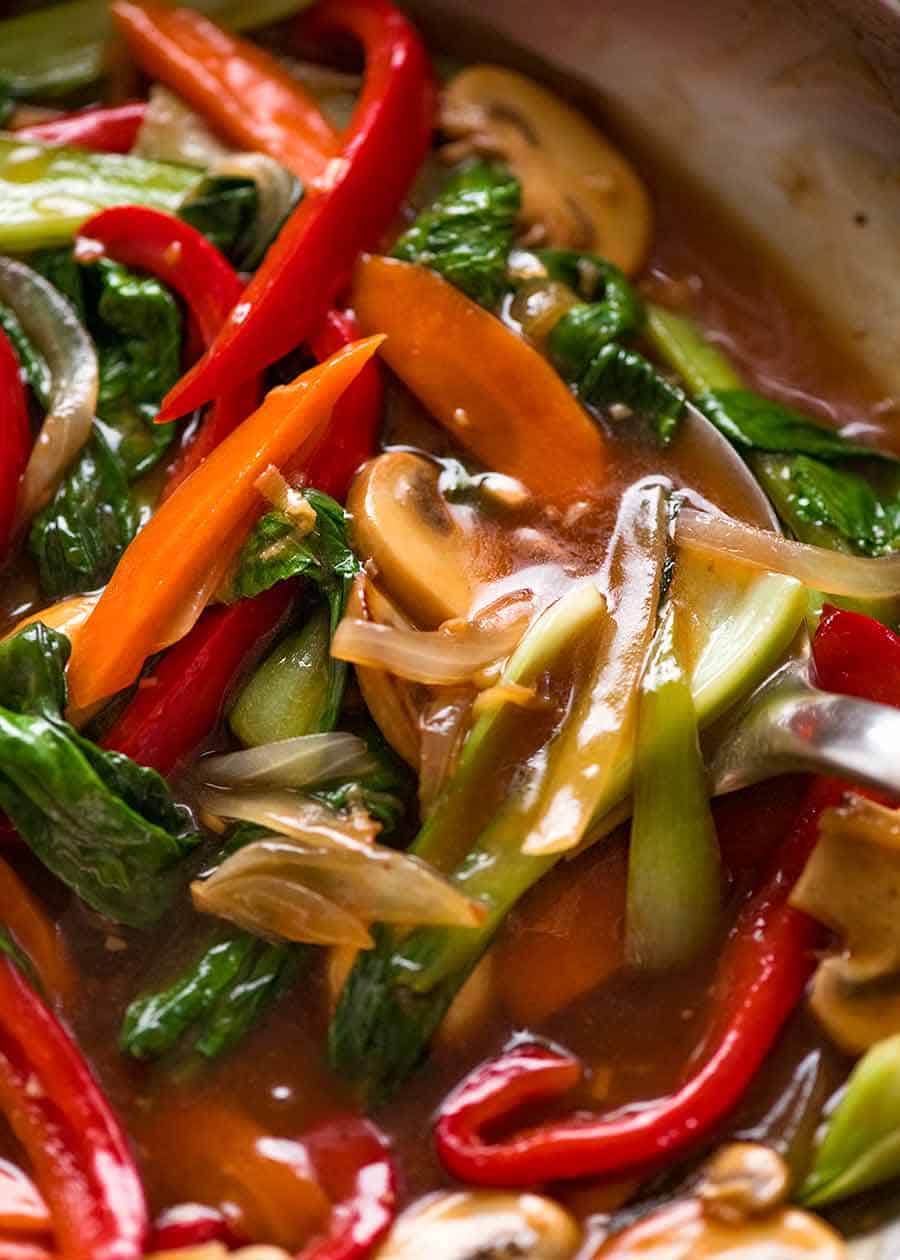 This is a Vegetable Stir Fry to make your own. Use it for any veggies you want, and serve it as a main or as a side dish with any Asian food. The tasty Chinese brown sauce is just like you get from Chinese restaurants and will make any veg totally scoff-able. And there’s a generous amount of it to soak your rice!

I make this approximately once a week, and it completely baffles me how I’ve been running this recipe website for 5 years (!!) without sharing it.

A Vegetable Stir Fry is:

I serve it over rice or noodles. I toss noodles into it while cooking. I top homemade Chinese noodle soups with it. And I make instant ramen respectable by piling on this saucy stir fried vegetables. 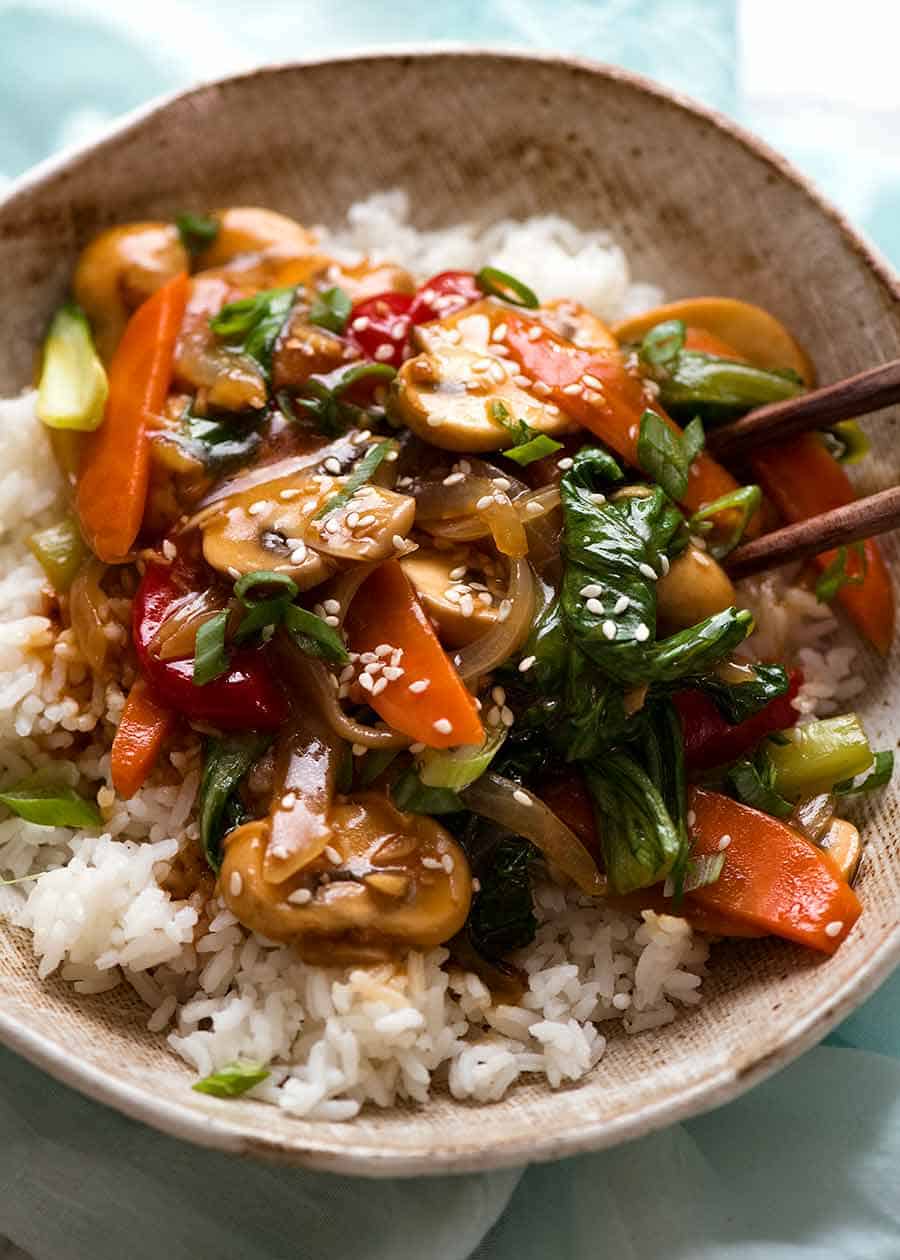 What goes in my Vegetable Stir Fry

You can basically ignore all the vegetables in the photo below, and visualise whatever YOU want  to use! Just use the sauce part of my recipe. 🙂 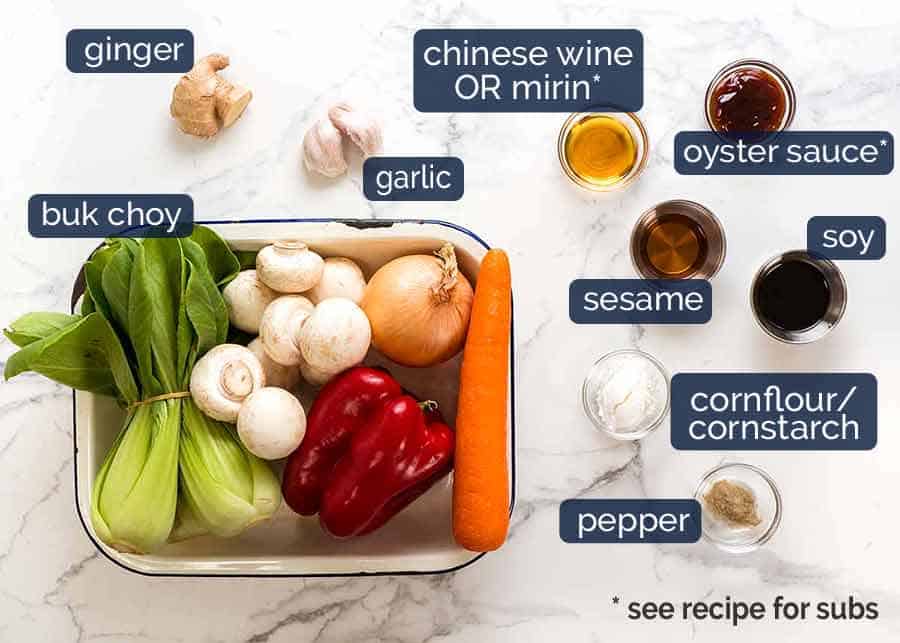 Can I make this with Charlie?

100% yes, you’ll need 4 tablespoons of Charlie and directions are in the recipe below. For new readers, “Charlie” is my ready made All Purpose Chinese Stir Fry Sauce. RTE readers and I love him so much, we’ve named him. He has a shelf life of months, and can be used in 90% of my stir fries and noodles, either outright or with the addition of a few extra flavourings. Try him once, and you’ll be obsessed with him too!

How to make stir fried vegetables 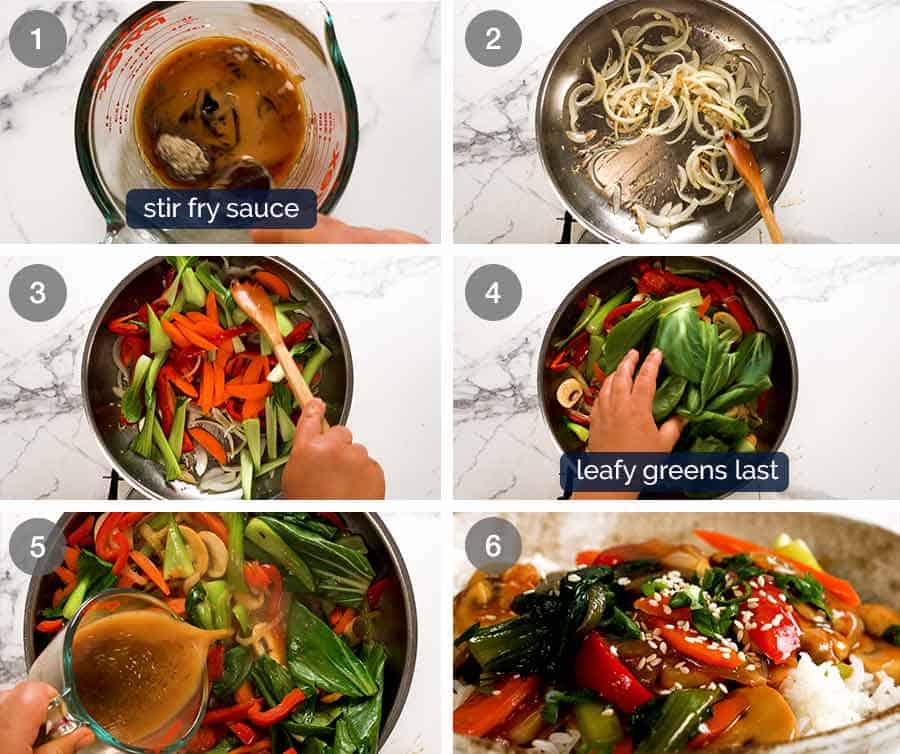 What order to cook vegetables in stir fries

There’s no need to turn this into an exact science! Just start by cooking aromatics to form the flavour base then add vegetables that take the longest to cook first, and delicate things like leafy greens towards the end.

Pre cooked vegetables – broccoli, cauliflower and broccolini should be pre-cooked prior to using in a stir fry as they take too long to cook from raw in a stir fry (unless chopped small). And though I rarely use them in stir fries, I also pre cook things like pumpkin, potato, squash, and other root vegetables. 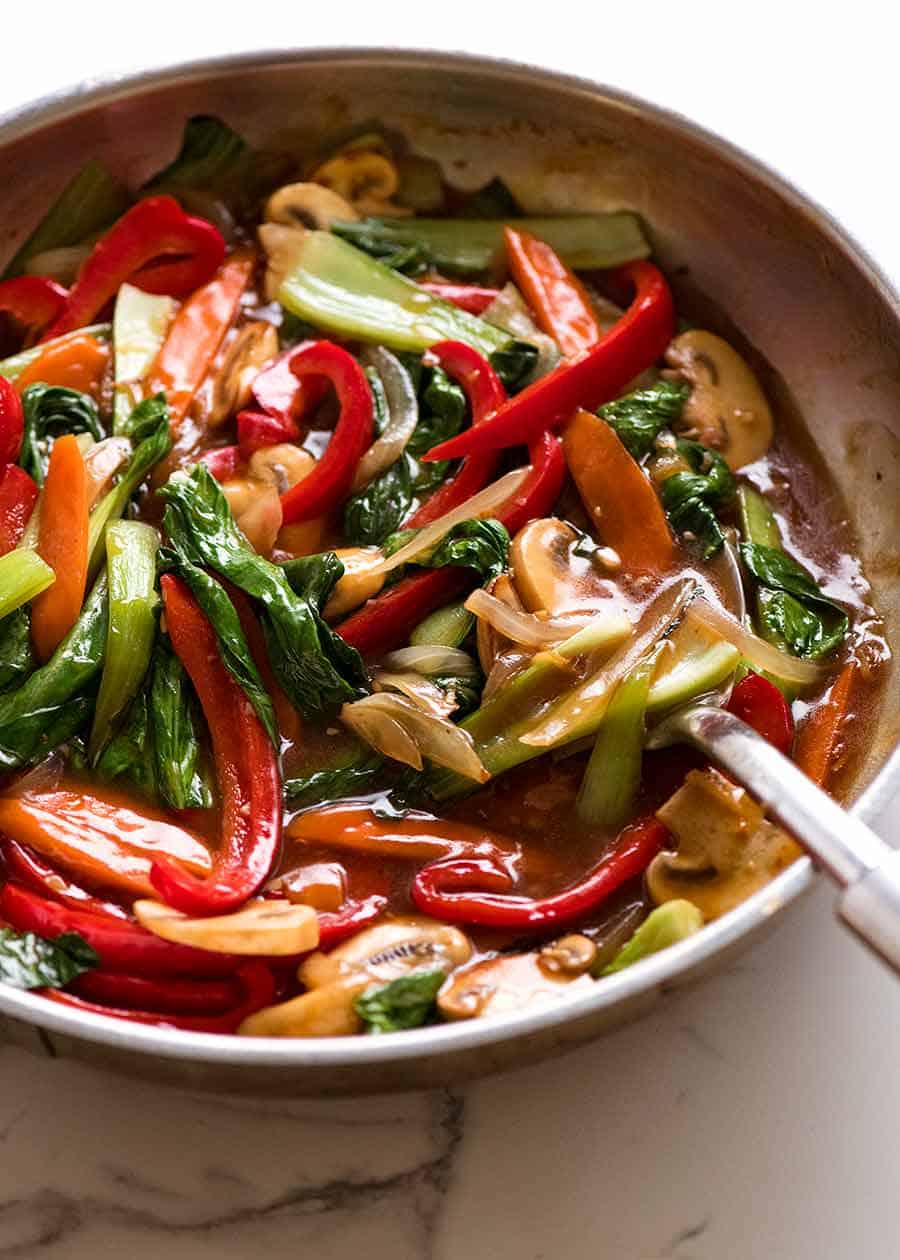 A big skillet of vegetables never looked so tasty!!

Also – the stir fry sauce. I like making plenty of it so it can soak through the rice or noodles, or whatever you serve it over. It’s also particularly good at disguising cauliflower rice – for those of you *trying* to cut down on carbs. 😇

What to serve with Stir Fried Vegetables

This can be served as:

Though this stir fry has Chinese origins, don’t restrict yourself to serving this alongside just Chinese dishes. You’ll see similar version of this sauce used all across Asia. So serve it as a vegetable side the next time you make any Asian dishes – such as Vietnamese, Thai or Japanese! Here are a few suggestions (just a few….😂):

What to serve with Stir Fried Vegetables 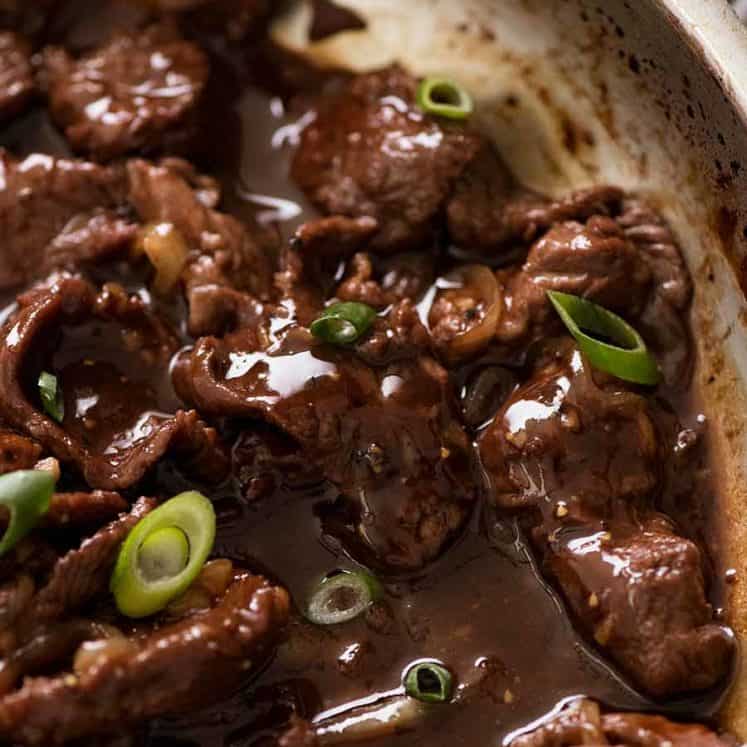 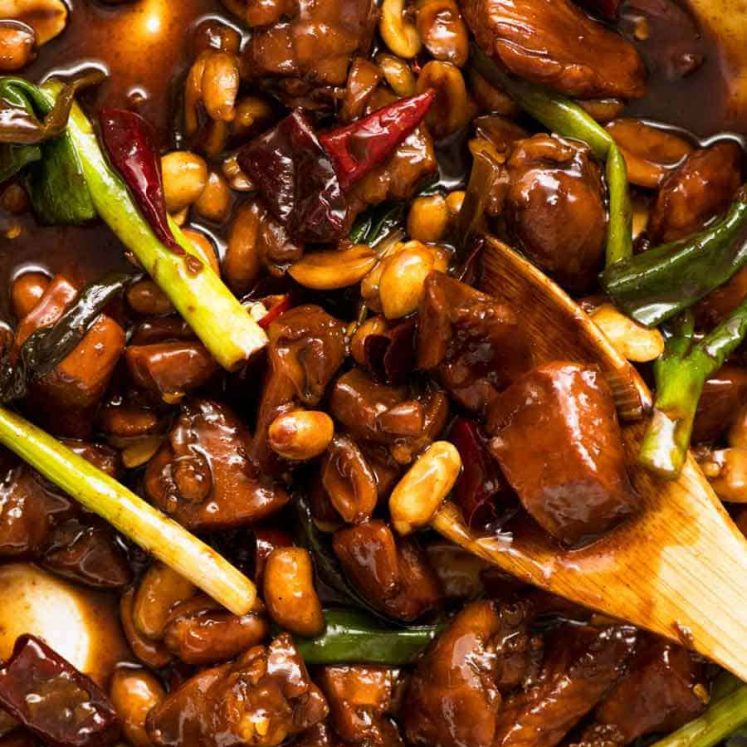 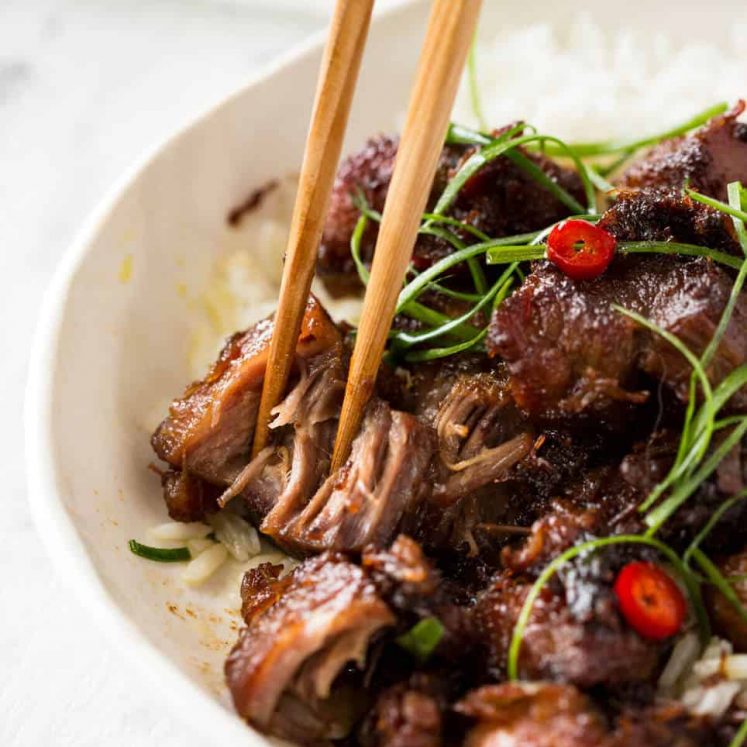 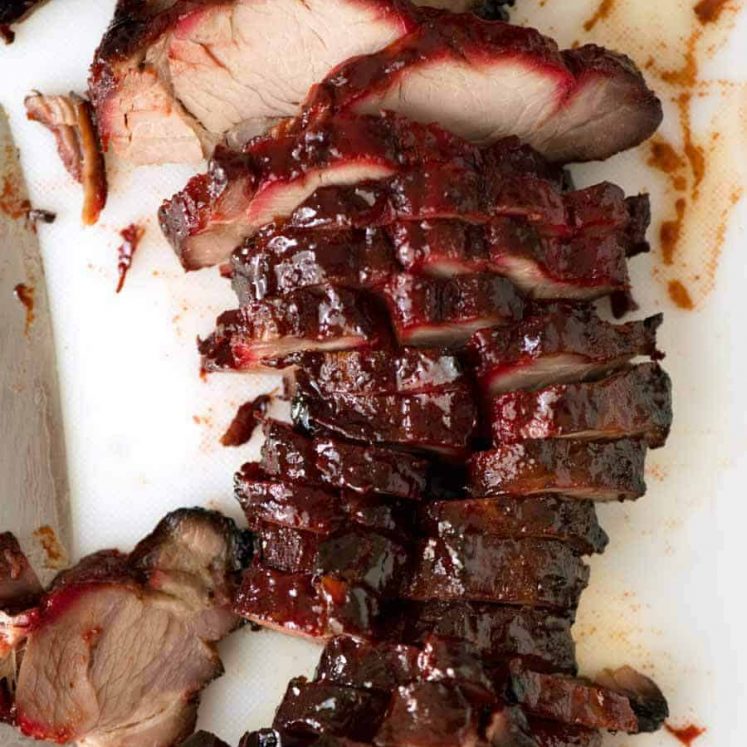 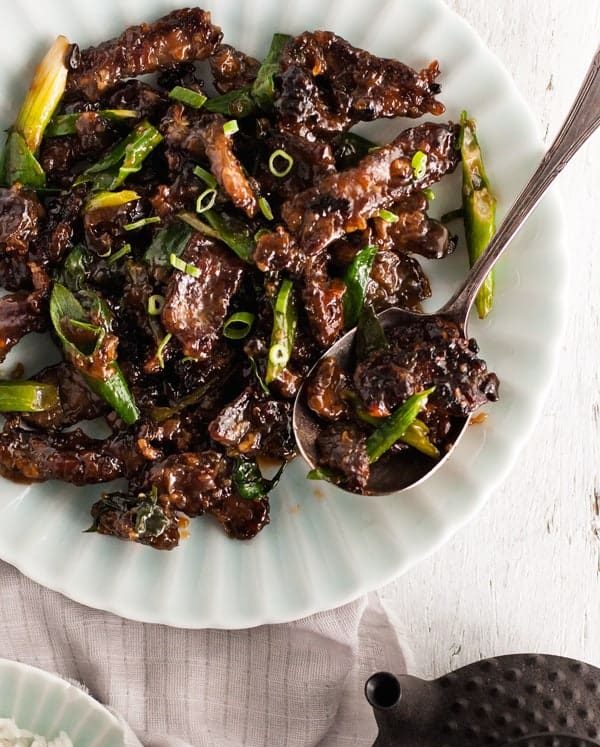 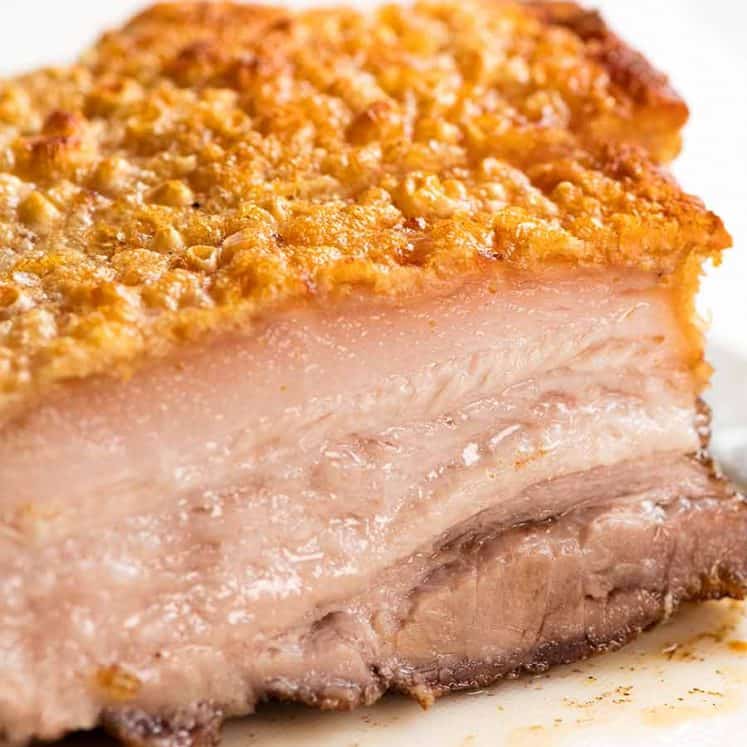 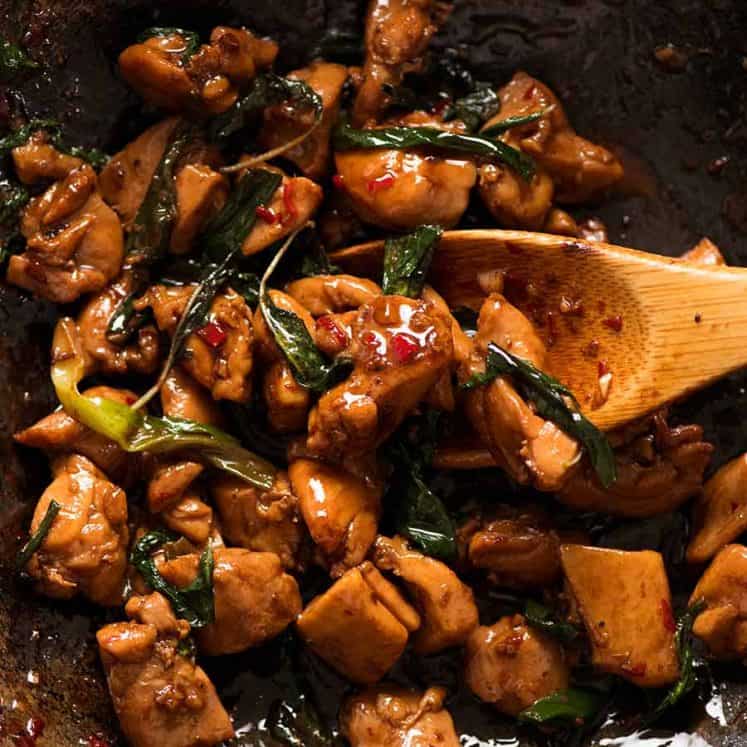 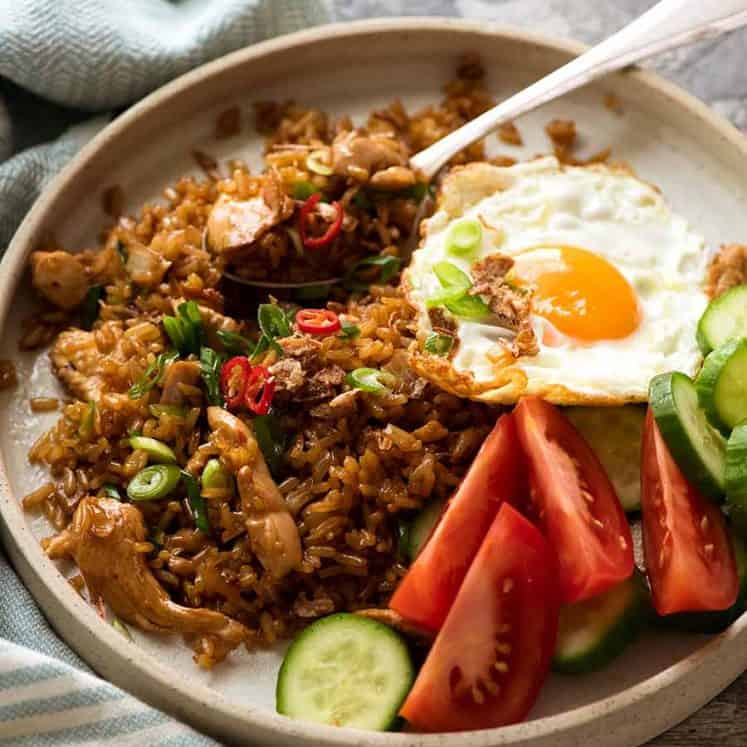 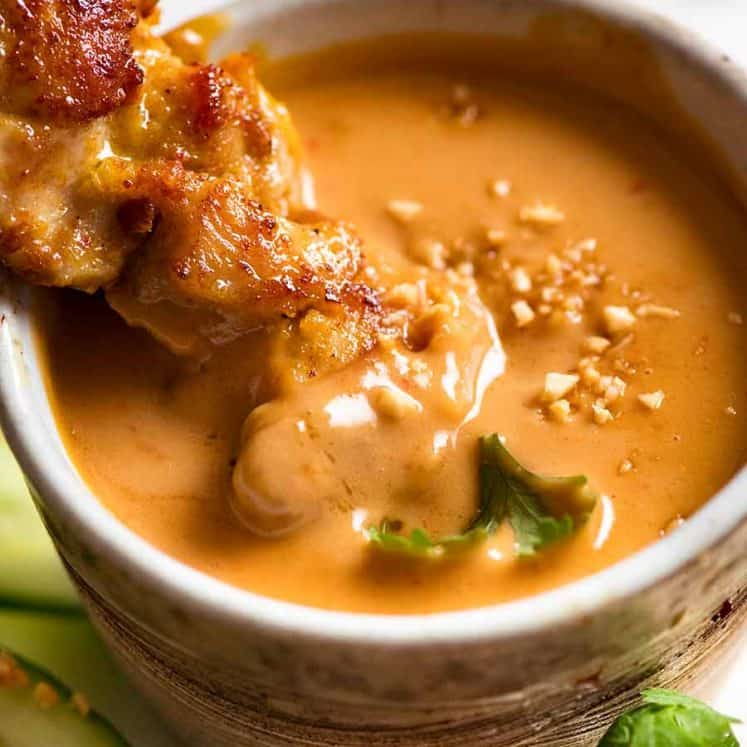 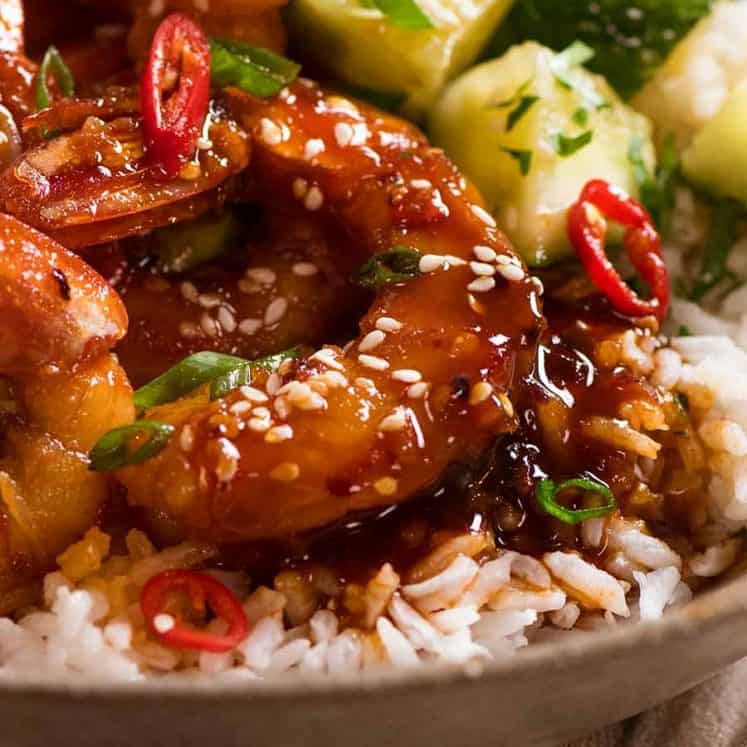 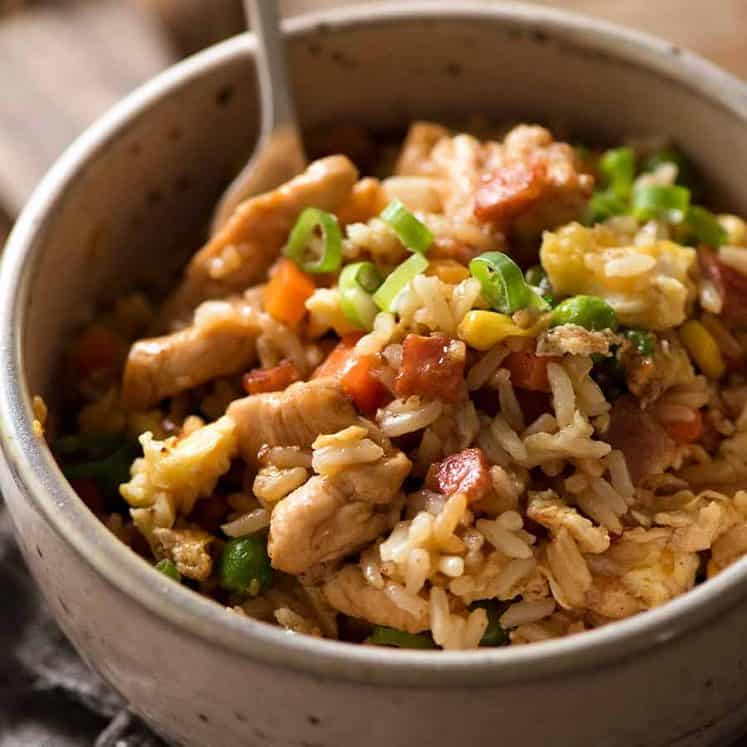 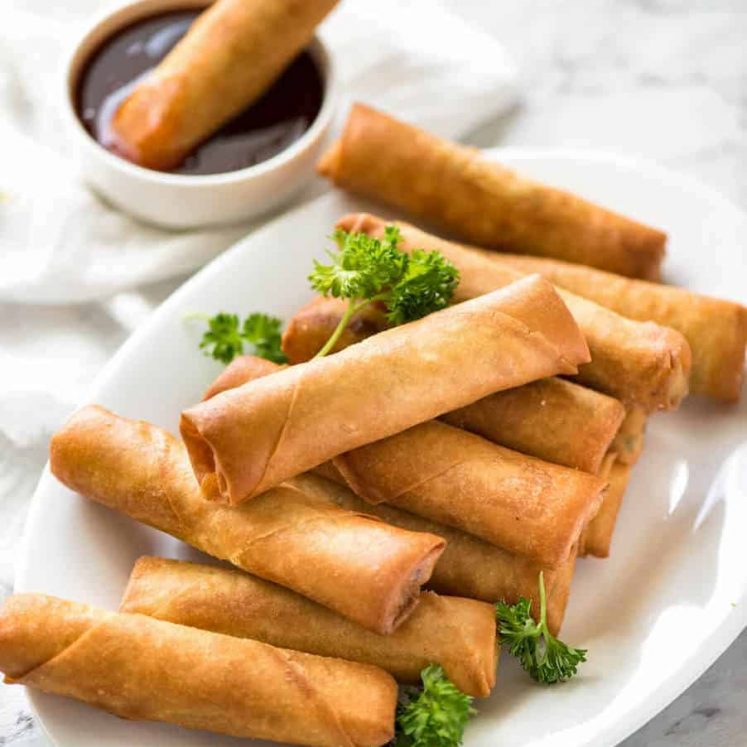 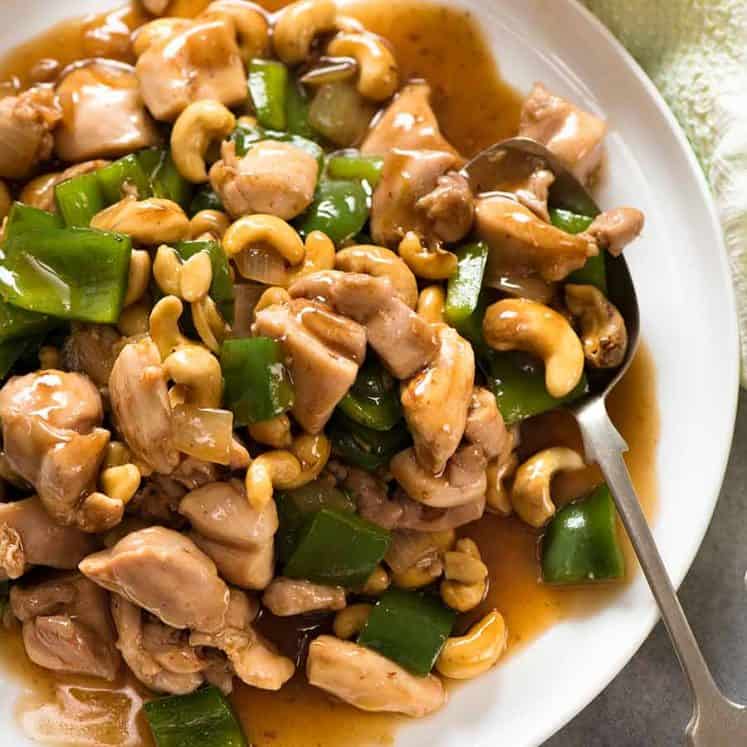 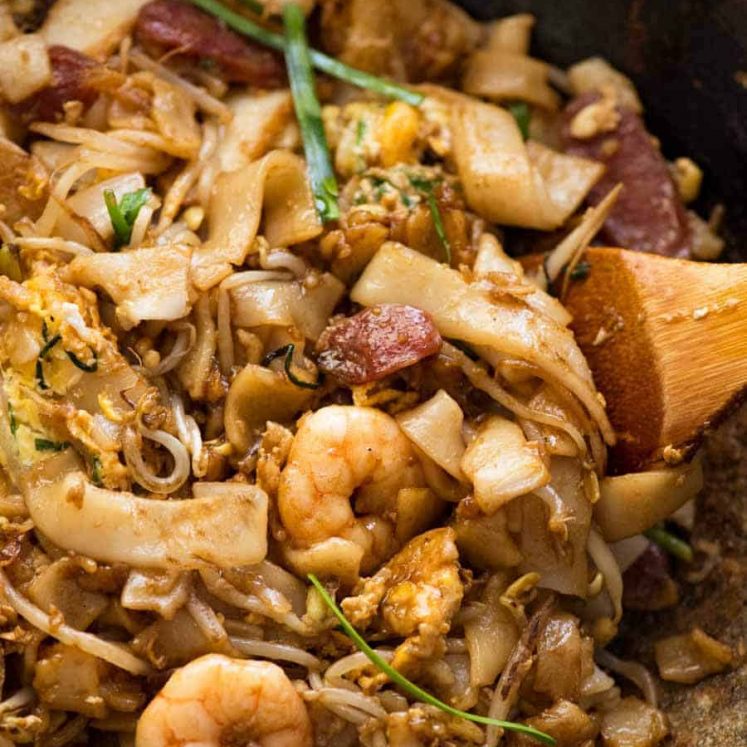 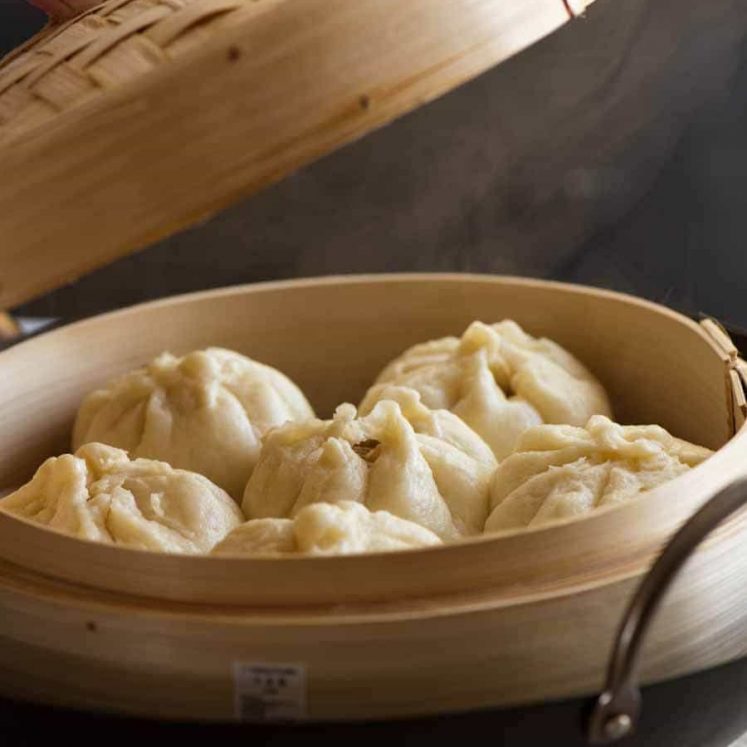 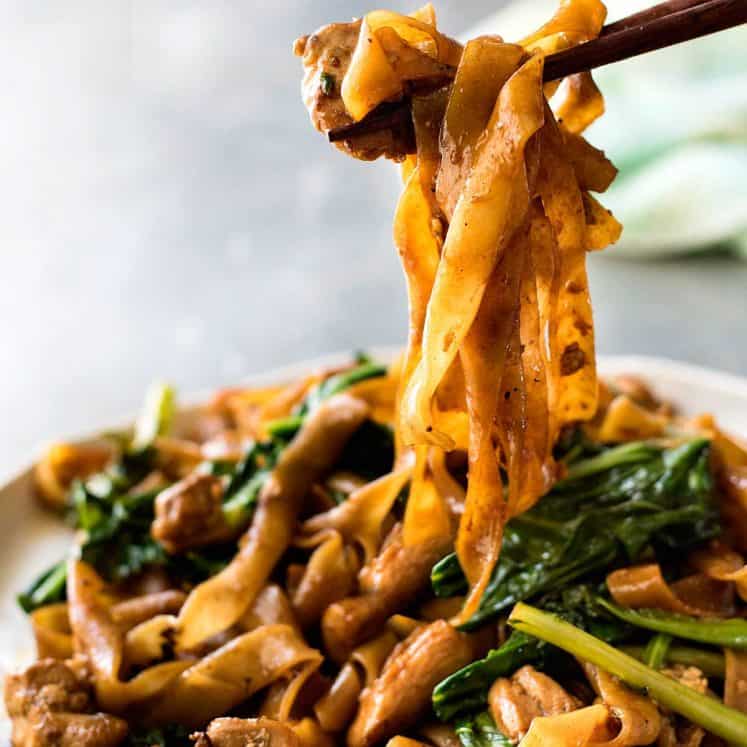 Woah. For someone who’s taken so long to share such a *simple* recipe, I sure did have a lot to say about it! 😂 – Nagi x 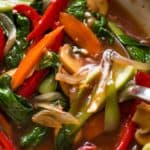 Recipe video above. Any vegetables are totally scoffable when they’re smothered in a tasty Chinese gravy! Use any veg you want – just add them according to the cook time (hard veg in first, leafy veg in last). For a quick hit of protein, toss in some cubes of firm tofu. For a chicken version, use this Chicken Stir Fry. Recipe works with Charlie – see Note 4.

1. Buk Choy is an Asian vegetable, as pictured. Stems take longer to cook than the leaves, so best to cut leaves off and add towards the end of the cook time. Stems vary vastly in width (outer layers thick, inner layers small) so cut them into even size so they cook at the same time. Do the same for all similar shaped Asian Greens.

There’s no need to be 100% exact here – if some leaves end up in the stem batch, it’s totally fine! You just want MOST added later in the cook time.

2. Soy sauce – use light or all purpose soy sauce here. Do not use Dark Soy Sauce – the flavour is too intense and will overpower the sauce. The bottle will be labelled “dark soy sauce”.

3. Chinese Cooking Wine (“Shaoxing wine”) is the secret ingredient that really makes a restaurant standard Chinese sauce. You get complexity and depth in the sauce with just a bit of the cooking wine.

4. CHARLIE is my All Purpose Stir Fry Sauce. If you haven’t met him yet and you love stir fries, you are going to be best friends very soon. Find the recipe for him here, along with how to use him.

To use Charlie for this recipe, replace the Sauce with 4 tablespoons of Charlie + 3/4 tsp cornflour / cornstarch + 3/4 cup water, then use per recipe.

More Dozer pool action! Well, not so much action here, just Dozer climbing out of the pool. Currently using a ramp because the step in is so high, he actually sprained his lower back with all his crazy leaping in and out. 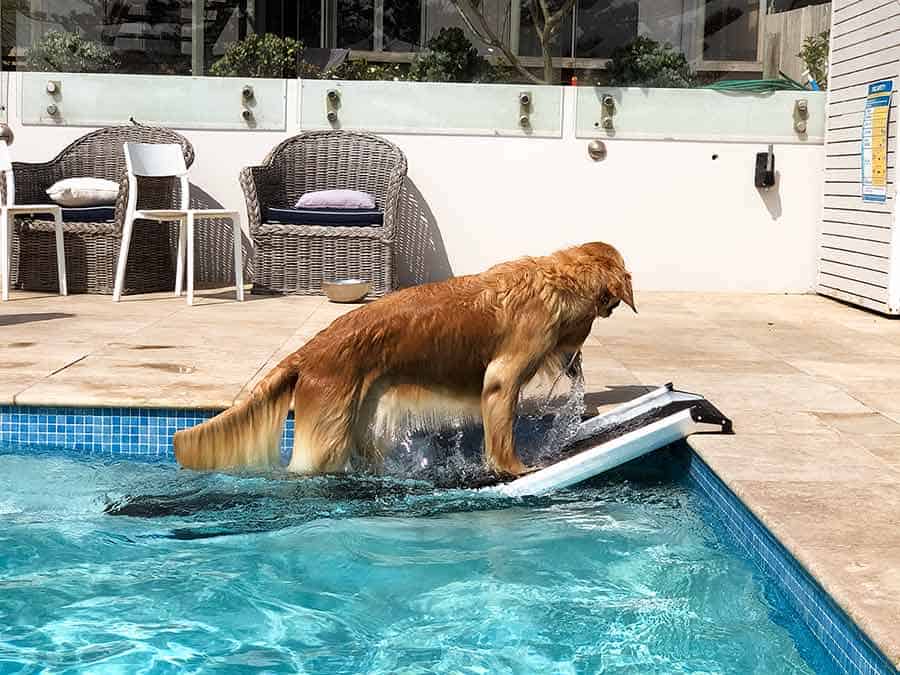