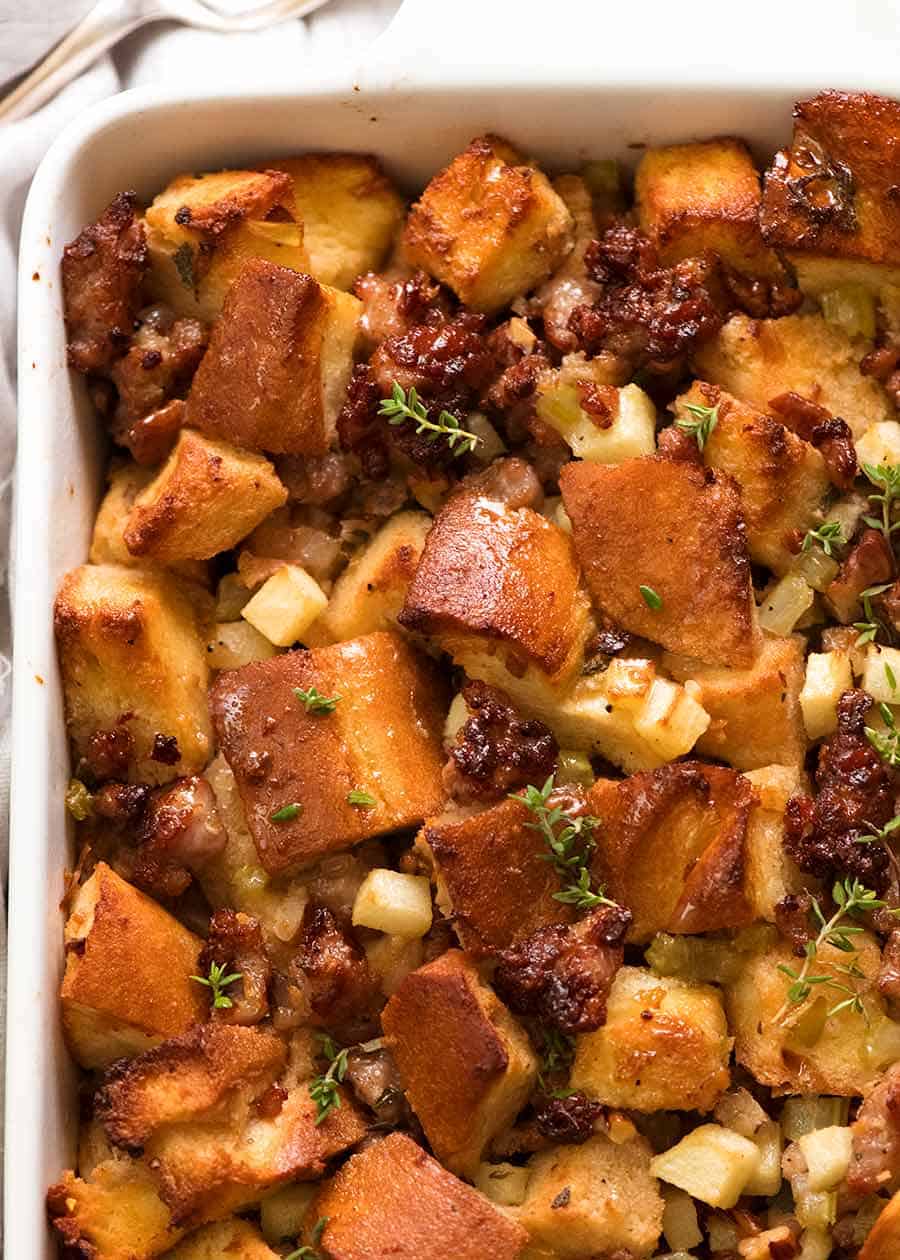 Gone are the days of pale, pasty stuffings inside overcooked turkeys and chickens. Say hello to the Stuffing recipe of your dreams!

Soft, custardy bread on the inside, crunchy golden on top, this sausage stuffing is loaded with pork sausage, apple, pecans, celery and the perfume of fresh herbs. An incredible combo of flavour and textures!

5 years ago, I made this sausage stuffing recipe by Kathleen, the talented cook behind Hapa Nom, and declared it to be the best I’d ever had in my life.

And today, it is still the best stuffing I’ve had in my life. So I decided it’s high time to share it here!

Yes, I’ve tinkered with it slightly over the years. (I tinker with everything, I can’t help it). But it still remains very true to its original roots. I even shared mini Pancetta Stuffing Cups years ago using the same recipe. 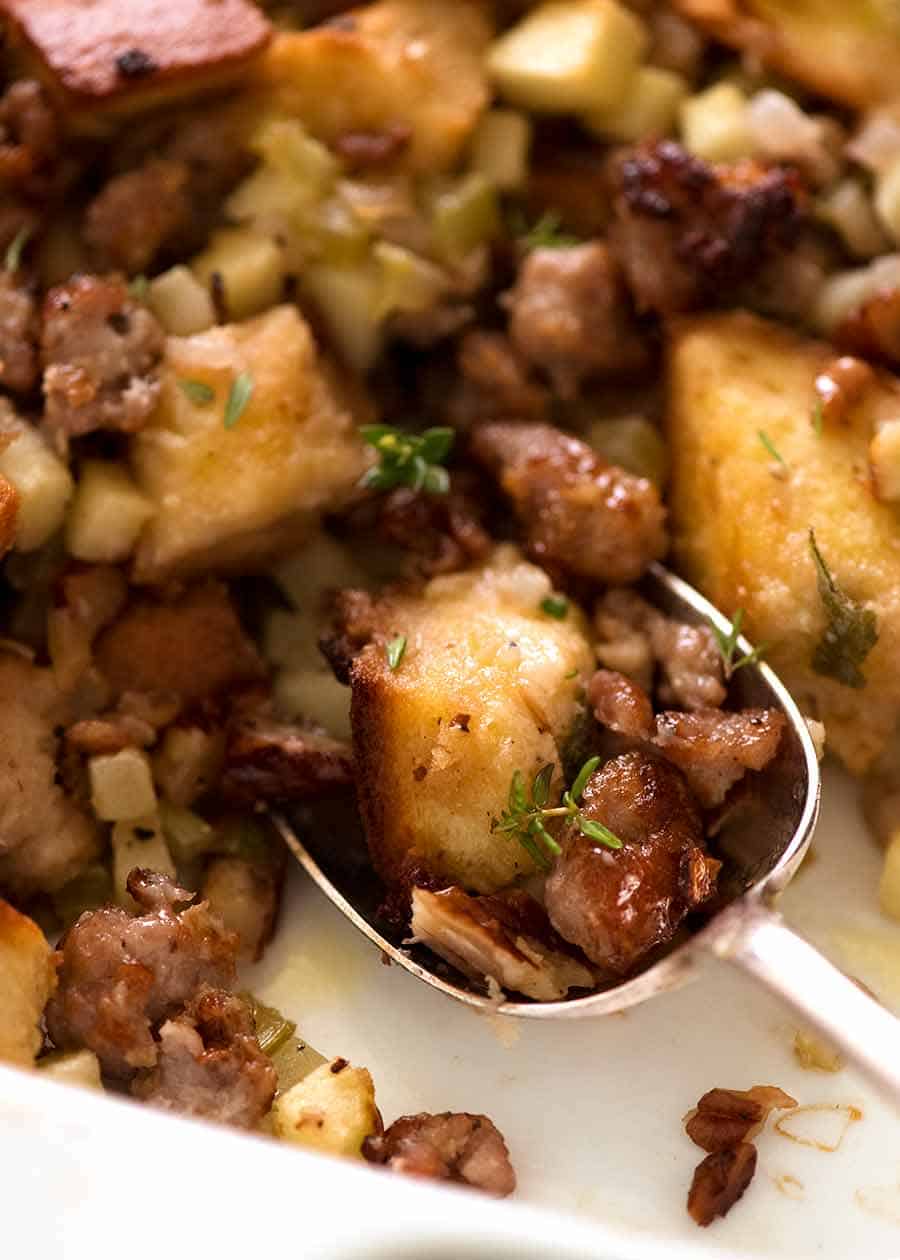 Why don’t you stuff this INSIDE chicken or turkey??

We all love the idea of stuffing inside turkey, but it poses a serious health hazard unless you overcook your turkey. Here’s why:

Reminder: overcooked turkey is really (really!) dry because turkey is such a lean cut of meat!

The answer? Make your stuffing this way – in a separate dish! (Besides, it’s so much tastier….) 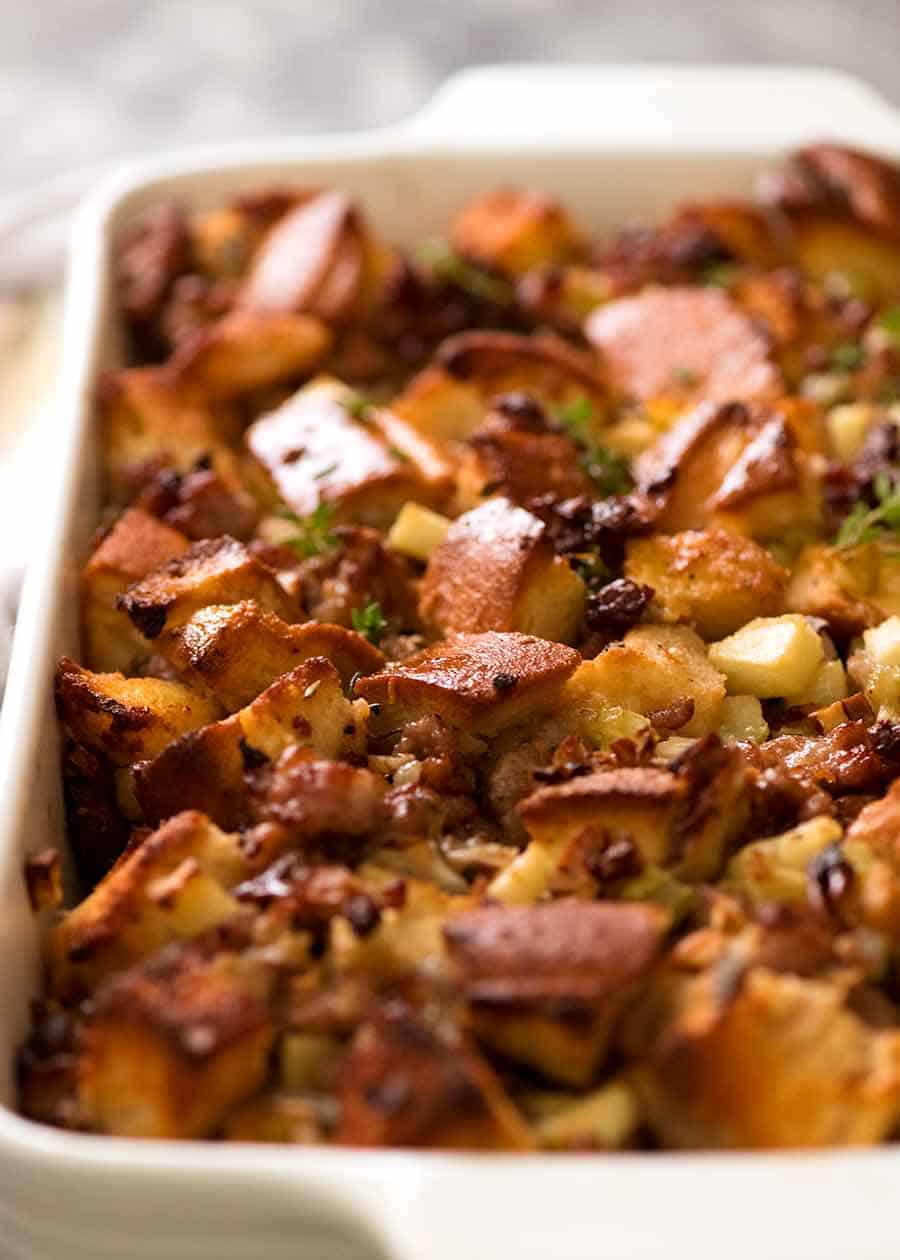 What goes in stuffing

Here’s what you need. The sausage adds tons of rich flavour into this stuffing (and the cream and butter helps too 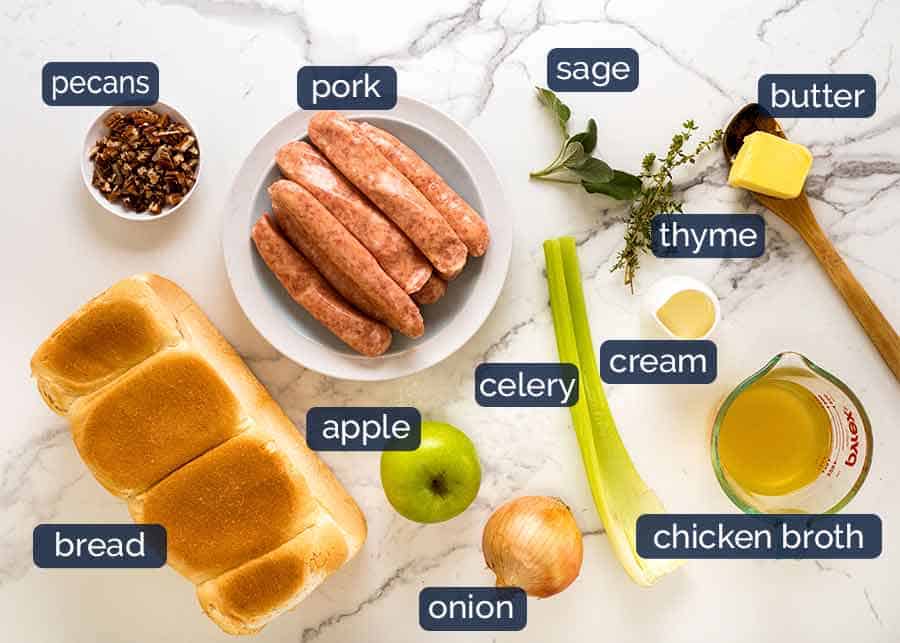 I’ve tried stuffing with artisan breads like good quality sourdoughs and you know what? They are too hard and chewy for stuffing. Your grandma will struggle! 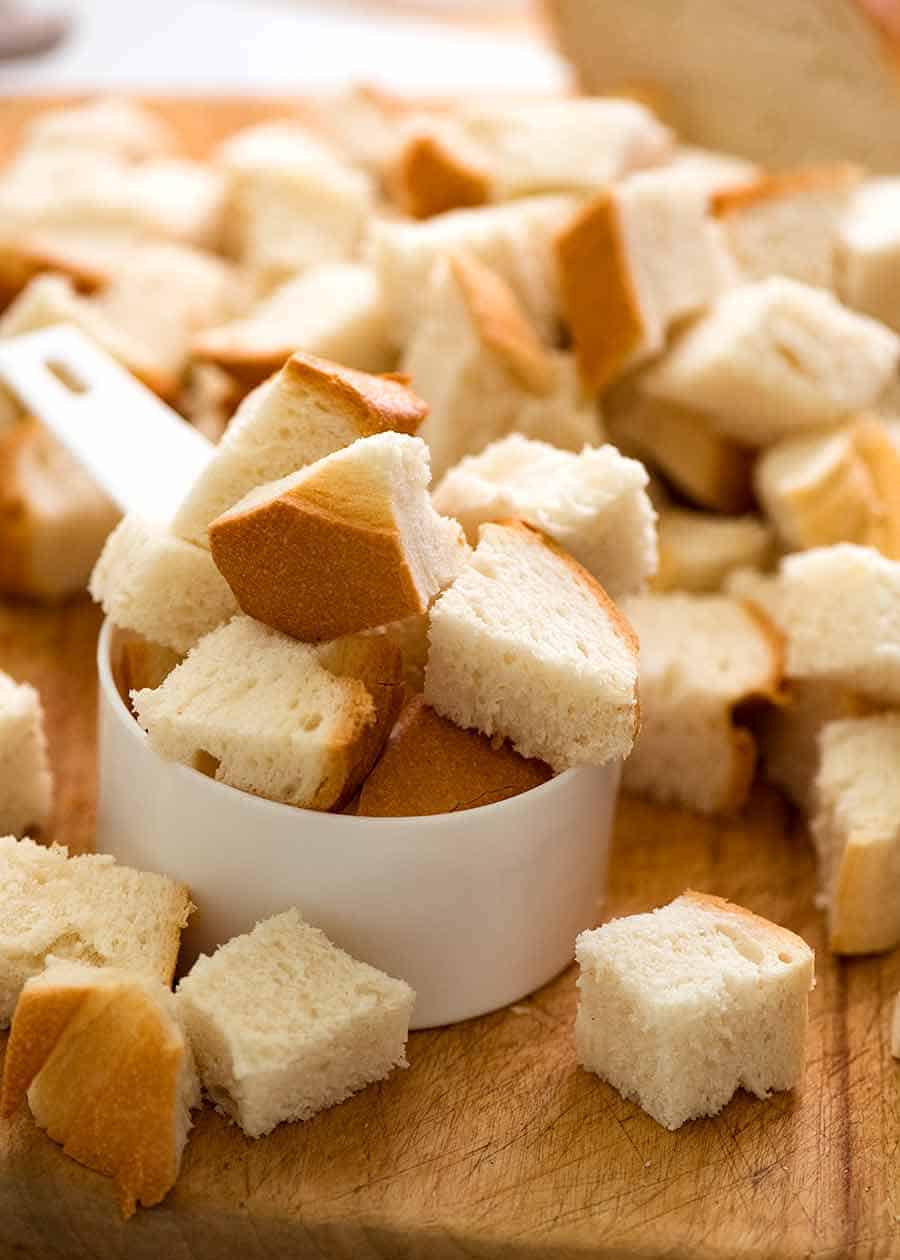 How to make stuffing

I like to brush the top with extra butter towards the end for extra butteriness. Don’t tell my trainer 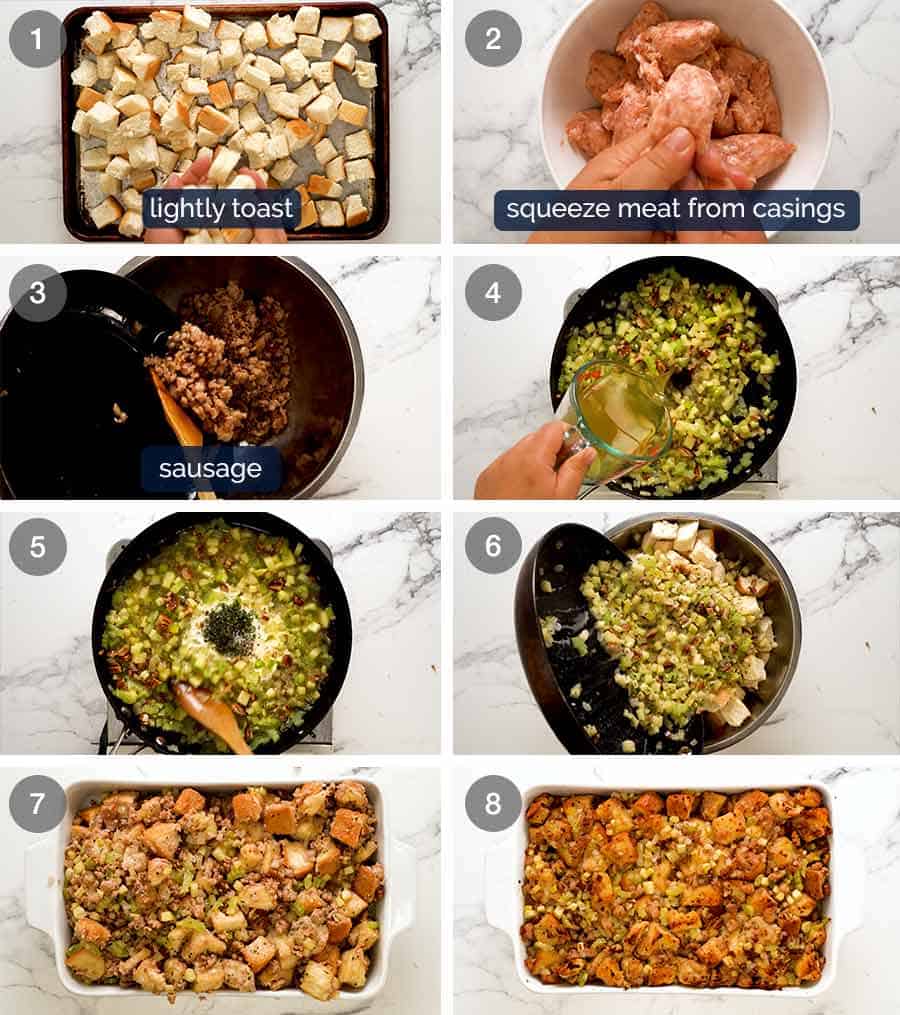 This stuffing recipe is a sensational mash up of textures and flavours. You get: 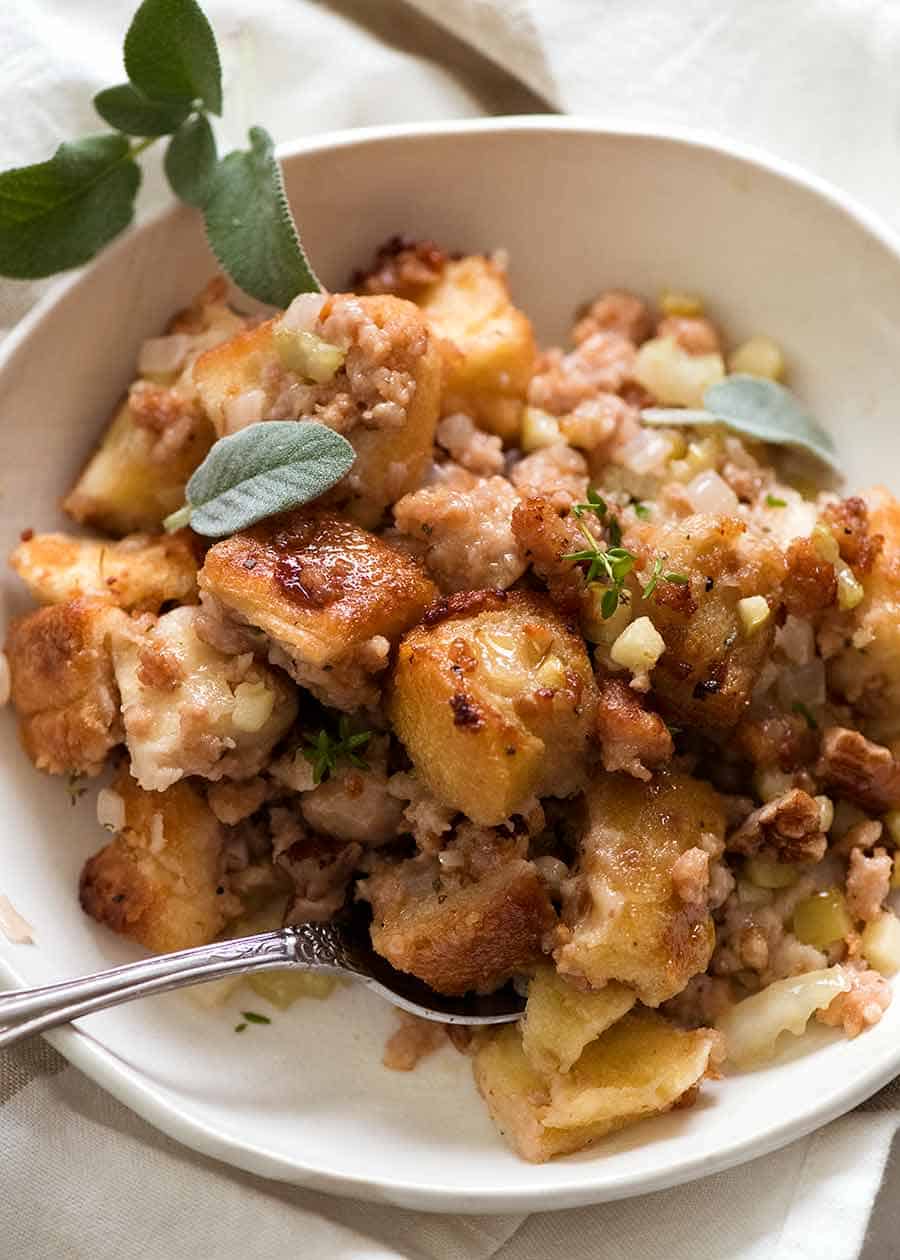 When and what to serve with stuffing

Typically associated as a side dish you’d serve at Thanksgiving or Christmas alongside turkey, roast chicken or pork (basically, anything that you’d traditionally associate as things that you can stuff with stuffing!), and I’ve heard many people declare that it’s their favourite thing on the menu.

That’s a very big call. But sometimes I wonder if I’m in that camp too.

Here’s a few Thanksgiving and Christmas centrepieces that would be ideal served alongside this stuffing: 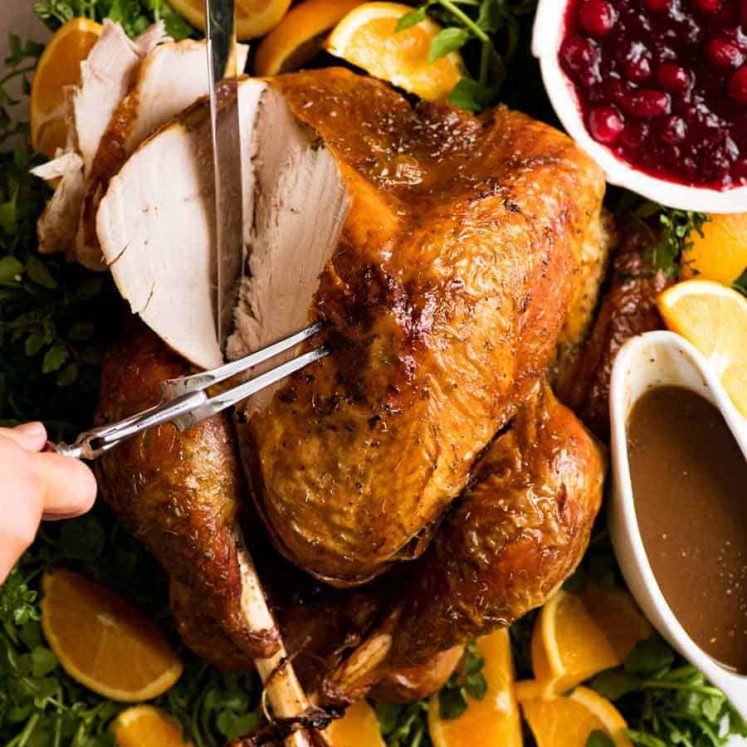 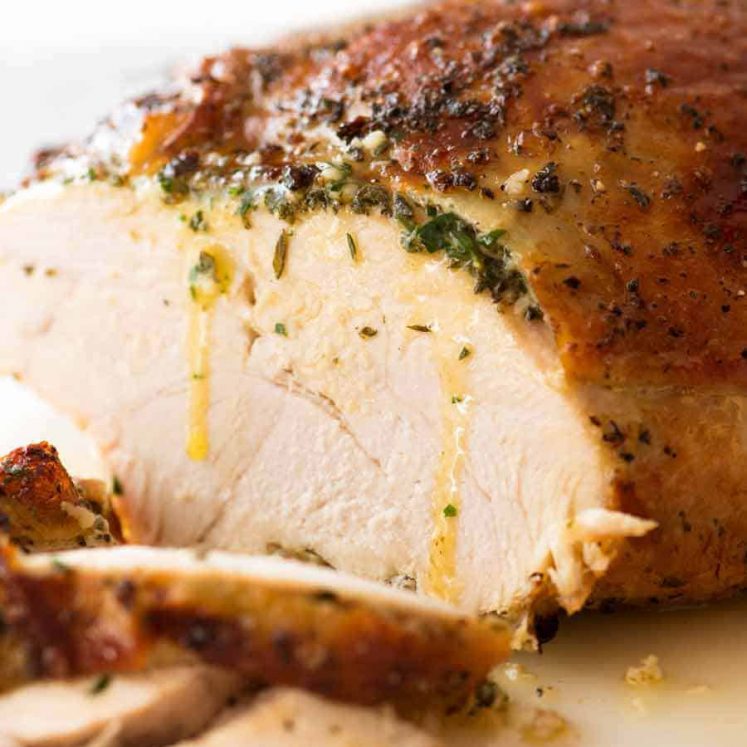 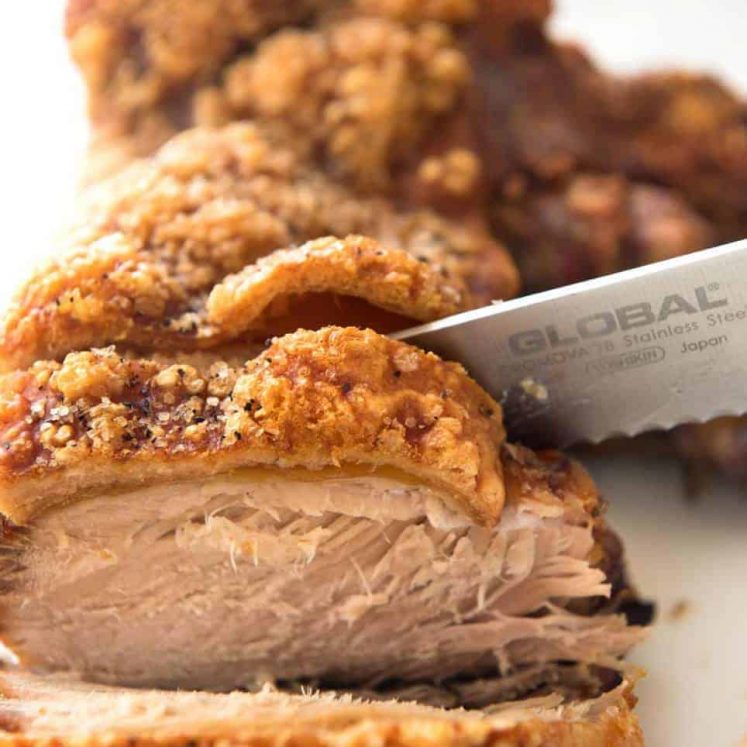 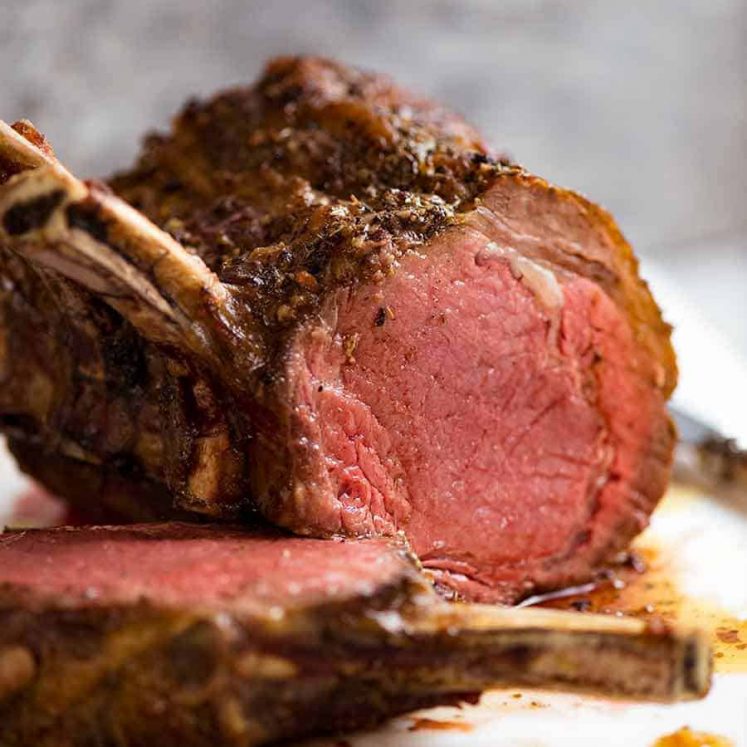 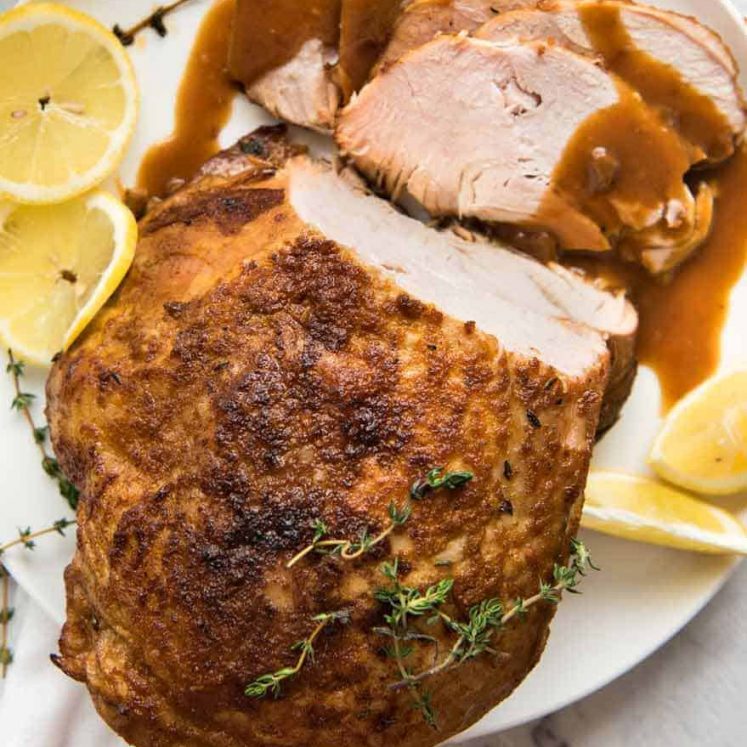 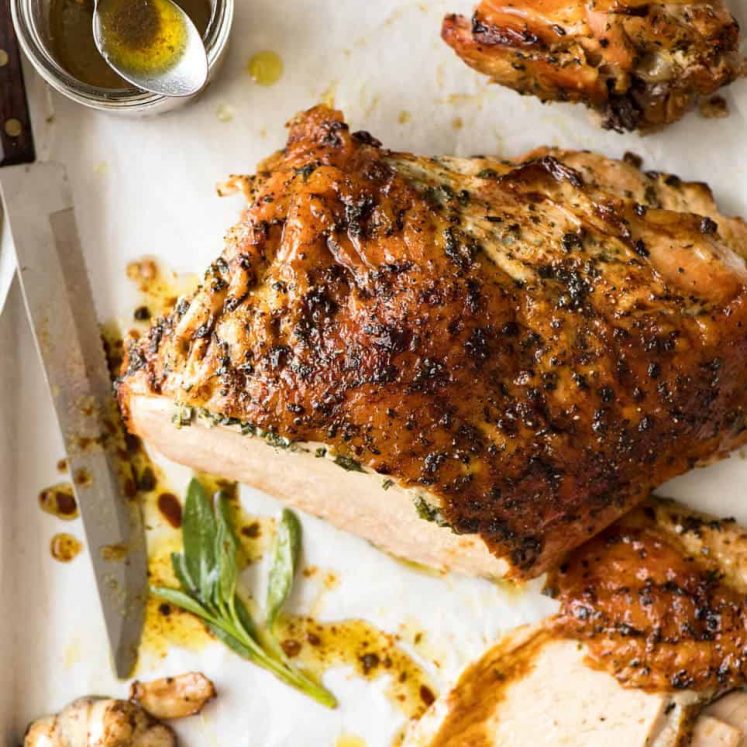 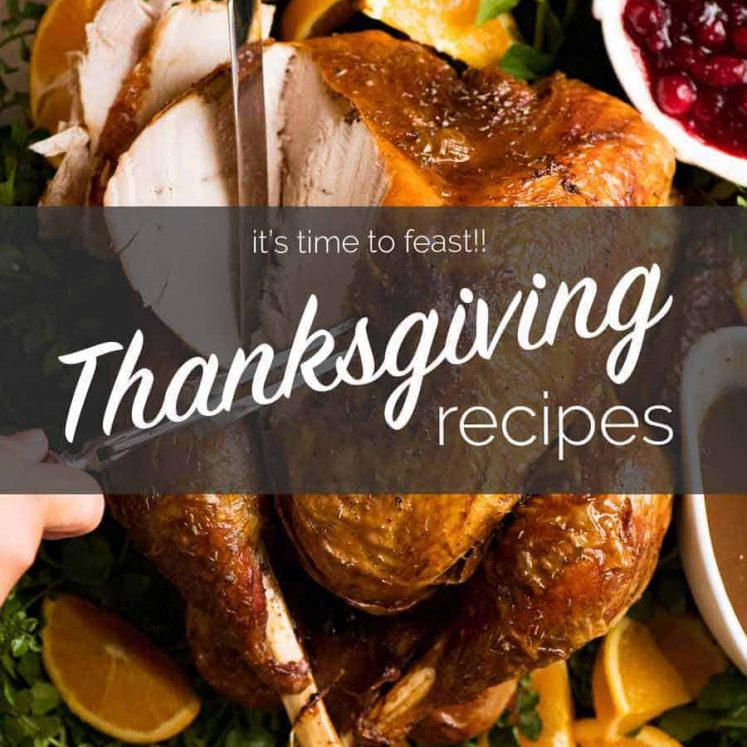 Though honestly? You could just serve this to me for Christmas lunch and I’d be one happy gal. Yep, it’s that good! – Nagi x 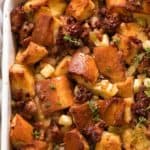 Recipe video above. Still the BEST stuffing recipe I’ve had in my life, adapted from this brilliant recipe by Hapa Nom. It’s got it all – golden, buttery crunchy top, soft and moist inside, big bold pops of salty sausage melded with juicy little bits of tart apple, a hint of crunch from pecans and subtle perfume from sage and thyme. The ultimate combo of flavour and textures. Amen!

1. Bread – plain, boring, standard white sandwich bread is best here. I find Artisan breads like sourdough is too tough and chewy for this recipe, especially given stale bread is best. It’s just too much effort to eat!

Measuring – use heaped cups ie pile bread cubes in a mound in a cup (see photo in post). Weight isn’t the right measure here as breads vary in density and weight.

Day old if possible but not essential (ie take out of packet and leave out overnight). Best if slightly stale because fresh bread gets soaked into mush but for this recipe, it’s not so much an issue because the bread is lightly toasted anyway.

2. Pork Sausage – the better the sausage, the better the stuffing! While you can buy sausage meat not in sausage form (ie sold like ground/mince meat), you’ll find that good pork sausages have better meat. Look for pork sausages where you can see the speckles of meat and fat, avoid the ones that are a uniform pink colour (cheaper). Plain pork sausages are what I usually use, but I’ve made it with Italian flavoured, herb & garlic, apple & cider – all are tasty!

3. Pecans – or walnuts. Chop then measure.

4. Make ahead – store the bread separately, combine the sausage into the liquid mixture in the skillet. Cool completely with lid on then store in fridge. On the day of, warm the sausage mixture (to loosen), pour over bread, assemble and bake per recipe.

Leftovers – cover and store in fridge for 3 to 4 days. I love making Stuffing Muffins:

5. Nutrition per serving. You don’t need much – it’s actually quite rich!! Serves 10 to 14 people depending on how many other sides you have. 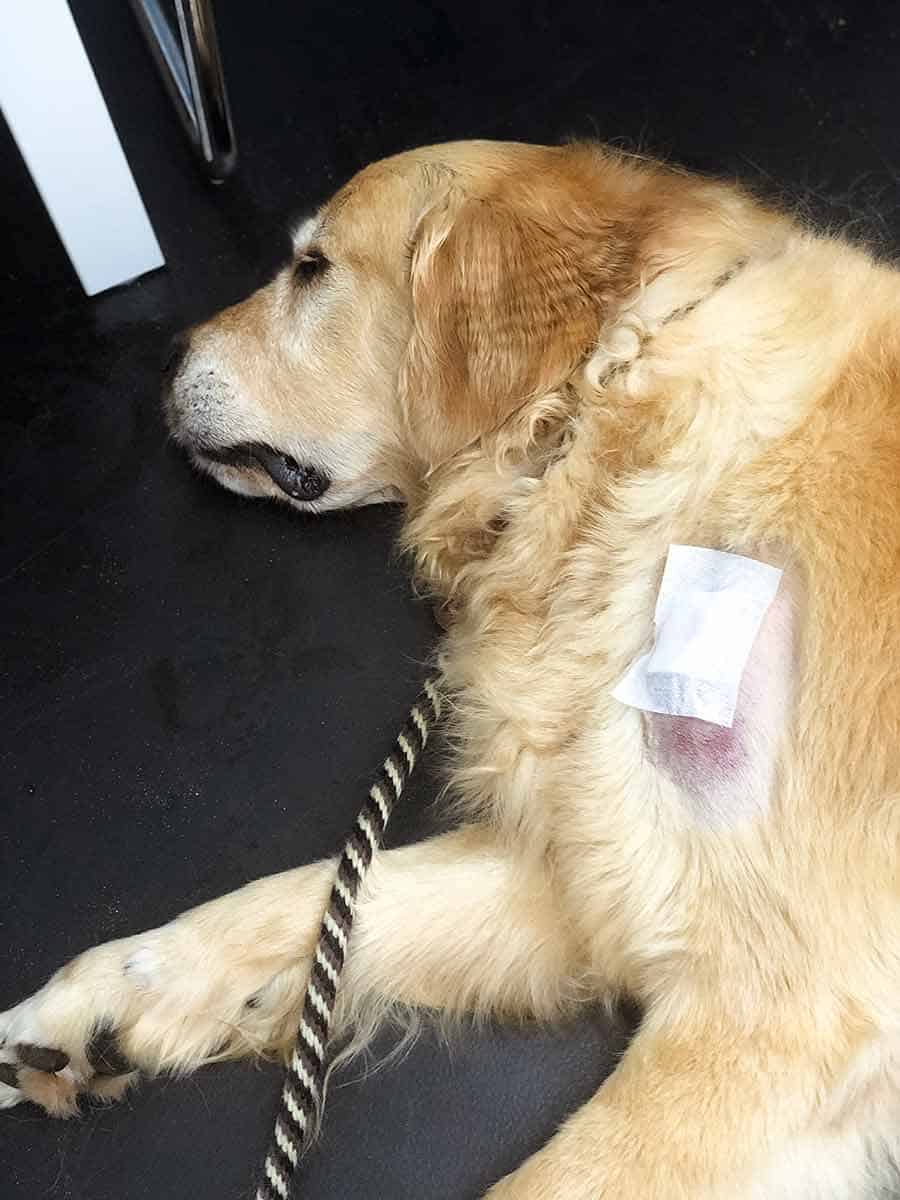 We had a bit of a drama the other day when Dozer got hooked by a fishing line at the dog park. The hook got caught in his shoulder, and unfortunately it didn’t come out the other side (which would’ve made removal much easier), it got buried in his shoulder muscle.

It seems he was attached to the fisherman’s line because the hook was bent and the line was snapped rather than cut. We think the force of him running away made the hook bend inside him 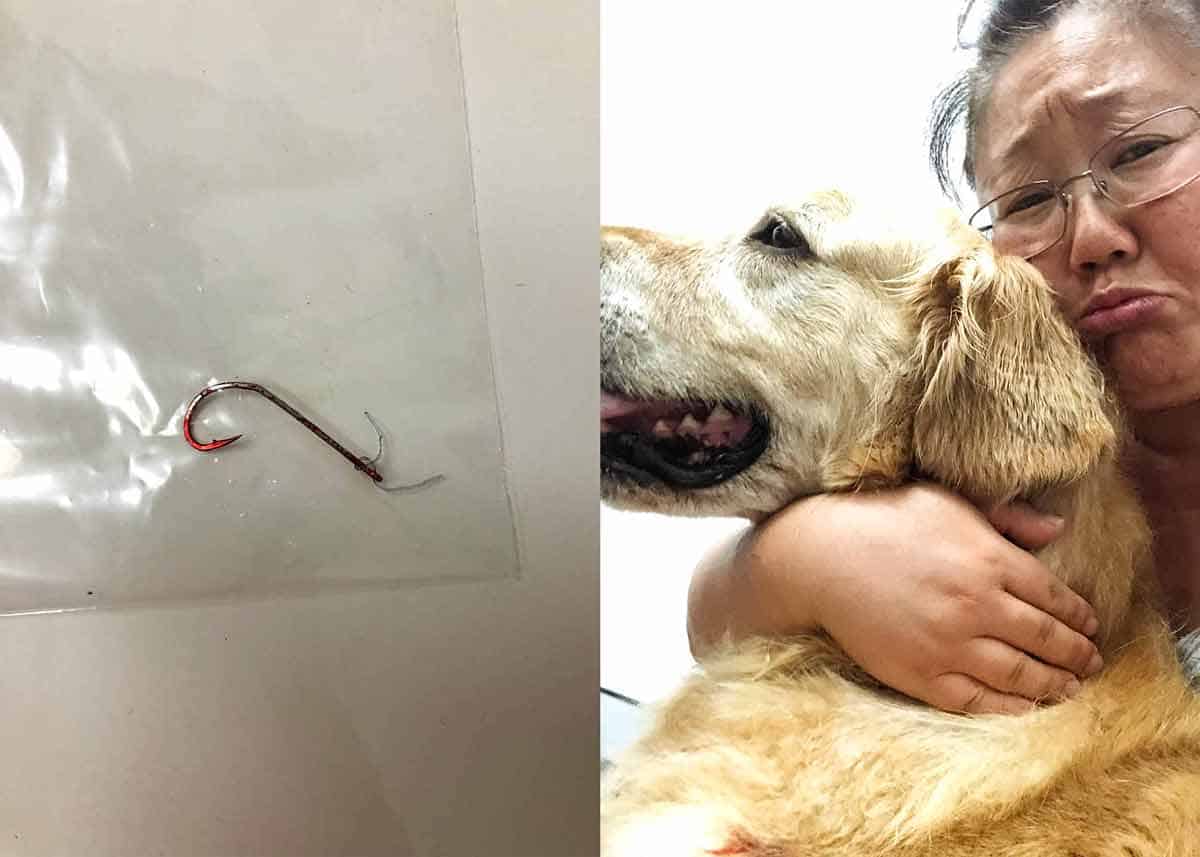 (I hope this photo doesn’t gross you out! I kept it because I’m going to petition council to BAN fishing at the dog beach!!)

It was buried so deep, only the little hole at the end was protruding which is why I didn’t notice. When we left the park, he leapt into the car to go home, leapt out, pranced around waiting for his bone, then dinner, then treats….. he showed no signs of pain or discomfort at all.

So I didn’t notice a thing until I saw his shoulder was bleeding which was later that evening. Once I realised what it was, and that it was buried almost vertically inside him, I knew I couldn’t remove it myself so off we dashed to the 24 hour Emergency Vet. 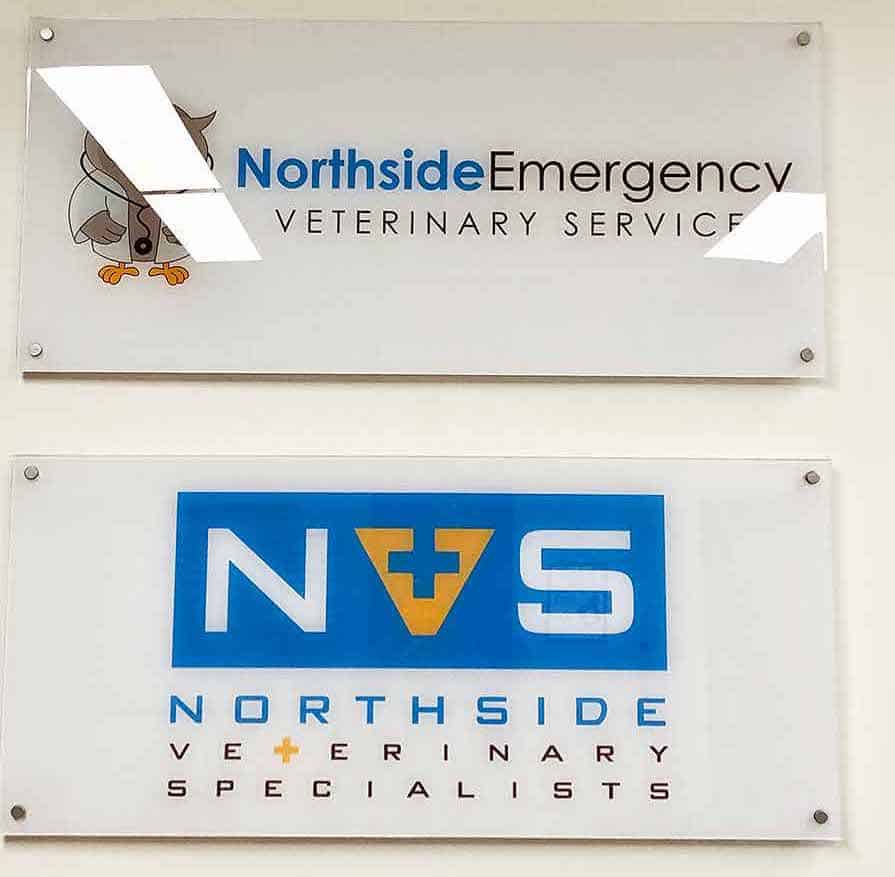 Usually, the other side of the hook pierces through so they just cut the barb off then slide the hook out – no big deal. In this case, the hook was fully buried inside so they’d have to make an incision large enough to slide the hook out (ooowwwww!!

Accordingly, the initial diagnosis was that he’d have to be put under a full sedative because it would be quite painful. I preferred that for Dozer’s sake too, because I didn’t want him to suffer.

But he surprised us all. After a mild sedative to calm him down, he walked into the surgery room and they were able to remove the hook without fully putting him under (while it avoids the pain, it’s always better to avoid a full sedative if you can). The vet was amazed – she said what they had to do would have been very painful, she couldn’t believe he let them do it!

So – Dozer the Brave. I was so proud of him. I know I couldn’t have done it!

I’m happy to report he’s on the mend. A quiet few days, letting that shoulder heal. Antibiotics and pain killers with mild sedatives. So he’s spending his days chill-axing like this. ↓↓↓ And getting LOTS of love and attention from everyone. Including early Christmas presents. Back to being a spoilt brat!! – N x

PS To those who spied and inquired about his bandaged foot, it was to minimise the damage he’d do to the wound by scratching himself with his hint paw! 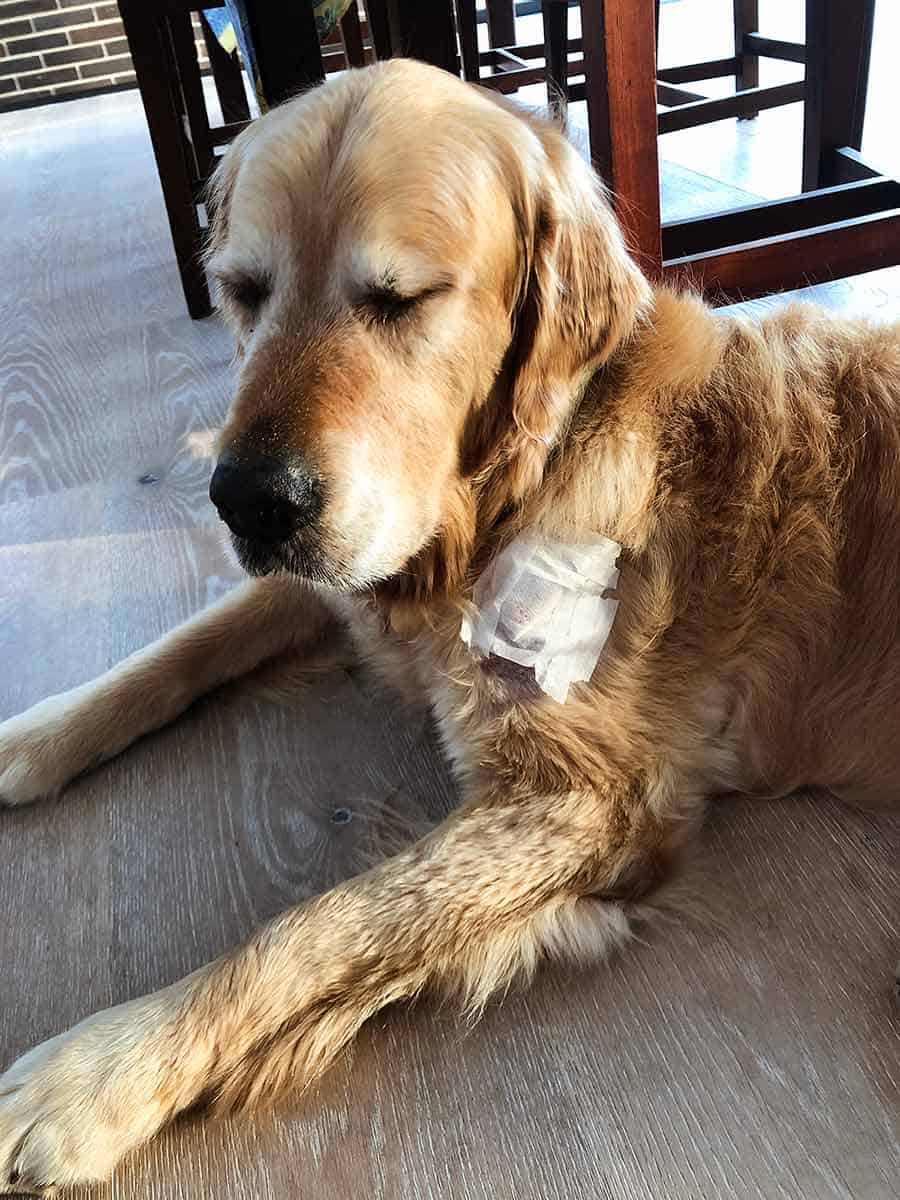 The post Still the BEST Stuffing ever! appeared first on RecipeTin Eats.