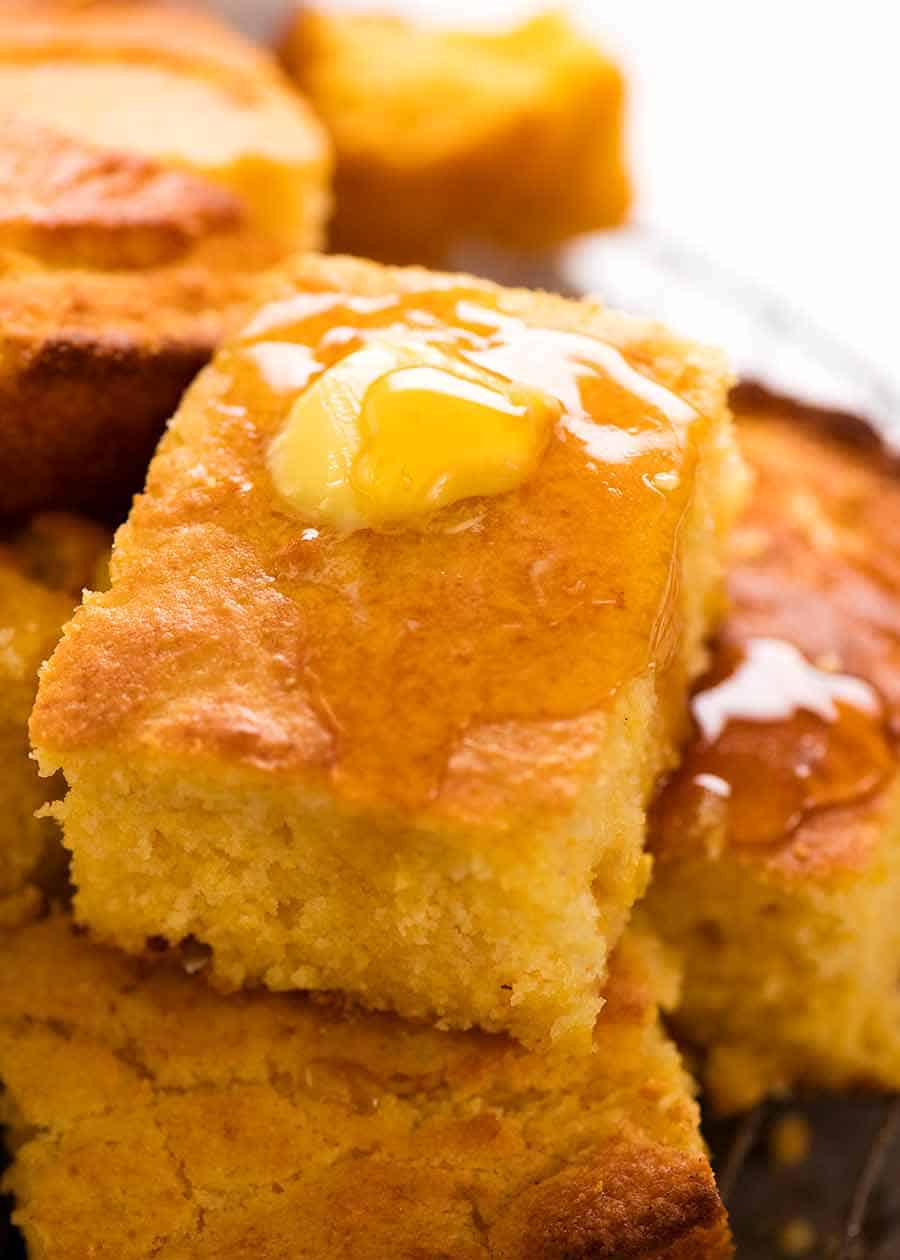 To-die-for Cornbread! Crispy edges, it’s soft on the inside, savoury with a touch of sweet and so moist, you don’t need butter to scoff it down (but who in their right mind would skip butter…??) This is quick cornbread recipe that will be on your table in 30 minutes.

Serve it as a side dish, dunk into stews, take it to gatherings or have it as a snack!

I don’t want to brag, but I am known for my cornbread.

OK, it sounds like I’m totally bragging – but let me have just this one. Tarely do I say my recipes are the BEST version in the world! (Because who is to say one’s Chocolate Cake or one’s Meatloaf or Chili is the BEST in the world??).

This cornbread regularly makes an appearance all year round for a variety of purposes. As a side dish for a meal (especially Southern themed, like alongside Pulled Pork). As a snack or for afternoon tea – because it’s got more flavour than just plain bread rolls. Dunked into slow cooked stews.

And also to take to gatherings when I’m told “not to bring anything” or where I’m not specifically told what to bring, what others are bringing or if there’s a theme. Because cornbread is a generic all-round crowd pleaser that has a place at any meal – and it’s super quick to make!! 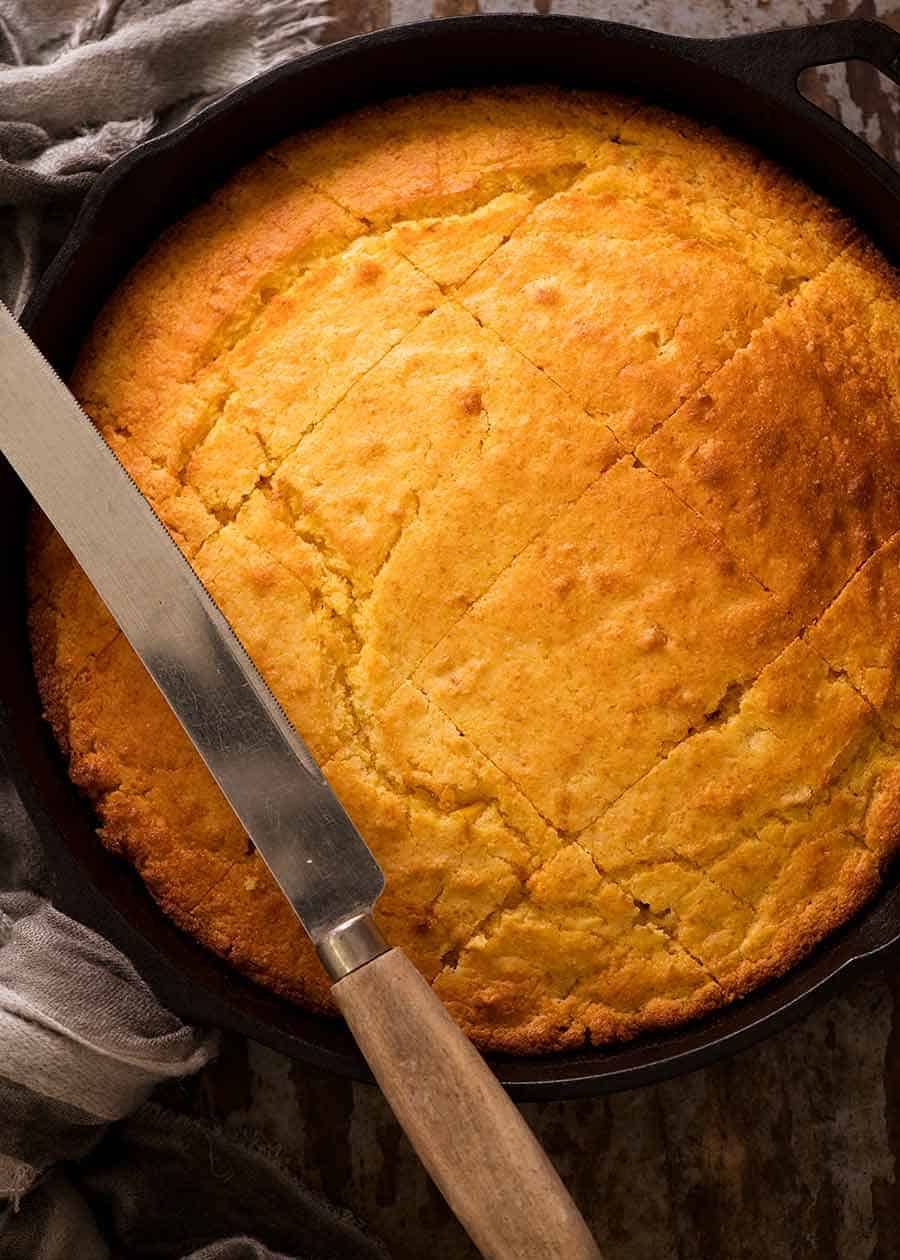 What you need for cornbread

Here’s what you need. 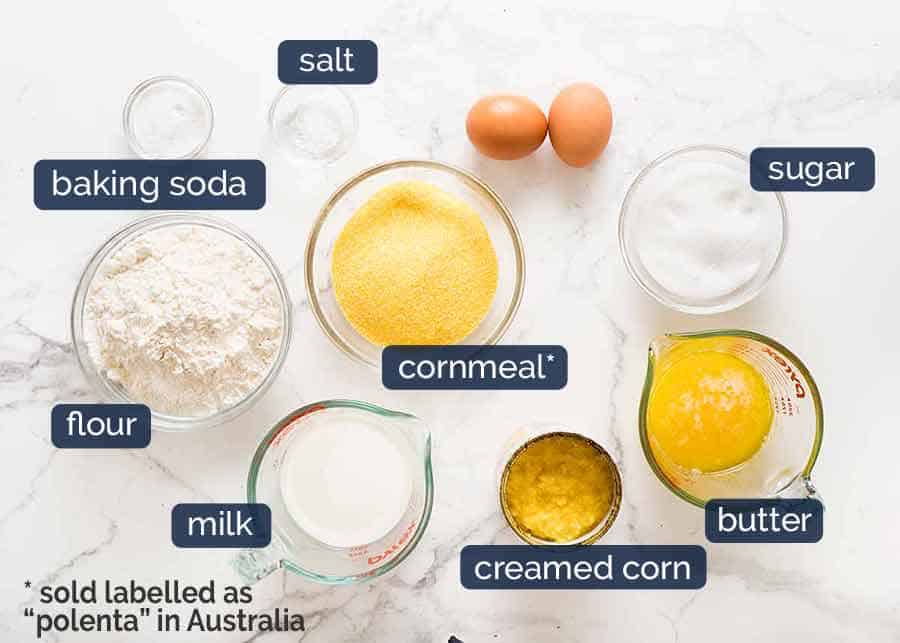 A note on a few of the items:

How to make cornbread

And here’s how to make it. It’s as simple as: 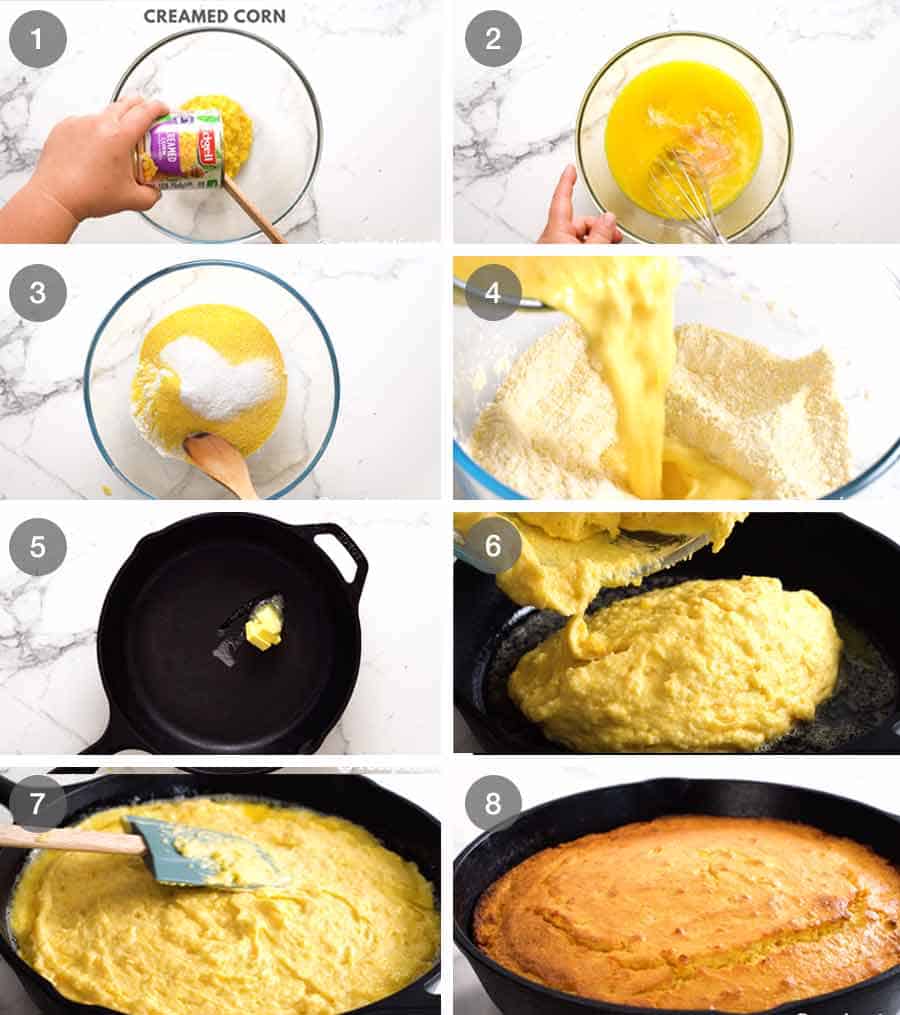 You’ll love how it comes out with crunchy buttery edges, that beautiful golden brown top and how moist it is on the inside! 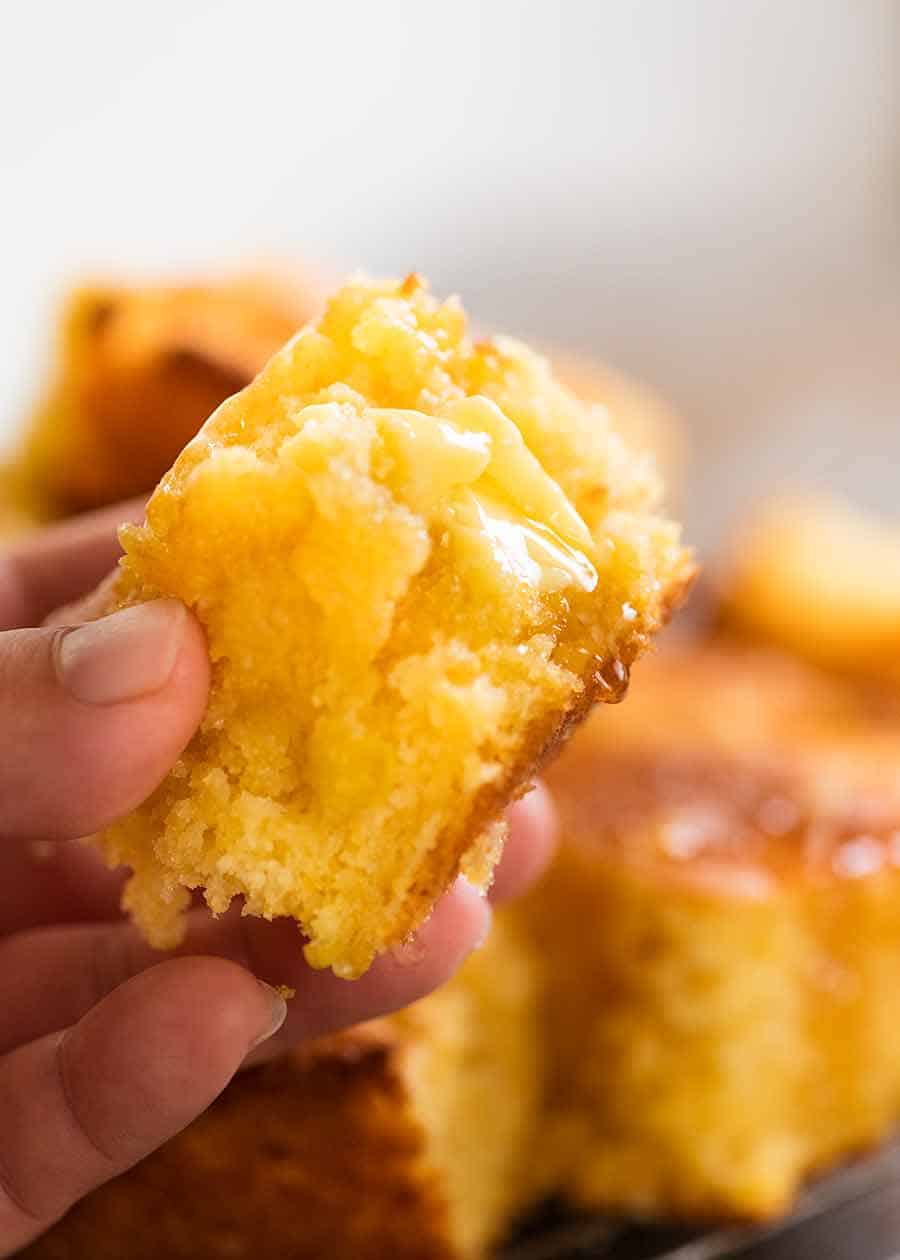 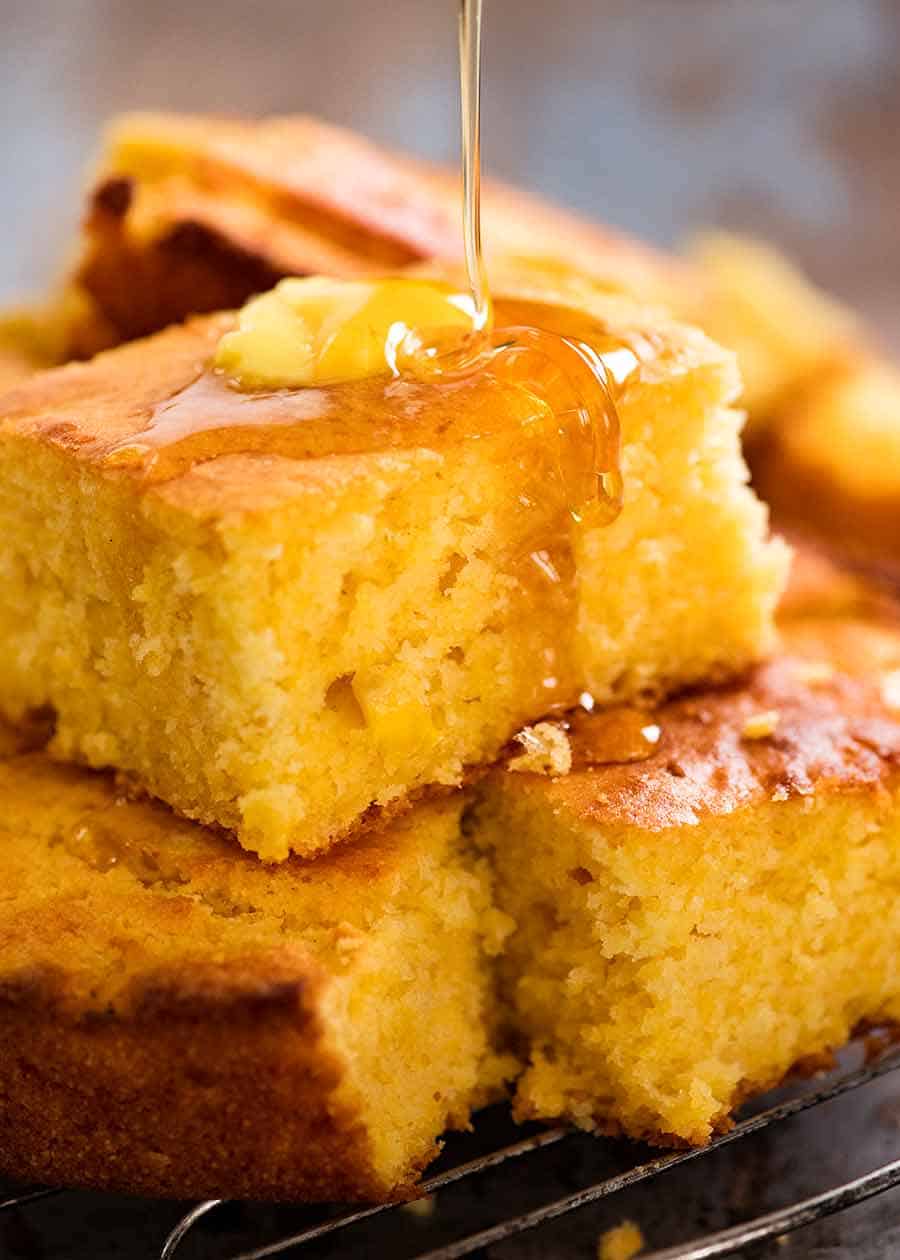 How to serve cornbread

Cut it into pieces – large or small – and serve it warm if you can so the butter melts and oozes into the bread.

To take it over the top, add a drizzle of honey – it’s an experience worth trying at least once! And served like this, it’s definitely worthy of serving by itself – at book club, as a snack, afternoon tea with friends.

It’s right at home as a side for Thanksgiving, Christmas, Easter, Sunday Supper, casual lunches and BBQ’s. Dunk it into Chili, serve it with Pulled Pork smothered in an incredible homemade BBQ Sauce….

Ugh, my knees are going weak at the mere though!!! – Nagi x 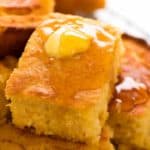 Recipe video above. This cornbread is super moist, not too sweet and not crumbly! It’s a Northern style corn bread that’s super quick and easy to make. Also see Cornbread Muffins!

1. Cornmeal –  Sold in packets labelled as “Polenta” in Australia.

3. Make head – This can be made ahead and reheated in the oven at 180C/350F for around 10 minutes. Or microwave briefly to warm through. Do not leave in skillet overnight – it will take on a metallic flavour.

Originally published December 2014, updated November 2019 with fresh new photos, new video and Dozer in his adorable outfit that he hates so much!

Winnie the Pooh was always my favourite growing up… so I couldn’t resist this outfit!! 😂 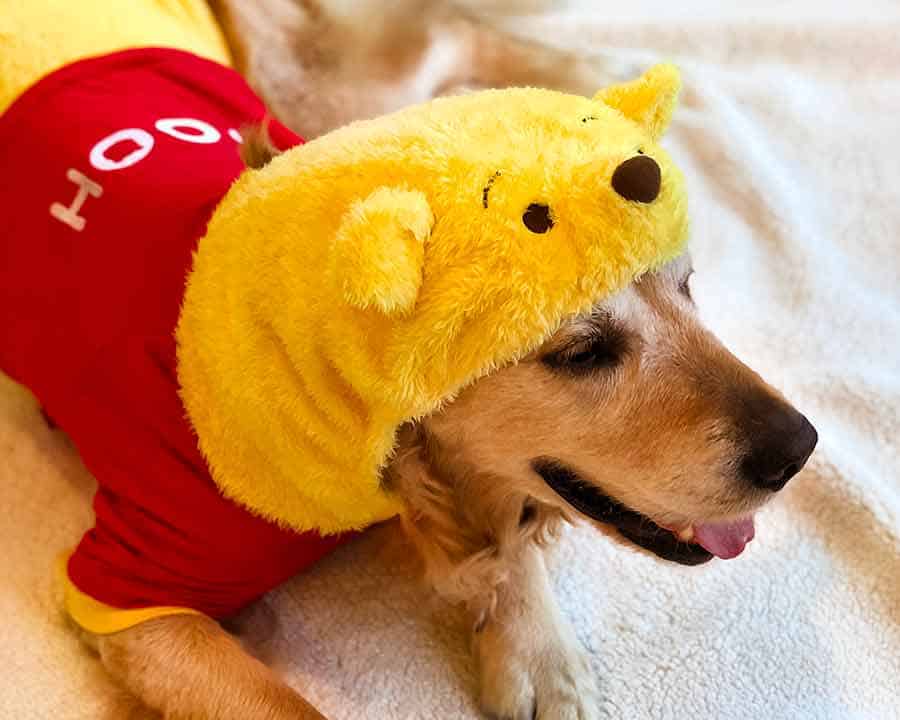