I’m living off refrigerator salads all summer, what about you? Oh, you don’t know what a refrigerator salad is? It’s a salad that holds up well to refrigeration (doesn’t go limp and soggy like lettuce), and a meal prepper’s best friend. During the summer months I love mixing up a big batch of refrigerator salads, like this Lemony Artichoke and Quinoa Salad, to eat all week. Sometimes I eat them alone as a light entrée, sometimes I use them as a side dish, sometimes as a base for bowl meals. They’re versatile, delicious, and never go to waste in my house! 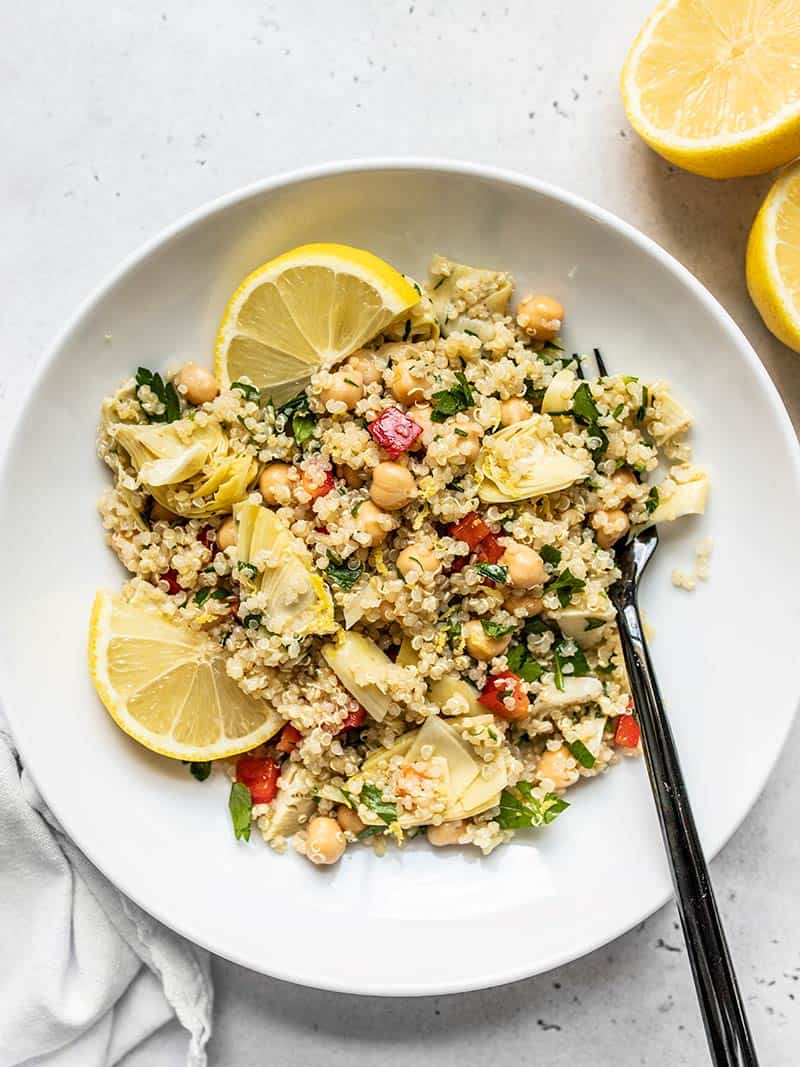 This Lemony Artichoke and Quinoa Salad is basically a summer version of my Spanish Chickpeas and Rice. It’s a little lighter, brighter (no smokiness), and served cold. It’s perfect for this scorching heat!

This salad is super versatile, so here are some other ingredients that would go well in this salad, in case you don’t like any that I’ve included, can’t get them for a decent price, or just happen to have some of these items on hand and need to use them up:

How to Serve Lemony Artichoke and Quinoa Salad

I intended this dish to be a vegetarian/vegan main dish with a large serving size of 2 cups, but it could also be served as a side dish to any other meal (smaller serving size of about 1 cup). This would make a great base for a bowl meal (add grilled chicken or hard boiled egg), or could be stuffed into a pita as a sort of sandwich.

How Long Does This Salad Keep?

This Lemony Artichoke and Quinoa Salad is very sturdy, so it’s good for about 4-5 days in the refrigerator (time may vary with refrigeration conditions). I haven’t tried freezing this one yet, but based on how well my Roasted Cauliflower and Quinoa Salad freezes, I think this one would also freeze well. I find frozen foods like this are usually best if eaten within three months. 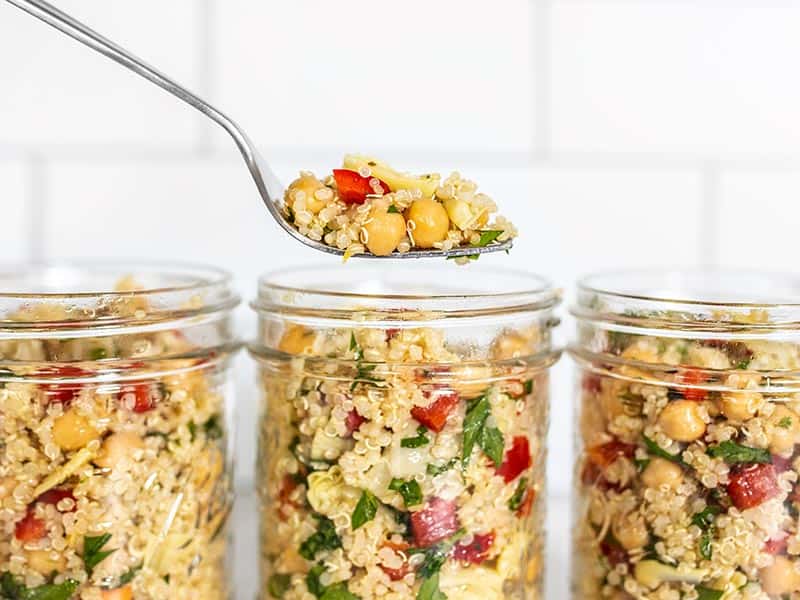 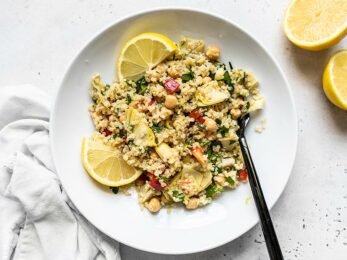 This Lemony Artichoke and Quinoa Salad is a light and refreshing summer salad that holds up well in the refrigerator and is perfect for meal prep!

*You can use artichoke hearts in water or oil, with or without herbs.

Keep scrolling to see the step by step photos below… 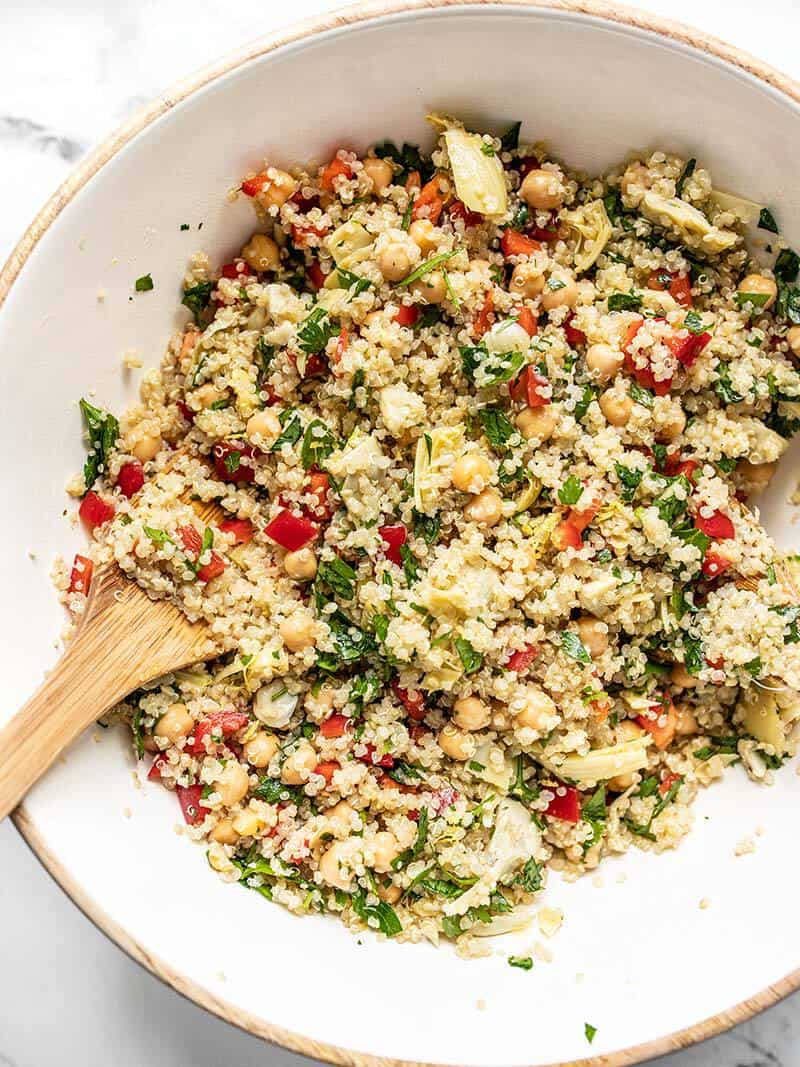 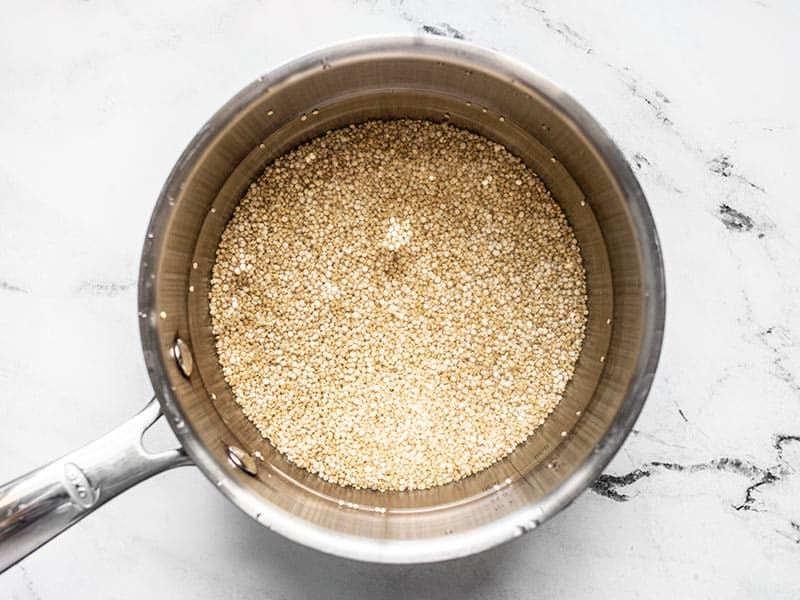 Rinse 1 cup of quinoa well in a wire mesh sieve. Once rinsed, add it to a pot along with 1.75 cups water. Place a lid on pot and turn the heat on to high. Let the water come up to a boil. Once it reaches a boil, turn the heat down to low, and let it simmer for 15 minutes with the lid in place. 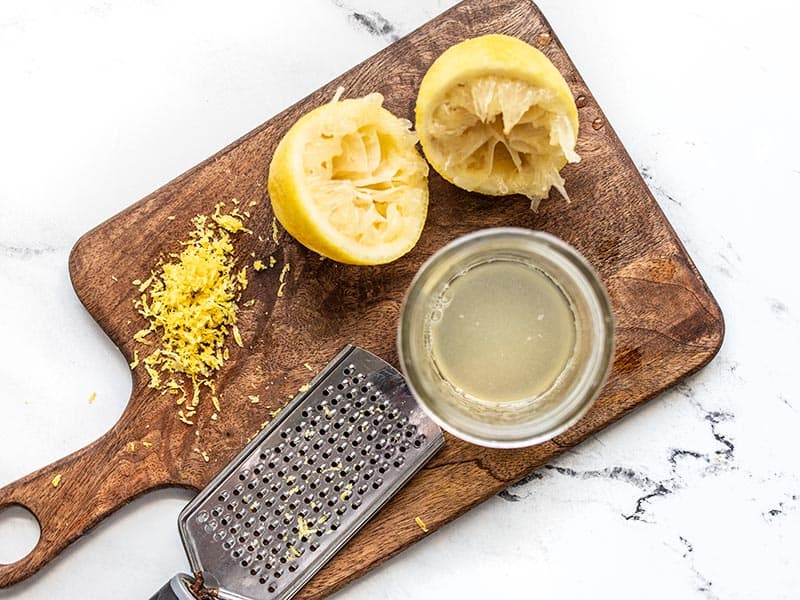 While the quinoa is cooking, prepare the lemon garlic dressing. Zest a lemon, then squeeze out the juice. You’ll need anywhere from 1/4 to 1/3 cup juice. 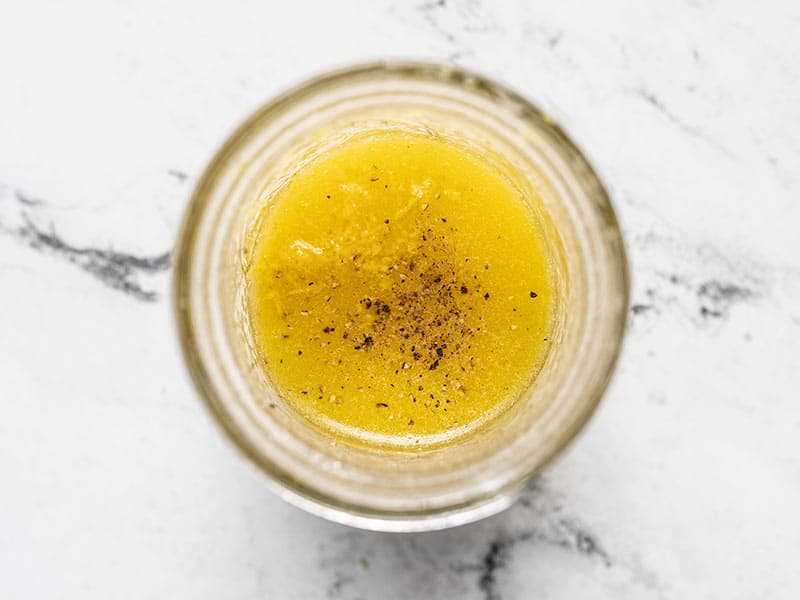 Add 1 tsp of the lemon zest, 1/4 cup olive oil, 2 minced cloves of garlic, 1 tsp salt, and some freshly cracked pepper (10-15 cranks of a pepper mill) to the lemon juice. Whisk the ingredients together, or, if using a jar, shake until the ingredients are combined. Set the dressing aside. 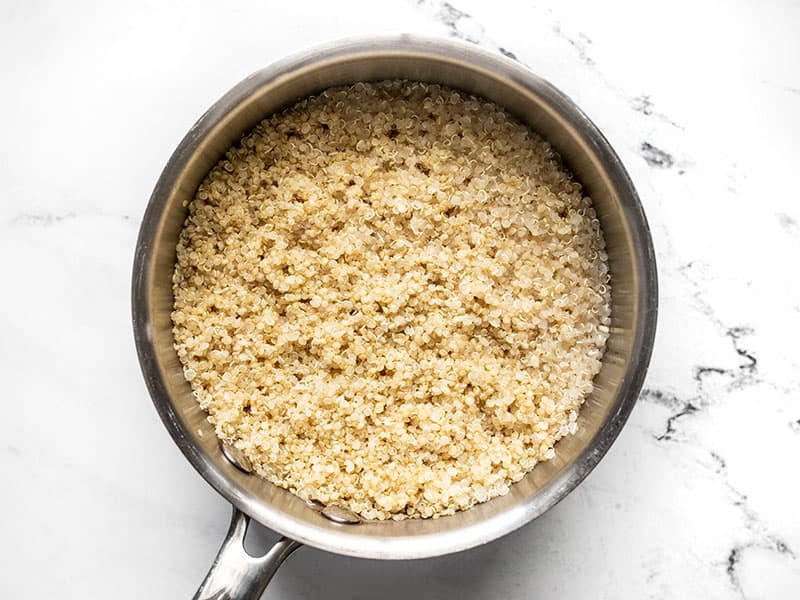 After simmering for 15 minutes the quinoa should be tender and fluffy, an no liquid should remain in the pot. 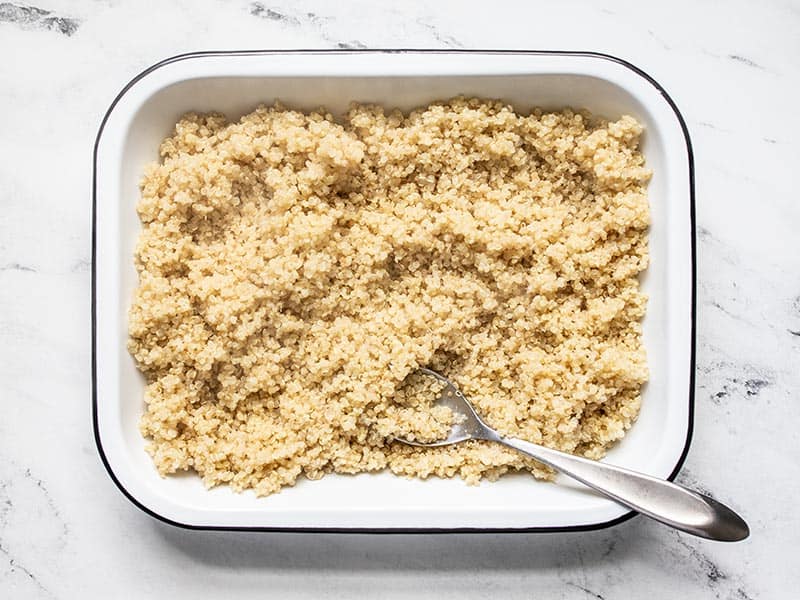 Spread the quinoa out into any sort of shallow dish then place it in the refrigerator to cool for about 15 minutes. Spreading it out is key because that increases the surface area in contact with the cold air and allows any excess moisture to evaporate. 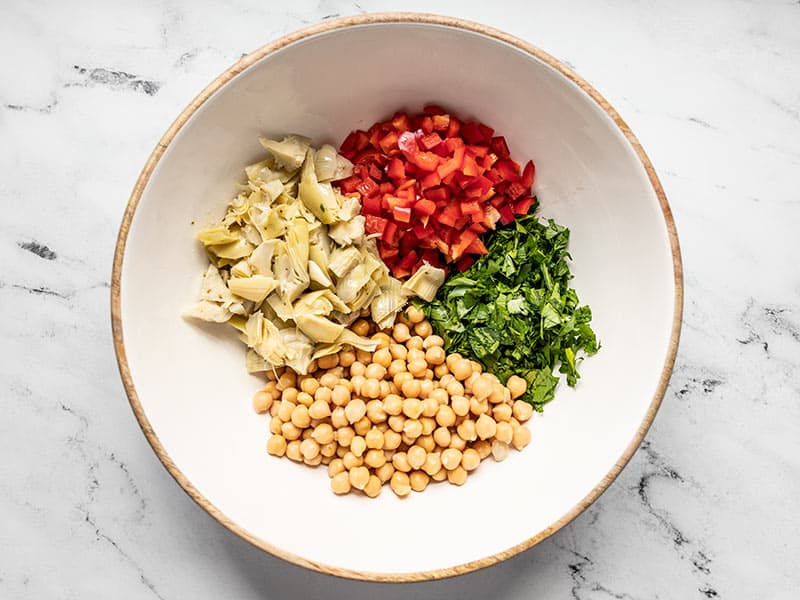 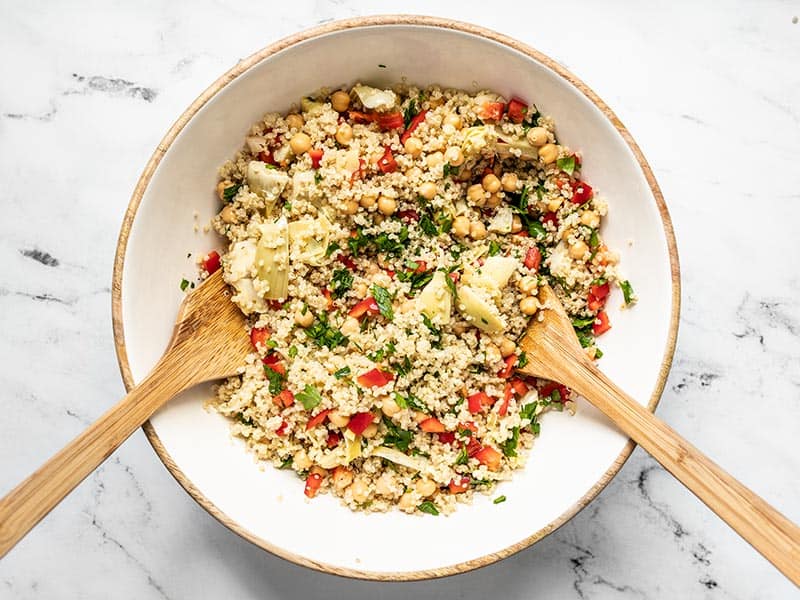 Once the quinoa is cooled, add it to the bowl with the rest of the ingredients and gently toss to combine. 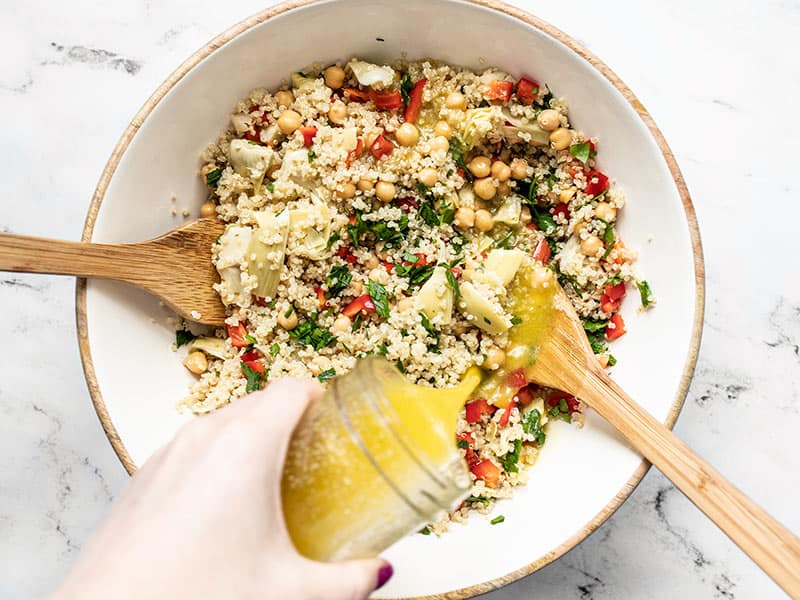 Pour the lemon garlic dressing over the salad and toss once more until everything is coated in dressing. 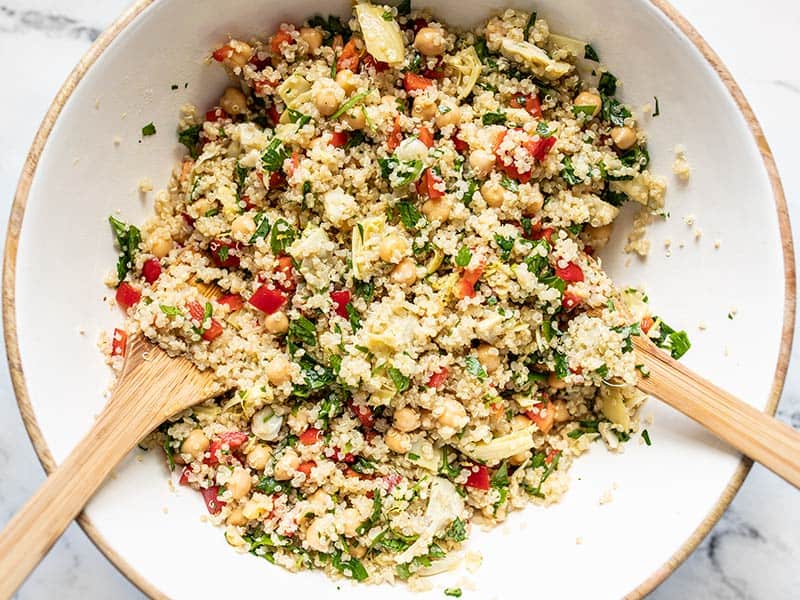 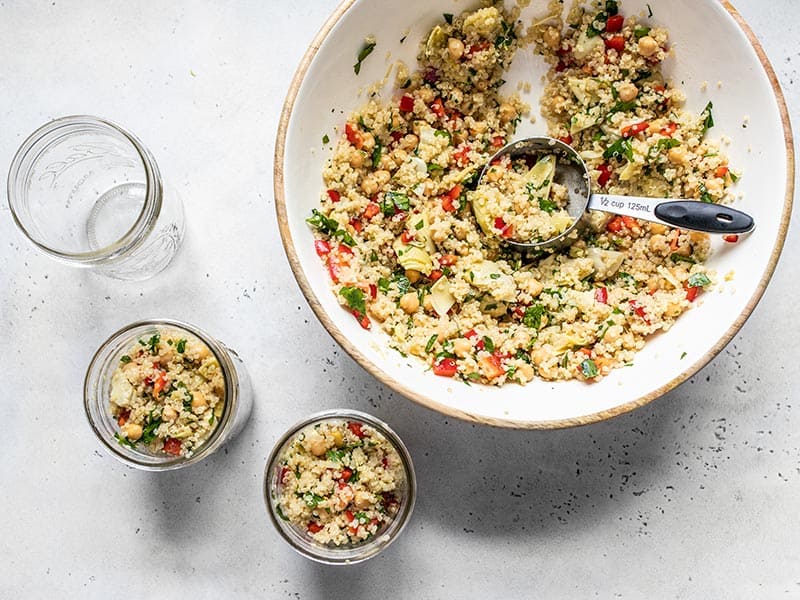 Or portion it out into containers for your meal prep and refrigerate up to 4-5 days. 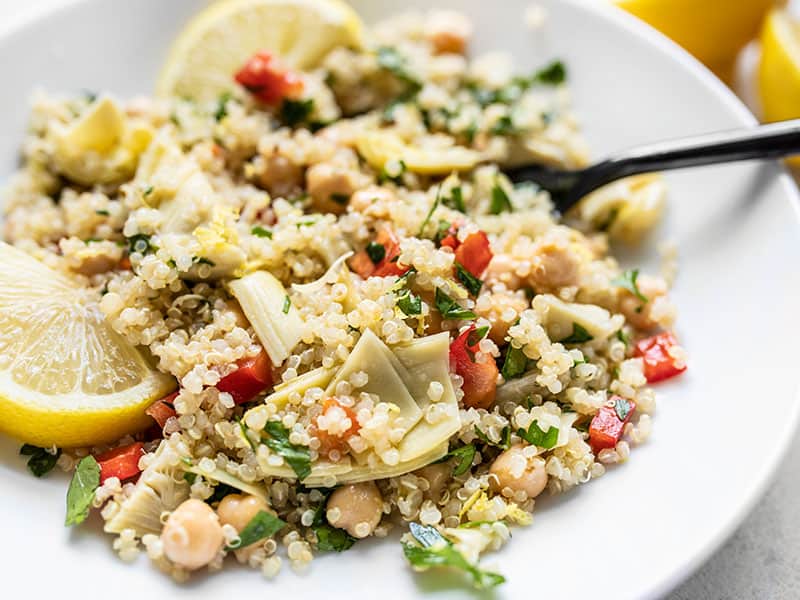 So light and refreshing!