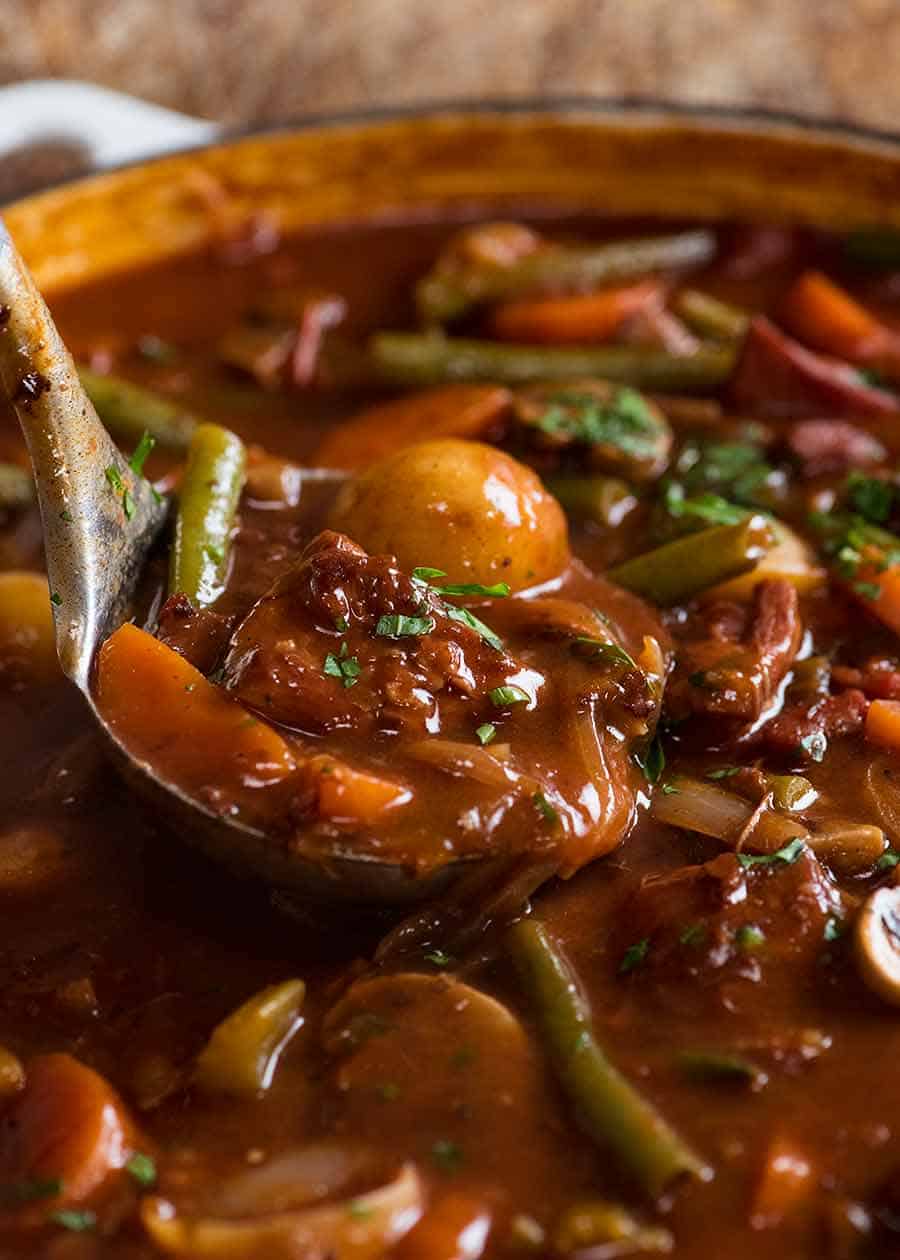 This is the faster way I make Chicken Stew – using boneless chicken thigh fillets cut into large pieces, simmered with vegetables until tender in a rich, dark stew sauce. It’s a Chicken Casserole made in an hour, but tastes like it’s been simmering all day!

I feel like the word “stew” conjures up visions of slow cooked goodness that’s been simmering on the stove all day. And our patience is always rewarded with the deep flavours you can only achieve through slow cooking. Beef Stew, Guinness Stew, slow cooked Chicken Stew and Pot Roasts.

This speedier Chicken Stew is for all the days when you want the slow cooked flavour – fast! It takes under an hour to make, and it’s loaded with plenty of veggies and potatoes swimming in a rich stew sauce!

This speedier Chicken Casserole tastes like it’s been simmering all day… look at that rich sauce!! 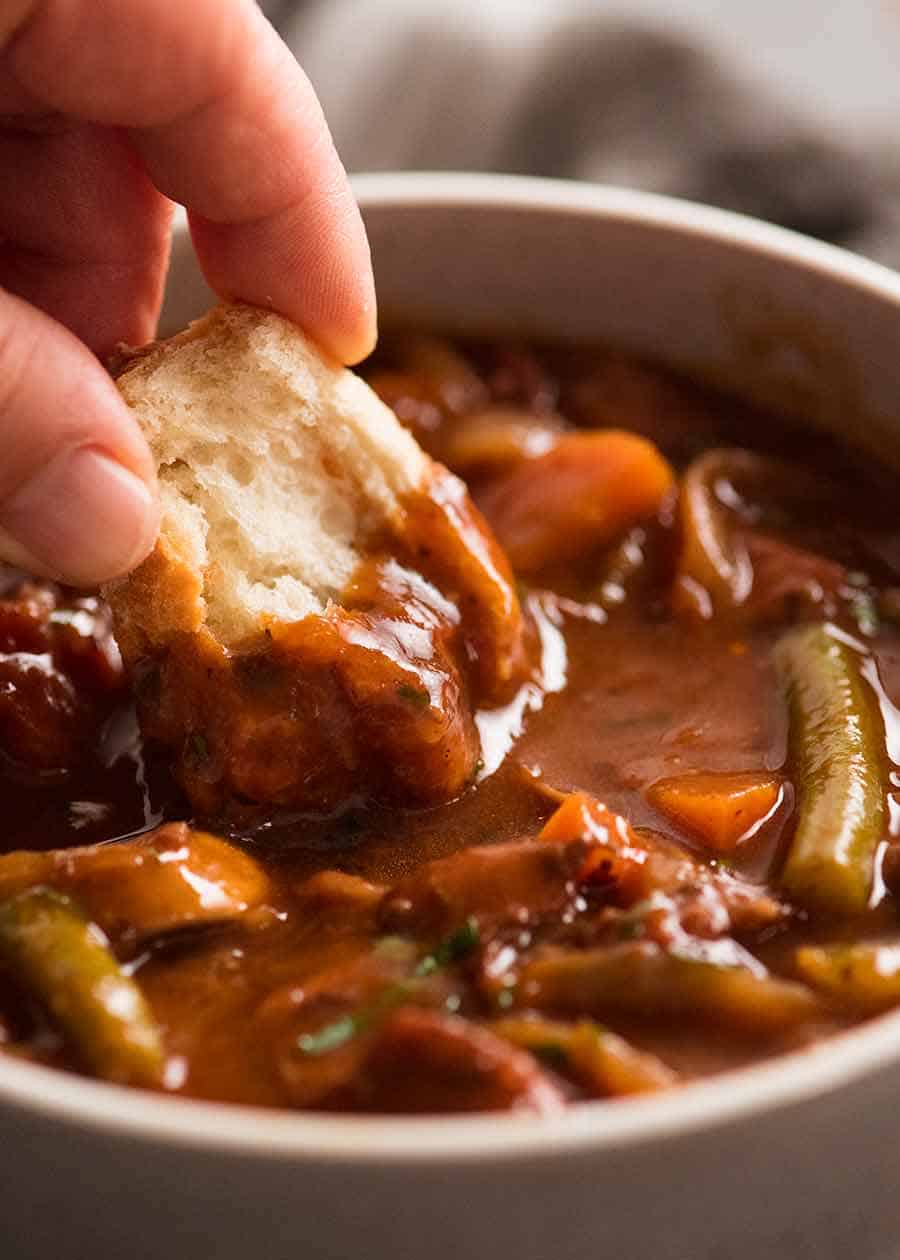 Here are the things in this recipe that ups the flavour quota even without slow cooking for hours:

There’s a decent amount of veggies in this, so you can serve it as a meal without extra veg sides 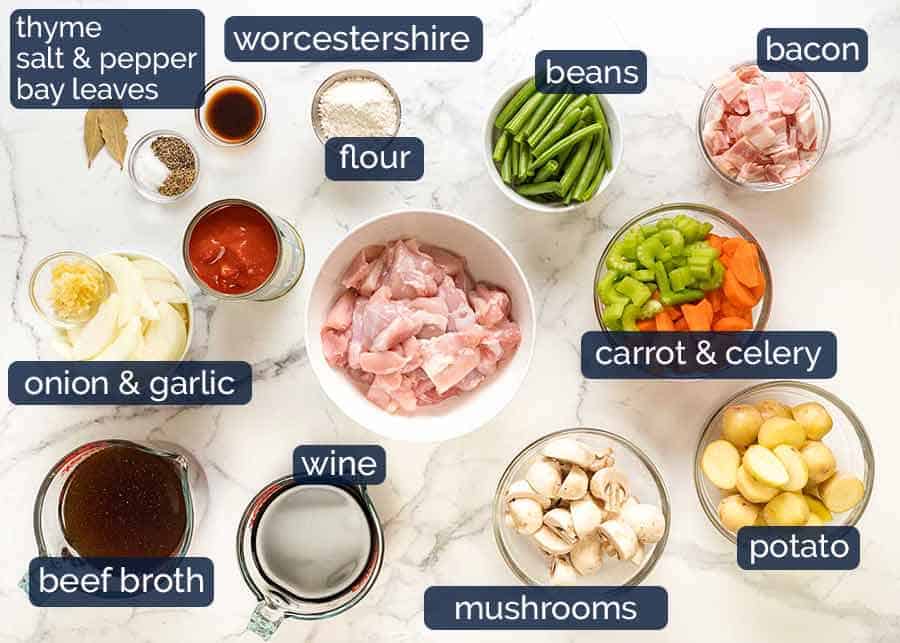 How to make Chicken Stew

Nothing tricky or unusual with this speedier Chicken Stew – we start off browning the bacon and chicken to get all those tasty brown bits on the bottom of the pan which will form part of the flavour base for the sauce.

Then cook off the veggies, add all the stew sauce ingredients, simmer for just 30 minutes until the chicken is tender, then lastly add the mushrooms and greens which don’t take long to cook. 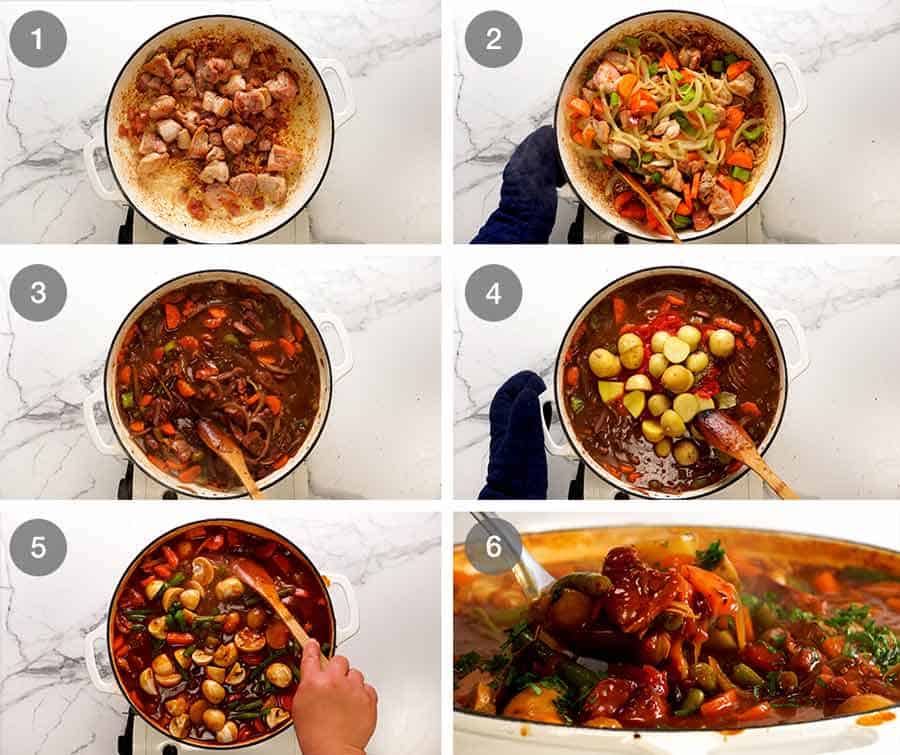 And this is what comes off the stove:

Seriously. Just tell everyone you’ve been slaving away all day. They’ll totally believe you! – Nagi x 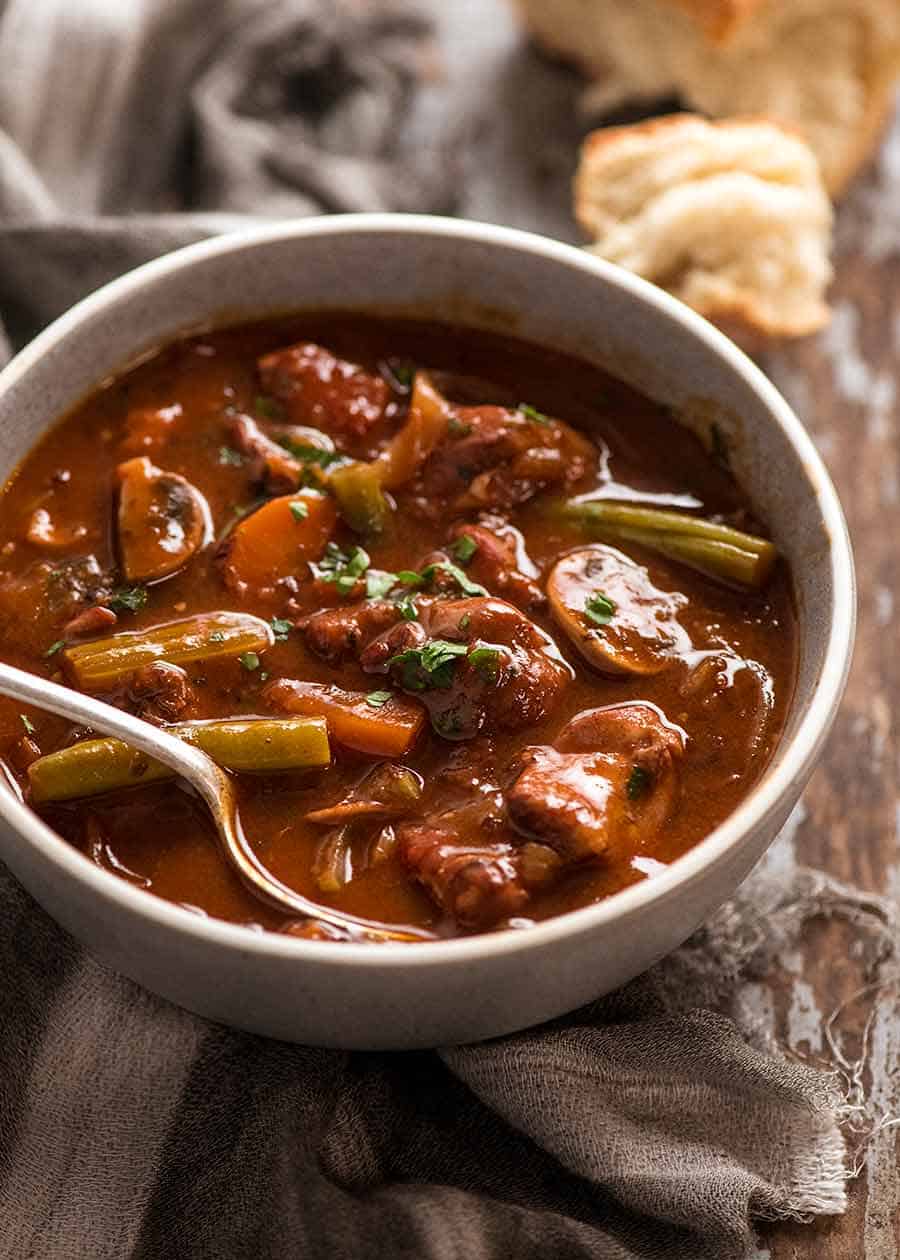 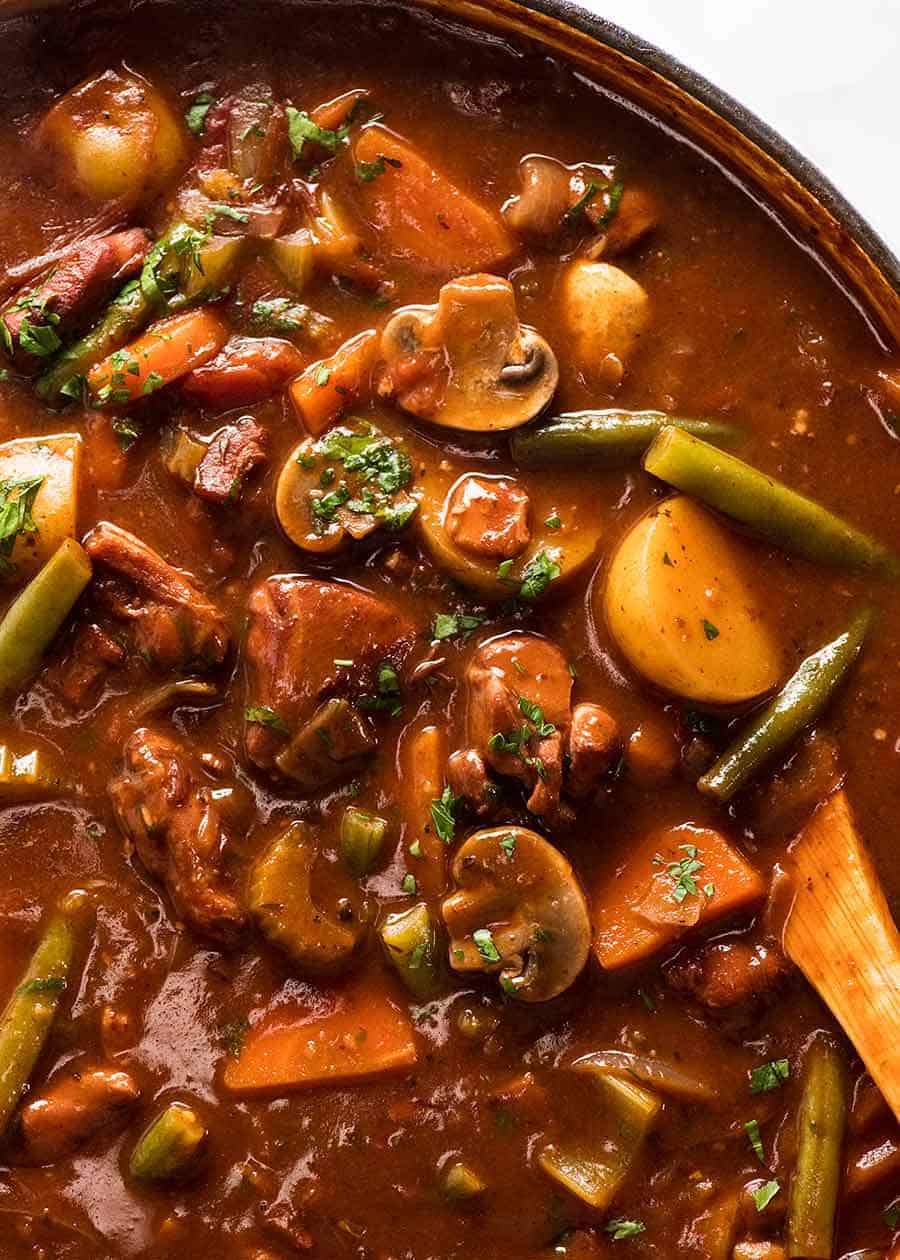 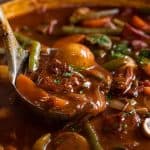 Recipe video above. This is the faster way to make a chicken stew (casserole) that’s done in an hour but tastes like it’s been simmering all day! The trick is to use boneless thigh fillets, beef instead of chicken broth, a good slug of red wine and BACON!

* Video error – I showed putting lid back on! Lid needs to stay off to thicken sauce.

1. Chicken – boneless thighs best because they stay juicy after the simmering time required for the sauce to develop beautiful flavours. I don’t recommend chicken breast, but if you have no choice (or really insist!) then don’t put the breast into the broth until the last 5 minutes or so, just to finish cooking through.

Bone-in pieces: Just add water and simmer for longer. But note my personal preference when making chicken stew with bone-in, skin-on pieces is to use this slow cooked oven Chicken Stew recipe because it makes the skin CRISP!

Guinness or Stout will also work great here too – they are dark beers, labelled as such on the cans. Use some, drink some – or tip the whole can in and simmer for longer with the lid off! If you love Irish Beef Guinness Stew, you’ll know what the Guinness does to add flavour into stews.

Non alcoholic sub – brown the bacon well first, remove. Brown the mushrooms, remove. Then brown chicken, and proceed with recipe (add bacon in once chicken browned, mushrooms at end per recipe). These multi-stage browning will create an intense “fond” on the base of the pan (ie the brown stuff) which will add great flavour into the stew sauce, making up for absence of wine.

3. Beef vs chicken broth/stock – I like to use beef here for this quick cook stew because it’s got a bit more flavour than chicken AND gives the sauce a deep brown colour (with chicken, it’s a more pale brown). But chicken is just fine to use too!