“Chicken and vegetables” sounds like some sort of boring diet food, but when you skewer them on a stick (food on a stick is always more fun) and drizzle them with the most vibrant and fresh chimichurri sauce, you’ve suddenly got a meal worth remembering. These Chimichurri Chicken Kebabs scream summer and are just waiting to be the star of your next backyard BBQ. But don’t worry, if you don’t have a grill you can just as easily make these using your oven’s broiler, like I did. 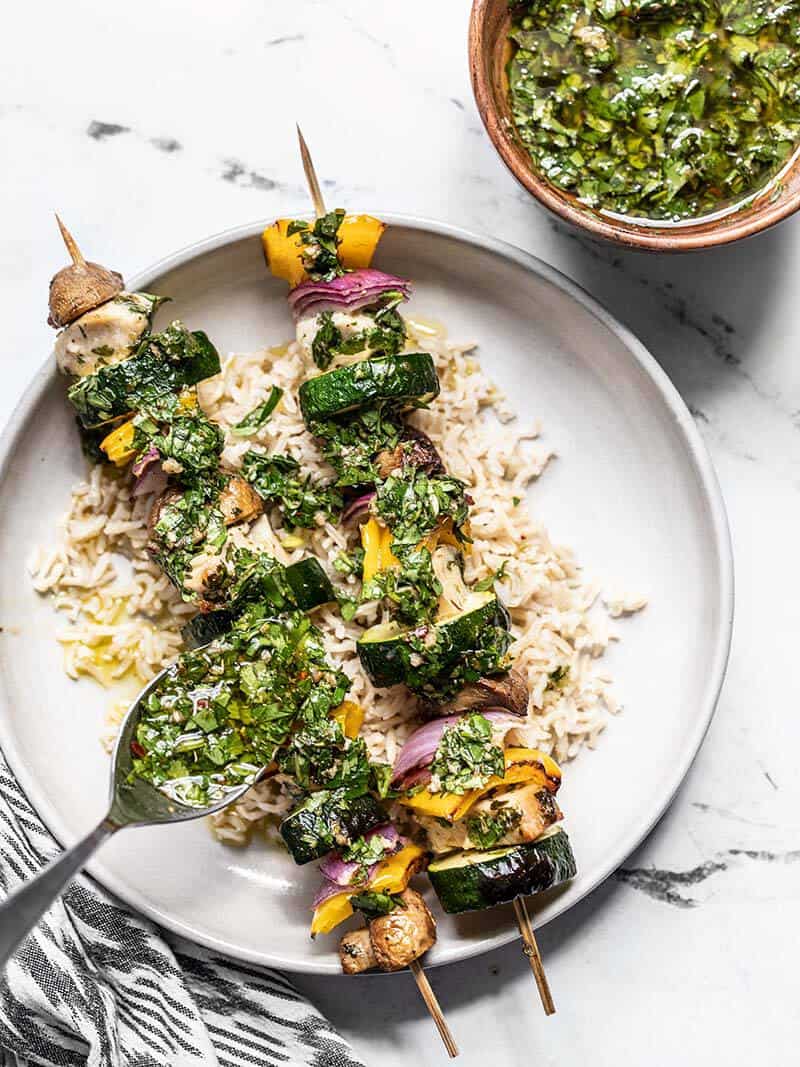 If you’ve never heard of Chimichurri, it’s an amazingly fresh and vibrant sauce hailing from Argentina. It boasts fresh parsley, garlic, olive oil, red wine vinegar, and other herbs and spices. It’s super easy to make and once you do, you’ll want to drizzle it on EVERYTHING. See my Chimichurri Sauce recipe post for more ideas on how to use this amazing sauce.

How to Cook Chimichurri Chicken Kebabs

You have a few options here. The first is to grill over an open flame. The pieces of chicken on these kebabs is quite small, so they cook through within minutes, but for extra security it’s always a good idea to use an instant read thermometer to make sure the internal temperature reaches 165ºF.

Or you can use your oven’s broiler to mimic a grill, like I have done below.

What is a Broiler?

The location of the oven’s broiler can vary, so you may need to give your oven a quick look. Many ovens have the broiler located on the ceiling of the main cooking compartment, while other ovens will have the broiler located in the drawer below the main cooking compartment. In either location, you should have the ability to adjust the rack up or down to make your food closer or further away from the heat. The closer your food is to the heat, the faster it will cook, so always check your food often when broiling to avoid burning.

Here’s a great article about Broiling from Bon Appétit about broilers and how to maximize their crispy potential, if you’d like more reading. 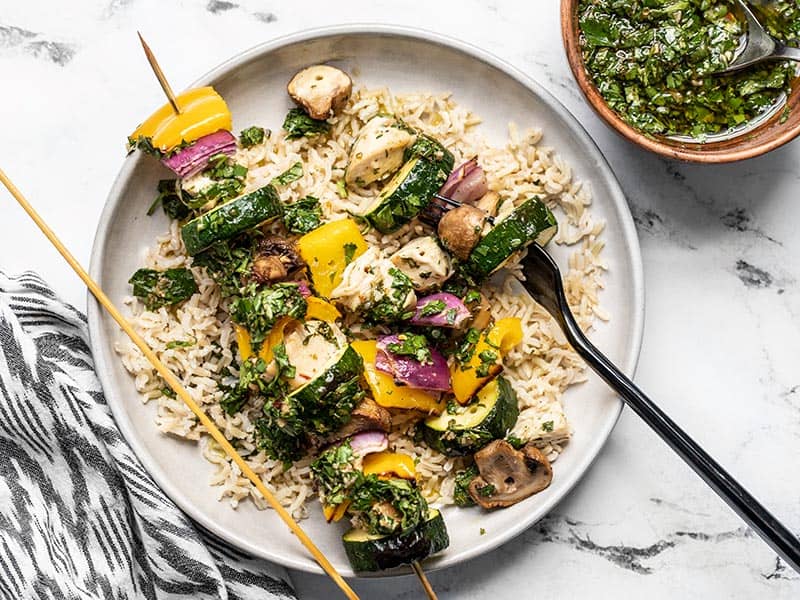 Yeah, that title is an oxymoron, I know. But you do have options to make these kebabs vegetarian. I would try adding one or two more vegetables, and marinating the mushrooms in some chimichurri, like I did the chicken. The mushrooms are like little sponges and will absorb all that awesome flavor. You can also try tofu, but I think the texture of mushrooms would be better than tofu.

Here are some other vegetables that will work great, whether you want to make these vegetarian or just switch up the vegetables to go with your chicken: yellow squash, eggplant, radish, or tomatoes. 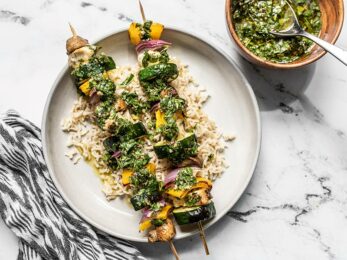 These Chimichurri Chicken Kebabs feature fresh vegetables and marinated chicken cooked over an open flame, then drizzled with a vibrant chimichurri sauce. 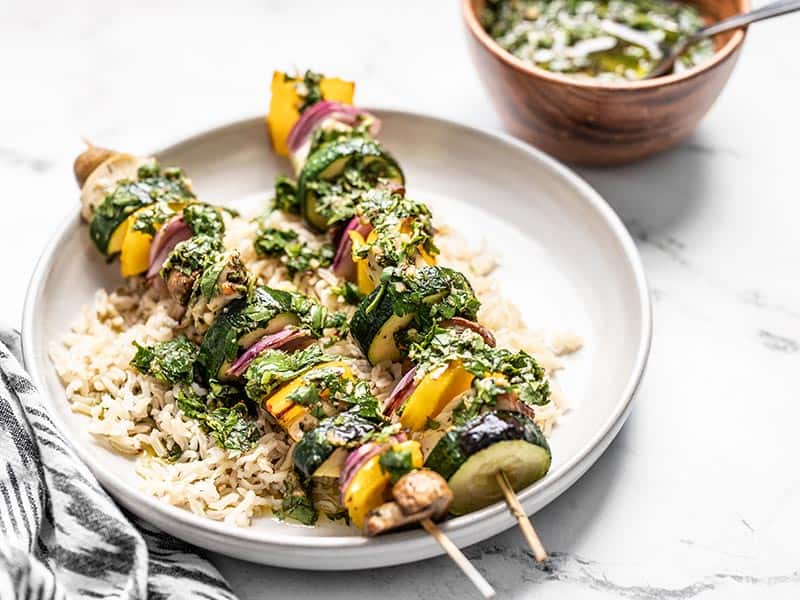 P.S. This works great as a meal prep!! 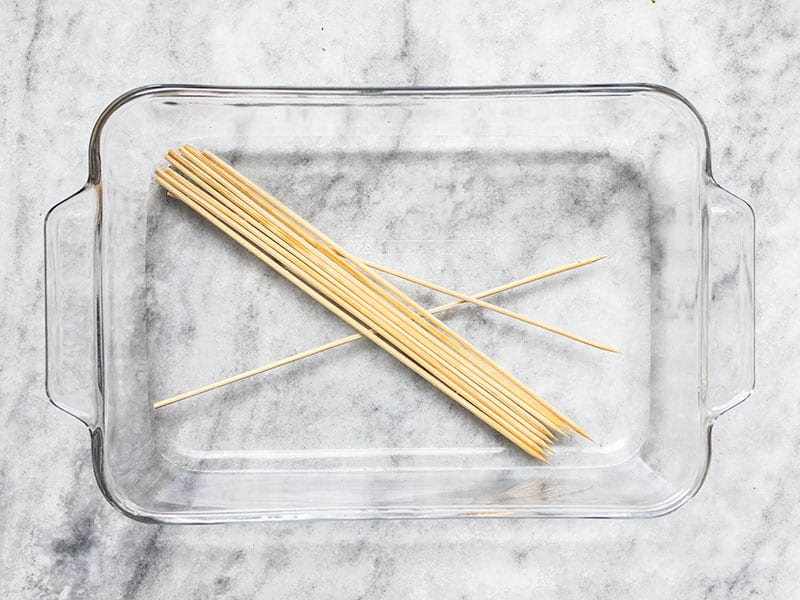 If you’re using wooden skewers, begin soaking them in a dish with 1-2 inches of water. This keeps them from burning and catching fire as the kebabs cook. 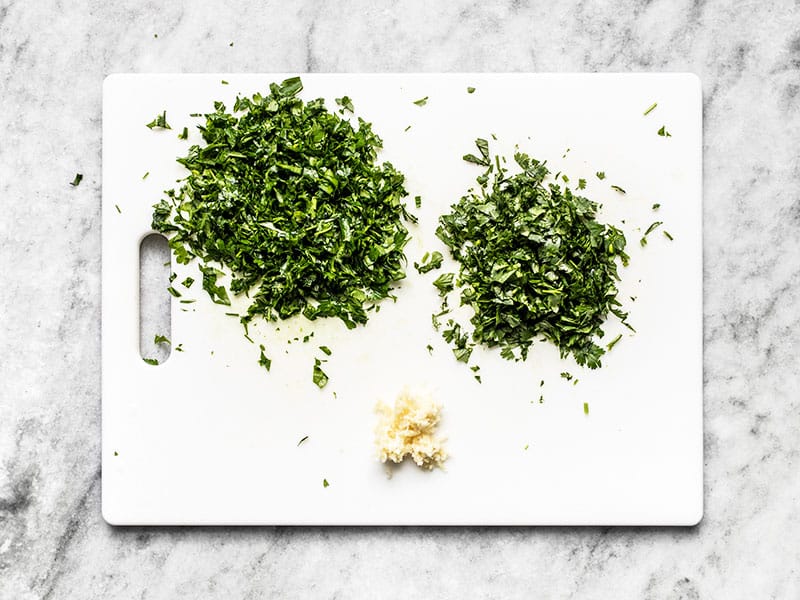 Make the chimichurri first, since it will be both a marinade for the chicken and a finishing sauce. Pull the leaves from about 1 cup of fresh parsley and 1/2 cup of fresh cilantro. Chop them finely. Mince three cloves of garlic. 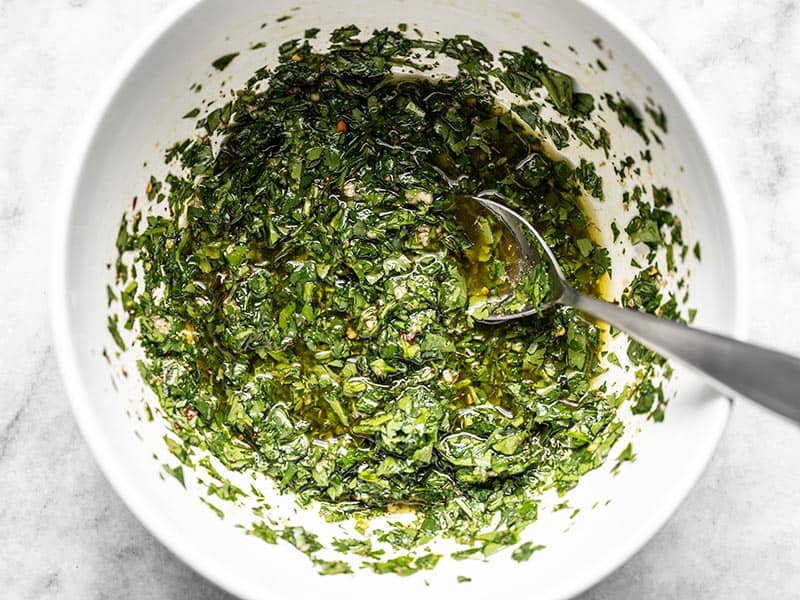 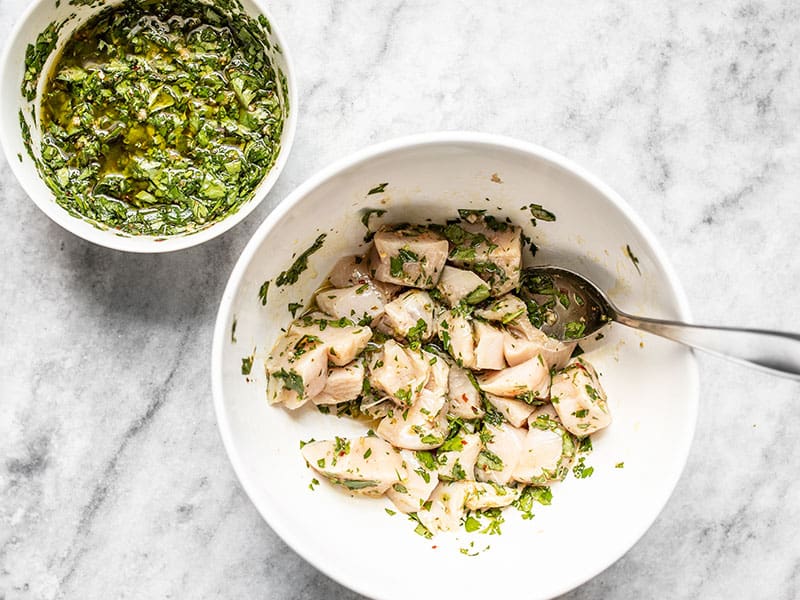 Cut one boneless, skinless chicken breast (about 3/4 to 1 lb.) into one-inch chunks. Place the cubed chicken in a bowl and add 2 spoonfuls of the prepared chimichurri. Save the rest of the chimichurri for later. Stir the chicken to coat in the chimichurri. 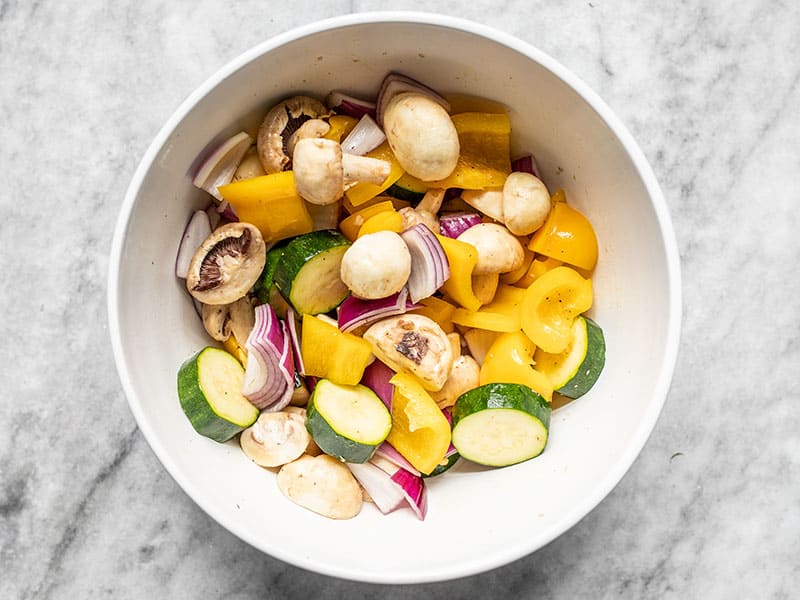 Chop one bell pepper, one red onion, one zucchini, and 8oz. button mushrooms into 1-inch pieces. Place them in a bowl, add 2 Tbsp olive oil, a pinch of salt and pepper, then toss until the vegetables are well coated in oil.

Adjust your oven’s rack so that the baking sheet or broiler pan you’ll be using is about 5 inches under the broiler. This was the second level down from the top for me. If I were to put it closer the kebabs would cook a little too fast for my liking and give me a little less control. When they’re still close enough to brown but not at lightning speed, I feel like I have more control. 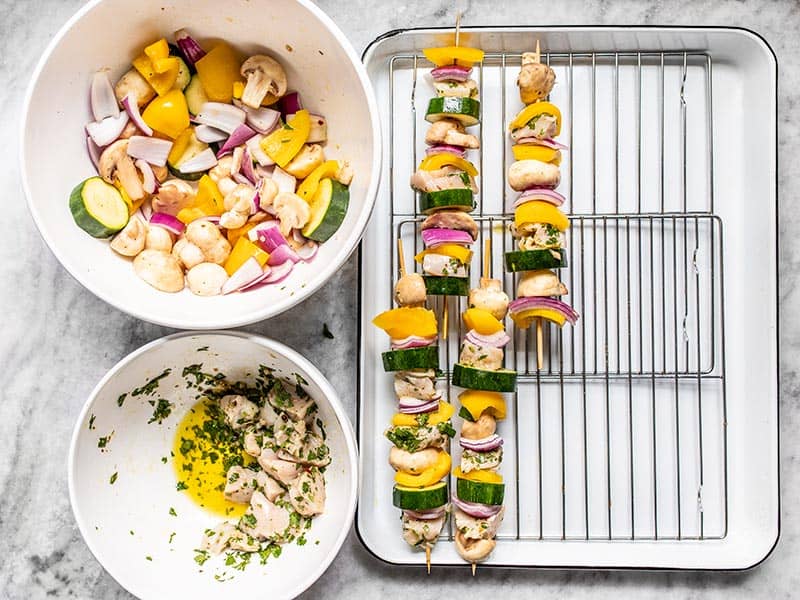 Place a couple wire cooling racks over a baking sheet or use a broiler pan to allow the kebabs to drain as they broil. Begin to build your chicken kebabs by alternating vegetable and chicken pieces until the skewers are full. 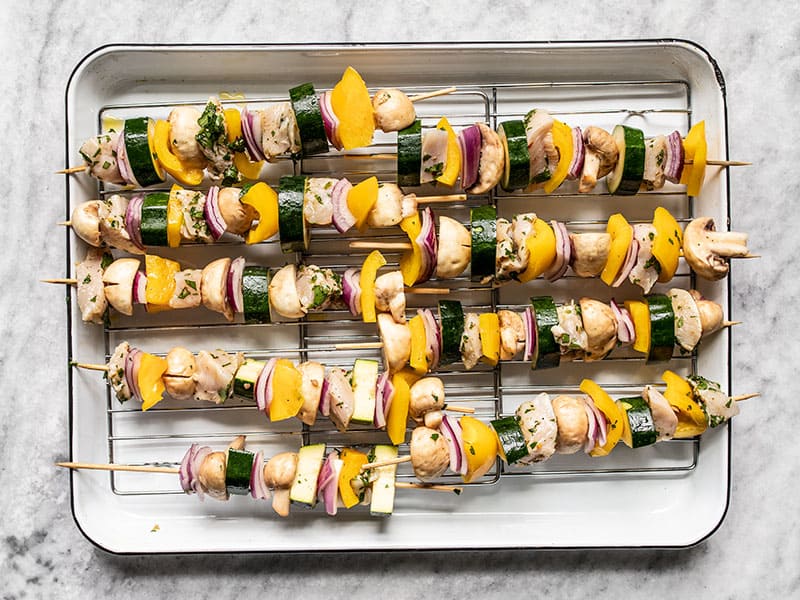 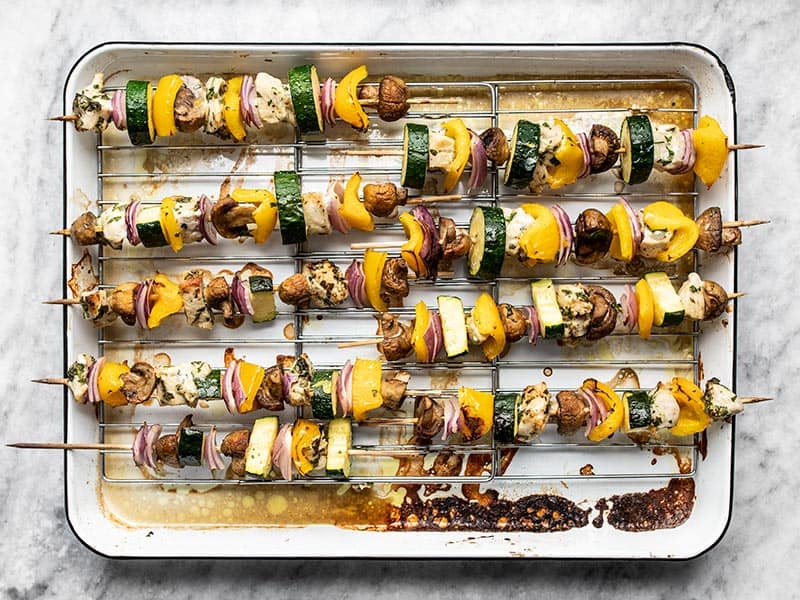 See how the juices were able to drain away from the kebabs? This allows them to really brown instead of stewing in their own juices. 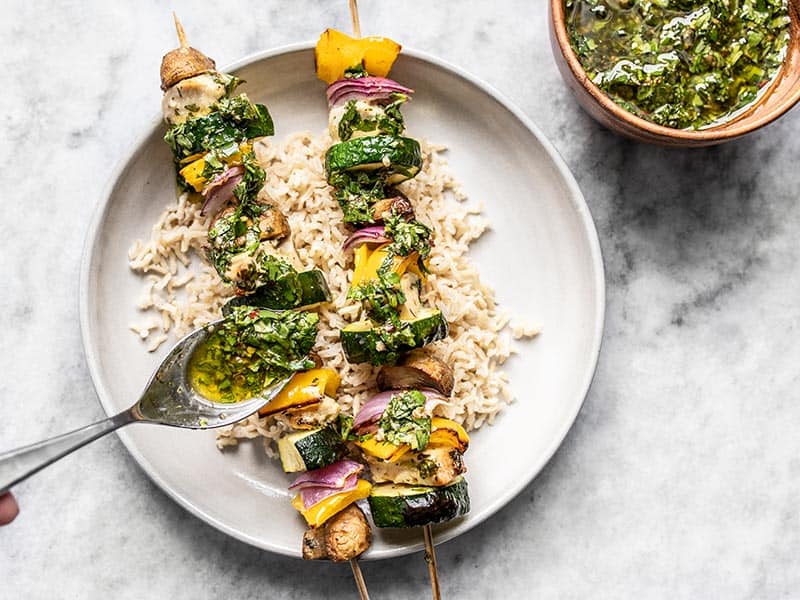 To serve the chimichurri chicken kebabs, place them over a bed of rice and drizzle with a couple more spoonfuls of the fresh chimichurri. I highly suggest rice because it will soak up any flavorful runoff of chimichurri! 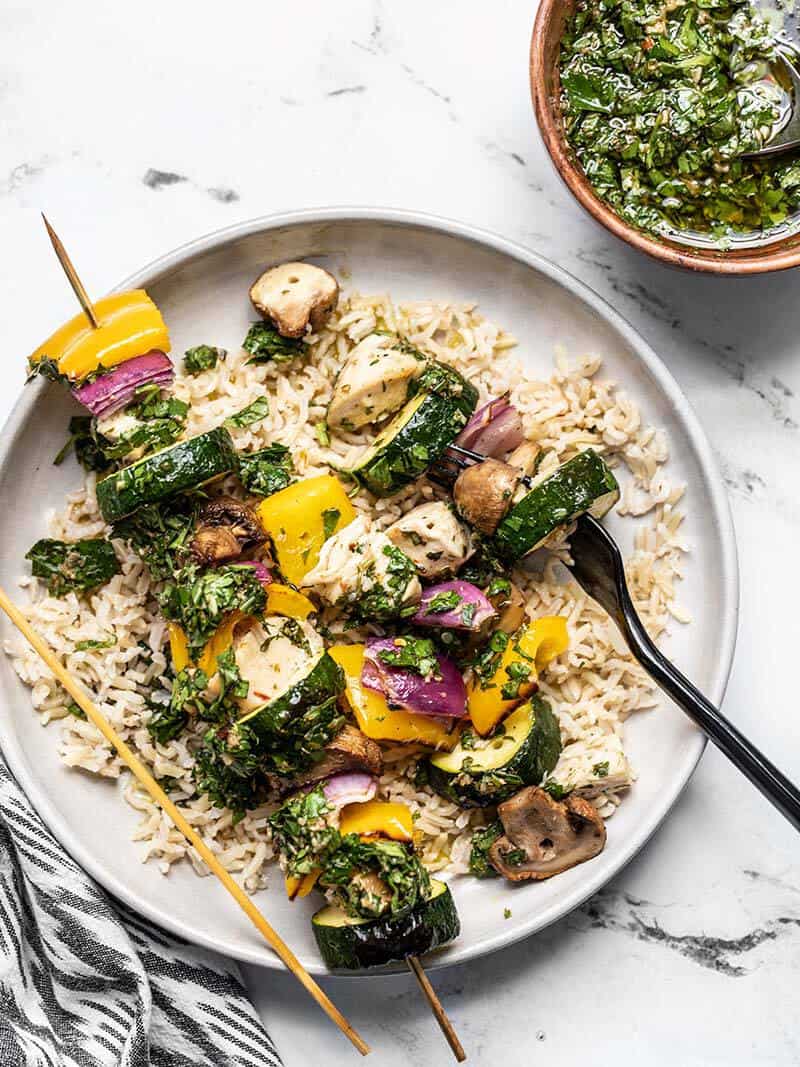 Slide your chicken and vegetables off the skewer and enjoy!