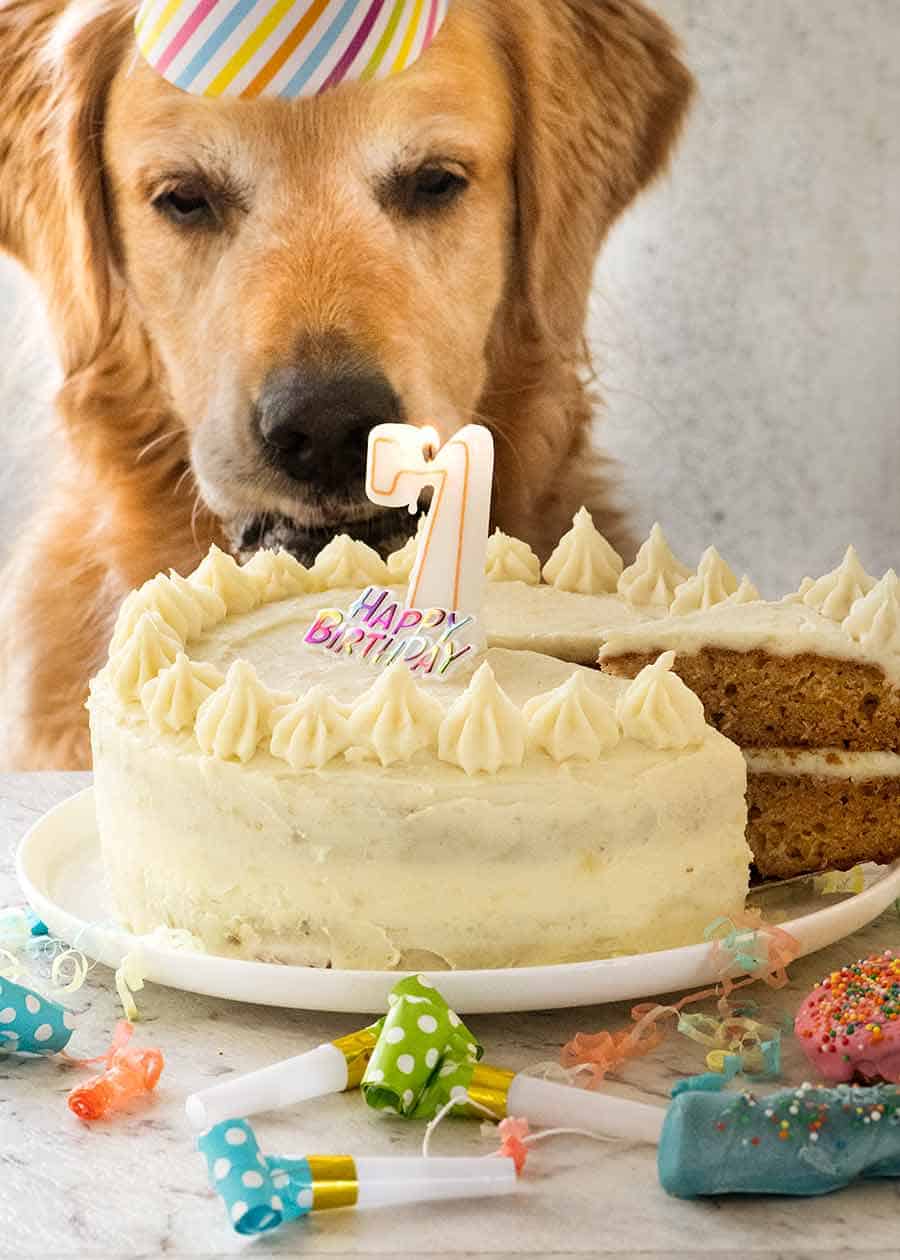 A dog cake recipe to celebrate Dozer’s birthday!! A layer cake frosted with fluffy “buttercream”  ….. but it’s made with wholesome pooch friendly ingredients!

Aren’t you just dying to know how I made that frosting??

“That frosting tastes a bit odd,” grumbled the husband of Dozer’s boarder. Can you just imagine the pleasure she got out of telling him he’d just eaten a DOG cake??

“Serves him right for helping himself to anything that looks tasty” she smirked when she told me. I was laughing so hard at the vision, I actually snorted.

Who can blame him?? The whole point of creating this cake was to make it look like a real birthday cake piled high with fluffy buttercream frosting – but with dog friendly ingredients. 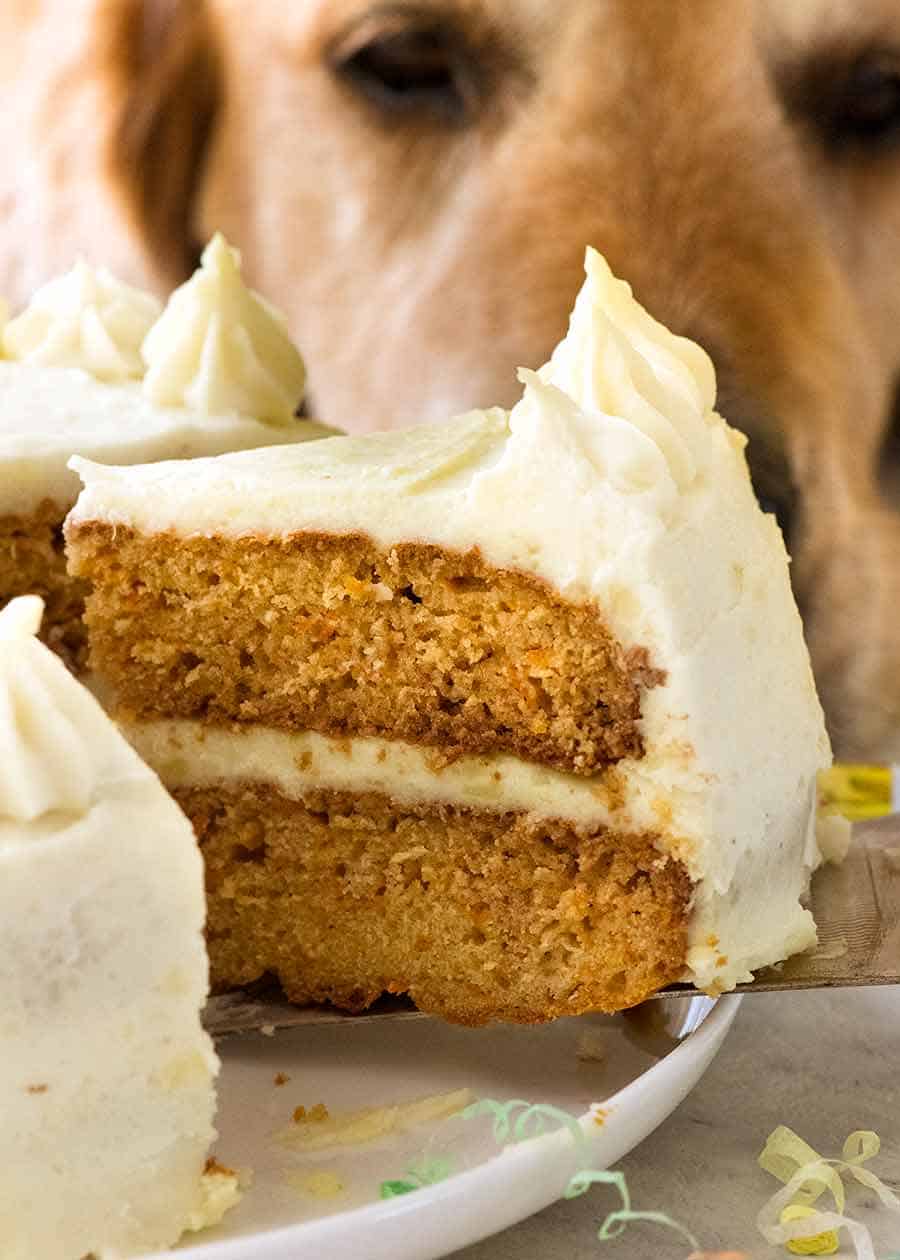 OK OK I know you’re busting to know how I made the cake look so “real” so I won’t keep you in suspense any longer! Here’s the rundown:

This is a healthy dog friendly version of carrot cake. It’s a moist sponge that’s very simple to make – dump and mix job – and all the ingredients are either good for dogs, or fine for dogs to eat in moderation. I’ve provided some nutrition commentary on each ingredient in the recipe below.

(PS I hope you didn’t miss that I said this is a moist sponge. Just because it’s a dog cake, doesn’t mean we should let our standards slip! 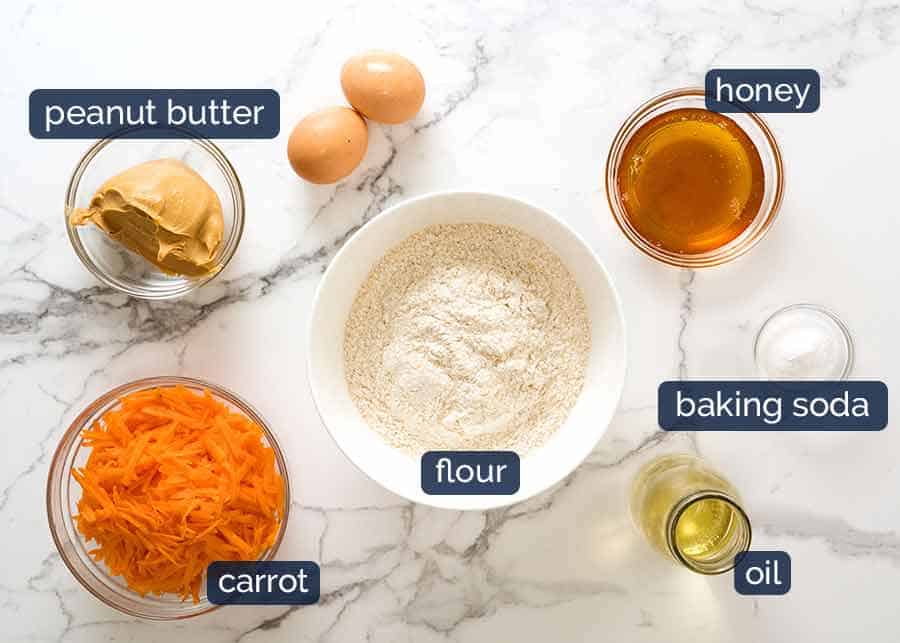 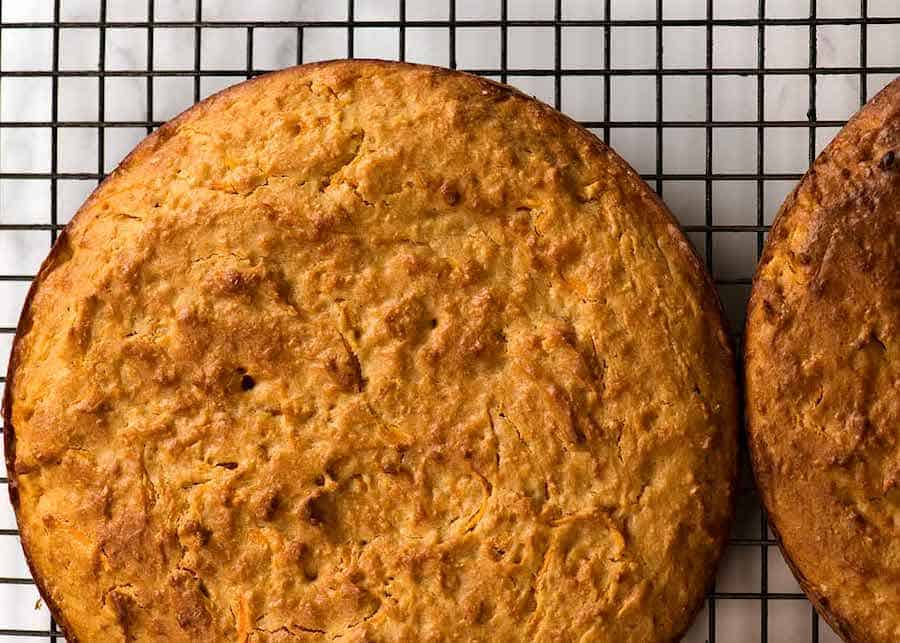 Made with fluffy whipped mashed potato! OK, so it’s not something you’d put on a cake for humans – but this is for dogs remember!

I wanted a frosting that was dog friendly that looked just like vanilla buttercream so I could use it for sandwiching layers, frosting and piping. Most dog cake frosting recipes I found use yogurt and peanut butter which is too soft and also, too much of either of those ingredients is not good for dogs.

I got the idea from Meatloaf Cupcakes that I shared years ago where I piped on mashed potato swirls.

I use yogurt to give it a creamy soft “buttercream frosting” consistency because yogurt has probiotics in it which is good for dogs. But water works just as well! 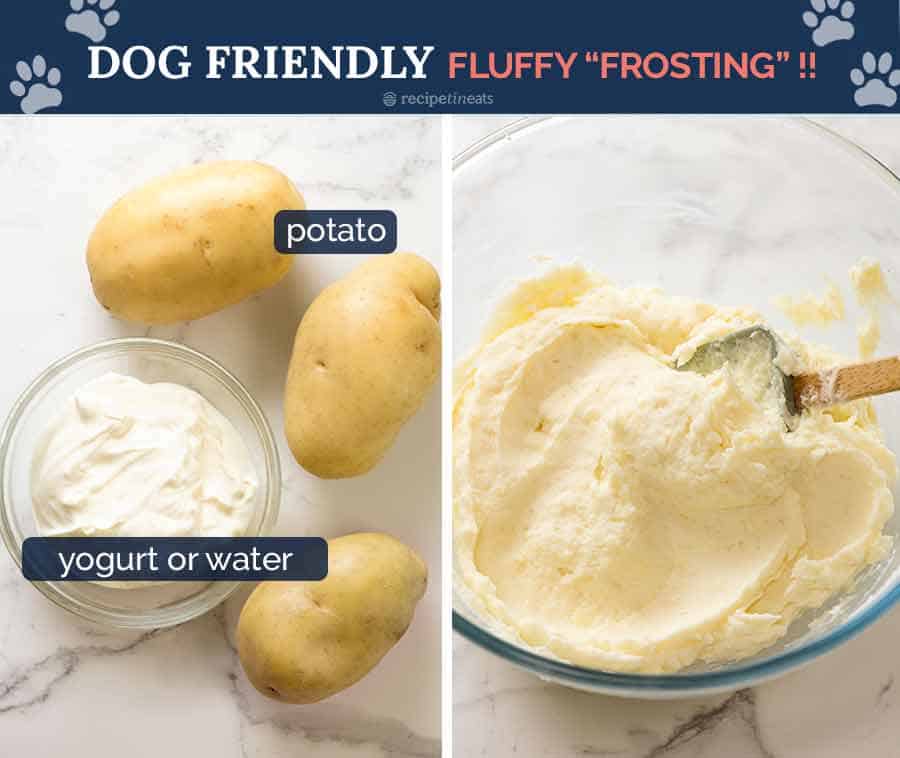 Look how well it works as frosting for the cake! It’s looks almost impossibly similar to real buttercream frosting! 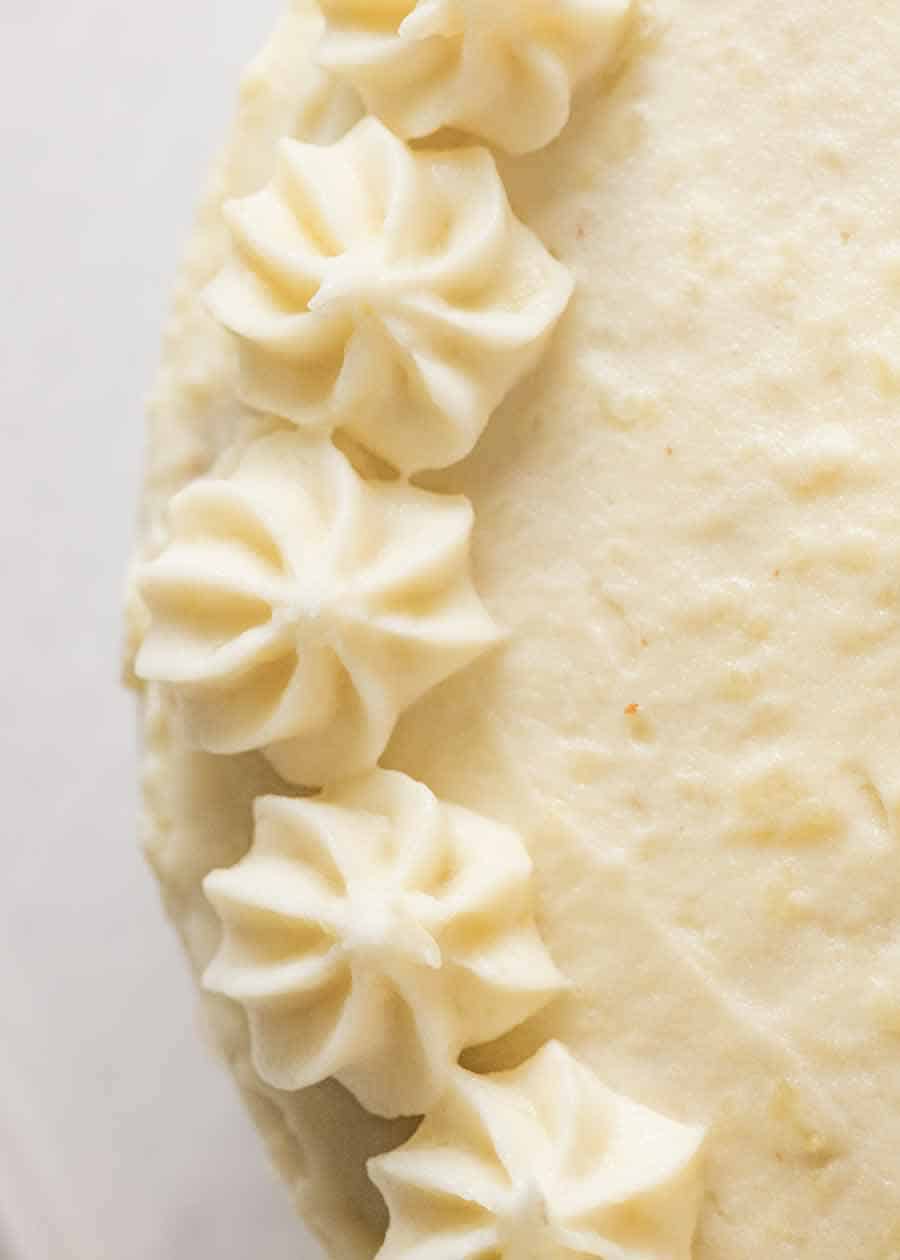 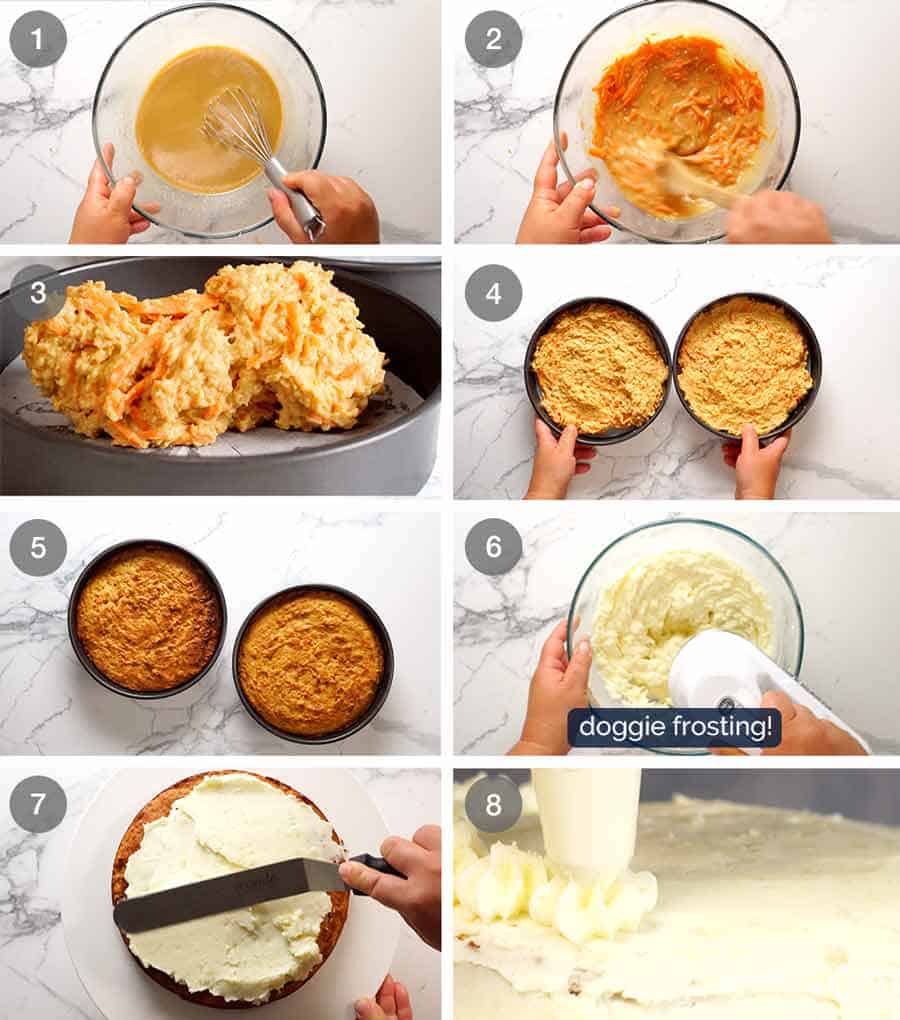 A cake this good (and big

) is made to be shared. And what better way to share it than at an impromptu birthday party down at the beach??

It was, as one might expect, total chaos, and my vision of an adorable photo of all the dogs wearing party hats sitting patiently behind the cake just didn’t happen. (That was total wishful thinking on my part 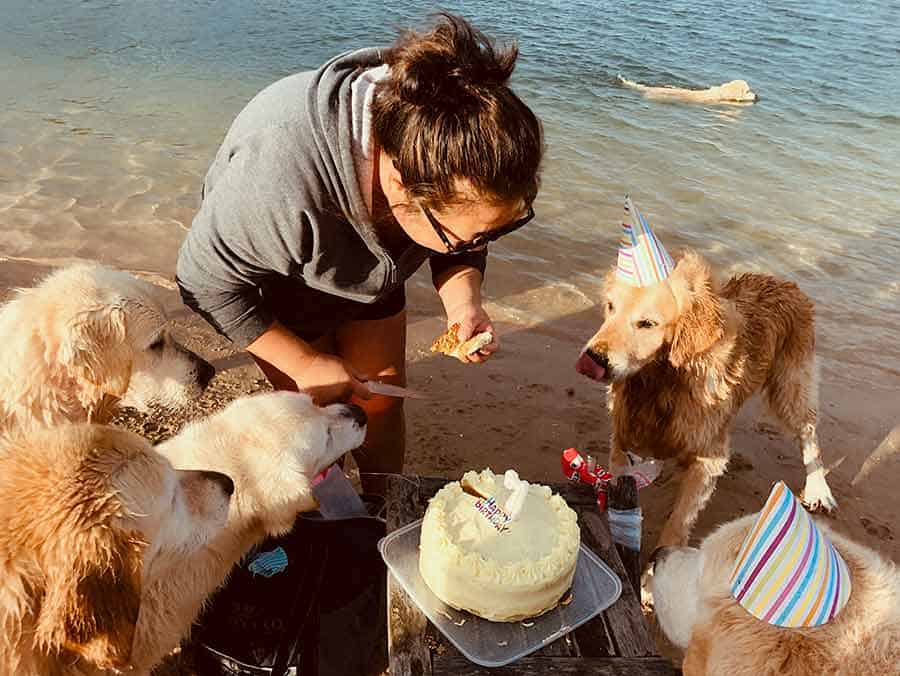 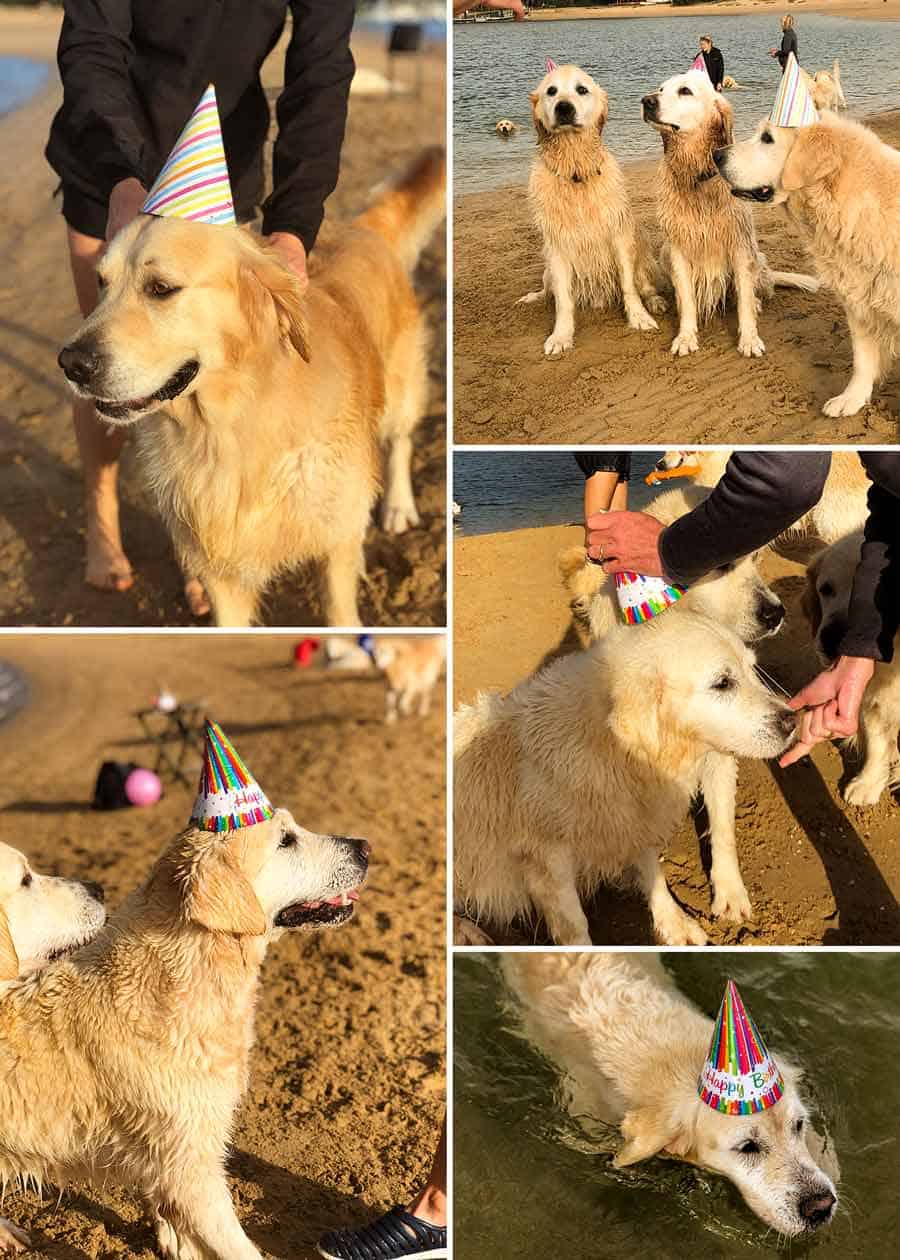 , the swarm of wet, sandy golden retrievers around the cake was such a hazard at one point I actually had to pick the cake up and run away! 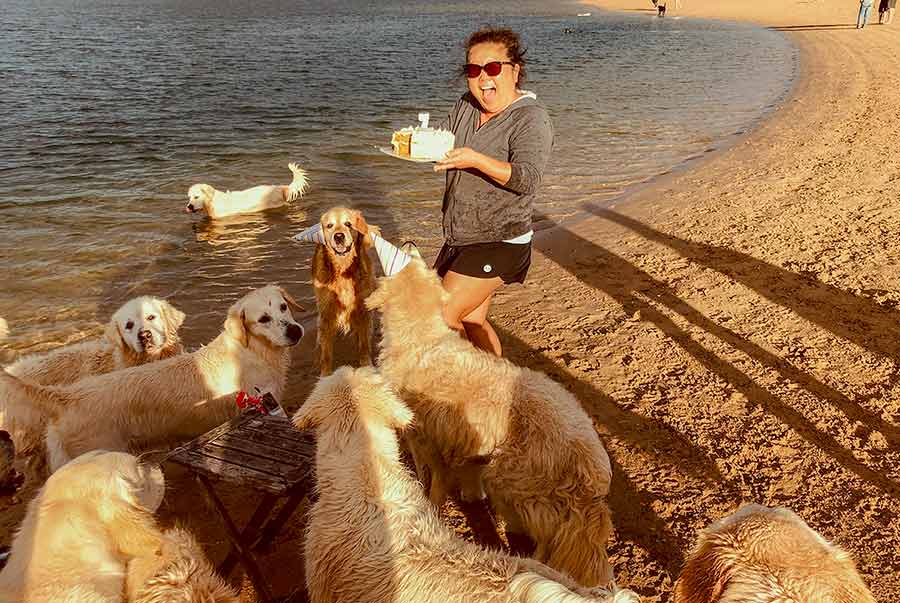 As for the birthday boy, the cheeky bugger tried to get stuck into the cake before it was even served!! 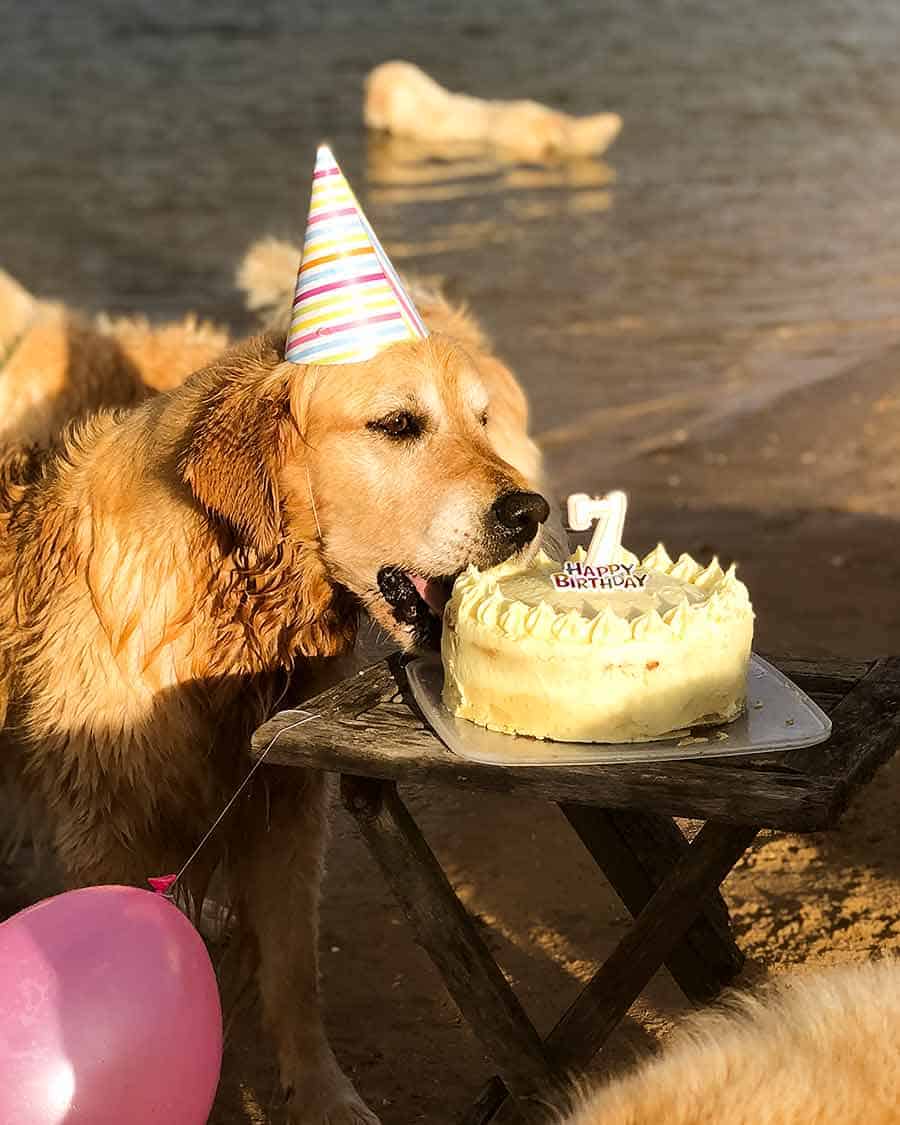 But suffice to say, it was his idea of a perfect birthday. Beach, all his best mates, a big fat cake. What more can a dog ask for??

Actually, the only thing different between this day and every other day in Dozer’s life was the presence of cake.

Another year older, though not wiser. But I wouldn’t change a thing about you – I love you just the way you are! ~ Nagi x 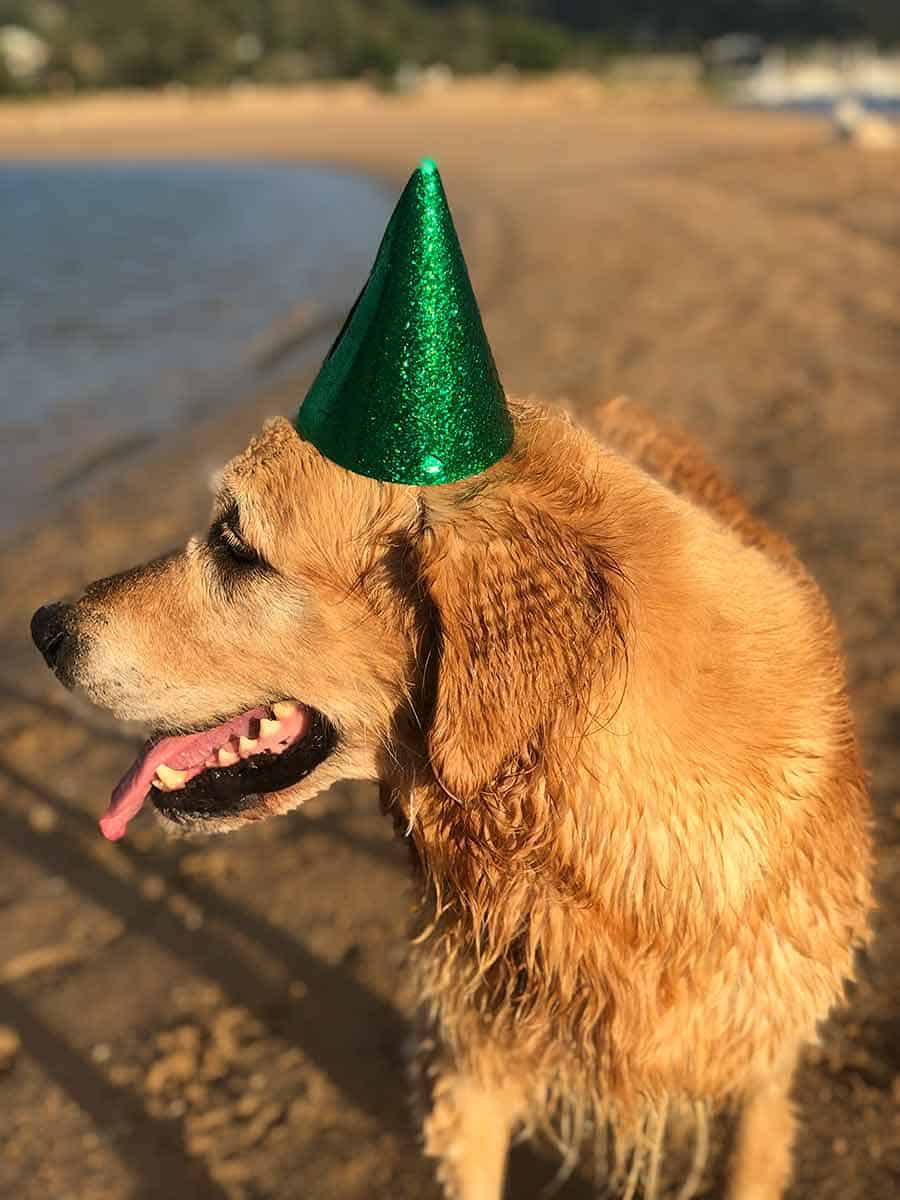 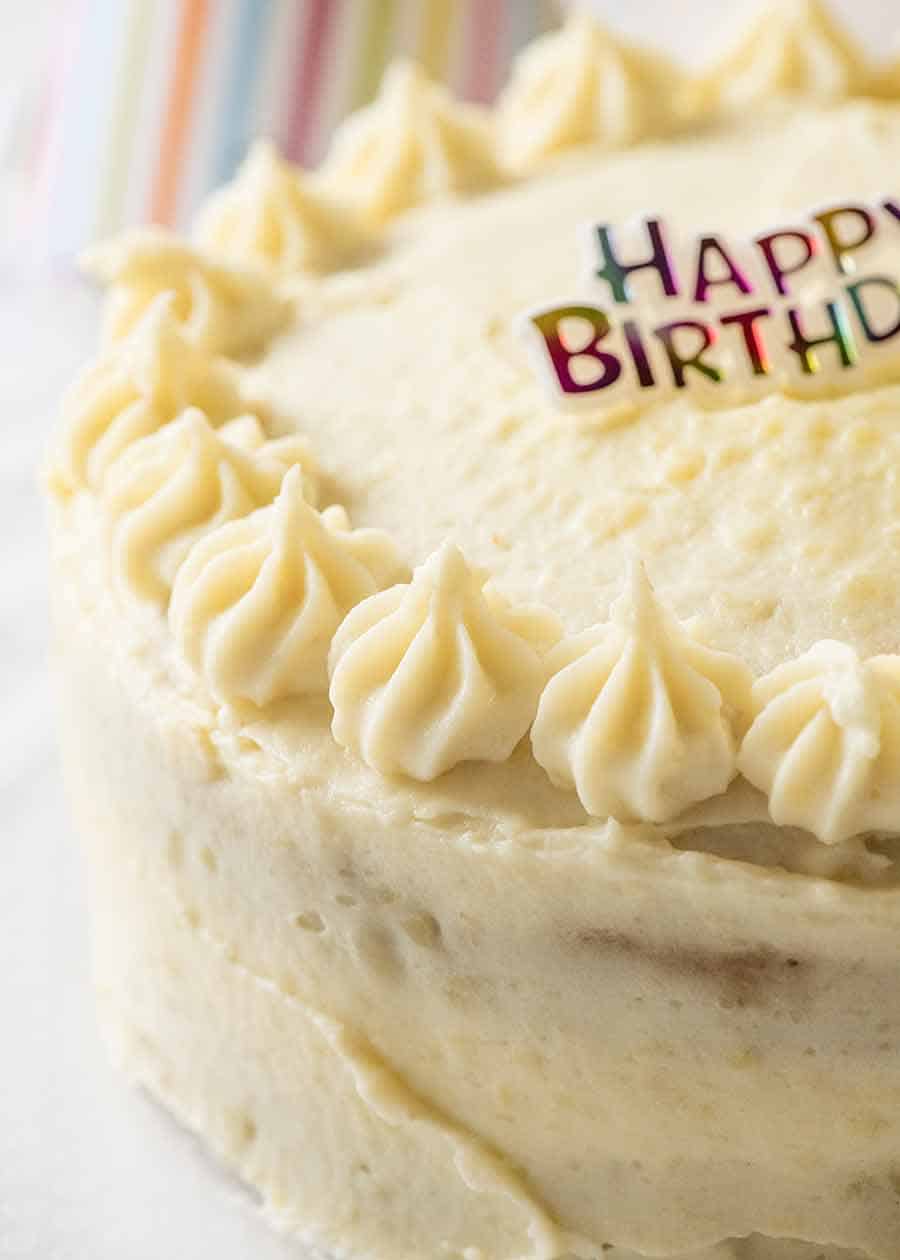 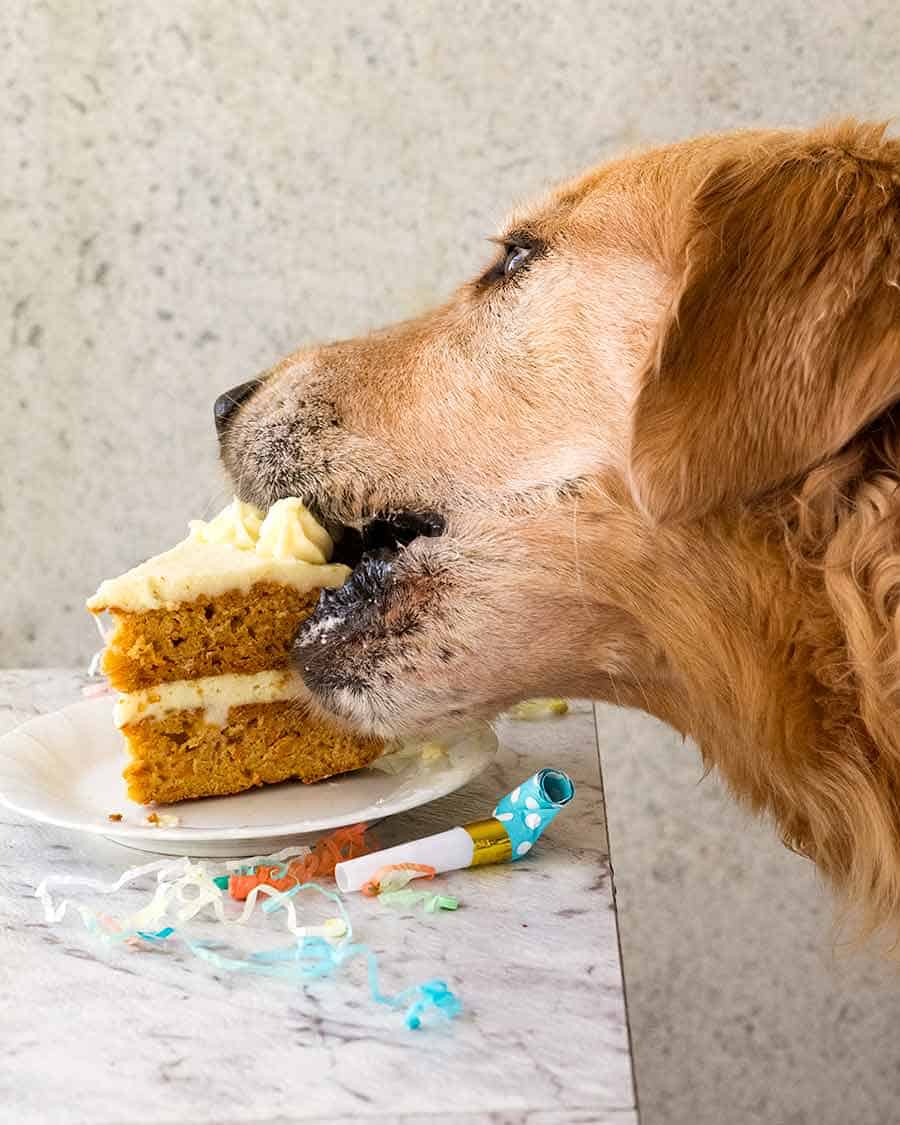 Shooting with Dozer IN the video was somewhat of a challenge…… if he had his way, he’d have eaten the batter raw!! 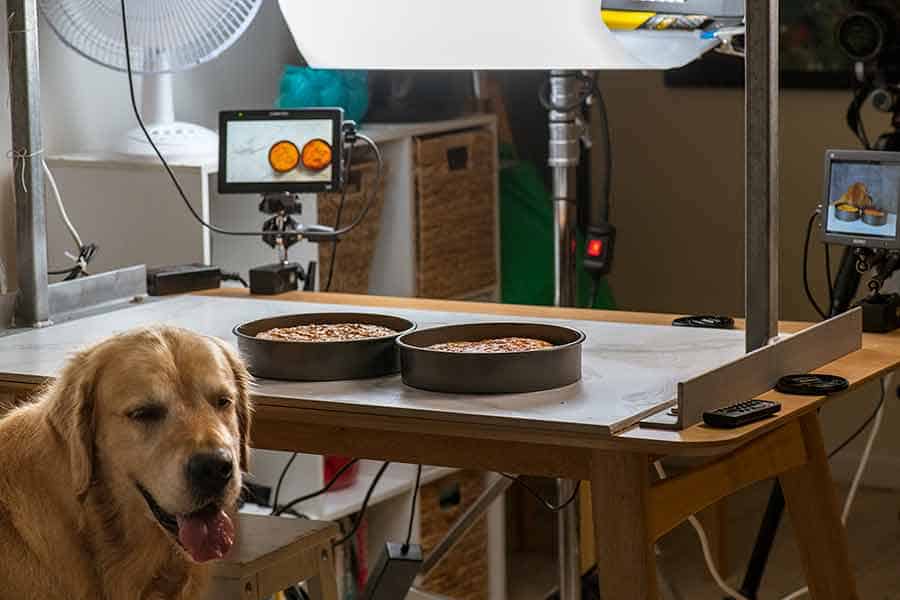 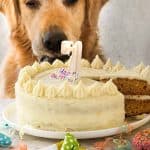 Recipe video above. A dog cake with “frosting” that looks so impossibly real, it’s been mistakenly eaten by unsuspecting people on many occasions! Made with dog friendly ingredients with an irresistible peanut butter smell. Fine for humans to consume – but it’s a bit odd tasting for our palette!

2. Serving size – Appropriate serving size should be determined having regard to the health, size, activeness and digestive sensitivities of your dog. Dozer was fine even eating a very large slice (almost 1/8th of the cake!). But he is a highly active dog  and has a broad diet, he eats many things I make and tastes almost everything I eat myself!

Do not use in place of a meal – just like with human cakes, dog cakes are not a well rounded nutritious meal!