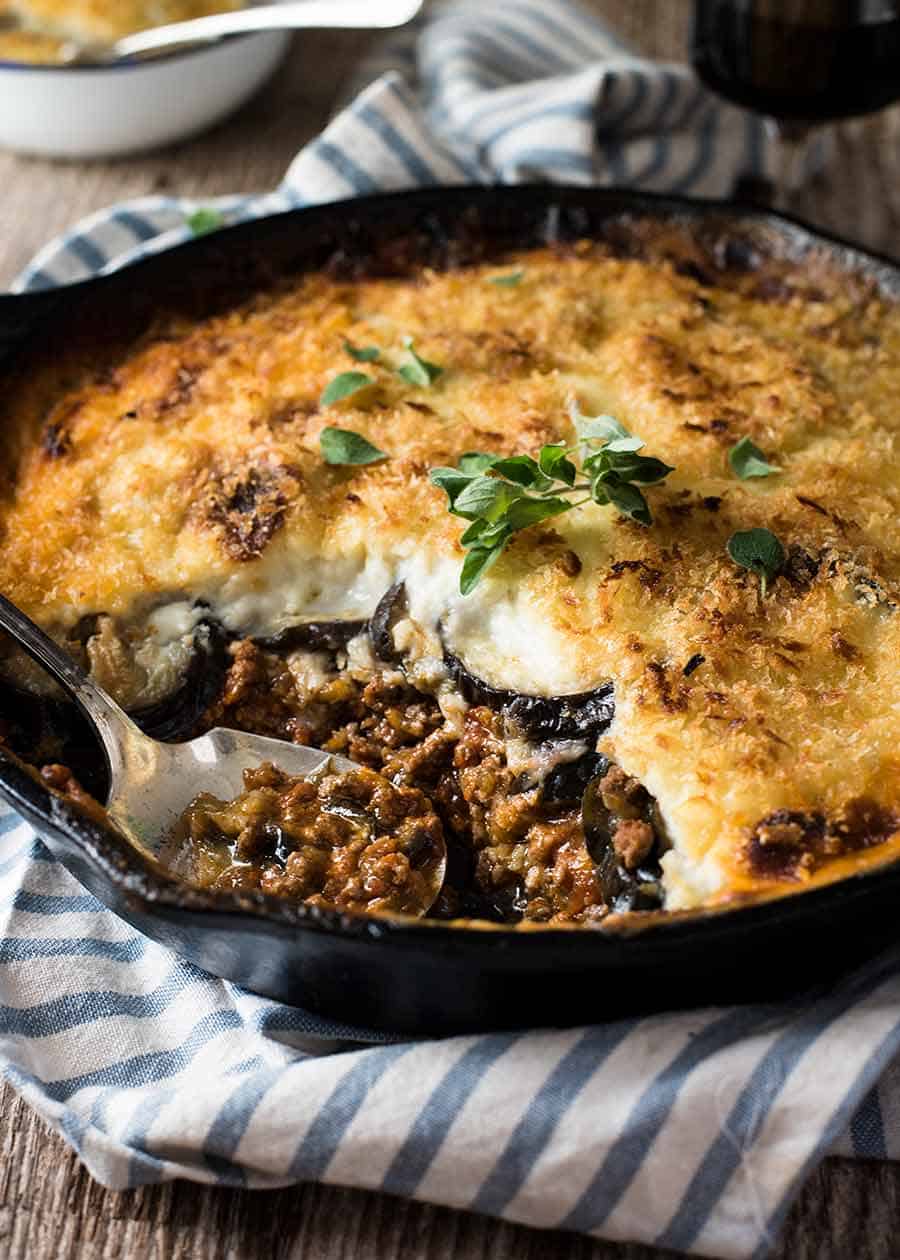 Moussaka is to the Greek what Lasagna is to Italians. A rich tomato meat sauce layered with eggplant instead of pasta sheets, and topped with a thick layer of béchamel sauce, this traditional Greek recipe takes time to assemble – but it’s well worth the effort.

This is serious comfort food – a low carb one!

As with all iconic dishes of the world, I imagine that every Greek family surely has their own version of Moussaka.

Well, I like to think they do. I have visions of Greek Mamas having heated debates about what makes a great moussaka, arguing over earth shattering things like:

Well, Greek Mamas might not have such a pragramtic view as the answers I’ve provided, but hopefully this recipe gets their nod of approval! It’s a traditional recipe sourced from a Greek cookbook called The Food And Cooking Of Greece which I found at my local library back in 2015.

Since this time, it has evolved a wee bit pursuant to other Greek cookbooks that have crossed my path, but the core of the recipe is still very much the original recipe. 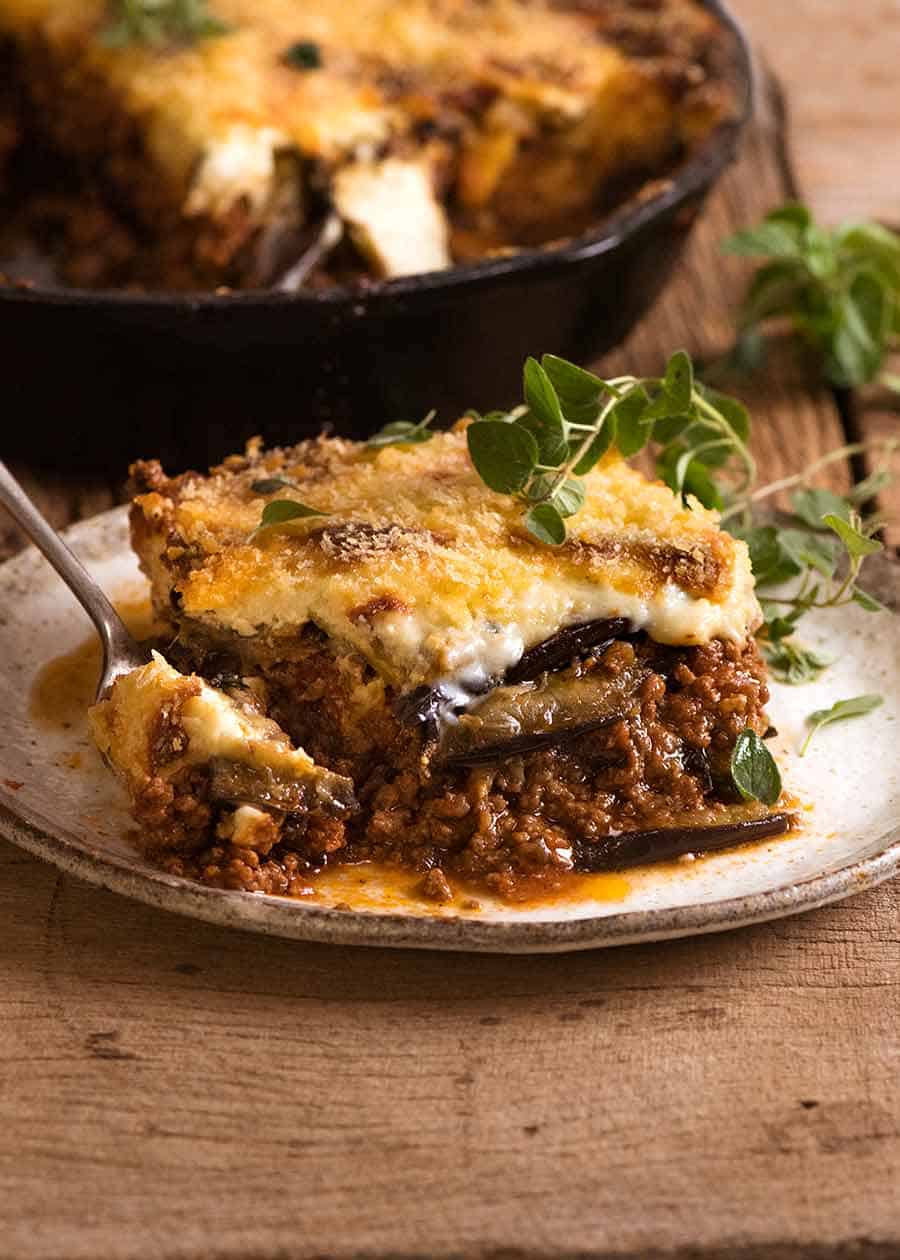 How to make Moussaka

Here’s a quick look at each of these components – or if you prefer, watch the recipe video below or skip straight to the recipe!

Traditionally, the eggplant slices are fried but there’s plenty of recipes (even from Greek cookbooks) that grill/broil, bake or BBQ the eggplant.

I’ve opted to bake here, but actually, the fastest and easiest way to cook the eggplant is on the BBQ. There’s a vast volume of eggplant here and it takes 3 trays. If you’ve got a 4 burner BBQ, you’ll get these thin slices of eggplant cooked within 5 minutes (and no salting required).

Why salt the eggplant? Two reasons: to extract excess liquid (otherwise you end up with watery moussaka) and to remove any potential for bitterness (high heat of BBQ will avoid the need for this). 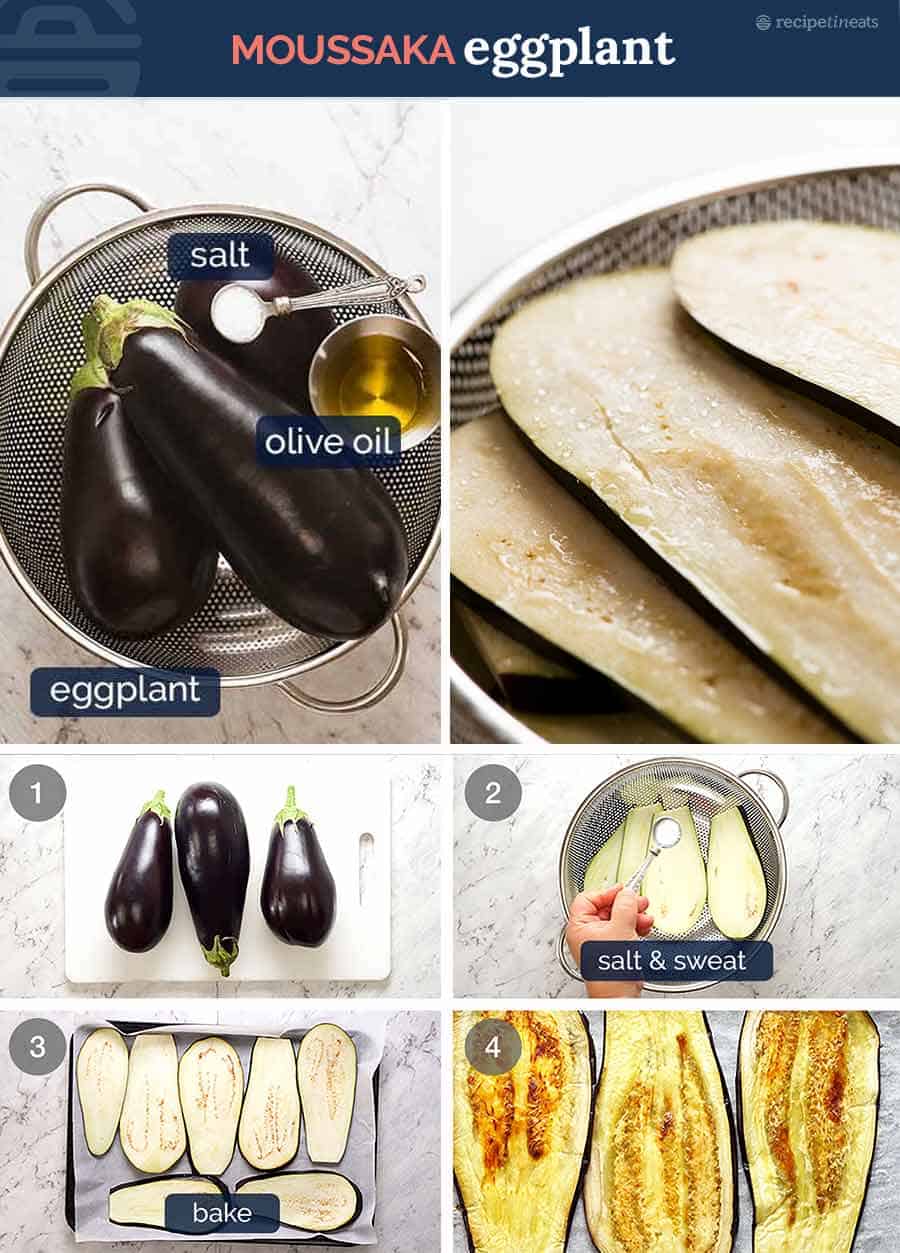 The meat sauce for Moussaka is traditionally made with lamb but it’s equally delicious with beef. I love the subtle hint of cinnamon and oregano in this – a nice reminder that it’s not to be confused with everybody’s favourite Bolognese!

But other than that, the cook method and ingredients in the Moussaka meat sauce is very much the same as Bolognese! 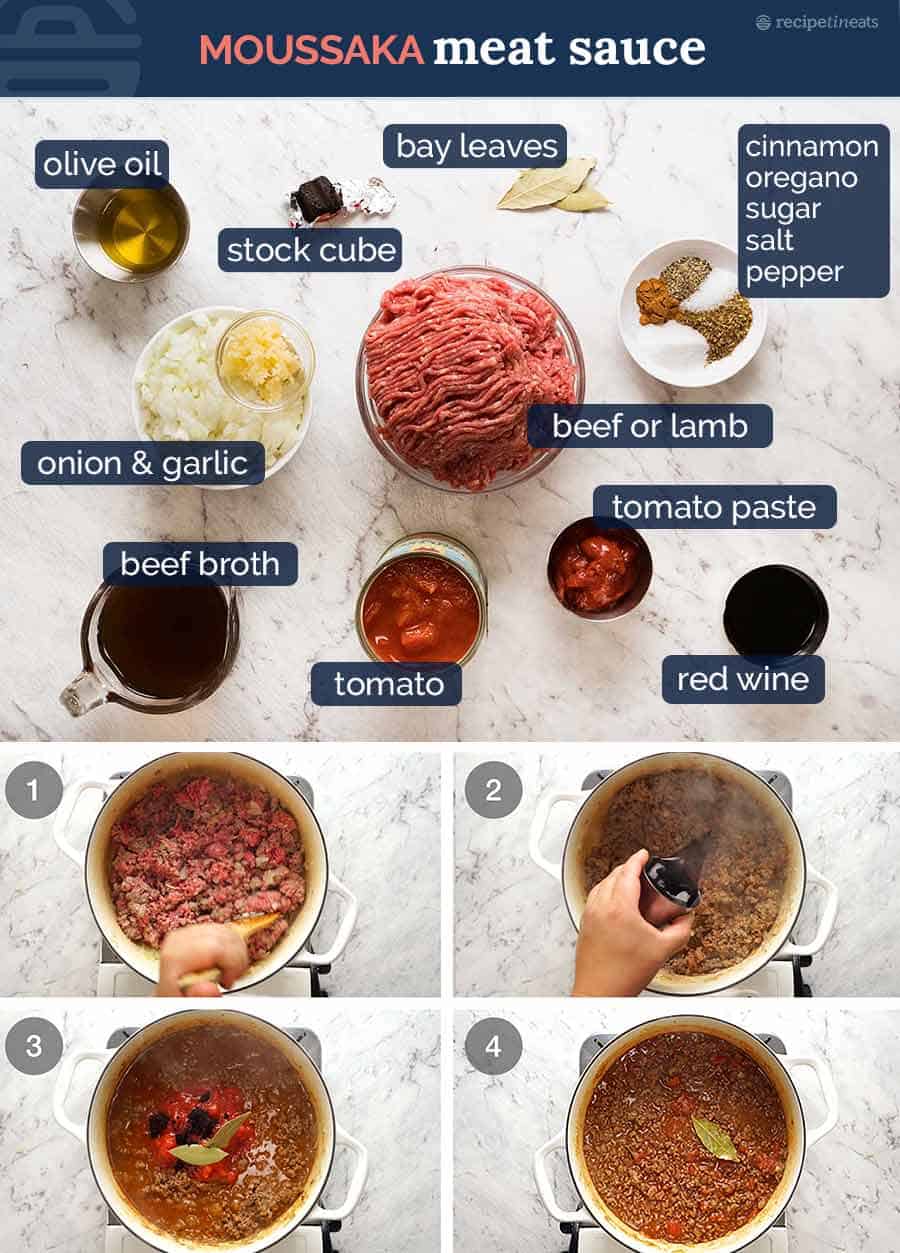 Oh wait – one big difference between Moussaka meat sauce and Bolognese – this is much thicker. Like with Cottage Pie and Shepherd’s Pie. It needs to be, because otherwise it just runs everywhere when you cut into it. 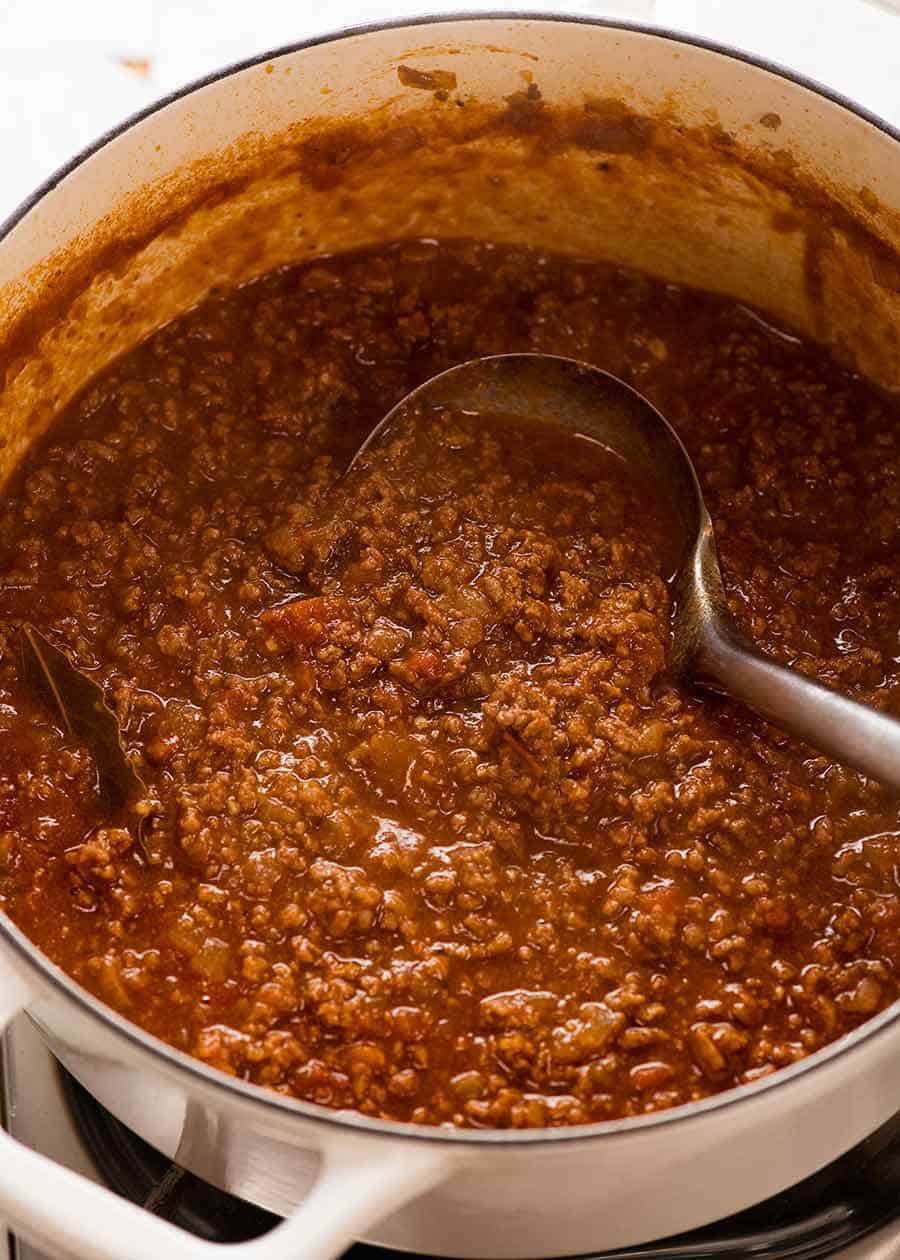 This is not your everyday Béchamel sauce! Not like what we see in Lasagna and gratin dishes like this seafood pasta Gratin.

It’s made with eggs (which is not in usual Béchamel sauces) so it sets when it bakes. A necessity because Moussaka has a nice big thick layer of Béchamel Sauce, far thicker than I use in Lasagna. If it wasn’t set, it would just run everywhere! 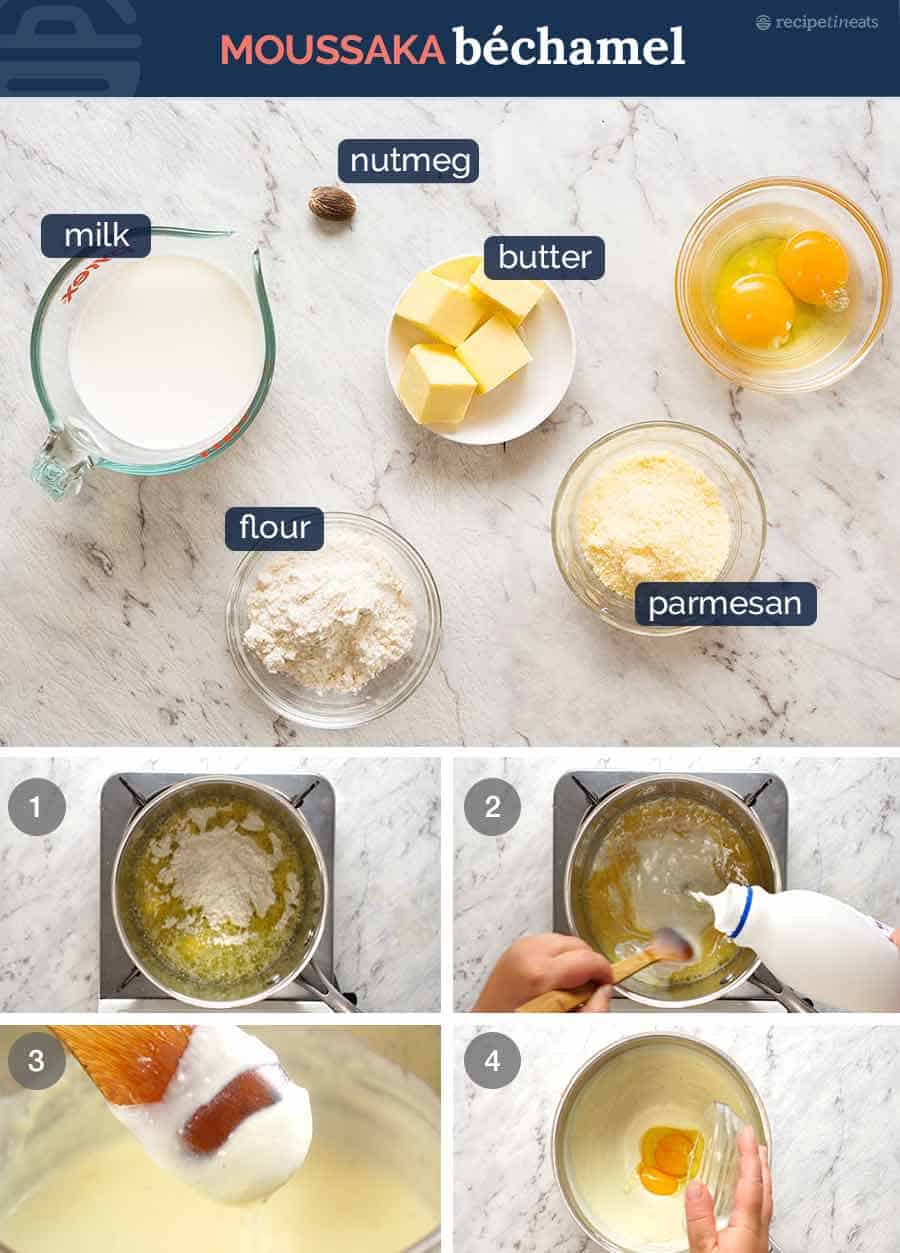 The step photos below are pretty self explanatory I think! It’s no different to layering up a lasagna except we use eggplant in place of pasta sheets. 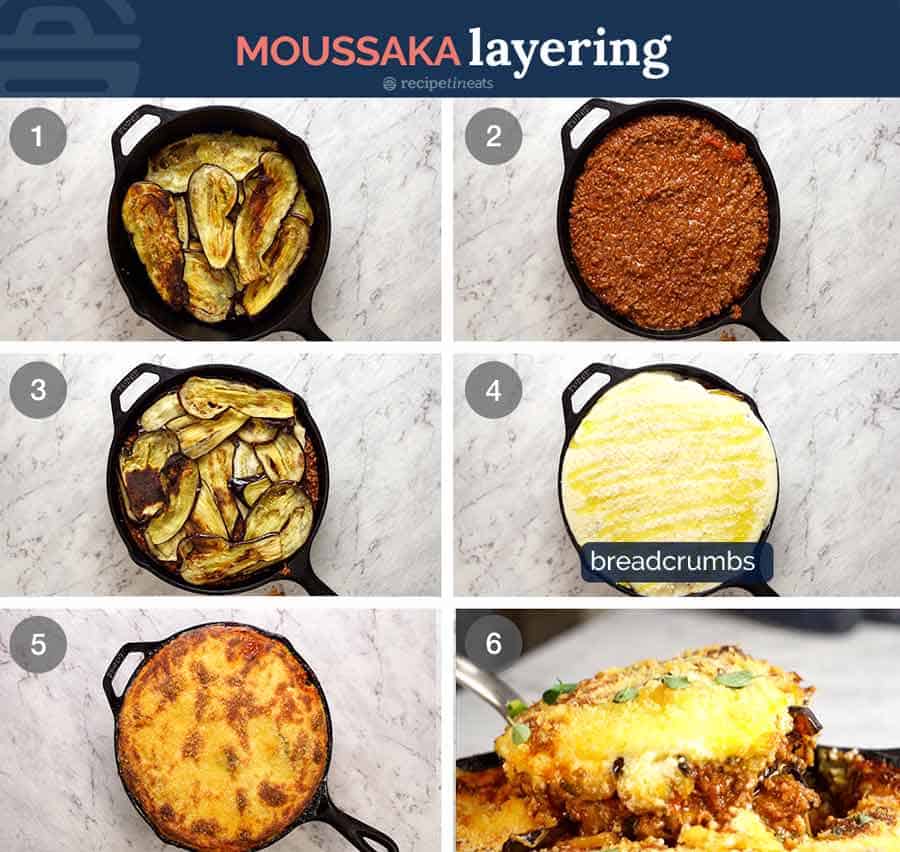 Pop it into the oven to bake away, and THIS is what comes out… 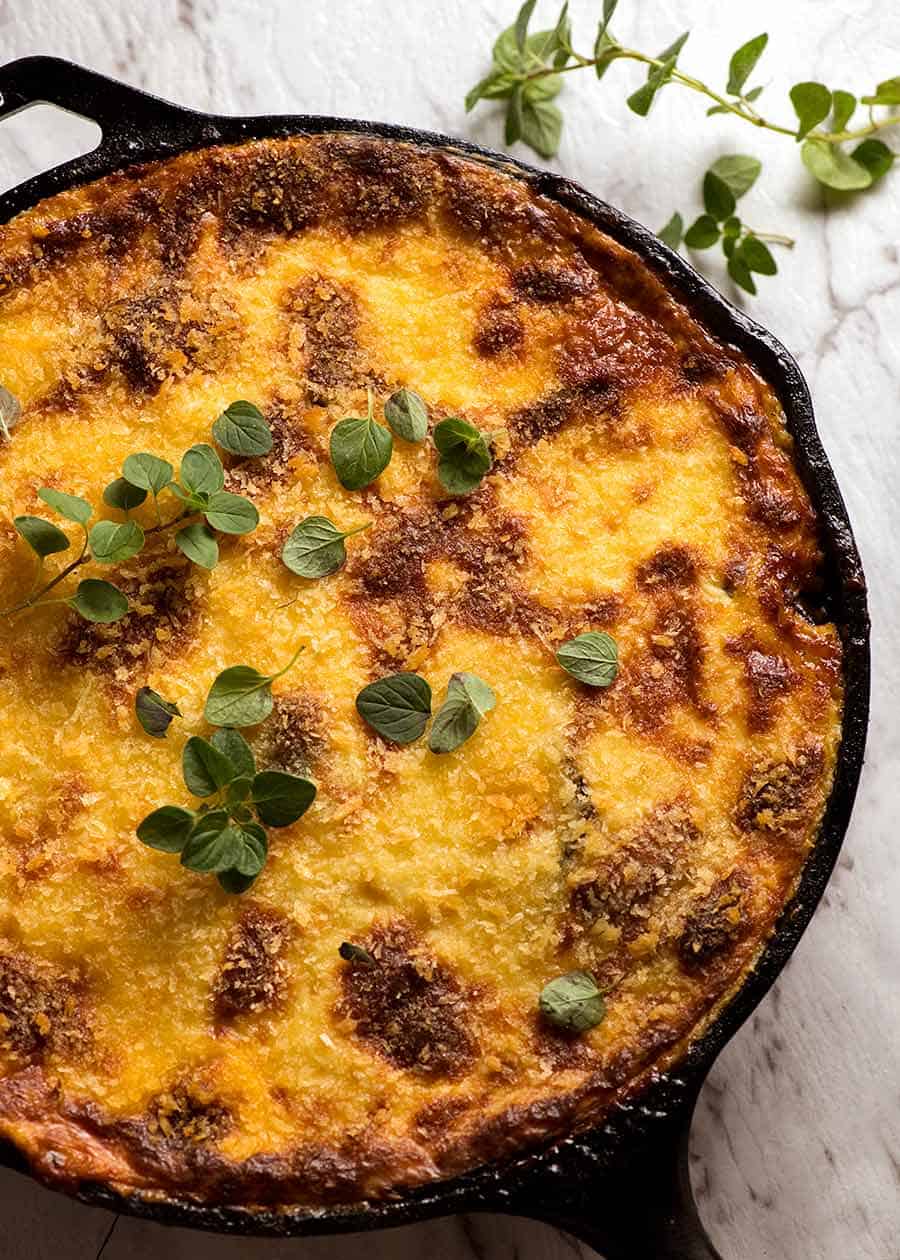 I hate / love that part when you crack through the crunchy golden topping.

Hate it, because I just want to admire how great it looks (ok, I’m lying, I want *people* to admire it  so I can bask in the glory, yes it’s totally childish but let me have that moment because do you KNOW how many pots and pans I dirtied MAKING THIS??!!!)

Love it, because when you crack through that golden top and the white bechamel sauce bursts out, you scoop up a big piece and you see all the amazing layers….. the soft eggplant melding together with that rich meat sauce….

It’s a little bit of food heaven, right there.

Totally worth every single pot and pan. – Nagi x

PS If you’re thinking about all the washing up, double it and that’s about how much mess I created when I made this for the recipe video!!! 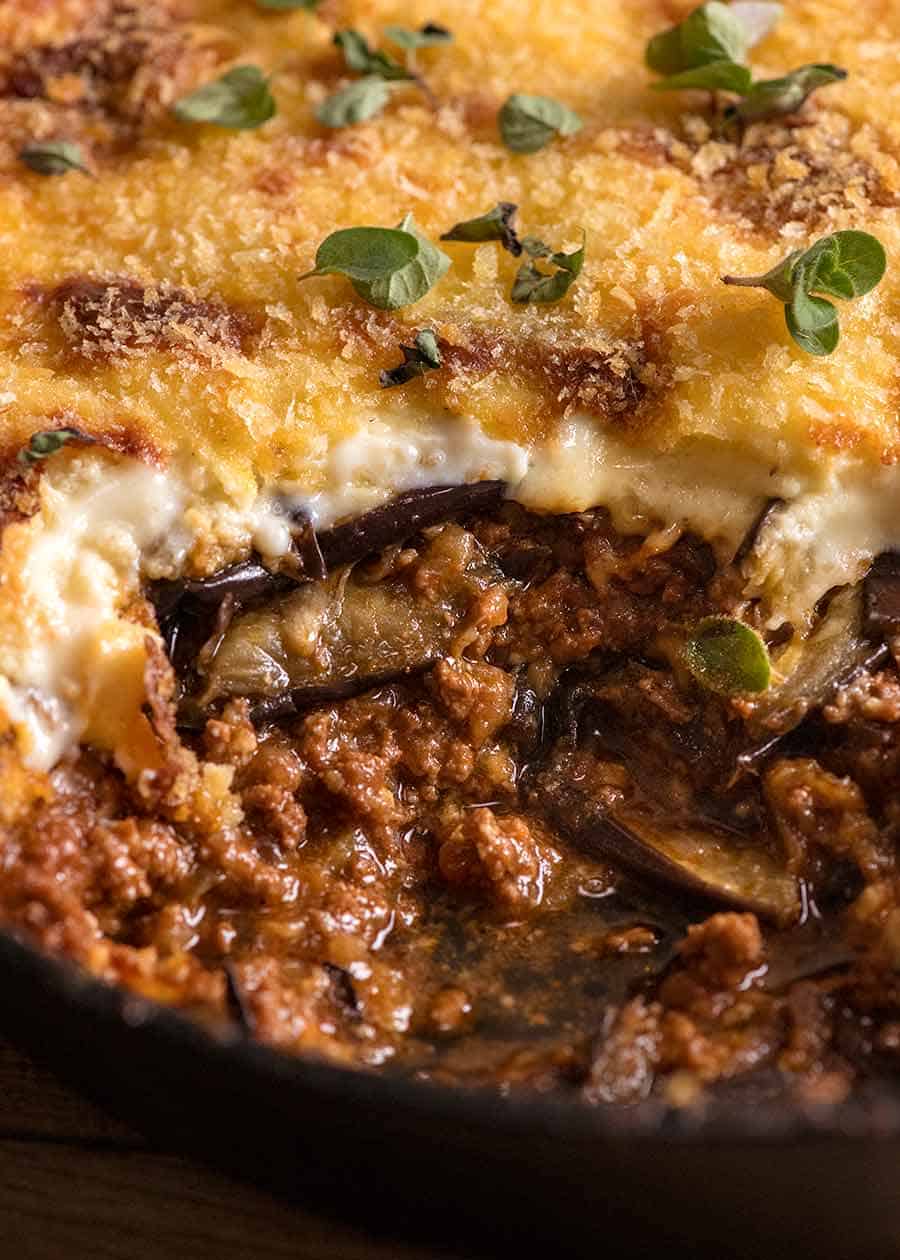 Moussaka recipe
Watch how to make it 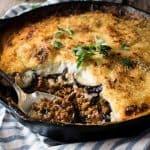 Recipe video above. A traditional recipe for an iconic Greek dish! Layers of soft eggplant, rich beef or lamb filling lightly spiced with oregano and cinnamon, topped with a thick layer of bechamel sauce. It looks like a lot of steps but the recipe has a nice flow to it – I’ve popped prompts in the steps.

2. Beef stock – or use hot water plus 1 extra bouillon stock cube (or 1 tsp of powder)

3. Cheese – Traditionally this is made with grated Kefalotiri Cheese which is actually sold in some large supermarkets in Australia nowadays. But I’ve been making this with parmesan for years.

4. Stock powder – I like using Vegeta or chicken or vegetable stock powder to flavour the white sauce because it adds more flavour than plain salt and there’s a LOT of sauce! But plain salt will do just fine too. (I would probably add a bit more cheese!)

6. Eggplant – the salting removes excess liquid so the eggplant doesn’t become soggy and make the moussaka watery once assembled. Also sometimes eggplant can be bitter and this removes the bitterness.

Some recipes fry, I prefer to bake because you use far less oil. But the quickest way to cook a big load of eggplant like in this recipe is on the BBQ – no need to salt if you do this, just brush with oil and cook on medium high 3 minutes or so on each side until softened!

7. FREEZING: Cook per recipe, then allow to cool. Cover tightly with cling wrap then freeze. To reheat, thaw then reheat at 180C/350F for 25 minutes uncovered or until a knife inserted into the centre comes out hot.

Originally published October 2015, completely overhauled in March 2019 with new photos, step photos, recipe video and most important (of course), addition of a Life of Dozer section!

In recent weeks, Dozer’s been slinking back inside mere minutes after getting his daily big juicy bone. Initially, I scolded him, thinking he had buried it and that I’d have to deal with muddy paw prints through the house when he decided to dig it up for snack time.

But his furry paws were completely clean.

Puzzled, I wondered what was going on.

Then I saw THIS: Dozer looking anxiously up into the pine tree at a MAGPIE that had stolen his bone.

They must’ve been swooping down and stealing it from right between his paws. I think they’re working in teams and sharing the prize.

Dozer’s being bullied by Magpies!!!! 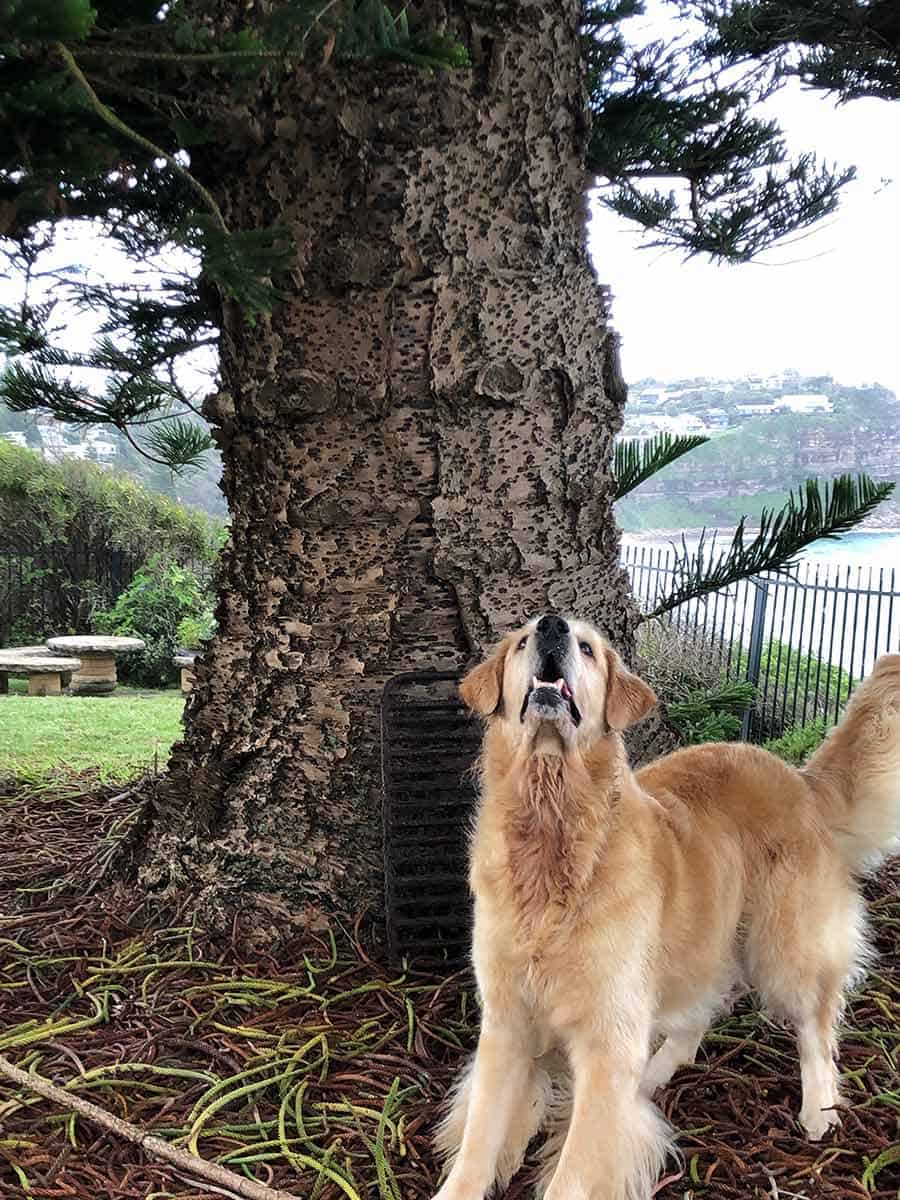