This salad is totally giving me life right now! While I love the warm comforting foods of winter, after a few weeks of all those heavy roasted and stewed foods I start craving fresh vegetables HARD. So today I picked up a $0.99 bunch of kale and looked to my pantry to see what else I could throw into my salad bowl. I toasted up a leftover pita, tossed in a handful of walnuts, golden raisins, and parmesan, then pulled it all together with my favorite tangy champagne vinaigrette. This Kale Salad with Toasted Pita and Parmesan is light but filling, full of earthy-nutty flavor, and has just a few pops of sweetness to make things interesting. It’s simple winter salad perfection. 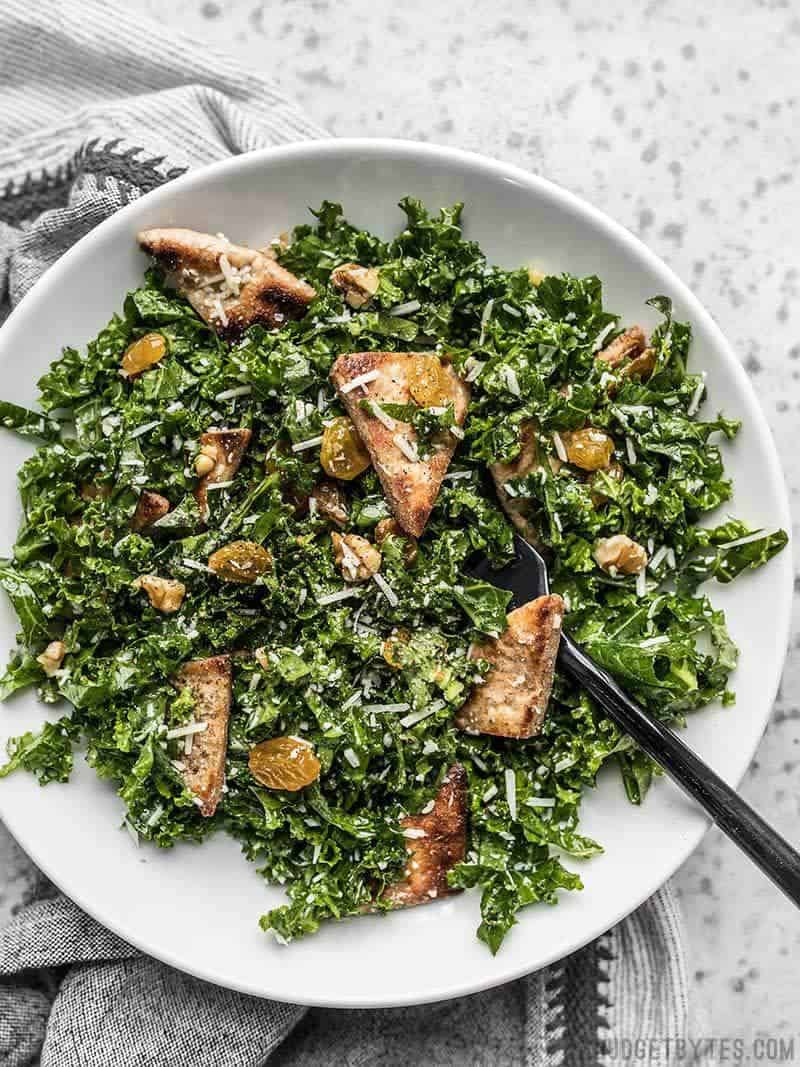 I wanted to make my own champagne vinaigrette for this, but alas, the grocery store didn’t have a single bottle of champagne vinegar. But, the vinegar itself would have cost as much as the pre-made dressing, so I just bought a bottle of my favorite, Girard’s Champagne Vinaigrette (that’s the one in the weird triangle bottle). A non-creamy Caesar dressing would also go nicely with this salad, my favorite being Ken’s Steakhouse brand. Any type of lemon vinaigrette, or even something with a fruity flavor like orange or pomegranate would also be nice!

Texture is everything with this salad, so don’t skimp on getting that kale shredded very fine. If you can’t manage to shred the kale, at least be sure to chop it very fine. If you’re buying pre-chopped kale rather than a bunch of kale, chop or shred it even further than how it comes in the bag. 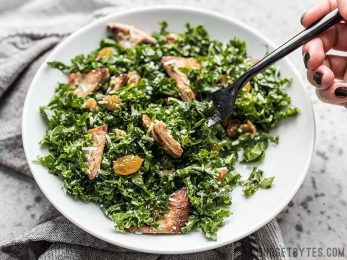 Fresh salads are not just for summer! This Kale Salad with Toasted Pita and Parmesan features winter flavors, but is still light, fresh, and crunchy! 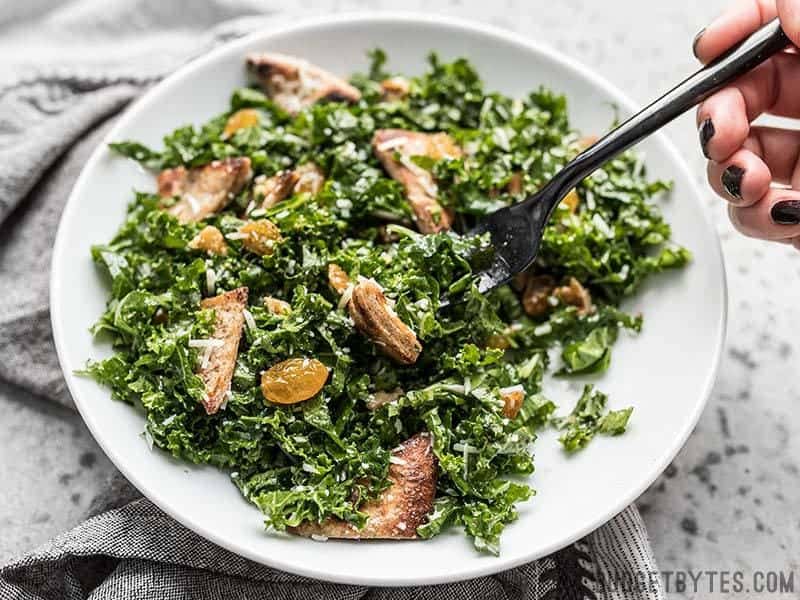 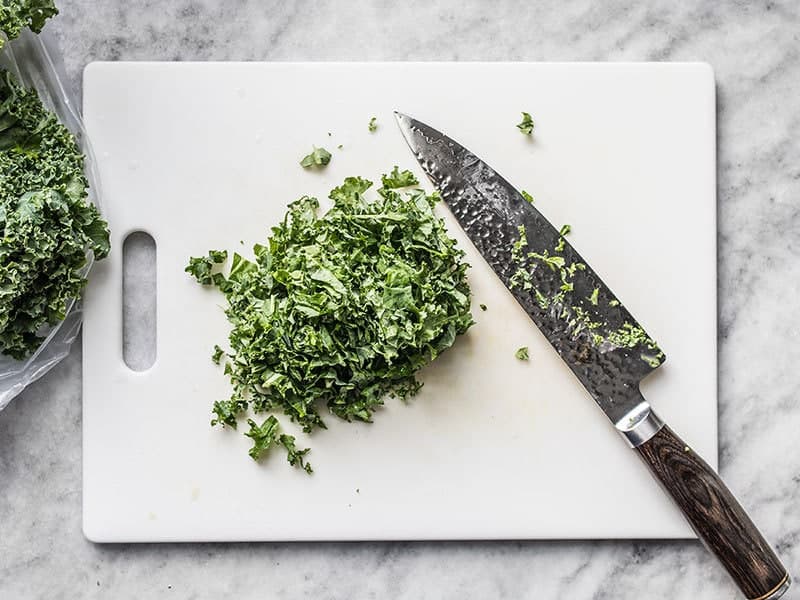 Pull the kale leaves from the woody stems, then shred it finely. To shred the kale, I grab one handful at a time, compress it in one hand, then pull my fingers back a little at a time as I make fine shreds with the knife in the other hand. If you can’t manage to finely shred the kale, you can just chop it very finely. My one bunch of kale yielded about 8 cups, loosely packed, once shredded. 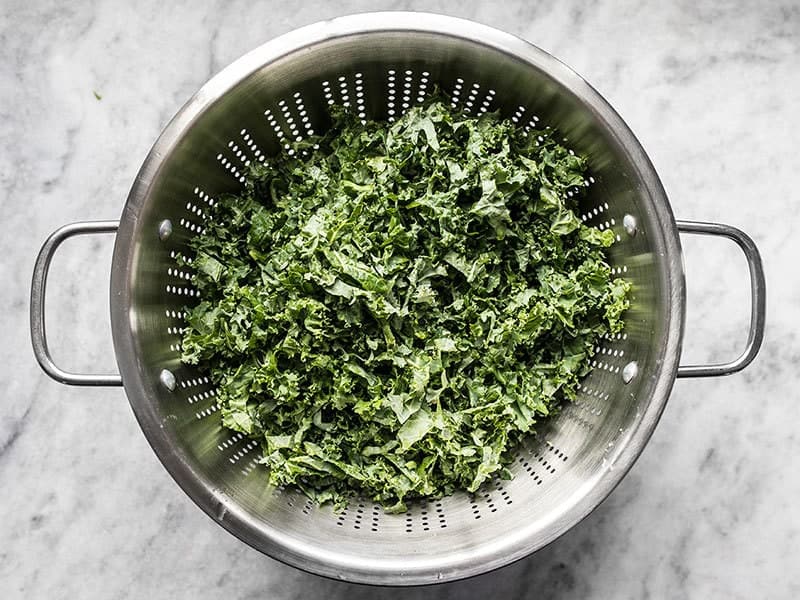 Rinse the kale well in a colander, then let it drain as you prepare the rest of the ingredients. 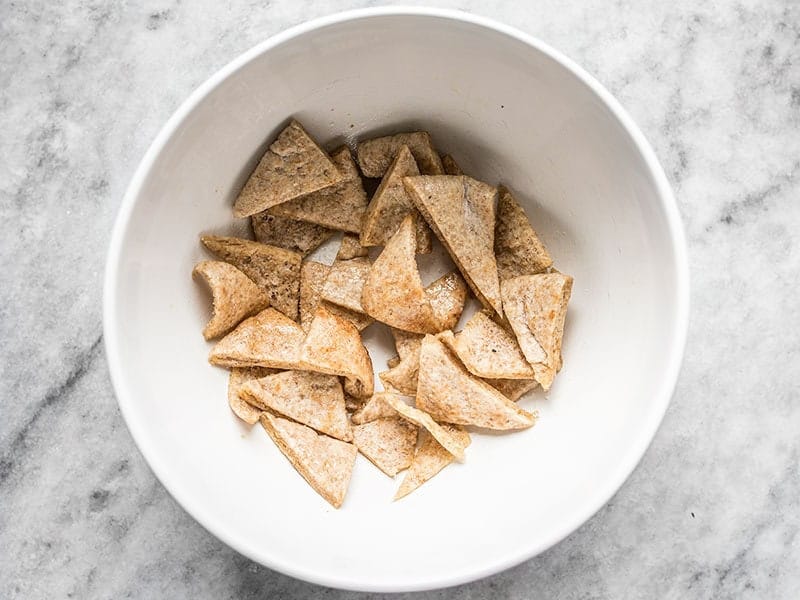 Cut one whole wheat pita into 1-inch triangles. Place the pita triangles in a small bowl and drizzle 1/2 Tbsp olive oil. Toss the pita until it is well coated in oil. 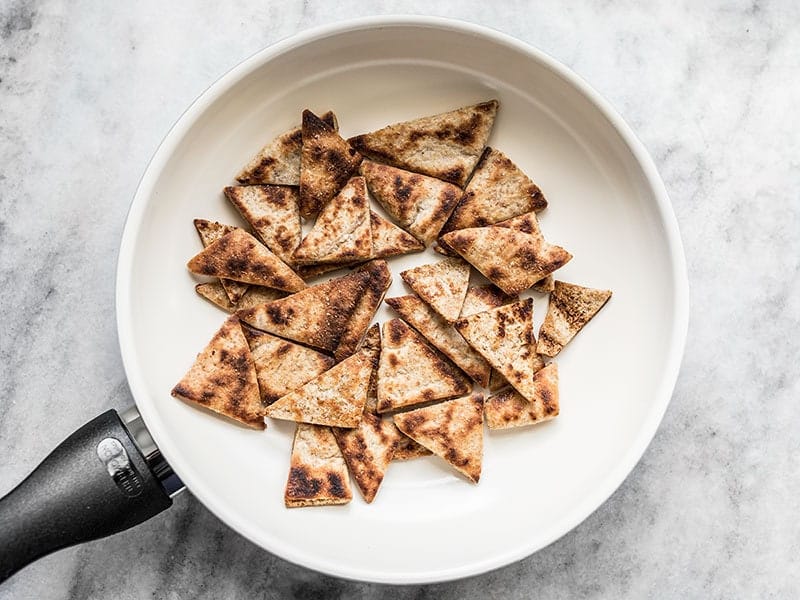 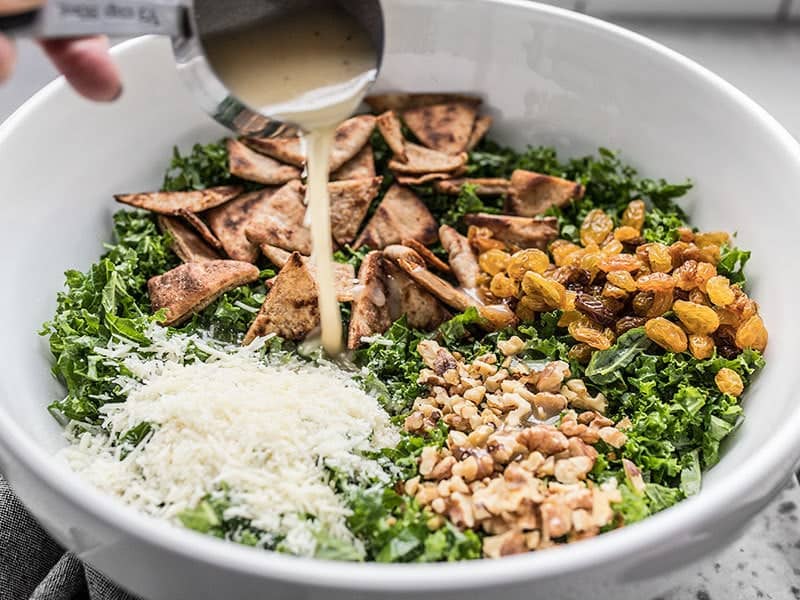 To assemble the salad, place the shredded kale in a large bowl and add the toasted pita, walnuts, 1/3 cup golden raisins, and 1/3 cup shredded or grated Parmesan. Pour 1/3 cup champagne vinaigrette over top.

Toss the salad until everything is coated in dressing and Parmesan. You can serve the salad immediately, or you can let it sit for 10-15 minutes and the dressing will soften the kale. 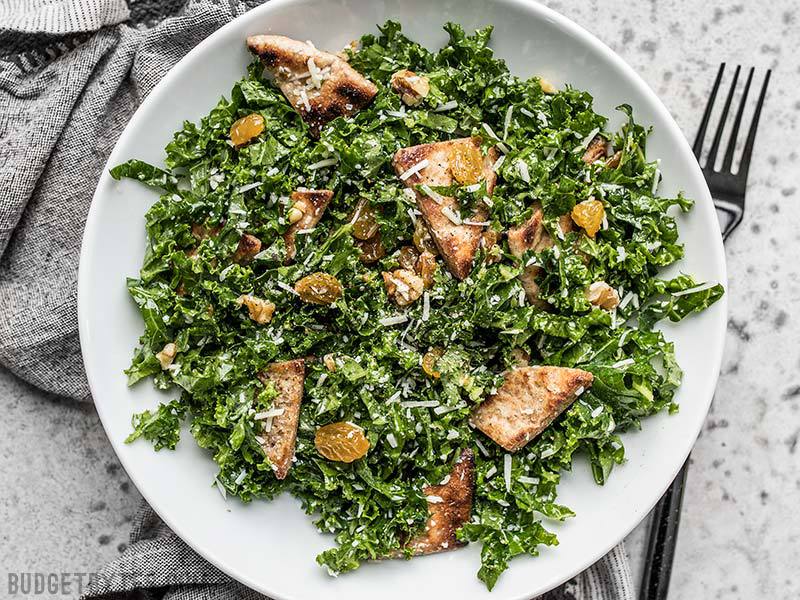 And that’s it! The toasted pita absorb the dressing and get super delicious (my favorite part)!