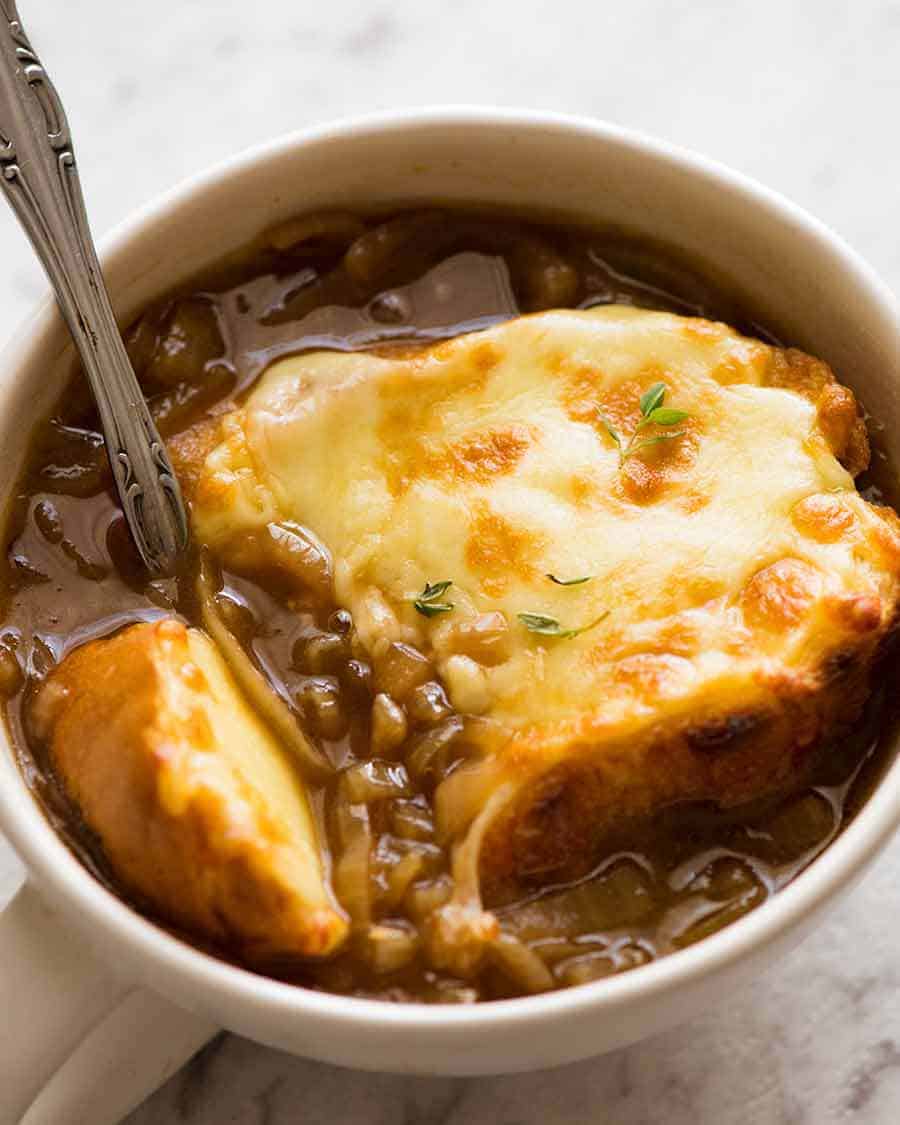 Caramelising onions calls for patience, but it’s worth it. You’ll be rewarded with deeply golden, intensely sweet onions that forms an incredible flavour base for this French Onion Soup. But if you’re pressed for time or lacking energy, you’ll love learning how to caramelise onions in a slow cooker!

French Onion Soup is probably one of the most epic soups in this whole wide world. And yet, the soup itself is made with very few core ingredients: butter, onions, flour and stock/broth.

The magic is in the caramelisation of the onions, cooked slowly for at least 40 minutes. And of course the crowning glory – the glorious melted cheese toast!! Because let’s face it – French Onion Soup without the cheesy toast is just onion soup. Meh! 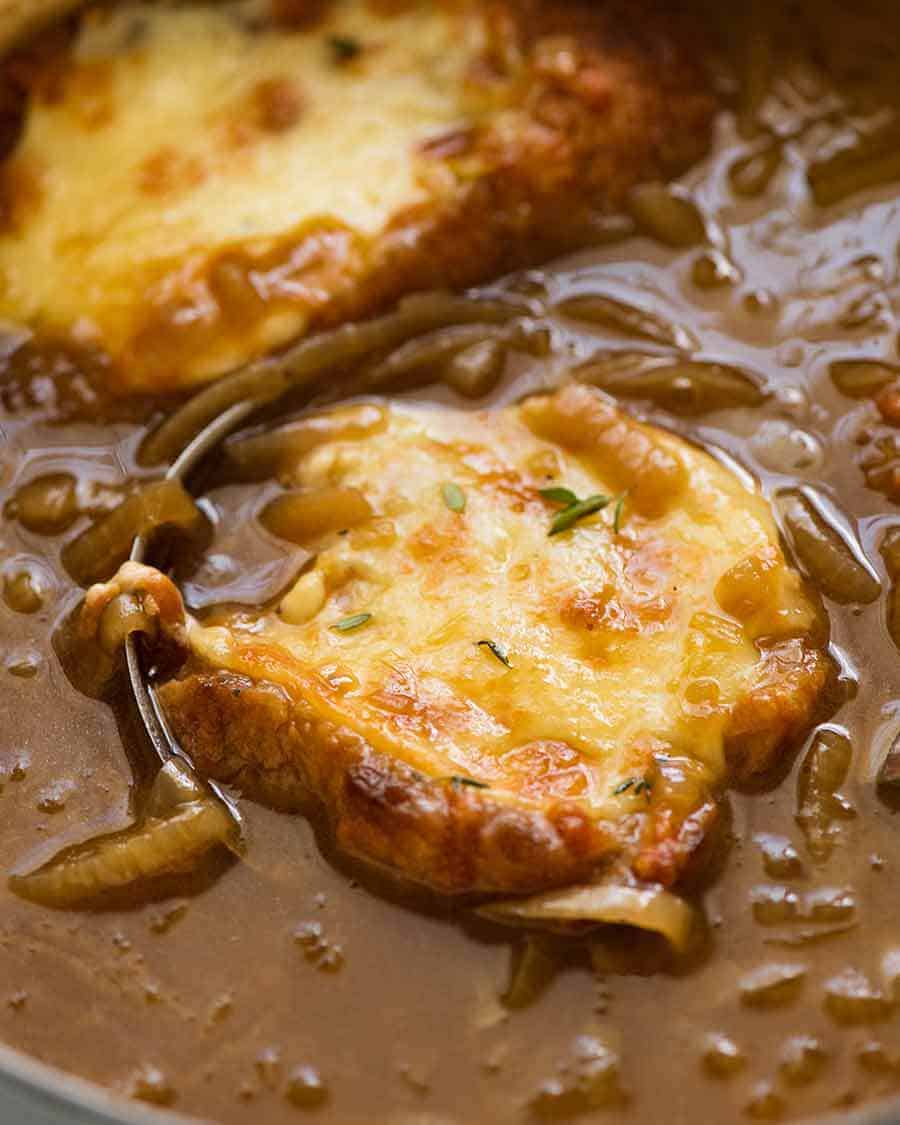 It’s not high-stress or high-energy effort. For most of the time, the onions are cooked over low heat so you just need to stir them every now and then.

It’s the sort of thing that’s good to make while pottering around the kitchen doing other things. My cast iron pot is 24 cm / 10″ wide and it was full to the brim with raw onions and took almost an hour to caramelise. If you have a wider base pot, it will be faster – probably closer to 45 minutes.

Though of course, if this all seems like too much effort for you…… introducing…. 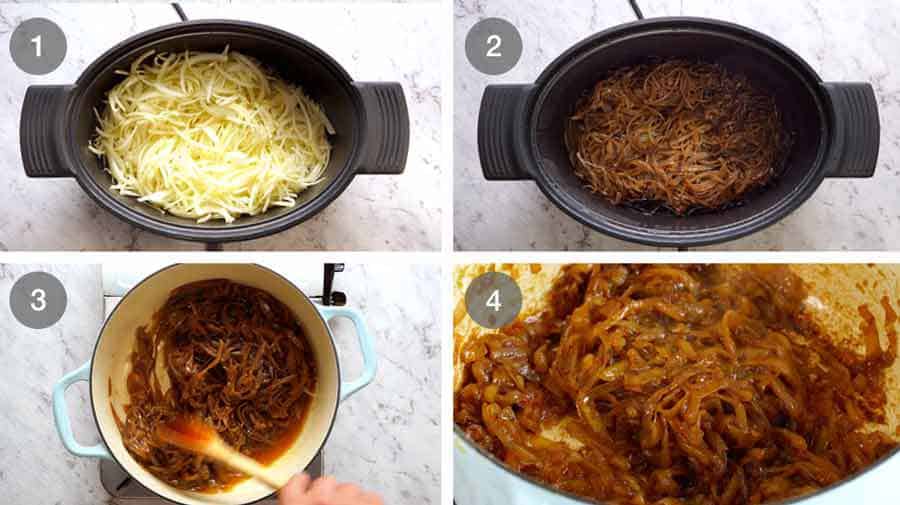 I first learned of this from a reader then found this recipe on TheKitchn. Terrifically convenient and totally hands off, just throw the onions in, drizzle with butter or oil then leave on low for 10 hours.

This will get you 75% of the way there. The onions are browned a bit but lack the same intensity of flavour you get from caramelising on the stove.

So you do still need to cook the onions on the stove for 10 – 15 minutes to achieve the same true flavour. And while one may wonder what’s the point, there’s a big difference between cooking down onions for almost an hour on the stove vs 10 minutes.

Plus, no having to man-handle a gigantic mound of onions in a pot that’s too small (me, me!).

THE REST IS EASY!

Caramelised onions aside, the rest of the soup is effortless. Get all the tasty brown stuff off the bottom of the pot by deglazing it with a touch of wine. A touch of flour to thicken the soup every so slightly, a LOT of broth, and an optional sprig of thyme and bay leaves. 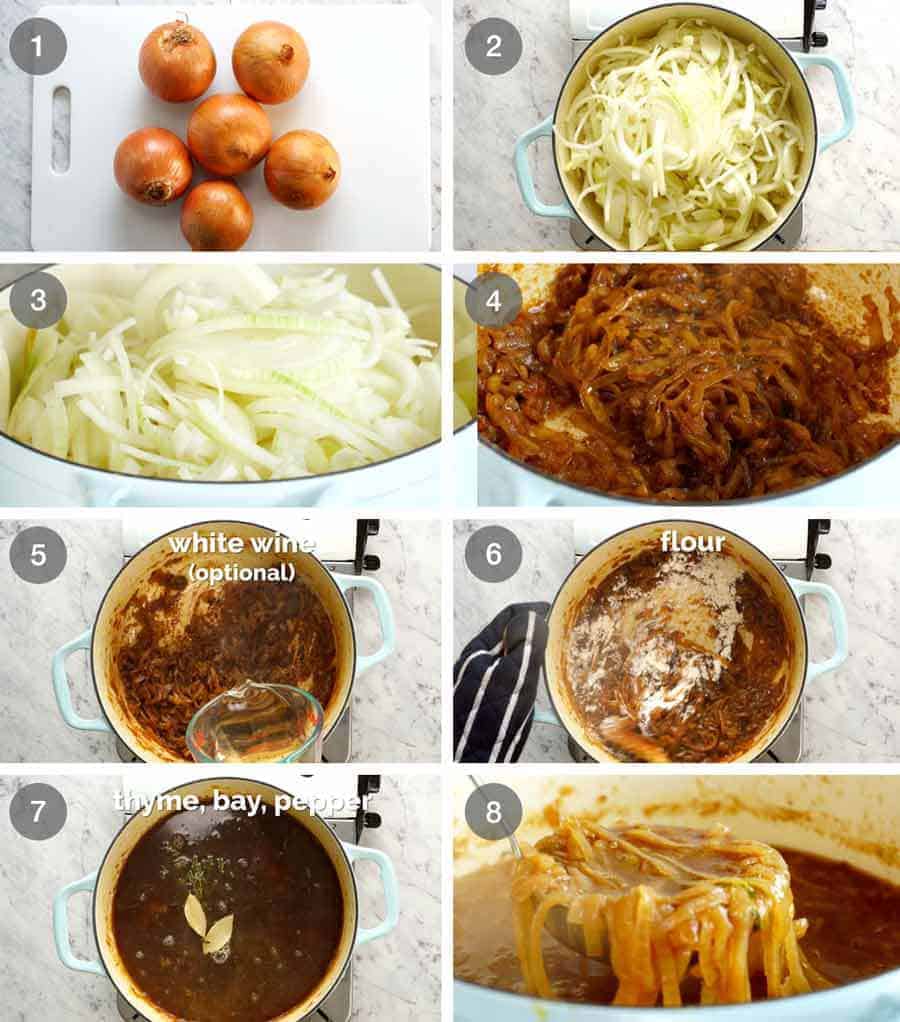 GOOD BEEF BROTH IS A MUST!

If you use store bought, which I often do, use a good quality beef broth/stock. I personally do not recommend any of the mainstream brands sold in Australian supermarkets. I use Maggie Beer and Moredough from Harris Farms (I stock up when it’s on sale!), or private labels from butchers.

If you can’t get good quality beef broth, use chicken or vegetable instead. I find that the quality of those by mainstream brands is much better than the beef stock. The beef is fine to use in things like gravy and stews, but not when it’s a key ingredient like in this recipe. 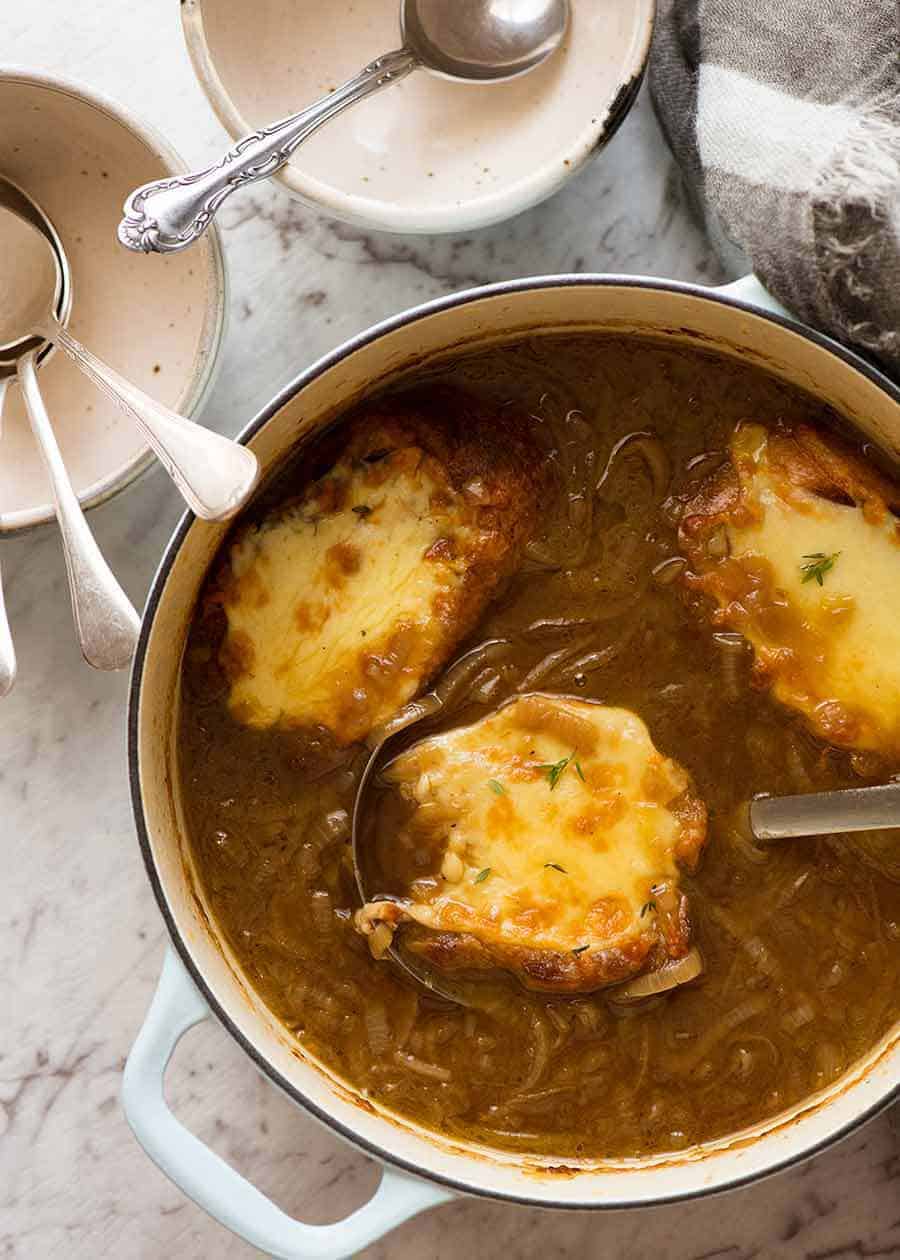 Neither do I! Can’t justify the storage for ONE soup that calls for it. Sure, it looks thoroughly dramatic to be served a piping hot bowl from the oven with the entire surface covered in bubbling cheese (and a piece of bread under there somewhere).

But actually, I prefer making grilled cheese separately and popping them in the bowl because the bread isn’t as soggy from absorbing the soup by the time it gets to the table.

Bonus: You’re less like to get 3rd degree cheese-burns on your chin. 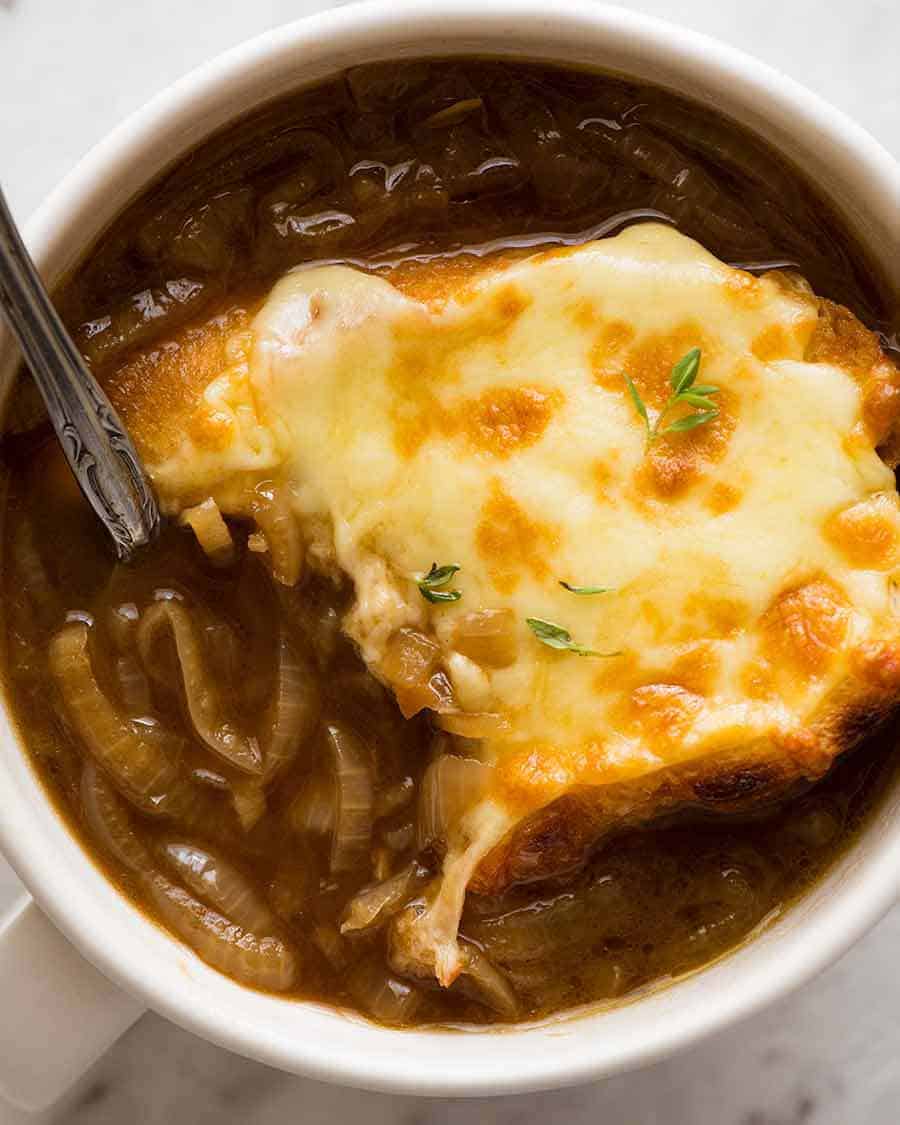 FRENCH ONION SOUP RECIPE
WATCH HOW TO MAKE IT 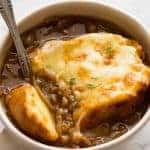 Recipe video above. One of the most epic soups of the world does take time to make but it’s so worth it! The deeply caramelised onions make an incredible flavour base for the broth. And that cheesy toast is a must! See recipe notes for SLOW COOKER Caramelised Onions.

1. Onions – halve them then cut from the top to bottom (see video). It makes them hold their shape better when cooking and you don’t get stringy bits. But it’s not a big deal! Half the onions in the video were accidentally cut the other way.

2. Wine is used to deglaze the pot here, to get the brown stuff off the base of the pot and also the wine adds flavour into the soup broth. It’s fine to skip it – the beef broth ends up having the same deglazing effect.

Any non-sweet, non-woody wine is fine. Sauvignon Blanc, Pinot Gris are what I use.

3. Broth/stock – French Onion Soup can be made with chicken or beef broth. It is more commonly made with beef stock, from what I have observed.

Use a good quality beef stock. I personally do not recommend mainstream brands from major supermarkets in Australia. I use Maggie Beer and Moredough from Harris Farms, , or private labels from butchers.

It is better to use chicken or vegetable broth rather than sub-standard beef broth.

Best to use low salt and add salt if required.

4. Bread – The idea with the recipe is that you can use a spoon to cut through the bread into the soup to eat it (see video). So it’s best not to use chewy artisan breads like sourdough. The softer the crumb, the better. Even a thick standard sandwich bread would work!

5. SLOW COOKER CARAMELISED ONIONS (see recipe video above) – Read in post for background. Directions: Place onions in slow cooker, toss with 2 tbsp (30g) melted butter. Slow cook on LOW for 10 hours. Onion will be browned but won’t have a proper caramelised flavour. Add 1.5 tbsp (25g) butter into large pot over medium high heat. Tip in all the onions AND juices from slow cooker. Cook 10 to 15 minutes until deeply caramelised. Proceed with recipe.

I KNEW I’d find a use for those onion goggles one day!

(I don’t need them, I wear contacts so I’m onion-proof. Gimme all the onions to chop!) 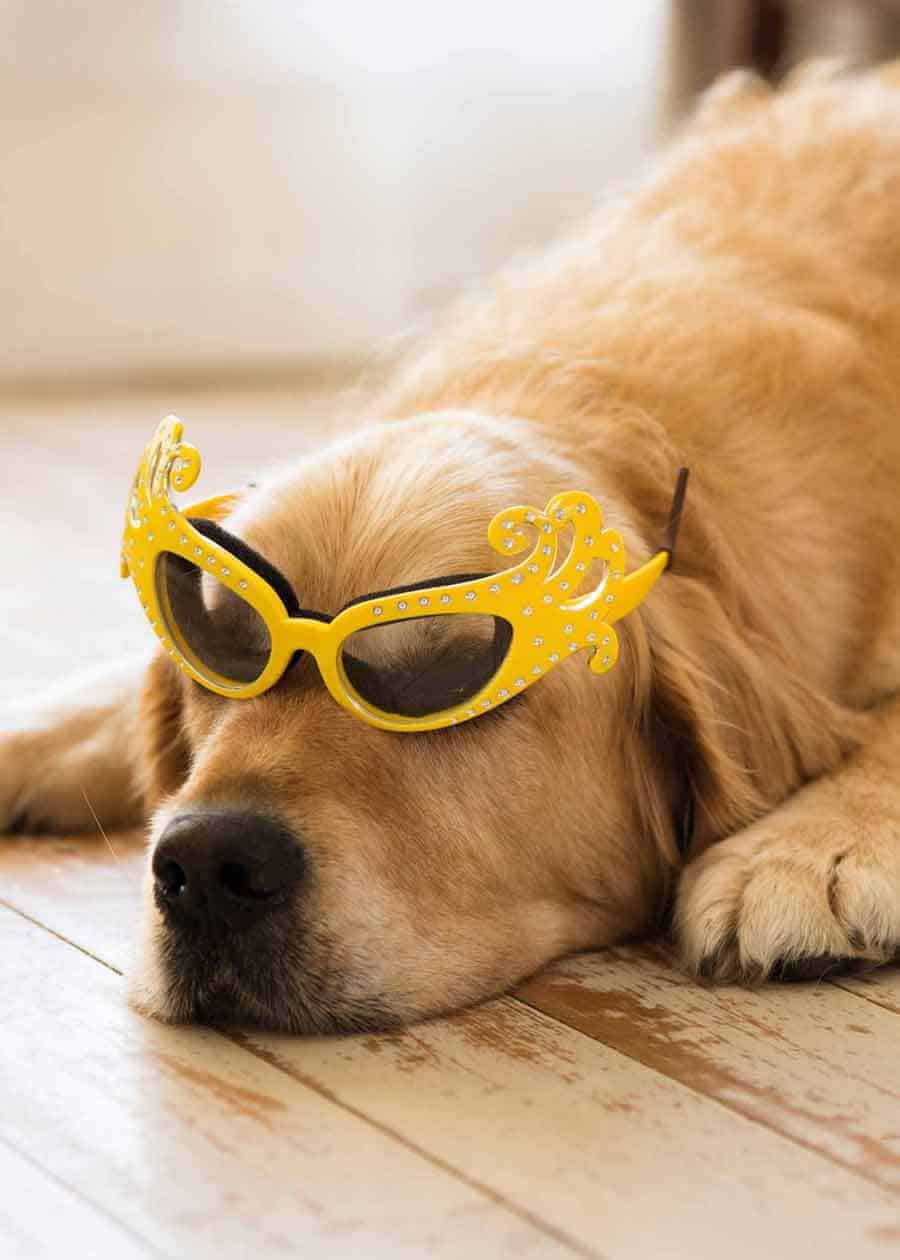