Well, I guess now I *have* to have a party because I’ve got a big vat of Spicy Chorizo Cheese Dip and I definitely can’t be left alone in a room with it. I can’t be trusted with this much cheesy goodness. 😳 But if you are going to have a party, like say for football, Halloween, or any other event, this Spicy Chorizo Cheese Dip is totally the way to go! You only need 5 ingredients and there is no American cheese, Velveeta, or “cheese product” involved. 👏

P.S. It’s not intentional that half the pictures of this recipe are of me scooping it up with a chip. I literally couldn’t stop. 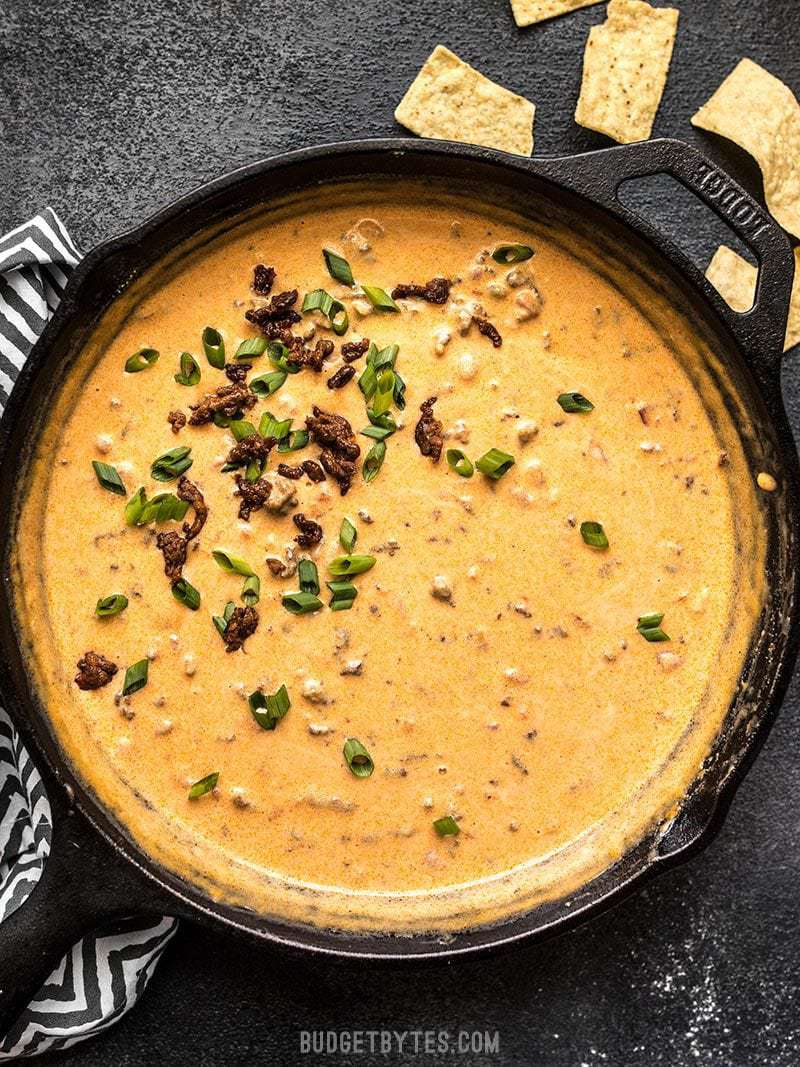 It’s all about the Chorizo…

The chorizo is the magic ingredient in this cheese dip, so DON’T leave it out. Chorizo is packed with spices, which will automatically season the entire batch of cheese dip. Make sure you buy Mexican chorizo, which is a fresh ground sausage, not Spanish chorizo, which is a hard cured sausage. I prefer Johnsonville brand chorizo because it’s not as fatty or greasy as some other brands, and you can find it in most major grocery stores. It does come in both links and loose ground meat, so if you get links just slice the casing open and empty the ground meat into your skillet.

You’ll probably want to keep your Spicy Chorizo Cheese Dip warm so that it stays creamy for your party guests, so I did a little testing. My slow cooker was a bit too large for this batch size, so I tested it in my 2 qt rice cooker on the “warm” setting. It kept the cheese dip creamy and warm for a whole hour, stirring only occasionally, and the dip never clumped up or broke down. It probably would have lasted longer, but I had things to do, places to go, people to see, and I had to end the experiment.

I also tested reheating the Spicy Chorizo Cheese Dip and it performed well! I spooned about a half cup into a small bowl and microwaved on high for 30 seconds, then stirred, microwaved for about 15 seconds more, and then it was melty, cheesy perfection. No clumping, no separating, just creamy goodness! 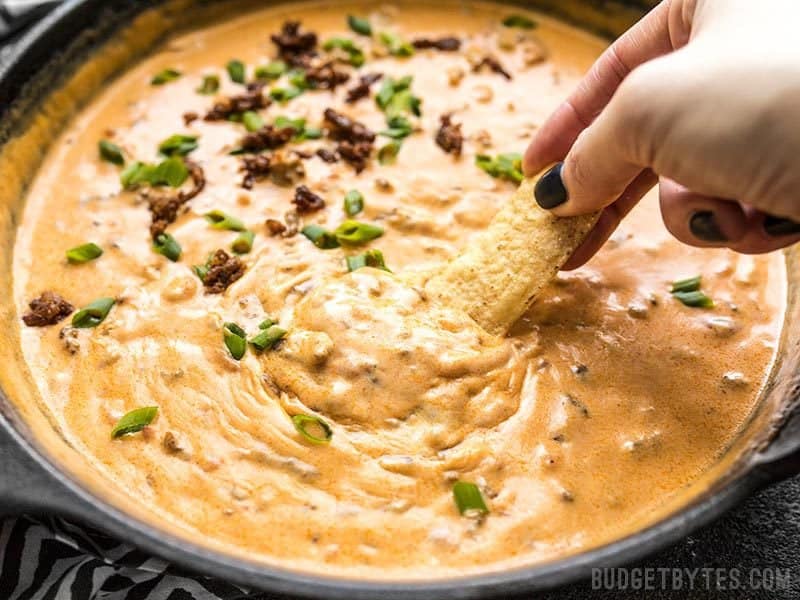 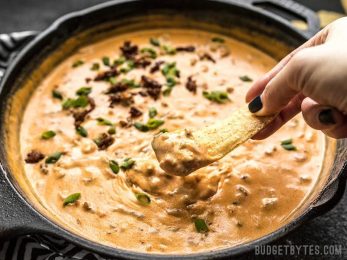 This incredibly easy Spicy Chorizo Cheese Dip only has five ingredients, no processed cheese, and is sure to be the star of your next party!

*Cheddar can be used in place of Monterey jack, but use either mild or medium, as sharp tends to break or separate more easily. Use block cheese that is shredded by hand for best results. 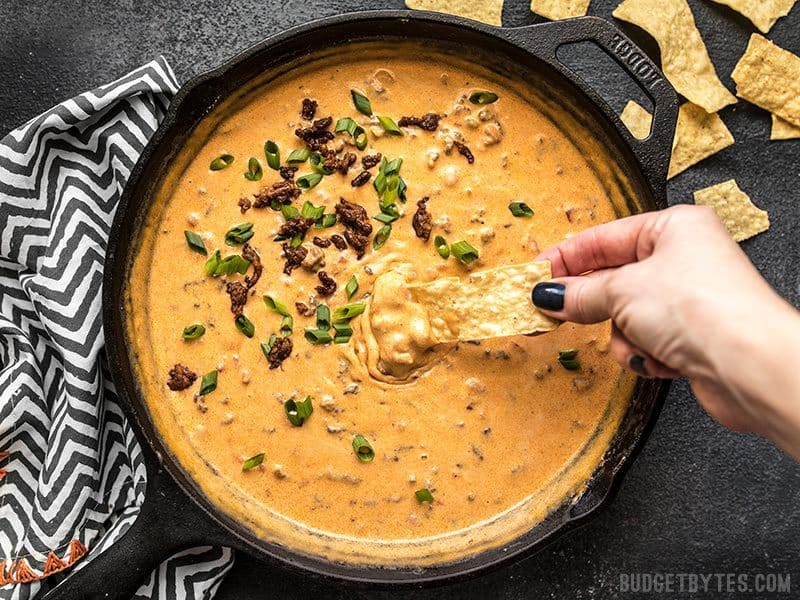 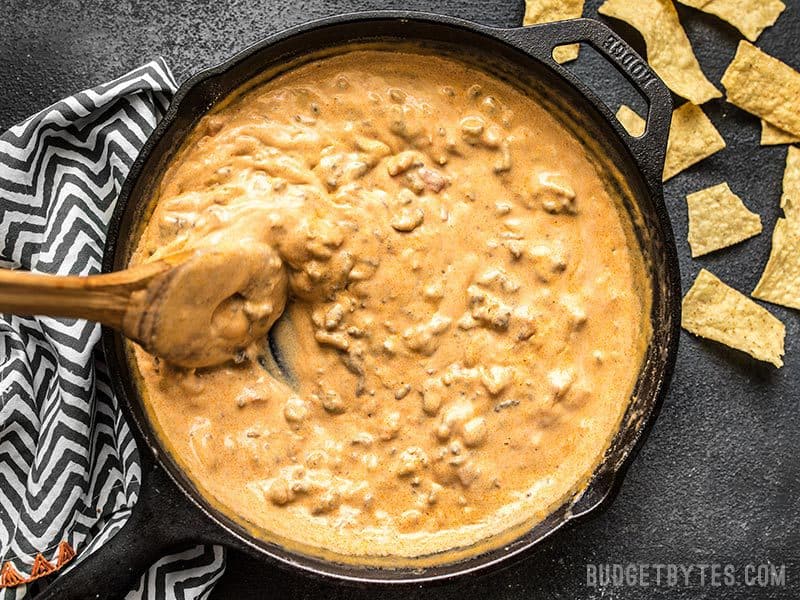 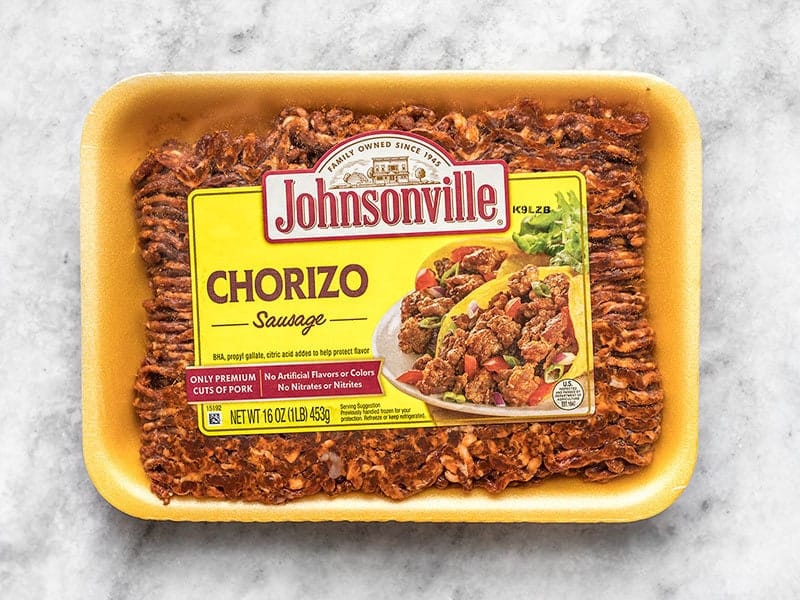 If you’re unfamiliar with Mexican chorizo, it’s a heavily spiced ground pork product. Super yummy. I like this brand because it’s a lot less greasy than some others I’ve tried. It comes in both links and loose ground meat, like this. If you get links, just cut open the casing and scoop the meat into your skillet. 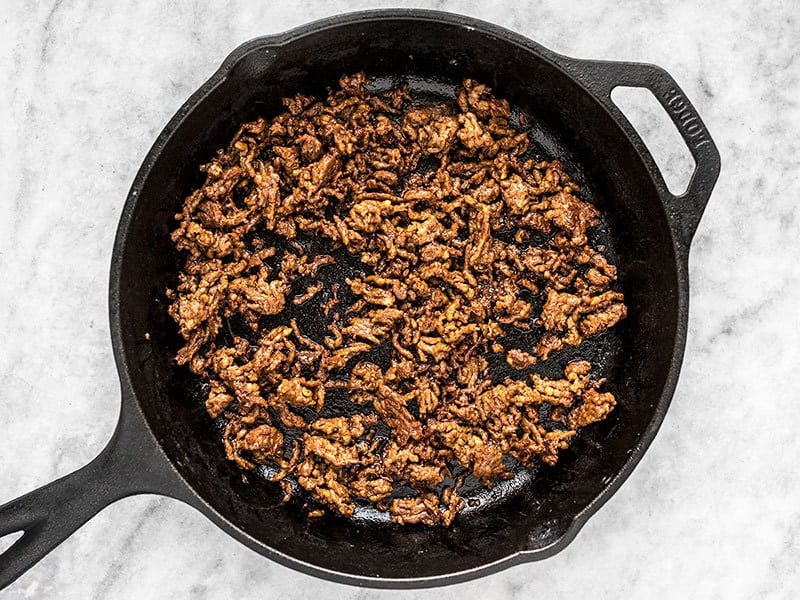 Brown 1/2 lb. of the chorizo in a skillet over medium heat until it’s a bit crispy on the edges (you can freeze the rest of the chorizo). If your chorizo is super fatty, you may want to drain some of it off before moving to the next step. 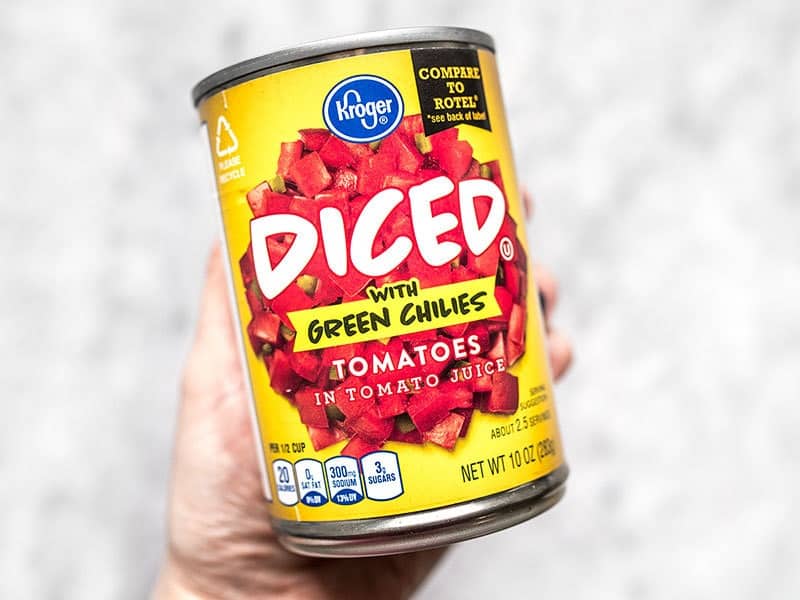 If you’re familiar with Rotel, you can use that, or use a generic version of diced tomatoes with green chiles, like I did. Drain the excess liquid from the can before adding them to the skillet. 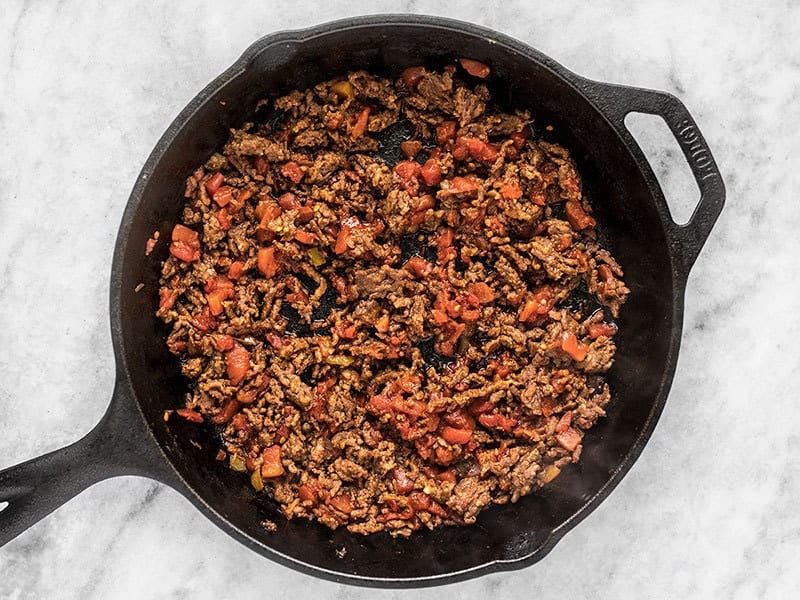 Continue to stir and cook the Rotel and chorizo until most of the moisture from the tomatoes has evaporated (another 3-5 minutes). 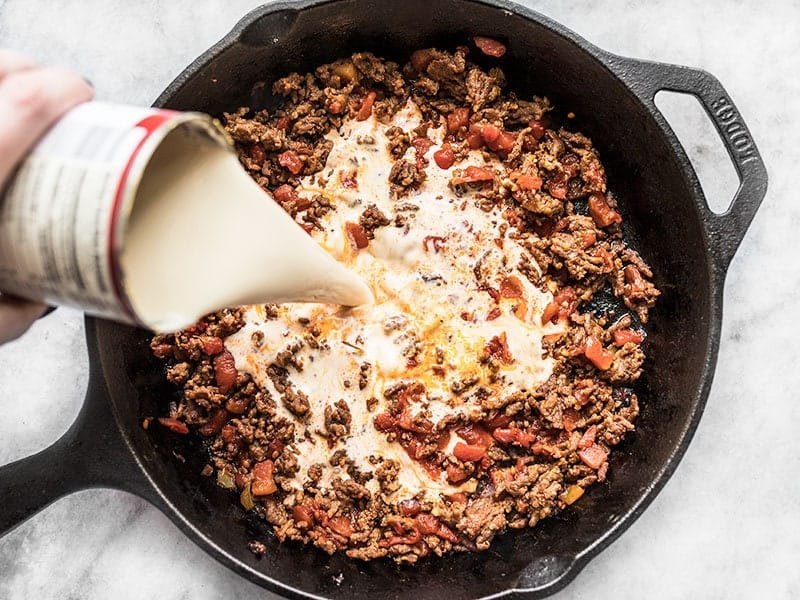 Add one 12oz. can of evaporated milk to the skillet and allow it to heat through. 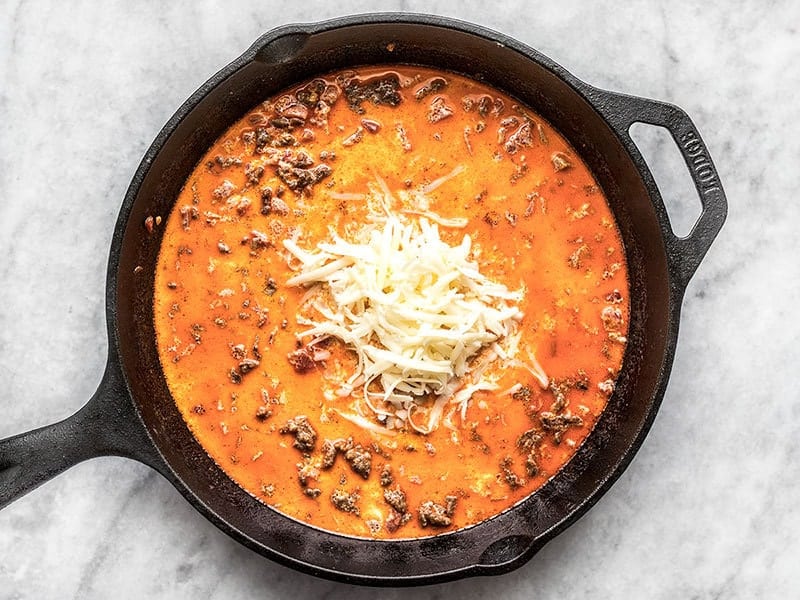 Once the liquid is hot, turn the heat under the skillet down to low. Begin adding the 12 oz. of shredded Monterey jack, one handful at a time, stirring until it is fully melted in before adding more. (The liquid looks really orange because the fat from the chorizo is floating on top and it’s orange from all the spices). 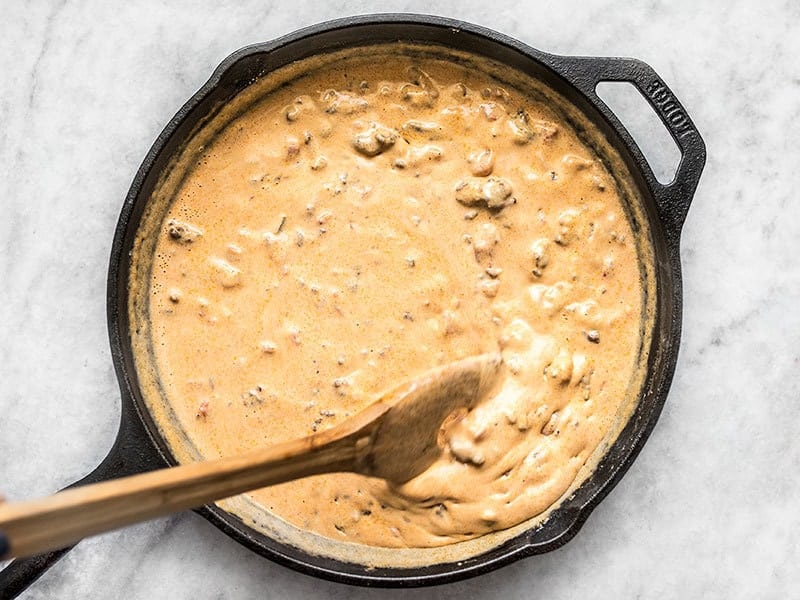 Once all the cheese has been melted into the sauce, it will be thick and delicious! Turn the heat off. 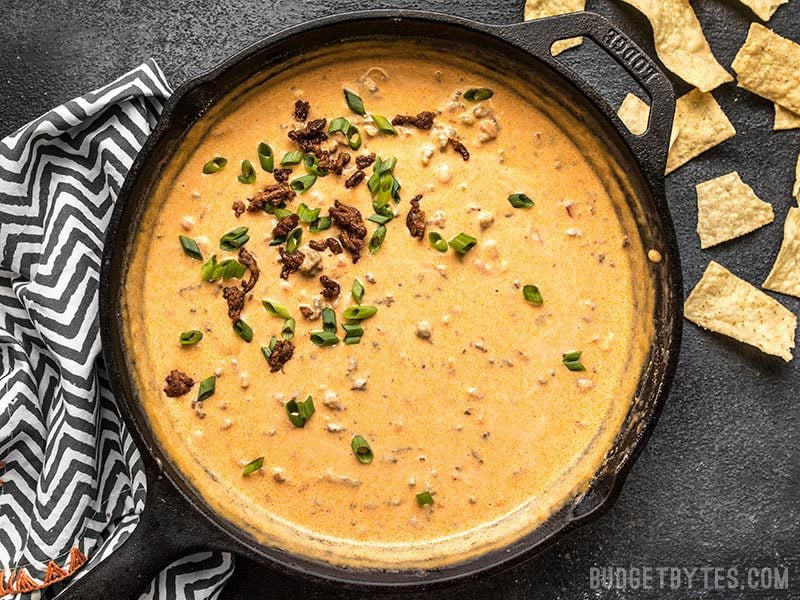 Garnish the Spicy Chorizo Cheese Dip with green onions, and serve! (I also reserved a tablespoon or so of the crispy chorizo and used that as garnish.)