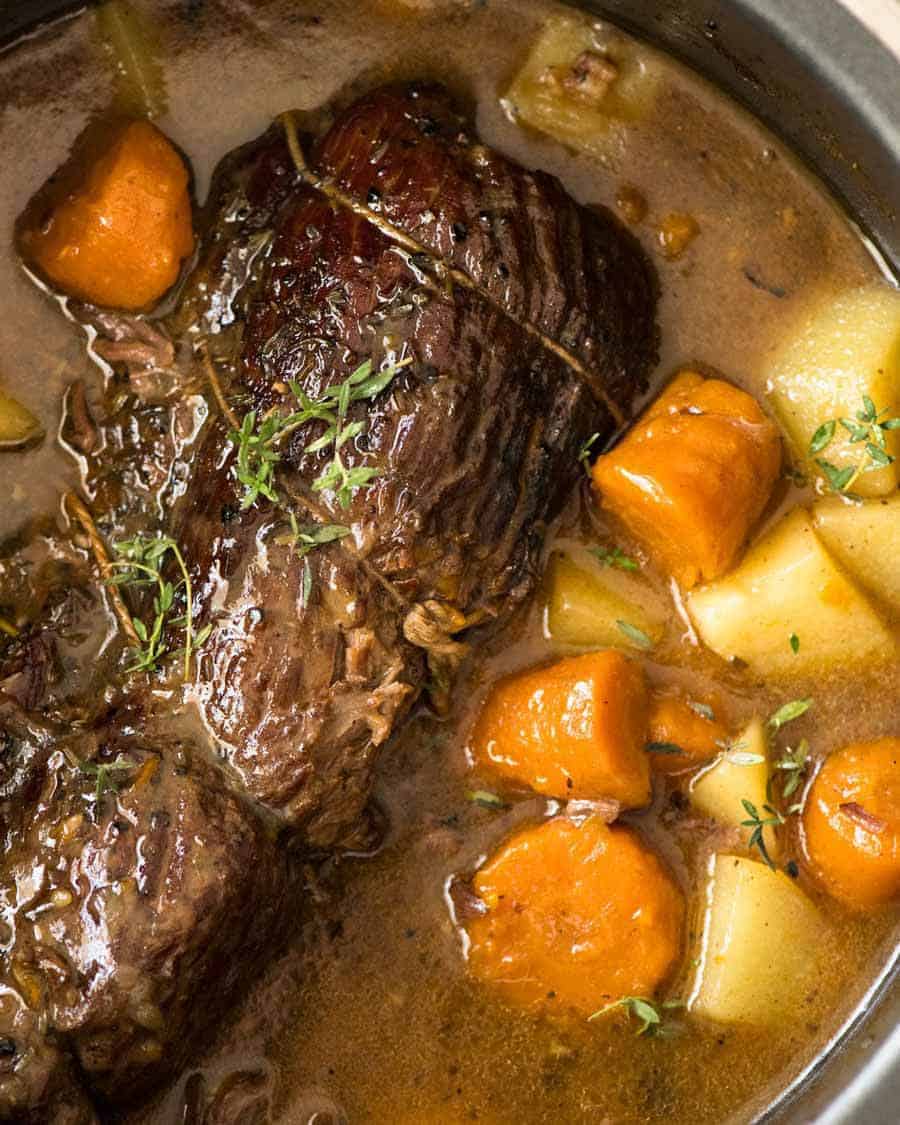 The ultimate one pot family meal – Slow Cooker Pot Roast! This beef pot roast is a little different to the usual – the braising liquid is thickened slightly so it’s more like a gravy rather than just watery broth. So it’s meltingly tender slow cooker roast beef, vegetables and potatoes smothered in gravy…YES PLEASE!

This pot roast recipe was originally published January 2018. Updated September 2018 for housekeeping matters. No change to recipe – I wouldn’t dare!

I wasn’t a fan of pot roast for most of my life. I just didn’t get it – the beef and vegetables were fine, but typically they are braised in just liquids that aren’t thickened in any way so the end result is like a watery broth.

Plenty of flavour in it, but when you pour it over the beef and vegetables, it doesn’t cling to it at all because it’s watery.

So I decided to change it and thicken the sauce using a touch of flour. So it’s more like a gravy. Now THAT’s a pot roast worthy of company, in my humble opinion!!! 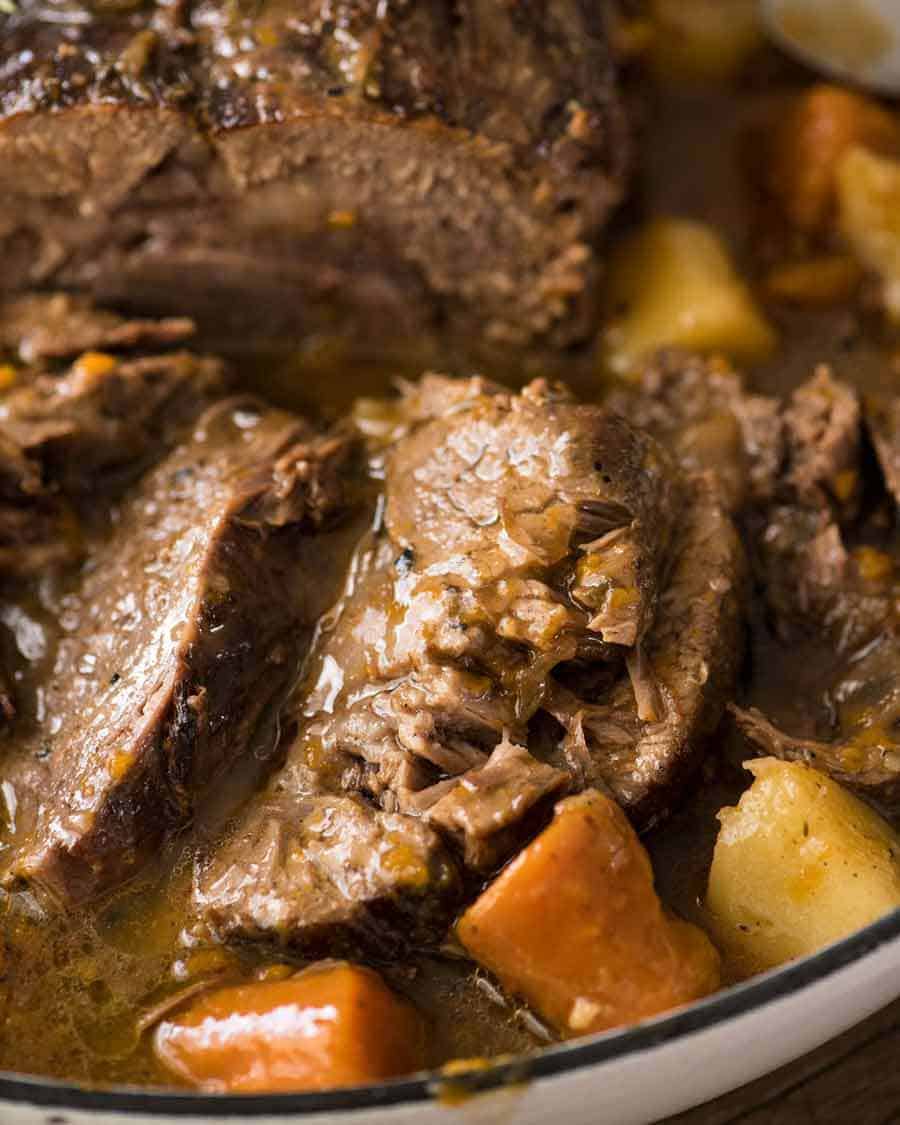 CHUCK ROAST IS THE BEST CUT

I’m convinced that Beef Chuck Roast was put on this earth to be made into Pot Roast. Is there any better way to transform a good value cut of beef than than to turn it into a fall apart tender roast beef with flavoured loaded vegetables smothered in a gravy?

Chuck roast can be purchased in large pieces that aren’t rolled or rolled. You want to use rolled chuck roast for Pot Roast, otherwise the beef ends up all warped. Supermarkets and butchers should carry chuck roast that’s already rolled, otherwise, you can roll it yourself and tie with kitchen string or ask the butcher to do it for you. 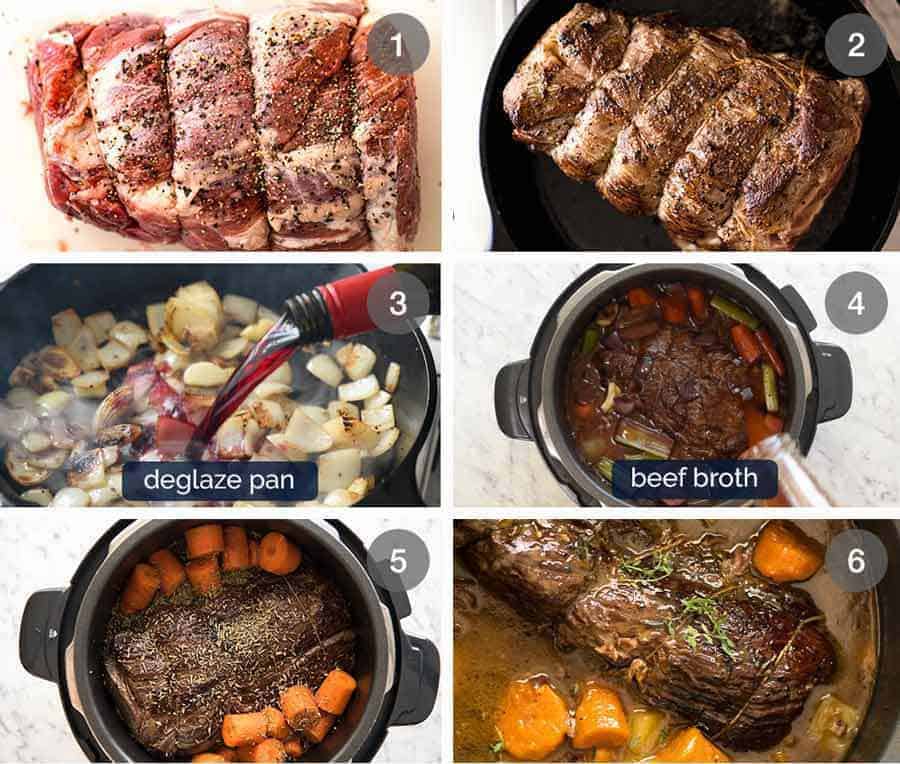 ABOUT THIS SLOW COOKER POT ROAST

The typical slow cooker pot roast involves searing the chuck roast (do not – I repeat, do not skip this step! Key for flavour base!) which is then placed in the slow cooker along with vegetables and beef broth plus sometimes wine, and some herbs for flavour.

The two little-but-big things I do differently for this slow cooker pot roast recipe are as follows: 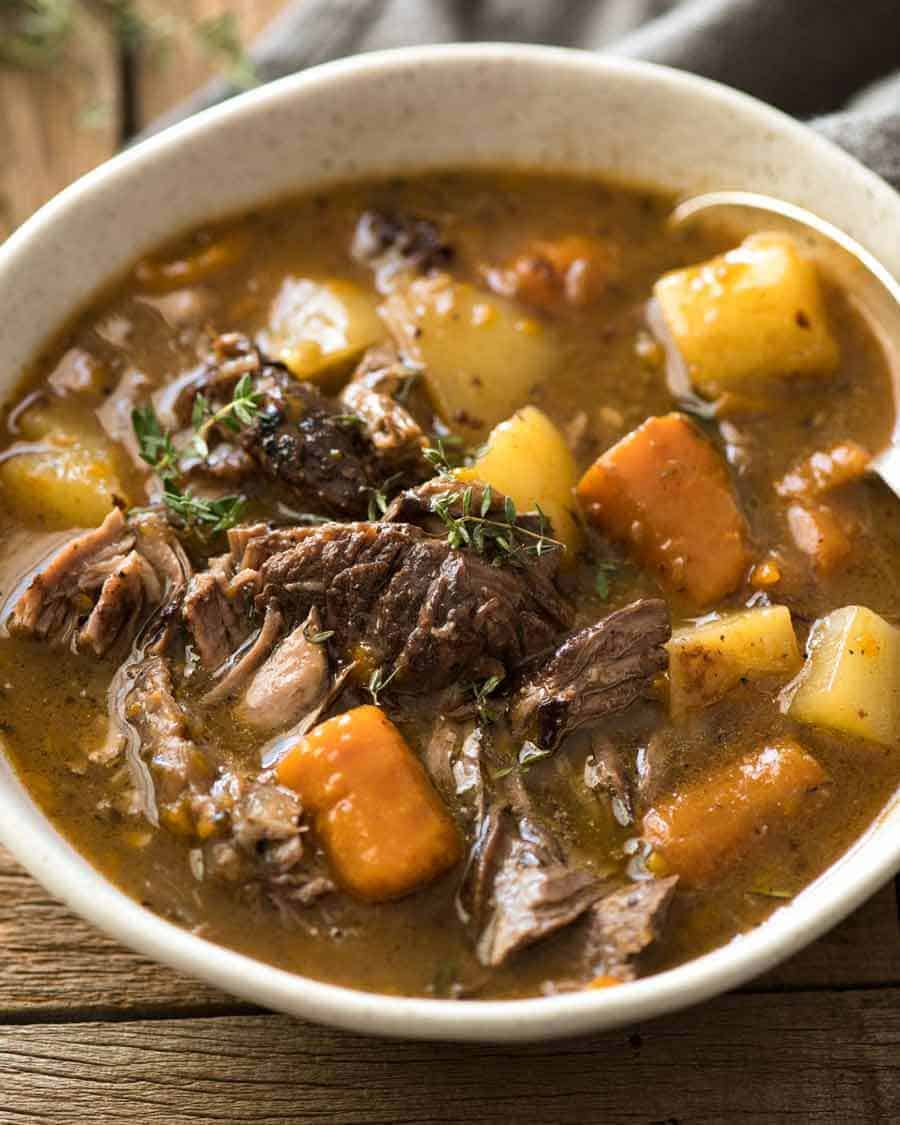 Because I make this pot roast in a slow cooker, this ends up with tons of sauce. You need enough broth for the beef to be mostly submerged in liquid, but because there’s no evaporation and the beef also releases juices, you end up with lots and lots of liquid.

Which means, in my version of Pot Roast, you end up with lots and lots of gravy.

Not a bad problem to have, hmm?

Also I just realised – this is a SLOW COOKER Pot Roast recipe, and yet I shot it in a casserole pan in the photo below. I don’t have a serving platter that’s deep enough to hold all the sauce, so I had to improvise, but looking at it now, it’s a bit misleading. Oops! – Nagi x 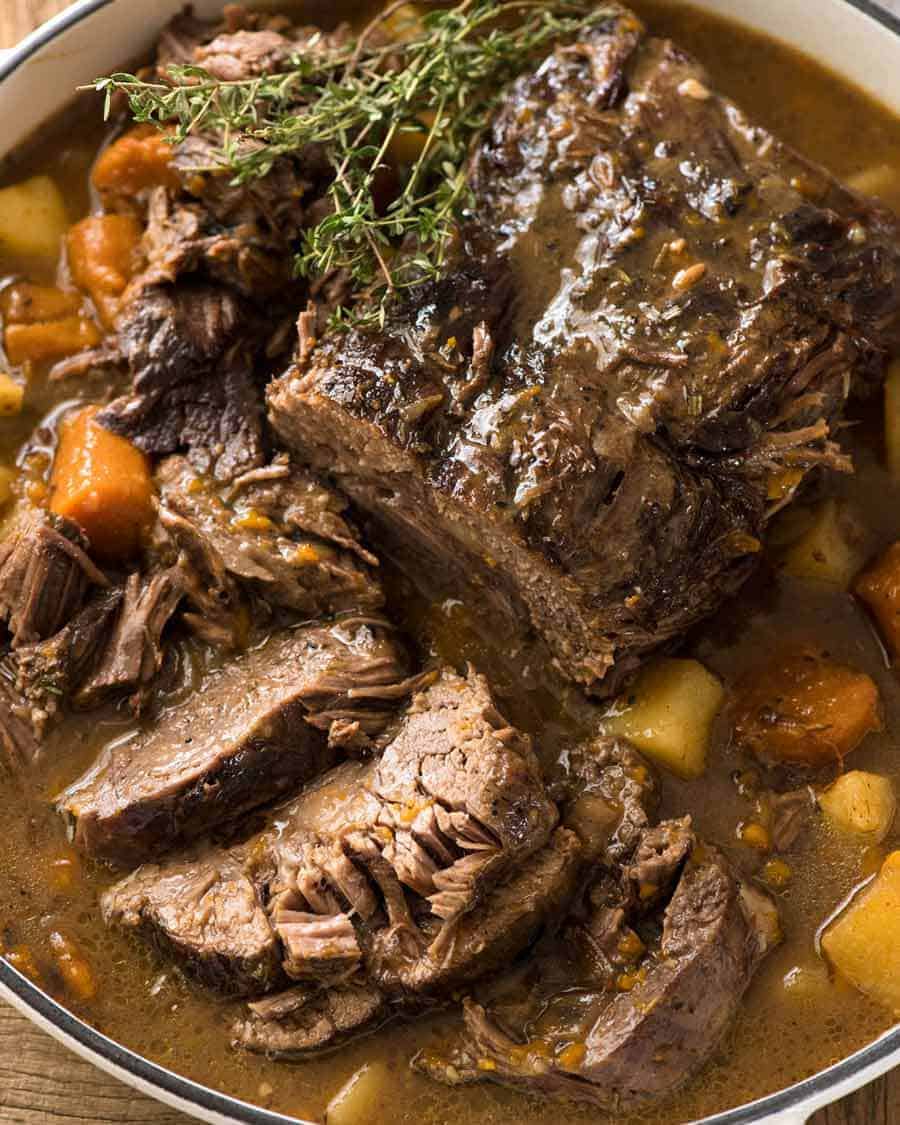 Sometimes, it’s helpful to have a visual so watch me make this Slow Cooker Pot Roast! Note: My slow cooker looks like a pressure cooker because it’s a multi function slow cooker (but no, it’s not an Instant Pot!). 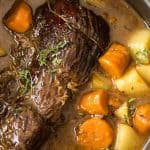 Recipe VIDEO above. The ultimate one-pot family meal! Meltingly tender slow cooker beef and vegetables smothered in a gravy-like sauce (because I prefer that to just watery broth). I like to make this in my slow cooker but I’ve also added directions for pressure cooker, stove and oven.

1. Beef chuck is a slow cooking cut of beef. It sometimes comes rolled and tied with string (like pictured in mine) – this is when the chuck is thinner. But it also comes much thicker, shaped like a normal roast cut, and this cut isn’t required to be rolled and tied like mine. Both work great for this recipe.

The recipe has a wide range for the beef weight because this recipe makes so much sauce irrespective of beef size, because you need a certain amount of liquid to partially submerge the beef. The cook time remains the same because it’s driven by beef thickness, rather than weight. Feel free to reduce / increase vegetables to your beef size, and also add other vegetables.

OTHER BEEF CUTS: This works great with brisket too. Blade Roast will also work but note that the beef is very lean so while it will be tender like chuck, it’s not as juicy inside (which you can disguise by smothering with sauce).

2a. Smashed Garlic – just use the side of your knife and smash it using the palm of your hand. The garlic will burst open but remain mostly in one piece.

2b. Cornflour / cornstarch gluten free alternative: Mix 1 tbsp cornstarch / cornflour with a splash of broth, mix then pour in per recipe, in place of flour. Once beef is cooked and removed, check liquid thickness. If you want it thicker, mix 1 tsp cornflour with splash of water and add, heat liquid (residual heat may be sufficient) and it will thicken, repeat if you want thicker. Best to do it this way because cornflour thickening power is stronger than flour and the amount of liquid that comes out of beef differs. So start with less, then add more later – cornflour doesn’t need cooking out like flour, as soon as it is added and liquid thickens, it can be consumed.

STOVE: Add 2 more cups of water, simmer covered 2 – 2.5 hrs until meat is starting to be tender, turning meat once or twice. Add potatoes then cook another 30 minutes until meat is super tender and potatoes are soft. Keep an eye on water level.

3b. I add potatoes later otherwise I find they are so soft, they basically disintegrate. If you prefer to add potatoes in at the beginning so you don’t have to worry about adding them later, use red potatoes because they hold up better to the long cook time.

4. The carrots and celery are VERY soft by the end. It’s unfortunate, but a necessary sacrifice because having them in the broth for the whole cook time adds great flavour to the sauce. 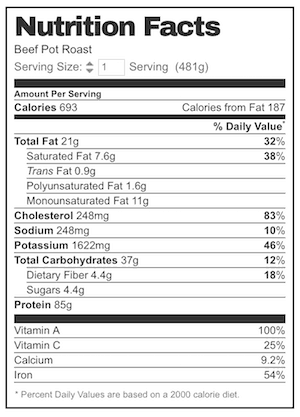 When the homeless man at the dog park isn’t at his car (usually off tending to the park grounds – best groundskeeper EVER!), I tie food to the boot of his van. Pot Roast, in this case!

And this is Dozer, trying to figure out if he can reach the bag. #SHAMELESS 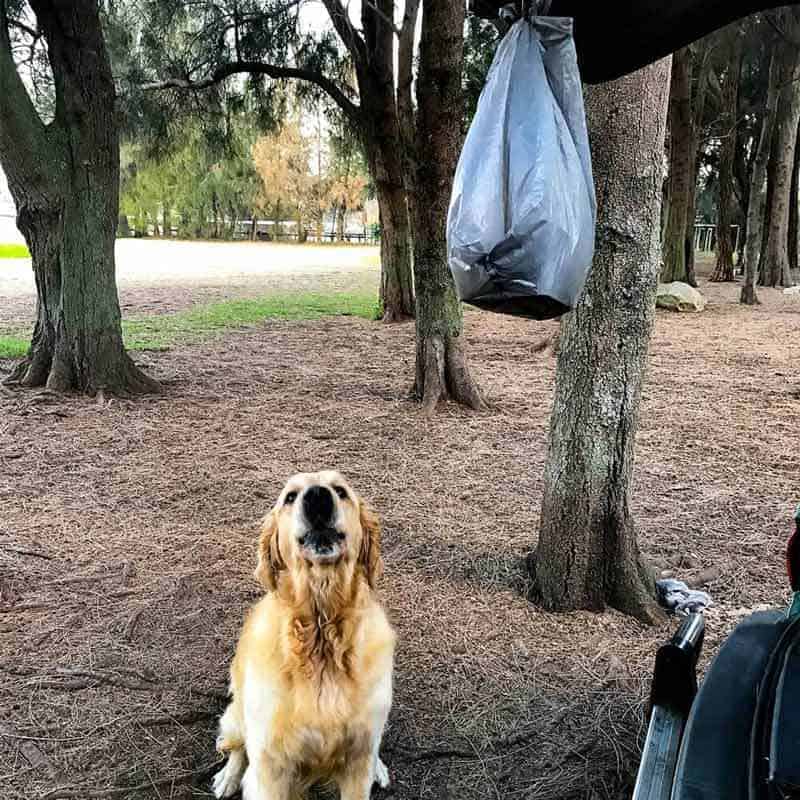