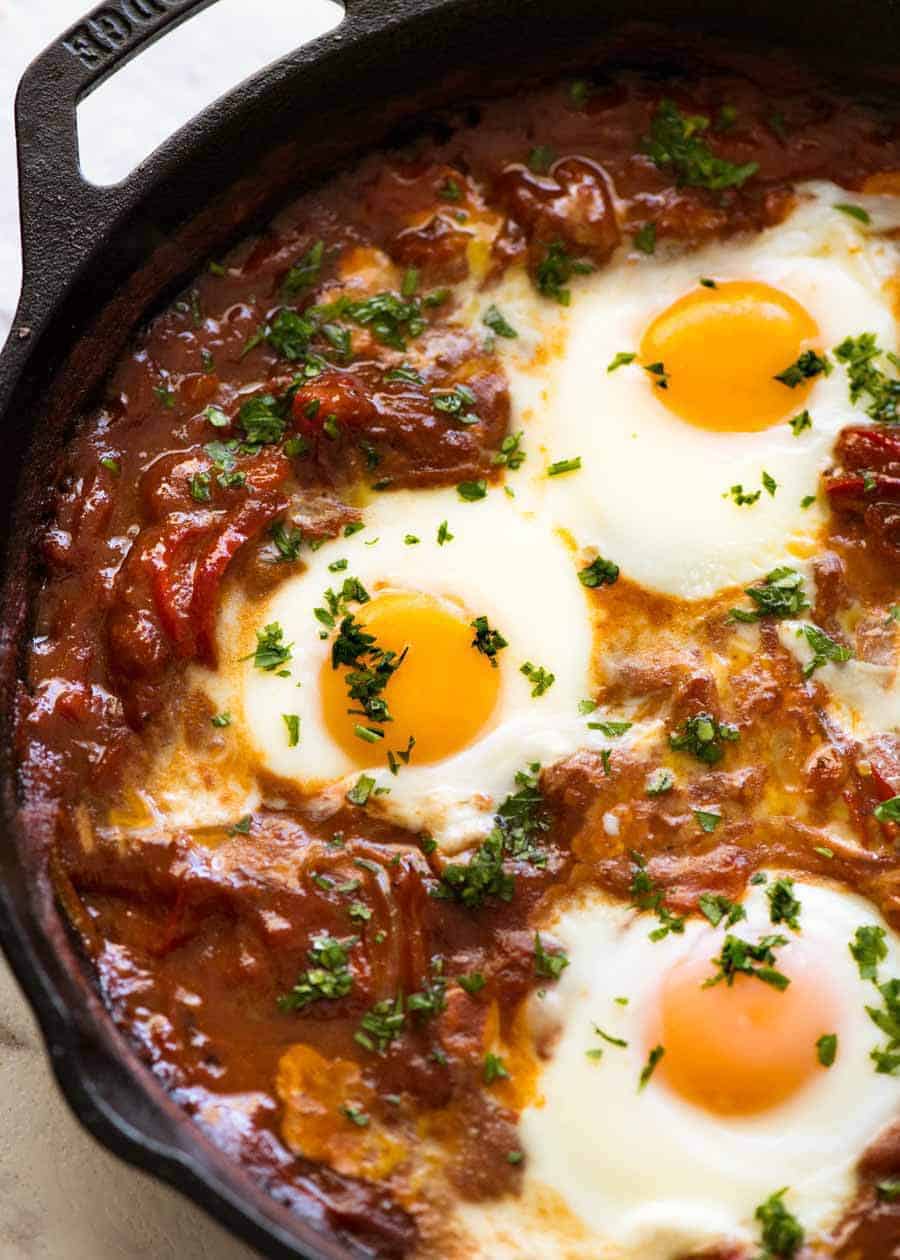 The best baked eggs in the world – Shakshuka! A Middle Eastern and North African dish traditionally served up for breakfast or lunch, this can be made entirely on the stove or finished in the oven. However, bread for dunking/mopping is not optional!

I’ll let you in on a trade secret – usually, the photos you see of so called baked eggs aren’t really baked at all. When eggs are baked, the thin film of egg whites covering the yolks becomes opaque, fogging up the beautiful bright yellow yolks.

“This is a catastrophe!” said some food magazine editor, somewhere. “We cannot have foggy yolks! They must be bright yellow. This must be fixed!” (I hear this in my head with a French accent, but I don’t know why)

And so some food stylist or food preparation person scuttled off, and came back with a solution now adopted by food stylists everywhere: pan fry the eggs sunny side up then slide them into whatever sauce or vehicle they were supposedly baked in.

It’s always obvious when this is done because you don’t get the messy bleed of whites mixed in with the sauce, like you see in these photos.

So yes, I sacrificed glaringly yellow yolks to make this the way the recipe is written. I did cheat a bit though- I carefully wiped off as much of the egg whites from the yolks before baking them.

I assure you I do not do that in real life. 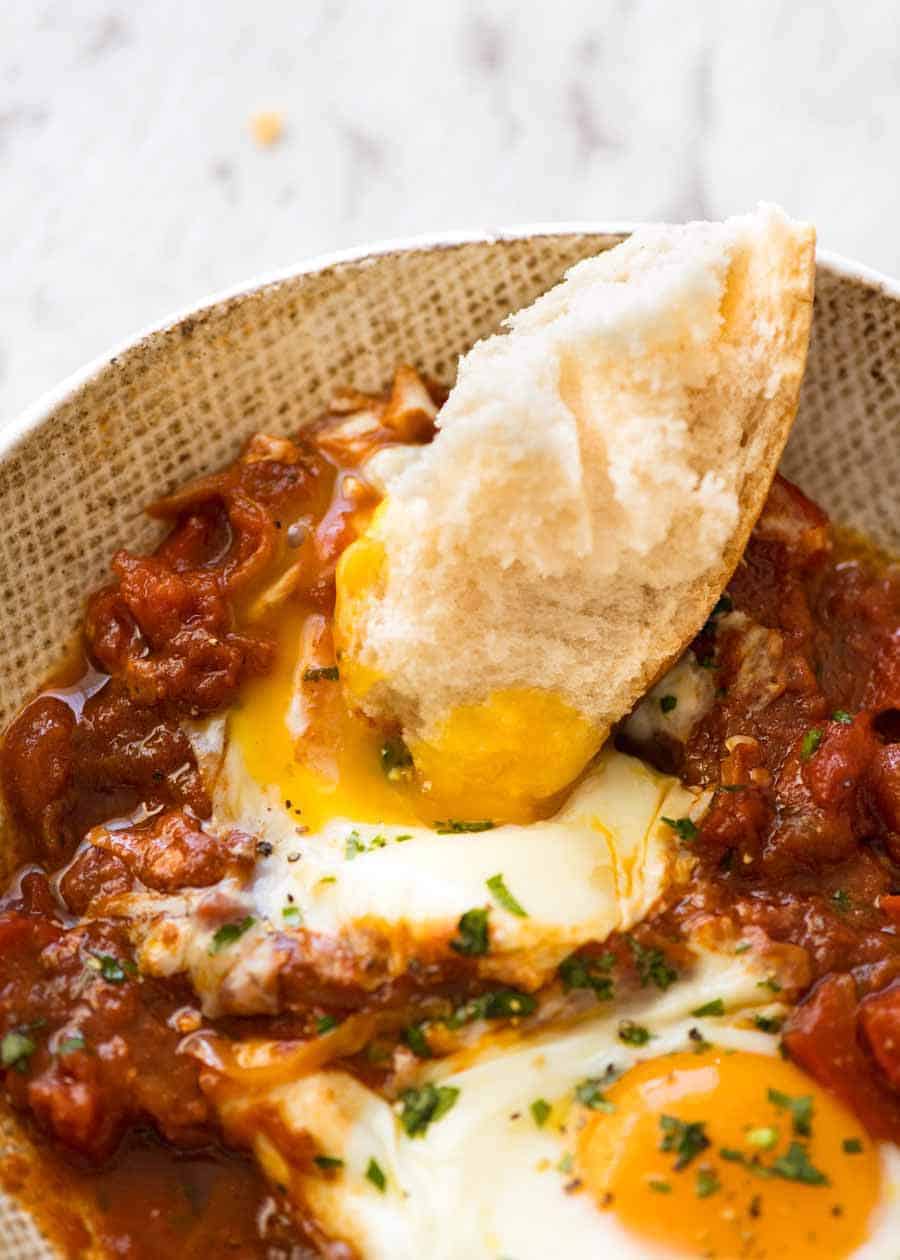 It’s basically eggs that are baked or poached in a fragrant tomato sauce, usually with capsicum (bell peppers), onion and spices like cumin and paprika, reflecting the Middle Eastern and North African roots of this dish.

Though traditionally thought of as a breakfast or brunch recipe, I’m forever on my “eggs anytime of the day” crusade and I’m sitting here at 5.18pm on Wednesday 25 July 2018, wondering what to have for dinner tonight and I just decided to make this (again). 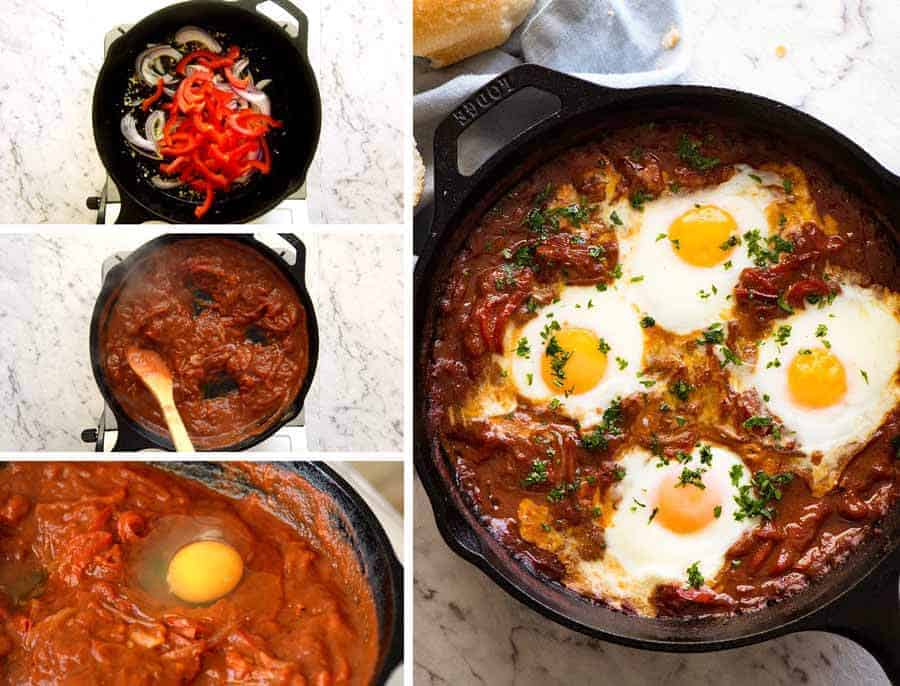 BRILLIANT FOR CAMPING – AND MAKING IN BULK

Though I call Shakshuka a type of baked eggs, ironically my favourite way of making it is over campfire, poaching rather than baking. One of my best friends had a remote wild-river wedding and the outdoor caterers they hired made Shakshuka for 80 wedding guests over campfire.

It worked brilliantly because eggs take mere minutes to cook, so they made large pots of this fragrant tomato sauce then cooked dozens and dozens of eggs in them. Poach, serve, then repeat in the same pots.

I had all good intentions of helping. But I had a very sore head that morning 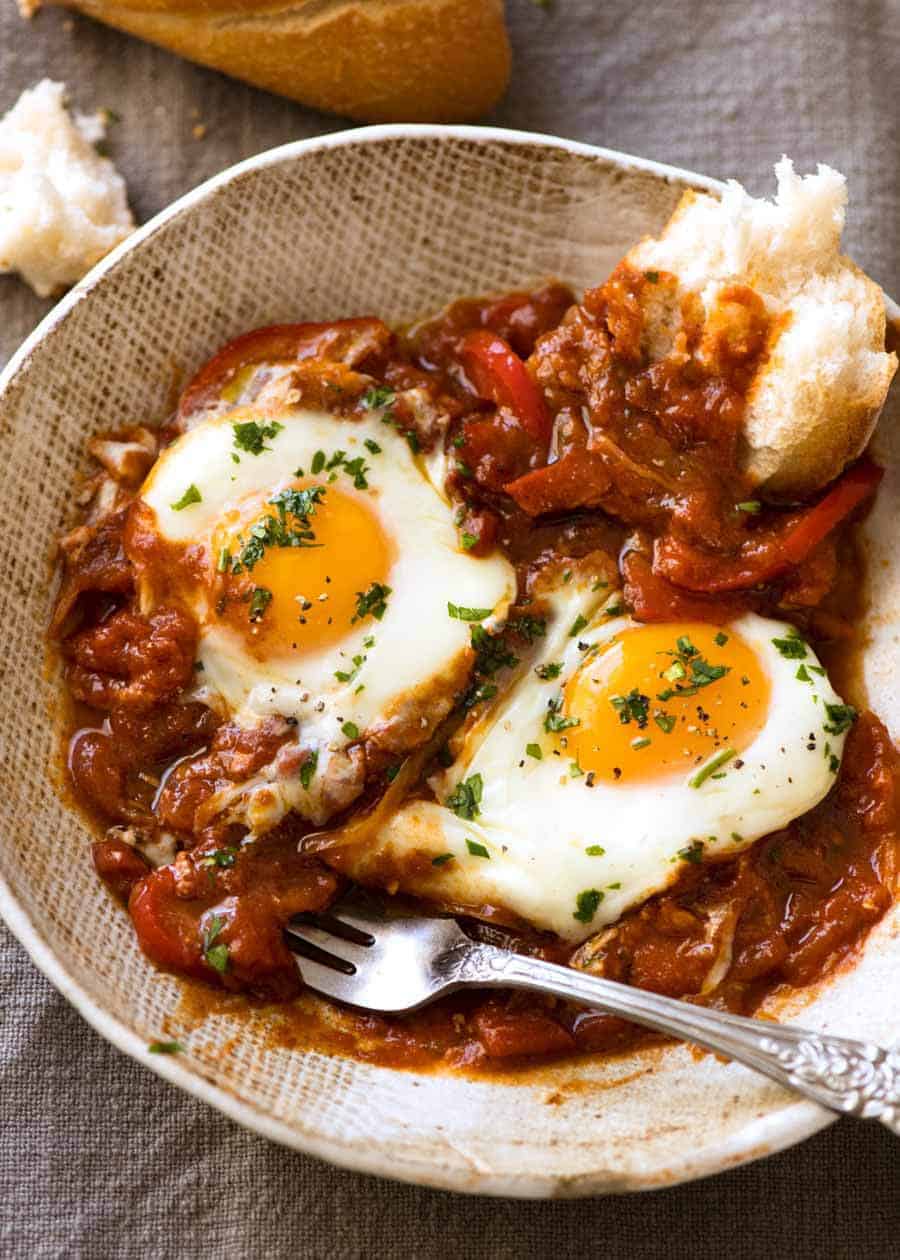 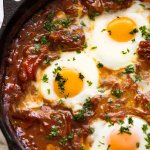 Recipe video above. I call this the best baked eggs in the world, but they can also just be poached on the stove! With Middle Eastern and North African roots, the tomato sauce is lightly spiced and used as the bed to cook the eggs. PS Crusty bread is a must. PPS Recipe lends itself to great variations – see recipe notes.

1. Baking eggs perfectly so you get runny yolks but the whites are just set rather than jelly-like (ie still a teeny bit raw) is actually a bit of an art. My way of getting around this is to leave the eggs to cook in the mixture for 1 minute before transferring to the oven. This gives the whites a bit of a head start without affecting the yolks.

2. Variations – this recipe lends itself to a great many variations. Try substituting the capsicum with other vegetables such as zucchini (courgettes), eggplants (aubergines), or even carrots or fennel. For a baked beans-ish spin (that’s breakfast baked beans, as Aussies and Poms know them, not American baked beans), try adding white beans. Try adding olives, or other antipasto-ey things (artichokes, sun dried tomatoes). For a Mexican spin, use corn and black beans!

3. This recipe as written makes 2 very generous servings (2 eggs per person) (this is what the nutrition reflects). But there’s enough sauce here for 3 servings if you can squeeze 6 eggs in. I opted to just use 4 here so you can actually see the sauce in the photos and video. 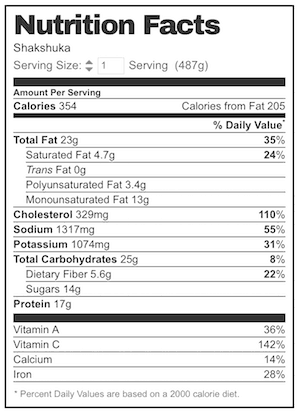 Original recipe published in May 2014, officially one of the very first recipes I ever shared. So it’s 4 years overdue for new photos and a video! Recipe slightly tidied up but is fundamentally the same.

And he’s back in the water!!! The vet tells me it’s excellent for rehab*. So I’m making him do laps back and forth along the beach – not allowed to run on the sand!

* For those playing catch up: Dozer busted his knee a couple of months ago and had to undergo surgery. We’re 8 weeks into a 12 – 16 week post op recovery period. He’s doing fantastic! A little too well – if he had his way, he’d be bolting after rabbits in the backyard, then he’d end up back on the operating table… 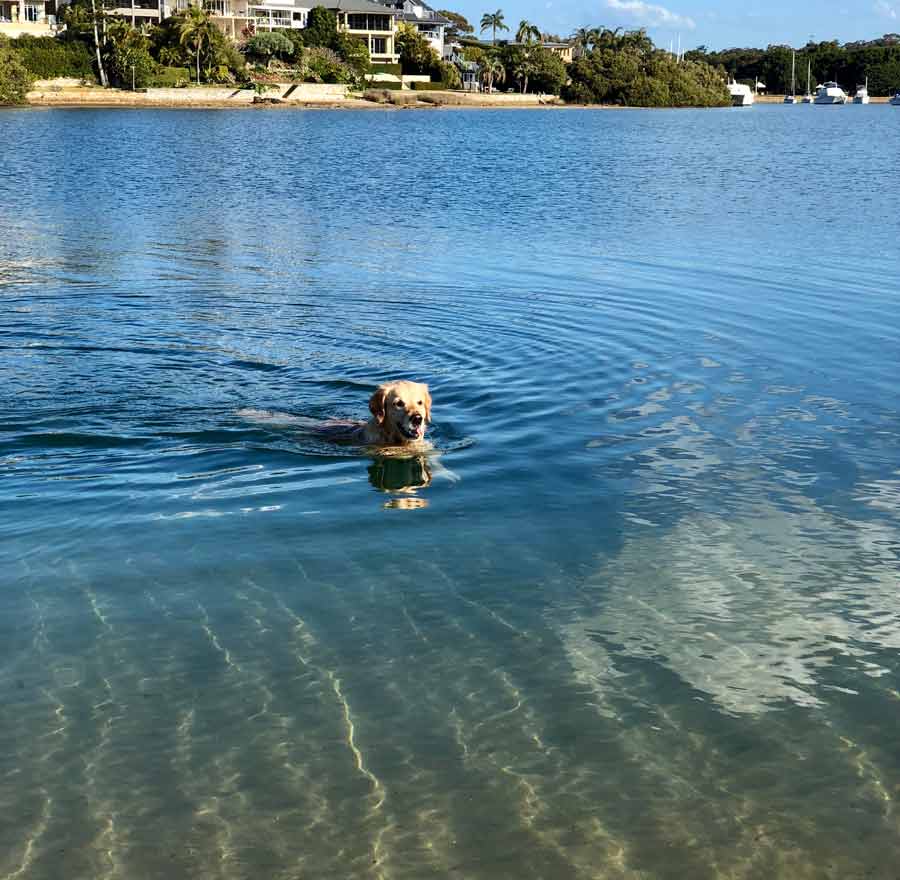