It’s been almost five years to the day since I first posted this Easy Sesame Chicken, and I felt it was about time for me to pay it a visit. I’ve learned a lot since 2013, like a lot a lot, so I tweaked this classic recipe to make it even better and solve some of the issues that readers have encountered over the years.

This Easy Sesame Chicken is seriously so easy that you’ll be tempted to toss those take out menus. The delicious sauce takes only a few ingredients, all of which you can keep on hand indefinitely (keep your ginger in the freezer). You know, just incase you need some sesame chicken like, now. Oh, and this take-out fake-out sesame chicken works great for your weekly meal prep, too! 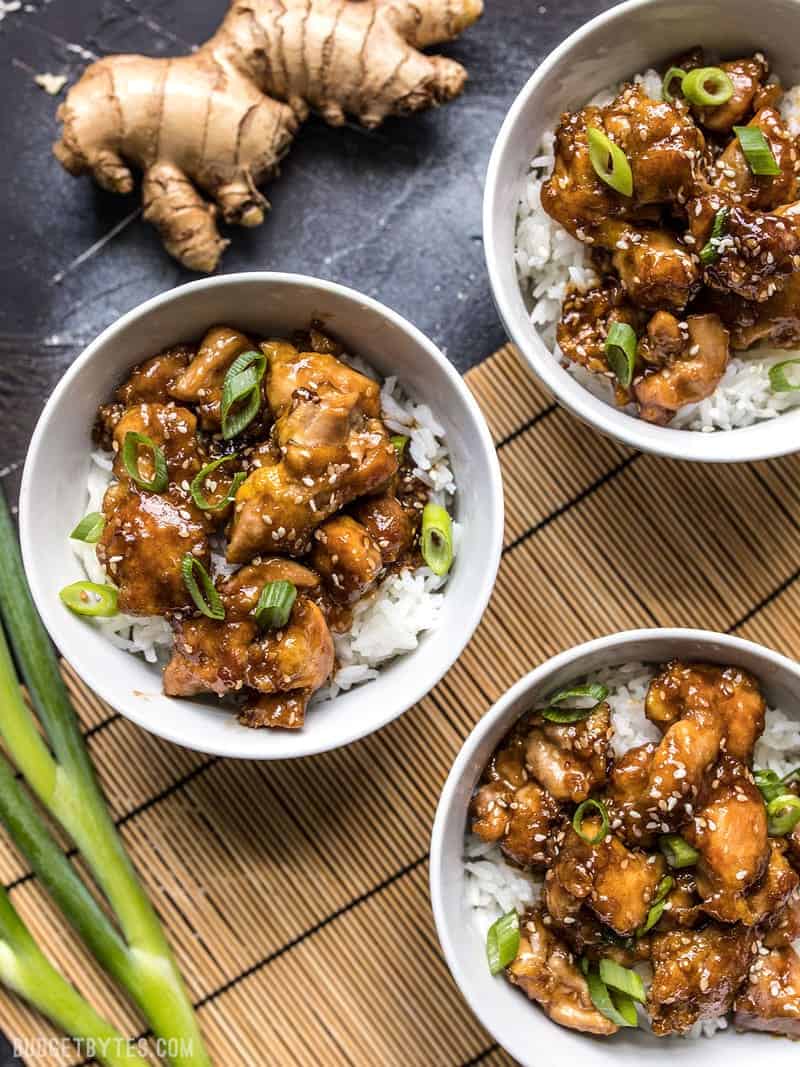 So what did I change to make this recipe better? First, I doubled the sauce because the reviews almost unanimously agreed that it needed to be more saucy. Second, I rebalanced the flavors in the sauce. They’re the same ingredients, just a little more in balance. And lastly, I reduced the cornstarch in the sauce so that the texture of the finished sauce is a bit more smooth and doesn’t seize up quite as much. I hope you love the new version as much as I do! But if not, you can download the printable version of the old recipe here. 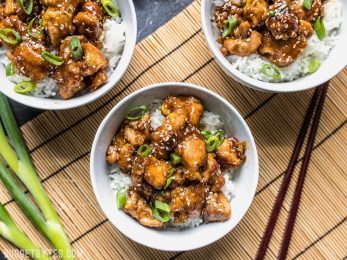 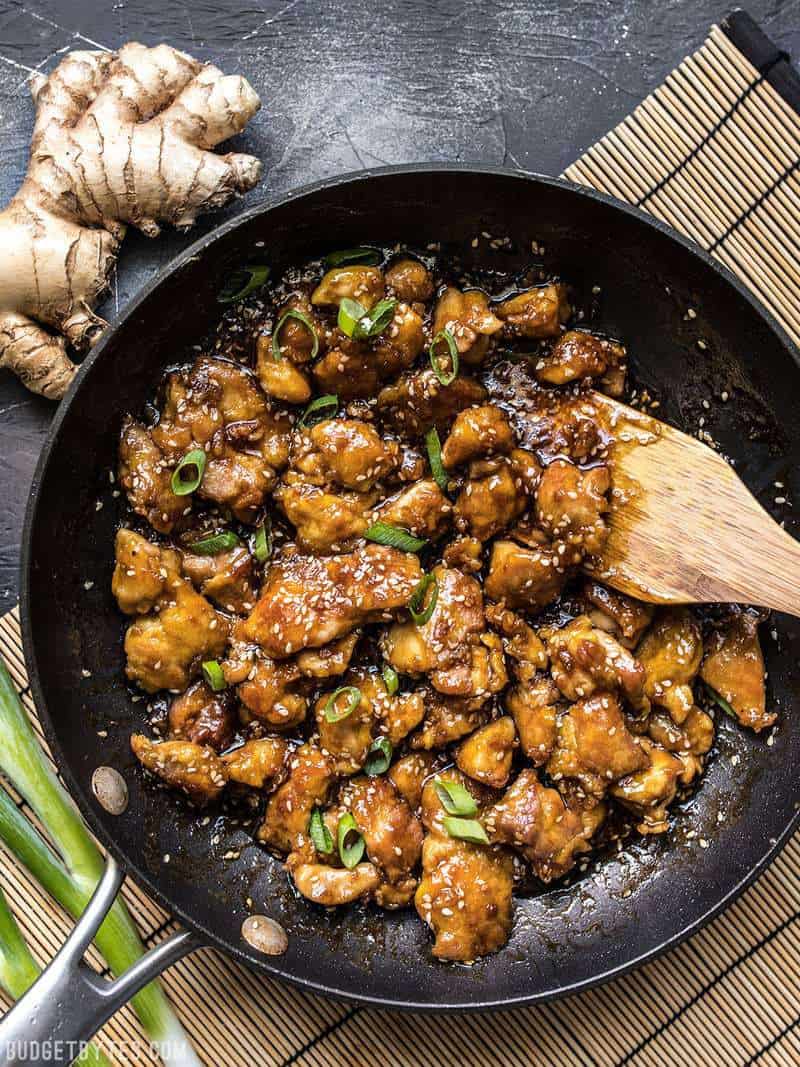 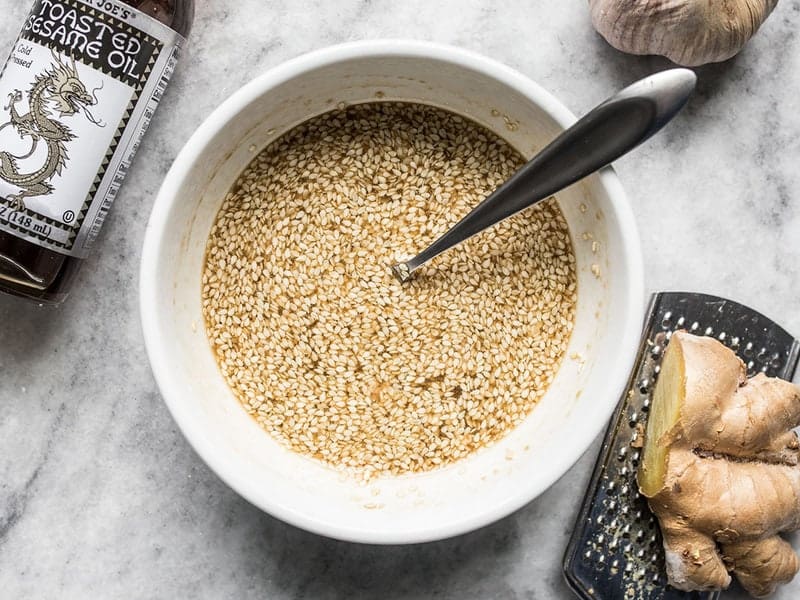 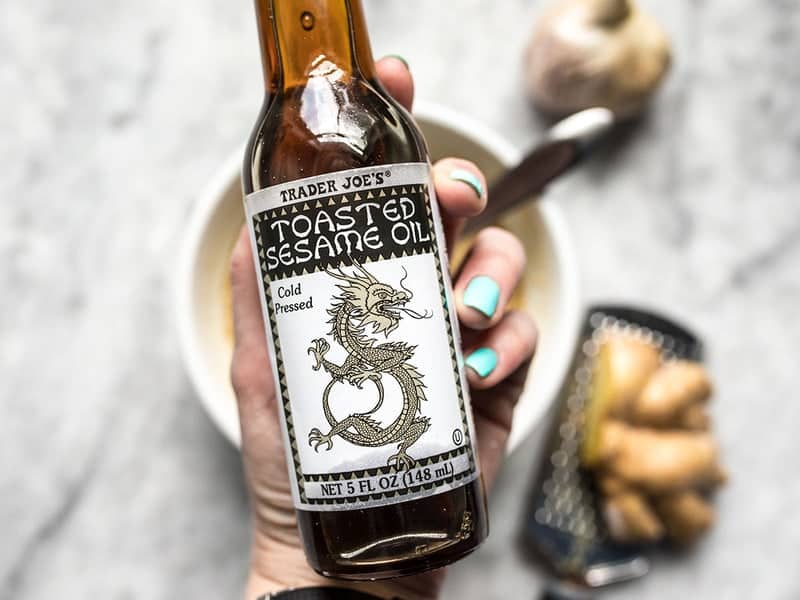 Let’s just talk about this toasted sesame oil for a second. You must get the kind that is toasted to get the super vibrant nutty flavor that you want in your sesame chicken. Not all brands actually say “toasted” on the bottle, but you can recognize the toasted variety by its deep brown color. Regular sesame oil will be the color of straw, like vegetable oil. You want the brown stuff. 😉 It’s usually in the international foods aisle, instead of the baking aisle with the other oils. 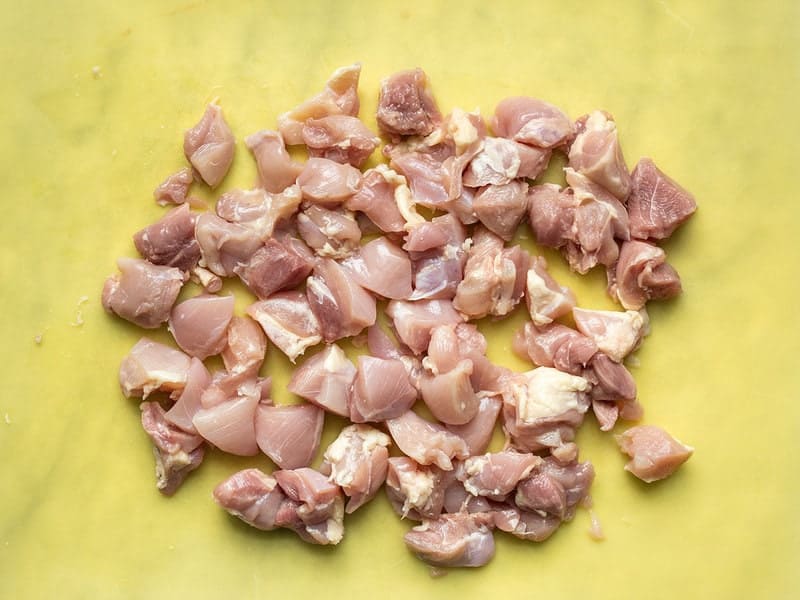 Next, trim any extra fat off of one pound of boneless, skinless chicken thighs, then cut them into small one inch cubes. One pound for me was about three chicken thighs. 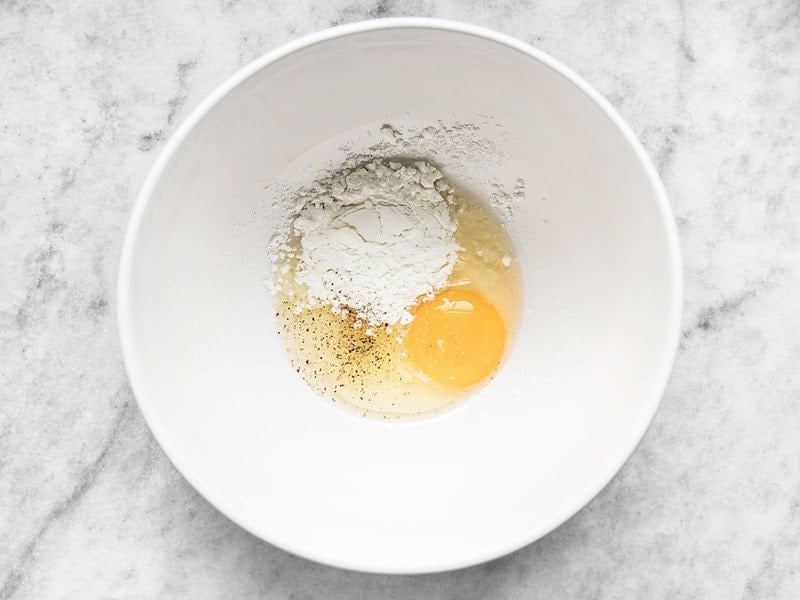 Add 1 large egg, 2 Tbsp cornstarch, and a pinch of salt and pepper to a medium bowl. 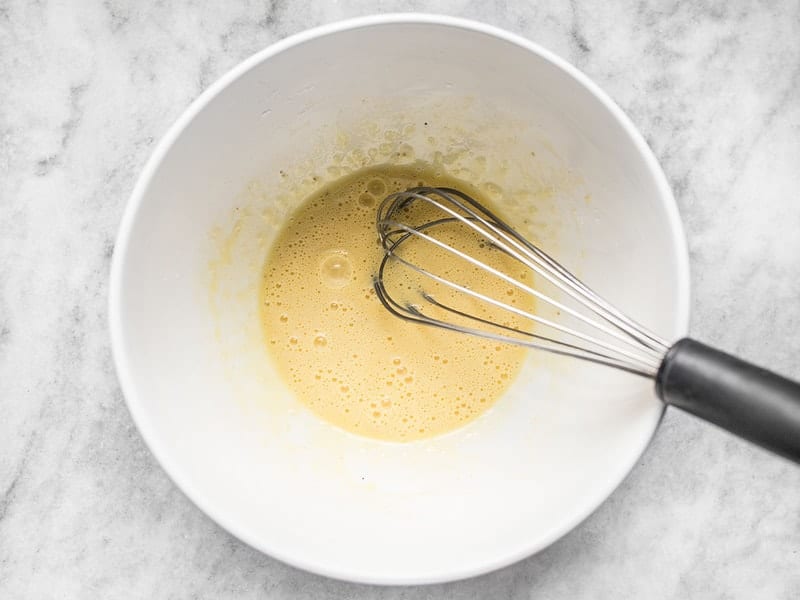 Whisk the egg and cornstarch together until it is light and frothy. It may seem thick at first, but as the cornstarch dissolves in the egg, it will thin out and get nice and frothy. 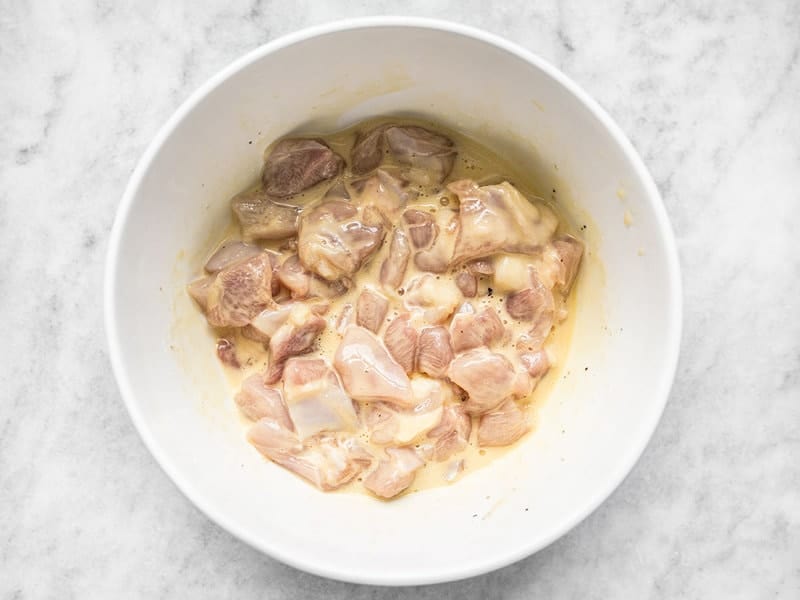 Add the cubed chicken thighs and stir them to coat in the egg mixture.

Add 2 Tbsp cooking oil to a large skillet and heat it over medium. Wait until it is very hot. This is VERY important. The skillet must be very hot! Once very hot, swirl the skillet to make sure the oil coats the entire surface, add the chicken, and make sure it’s spread out into a single layer. Let the chicken cook, undisturbed, until golden brown on the bottom. It will kind of cook into a single round pancake, but don’t worry, we’ll break up the pieces next. 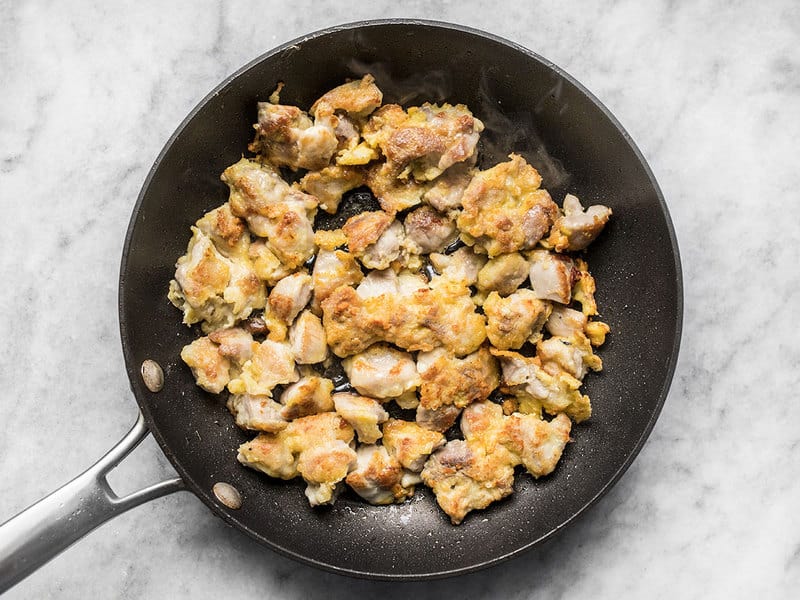 Then carefully flip the chicken pieces, breaking up them up slightly into smaller pieces as you flip. Cook on the other side until browned and cooked through. Make sure to not stir them too much, or you can cause the egg to come off the chicken. You can see that some of the chicken pieces are still kind of stuck together at this point. That’s okay. Just do not over stir. 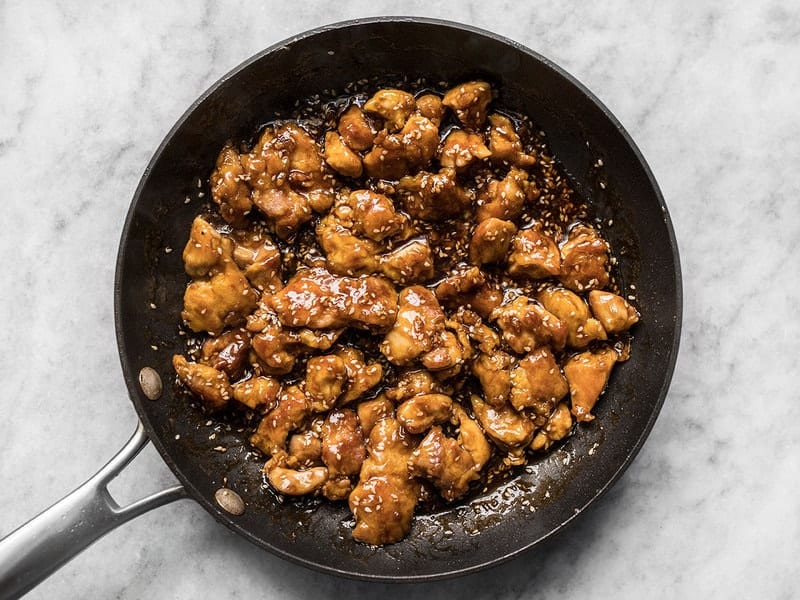 Finally, add the prepared sauce and stir to coat. Continue to carefully stir the chicken as the sauce beings to simmer and thicken. Once it’s thickened, turn off the heat. 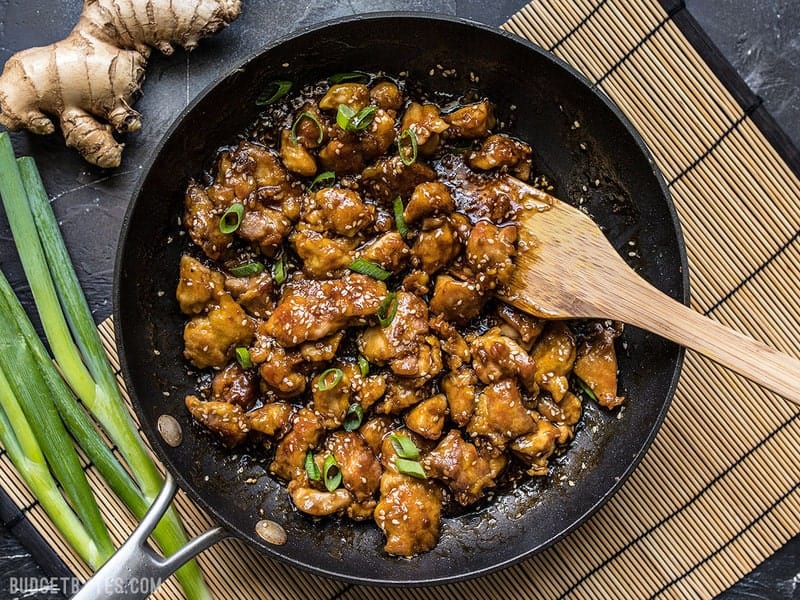 Sprinkle some sliced green onions over top and serve with warm rice. 🙂 Doesn’t get better than this. 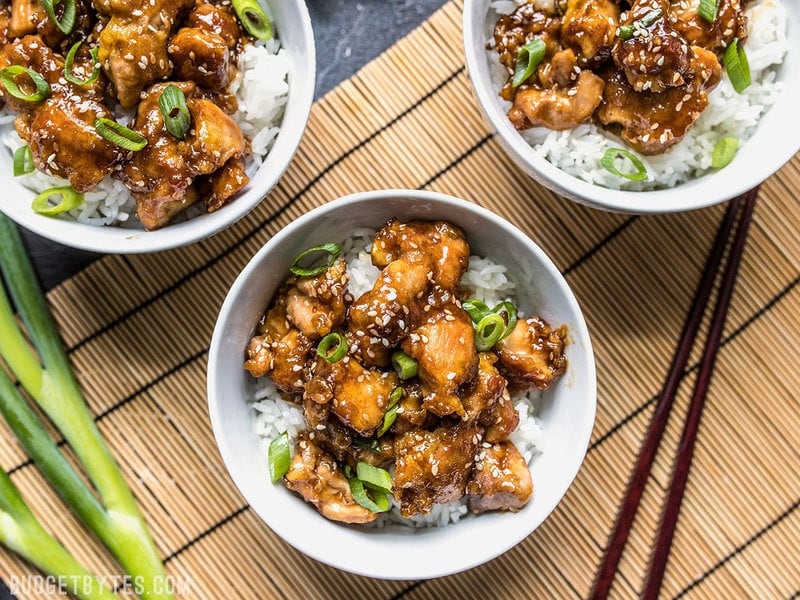 Easy Sesame Chicken – done in about 30 minutes, and NO DELIVERY FEE! 😀